The fourth season of Raven’s Home came to a conclusion tonight with two brand-new episodes on Disney Channel, plus a special short told with puppets called Far Away from Raven’s Home. The show hasn’t officially been renewed for a fifth season yet and something about the ending of the last episode feels like it could be a fitting series finale if Disney chooses to end it here. Since there’s a lot to cover this week, we’re presenting abbreviated recaps of all three Raven’s Home projects that aired today.

Saved by the Belle 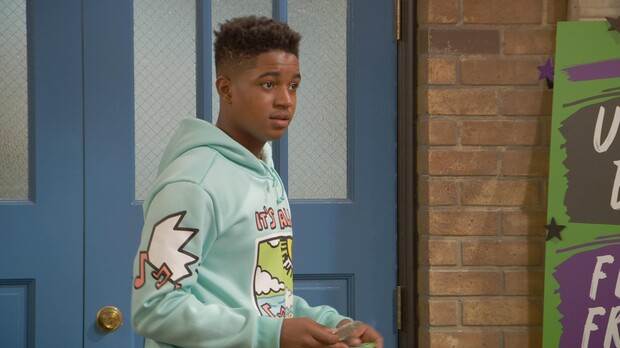 Levi wants a bigger TV, but Raven tells him the one they have is fine. Booker is dressed fancy because the class is voting on monikers for the yearbook and he’s hoping to get “Freshest Freshman” in addition to similar titles for the rest of high school. At school, Ramon tells him that he’s in the lead for the title on Friend Space and he has a vision of a girl saying “Wow! Booker just saved that kid’s life!” He runs to Nia to tell her what he saw and she finds out that she’s been nominated for “Most Liked By Parents,” which offends her.

Booker remembers that another student won “Freshest Freshman” by performing during the lunch hour, so he decides to do it too. Levi brings him a microphone and uses his phone to record his performance. When people ask for an encore as he takes a bite of hot dog, he ends up choking and Nia gives him the heimlich maneuver. Everyone sees Nia save his life and she suddenly becomes popular, taking Booker’s lead on Friend Space for “Freshest Freshman.”

Booker soon finds himself at the bottom of the poll for “Freshest Freshman,” but at the top of a new title, “Most Likely to Get Saved By His Sister,” which offends him. Booker is jealous of Nia’s newfound popularity and hatches a plan to save her in front of everyone to even the playing field again. The next day at lunch, Nia pretends to choke and when Booker gives her the heimlich, she releases some fries from her hand. A girl sees it and tells everyone that it looks like they faked it.

Left with no other options, Booker decides to just be himself and when another student chokes, he’s at the right place at the right time to save him. His real vision comes true, but he no longer cares about the title, telling everyone they should vote for Nia or Ramone instead of him. Later, he finds that he’s at the top of the list for “Most Inspirational.”

While all of this was unfolding, Chelsea found an old cigar box full of love letters between a couple from World War II. They become obsessed with them and when the leaders mention pie and s’mores, they go buy some. Levi notices and devises a new plan to get the bigger TV. When they return, they find the last letter on the floor where the couple talks about seeing a movie on the “Big giant screen” and Raven realizes that Levi wrote it. She plays along, pretending that it made her want a bigger TV. Later, he asks when it’s coming and she pulls out a letter where the couple have a fight about the movie. Raven and Chelsea reveal that they know what Levi did and he gets a month of chores as punishment.

In the end, Nia won “Freshest Freshman” and Booker won “Most Inspirational.” Tess, who was out of town, also won “Best Freshman Athlete.”

So You Think You Can Drive 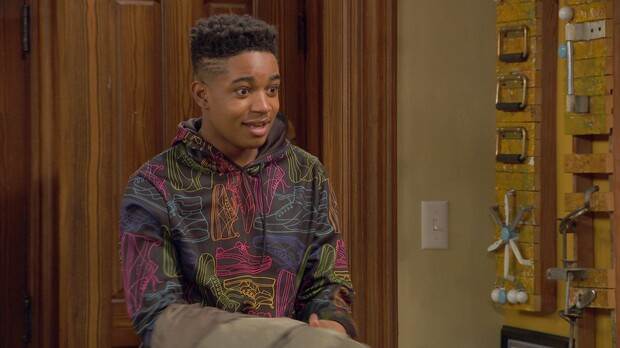 Booker and Nia just got their learner’s permit and they remind Raven that she promised to teach them. Behind the wheel, Raven is stressed because Nia is too slow and Booker drives recklessly. Raven tells them she won’t help them drive anymore and when they ask Chelsea, she screams. Booker and Nia talk about possibly asking their dad when Booker has a vision of him saying “You and your sister are going to do most of the driving.” Booker is excited and also lets slip that he secretly hopes Raven and Devon get back together.

We next see Nia and Booker returning from their first driving lesson with their dad, who flew to Chicago from Texas. They tell Raven how patient he was with them, but when the kids leave, Devon tells Raven that she’s right and he doesn’t think the kids are ready to learn how to drive. When Devon fixes something around the house, Nia comes up with a plan to get him to stay longer by breaking other stuff around the house and asking for his help with a 4-day community project. Nia and Booker continually break things around the house, but Devon starts to catch on when Nia breaks the toaster shortly after Devon fixed it when Booker broke it.

Levi is taking a trip to London to visit his grandparents and while Chelsea helps him pack, he uses his fake British accent. She realizes he needs to learn more about London so he doesn’t offend anybody, so she sets up a cardboard London on the roof to give him a tour and help him learn more about the culture.

Devon tells Raven that he applied for a job in Chicago and they decide to go out to lunch together. While they’re out, Booker uses a ladder to try and break something on the ceiling, but he falls off and badly hurts his leg. Chelsea comes in from the roof and trips over Booker, hurting her ankle. They both need urgent care and Nia tries calling Raven and Devon, but neither answers their phones. She ends up driving them both to urgent care.

Raven and Devon get back to the apartment and find that Levi is the only one home. They see their messages and head to urgent care with Levi to see how Booker and Chelsea are doing. With both on the mend, Devon shares the good news that he got the job in Chicago and will be moving. Booker and Nia are excited, but it’s also clear that he and Raven are not getting back together.

Levi and Chelsea are at the airport as Levi is about to fly to London. Raven and Devon come around the corner wheeling Booker in a wheelchair with Nia following. Nia and Booker are flying to Texas with Devon to help him move. “You and your sister are going to do most of the driving,” he tells them, fulfilling Booker’s vision. Raven and Chelsea end up alone and Chelsea suggests that since they’re already at the airport, they should go somewhere fun. They end up on the roof of the apartment building where Chelsea’s little London is still set up. They sit together at a table drinking tea and Chelsea says “Who would’ve thought we’ve wound up back together here after all these years.” Raven responds, “Yeah, you have your vision all worked out, but then life has other plans.” Quoting the show’s theme song, Chelsea adds “Tell ‘em, Ray!” Raven’s phone begins to ring and Chelsea asks if she’s going to answer it. “No, not right now. Raven is not home.”

Far Away from Raven’s Home

In this 10-minute short using puppet versions of the Raven’s Home cast, Raven and Chelsea take a trip with the kids to an island called “Nosuoh,” inviting Tess along too. Everyone has their own expectations from the vacation, but Booker is hoping for an adventure like his hero, Artifact Jack. In the jungle with a tour guide named Danny, Booker has a vision of Danny and a mummy holding him up in celebration as Danny says “You saved us!”

Danny tells the family of a legend that someone would save the people by returning the statue of “Batari.” He tells them they’ve been chosen and Booker thinks it’s about him. Danny disappears and Booker finds an old treasure map inside his Artifact Jack book that leads them to an ancient temple. They end up on a booby trap that leads them into a dark pit full of spiders and snakes. Nia claps her hands and the torches illuminate. Levi and Chelsea find some mummies and make friends with one when he helps them get out of another trap.

Down a corridor of snakes, they find the “Batari” and use Tess’ basketball to swap places with it to avoid any more traps. When they get back outside, they find Danny who picks up Booker with the mummy and says “You saved us!… Almost” It turns out he was actually talking to Nia as the legend spoke of a girl who would restore the “Batari.” Hi gives Nia a crown and tells her she needs to find a rhythm to restore the light to the island. The gang sings a song called “One With the Beat of the Drum” and the light comes back. Tess notices that “Batari” sounds like battery.

You can watch Far Away from Raven’s Home on YouTube: