Marvel fans are still buzzing about Black Widow after its release both in theaters and on Disney+ with Premier Access last week. After a long wait, the Marvel Cinematic Universe is back in full swing and we couldn’t be happier about it. Our own Ben Breitbart had the chance to speak with Olga Kurylenko, one of the stars of the new film, about her role and her experience on set. 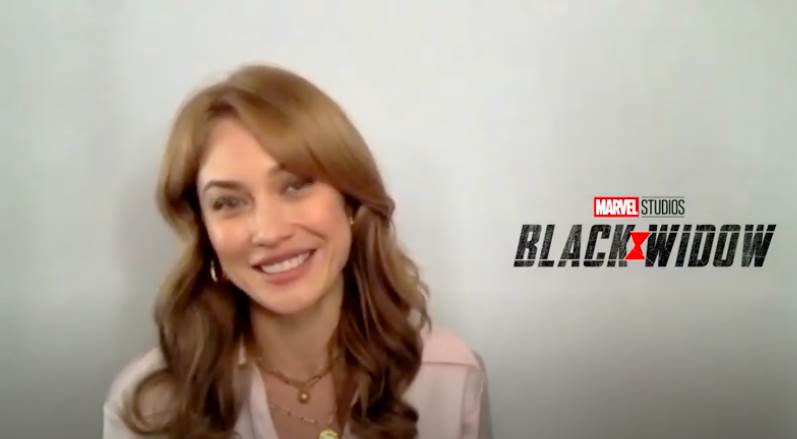 Ben: So I guess the first question is what does it feel like now to finally be able to talk about your role in the film and not have it be a secret, and no speculation? You can actually be open and honest for the first time in quite some time, I imagine.

Olga Kurylenko: Yeah, it feels good and exciting. And it's true, it's nice to be able now to talk about it. And it's all out there. We waited for so long. It was just, quite frankly, it was exciting to see the results for myself. I hadn't seen it throughout all this time, so yeah, it's finally it's here.

Ben: So now that it's out, everyone else in the production kept talking about how Marvel felt like a family throughout the whole process. It's a big movie, but it felt like a small family making it together. Did you have a similar experience? Was making this movie special in that way?

Olga Kurylenko: Well, it feels like a family, but it feels like a rather big family, not a small family because it's a lot of people involved. But very cool too. Like, the crew and the people, my colleagues, all the actors, we had just such great … What's the word? We were just making this altogether and working off each other. And Kate was amazing, also. She was just so gentle, yet she knew how to make things happen, and that combination is really nice. And she was so sensitive. She would react to scenes while watching monitor, and she would come after the cut and be like, "Wow, guys," having tears in her eyes. Everything was so real, and people were living through the scenes before it was even made. And to see that it's working, it's really nice for the actor when people come and tell you that, having watched the monitor, and it's gratifying.

Ben: You have a sort of special place in cinema history, now, I think, in that your character reveal is the first sort of ah moment that we got to experience together in movie theaters, since now, we can go back into a theater across most of this world. Being part of a special sort of secret, was that cool? Was it neat to know that people wouldn't expect your character reveal?

Olga Kurylenko: Yeah, I think it was cool. I mean, because I knew that, eventually, what's going to happen is that everyone's going to discover. And what's cool is that everyone would realize how long it's been hidden from them and that we actually pulled it off. It's quite extraordinary. I find it very cool. I've never had to do anything like that. And actually, I wasn't sure if it was even possible. I thought, "Surely someone will talk somewhere. How do you keep that a secret?" It's too big. The crew is big. There's so many people on set. And even though I had to walk under an umbrella with fabric hanging around, certain people saw me or people knew that it was me, and it's just, how do you keep it a secret? And they managed, and it's extraordinary. It's amazing. And therefore, of course, the reveal is even cooler because it's a huge surprise. It's something that no one expects, and it's always good to have surprises, I think.

Ben: Well, and just to wrap up, as we were building up, this is obviously the sort of a culmination, looking back at Natasha's story, but everyone's been talking about how this movie also looks forward. And without revealing anything that you shouldn't be revealing, are you excited to see where your future with the Marvel Cinematic Universe will be?

Olga Kurylenko: Well, yeah, we would have to ask them what they have planned for the future. But, of course, if I was part of the future, I'd be just delighted.

You can watch this full interview in the video below as well:

Marvel’s Black Widow is in theaters and on Disney+ with Premier Access now.