After Tylor and Duncan accidentally cause a power outage throughout Monstropolis, they go about to cover up their horseplay mistakes in the latest episode of Monsters at Work, now available on Disney+. 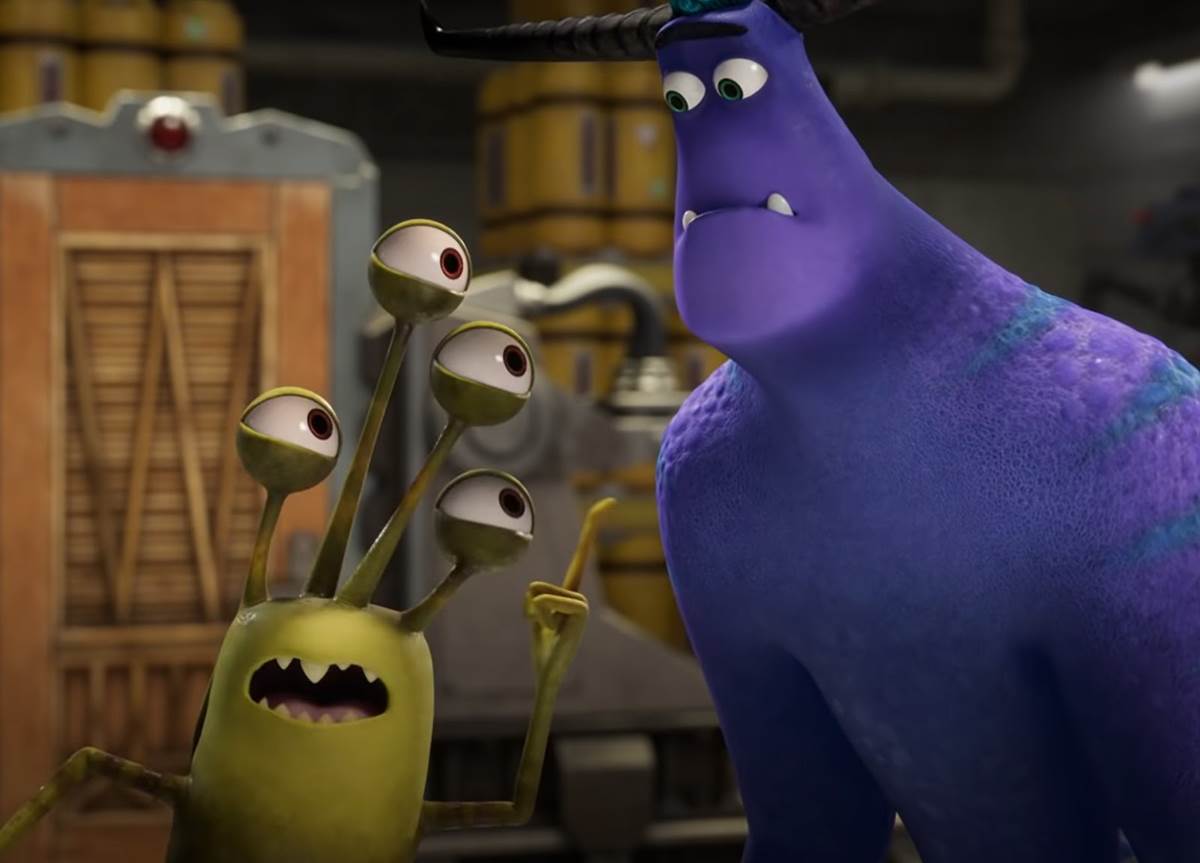 It’s time for Fritz’s vacation, so he visits Needleman’s Vacation Door Emporium where the pair have hidden doors that were supposed to be shredded that lead to “exotic” locales. Fritz chooses a door leading to a condemned beach resort, and he heads to his two week vacation.

Before he leaves, the MIFTers resort to the “Wheel of Temporary Supervisorship” and spin a wheel at random to see who is left in charge while Fritz is gone. While Duncan’s name takes up most of the wheel, the wheel lands on Val, prompting a guilt trip from Duncan including a very theatrical phone call to his mother. While the rest of the team sort of feels bad for the guy, Val nudges the wheel just a bit more so it appears to have landed on Duncan, to which Fritz immediately thinks he made a mistake and names Duncan the temporary supervisor.

As soon as Fritz goes through his vacation door (which stays active down with the MIFT Team), Duncan takes charge with an emphasis on tormenting Tylor, riding him like a horse (literally). After a montage of terror and the phrase “College Boy,” Tylor is on canister duty and Cutter suggests that a damaged valve could knock someone Duncan’s size all the way across a room (wink wink). The prank gets out of hand, and when Duncan tries to retaliate, sets off a chain reaction of exploding canisters that inevitably leads to Duncan and Tylor being blasted into a generator, knocking out power not only at Monsters, Inc, but across all of Monstropolis.

Because power is out across the city, the Monstropolis Energy Regulatory Commission (MERC) is on the way. Not to be confused with Murray’s Eye and Retina Center (MERC). Argus Blinks, a commissioner from MERC is on scene to investigate the blackout and see if the cause might need a change in management at Monsters, Inc. Mike and Sulley greet him in the lobby, where Mike immediately tries bribing him in clever ways. Mike must have some kind of connections, these were all great methods of bribing. Up in their office, Argus opens up a suitcase full of eyeballs that he sets loose throughout the facility to investigate and determine who is responsible for the blackout.

Just as he is about to determine the results of his investigation inconclusive, one of the eyeballs returns after seeing a conversation between Duncan and Tylor where they discuss how to cover the whole thing up. When Argus heads down to the MIFT team, he determines that since Duncan was in charge at the time, he will be the one that gets terminated and banished…until a rogue canister that was wedged in the ceiling comes loose and falls directly on his head. With the active vacation door in front of them, Duncan and Tylor decide (against Val’s better judgement) to try and get rid of the body by sending Argus through the vacation door too and deactivating it. Once they get him out, they realize the suitcase of eyeballs saw everything, so they must now take care of them too.

Fritz is due back from his vacation so the MIFTers need to reactivate the door, and also await the results of their actions against Argus. The door is turned on and Argus immediately comes out, sunburned with tan lines and in a tropical shirt, appearing angry but then TWIST! It was the best vacation of his life and he is grateful to the team. Fritz comes out behind him, clearly having befriended him on the trip, and Argus says that they’re only getting a warning this time for everything that they've done.

Mike and Sulley show up on scene saying everything they’ve done is grounds for dismissal for Duncan since he was in charge. To Fritz’s delight the entire team steps up and takes responsibility and nobody is terminated for what happened. However, they still need to discuss the non-company approved vacation doors that were to be shredded, only to find out Mike was having them moved to his office. Wouldn’t that be nice? A tropical vacation on every break? Yeah, Sulley wasn’t a fan of that idea either.

I would feel remiss if I didn’t point this out. As I’ve said before, this whole series is eerily familiar to the antics of a paper company in Scranton, PA, and this episode in particular feels very much like an episode of that series about a temporary supervisor who takes over and covers up a mistake involving a firearm, only re-written and animated this time. If you’re not familiar with the episode of that series, this is actually one of the stronger episodes of Monsters at Work.

Oh, and as for Mike’s Comedy Class, get ready for a very literal debate about knock knock jokes that results in Mike being escorted out on a stretcher.

This episode of Monsters at Work is now available on Disney+.