Marvel Studios’ Eternals just held its world premiere at Disney’s El Capitan Theatre in Hollywood. Now that the first audience has seen the film, attendees have taken to Twitter to share their first reactions ahead of more detailed reviews being written. Our own Mike Mack was in attendance and here’s what he thought.

Marvel’s #Eternals is an absolute game-changer for the MCU. It’s loaded with pulse-pounding action, twists and turns and some big surprises! pic.twitter.com/jeGGFDkJO2

“Game Changer” is a consistent message in a lot of the reactions.

Holy crap – Eternals is a freaking MASTERPIECE!!! Packed with adrenaline right from the start, but also filled with lots of heart & humor! So many MCU firsts!! Your mind will be BLOWN! Nods to comics but a totally unique story. Those end credits are GAME CHANGERS!! #Eternals pic.twitter.com/jKiMJukn4S

Beautiful and mind blowing, #Eternals is a complete game changer. So many firsts taking place in this one. @kumailn steals every single scene he is in. pic.twitter.com/12lTsCc4Ze

#Eternals: GAMECHANGER. Chloé Zhao does it again! This isn’t just another superhero film, it’s one of the best MCU movies ever! Great performances & really emotional too! A fitting end to Natasha’s journey while also setting up what’s next. @TheEternals #EternalsPremiere pic.twitter.com/0NHMTpQNBF

There’s a lot of praise going around for Oscar-winning director Chloe Zhao.

Though wildly imperfect, Marvel's #Eternals is a beautiful, romantic epic with characters more ancient than you can imagine. Chloé Zhao delivers a sensory experience in a superhero film that captures our natural world like no other. pic.twitter.com/fKuGDCP1U6

#Eternals is a cinematic experience. Zhao delivers something familiar yet so foreign in the best way possible. Greek mythology meets Interstellar meets the MCU. Ensemble is one of Marvel’s strongest. Barry Keoghan is a ROCKSTAR. Slow at times yes, but it pays off. @MCU_Direct

There is some criticism, most of which is about the pacing of the film and the scope of the project.

#Eternals is one of the most ambitious MCU movies yet, but it’s also fairly messy.

Impressive visuals and a talented cast don’t save the convoluted plot. A story so huge, spanning centuries, that it felt like 2/3 of the movie was exposition. It never truly came together for me. pic.twitter.com/syF4x0nTpj

I wanted to like #Eternals much more than I did. There’s a lot to like, but the massive story felt at odds with the intimate character development, leaving me without anything to truly invest in.

There’s some good stuff, but not enough. pic.twitter.com/dolxEaRflp

Still, no one can say that Marvel Studios was playing it safe with this release.

#Eternals is a BOLD direction for Marvel as they embrace the maturity of their universe. While I did find some parts slow, the films scale is something to behold. Ensemble action sequences like you’ve never seen before.

Watch it in @IMAX

Marvel’s #Eternals is spectacularly weird & rich w/ a new MCU mythology that makes it feel separate from everything else. It’s honestly refreshing. There’s a bittersweetness to the film that you feel in its sunset shots – a definite Chloé Zhao touch. It is soulful & thoughtful pic.twitter.com/pIAFAyhJ4D

Just got out of #Eternals. I've never been so invested in a story. It was cinematically beautiful. I was engaged the entire time. There's a lot to ingest but they do such a great job to process it all. This feels so different from the MCU, like it's own universe. I loved it.

This sort of goes without saying for a Marvel movie, but if you’re heading to see the film on November 5th, stay all the way through the credits.

There are two — TWO! — post credits for The Eternals. #Eternals

Apparently, this end credit tag is a big deal.

#Eternals is a total blast. A lot of material to cover but it is handled well. Can't wait for people to see it. Of all the end credit scenes I've watched during a premiere, I've never heard the audience lose their minds as much as they did for this one. #eternalspremiere pic.twitter.com/LXxZXY8P1f 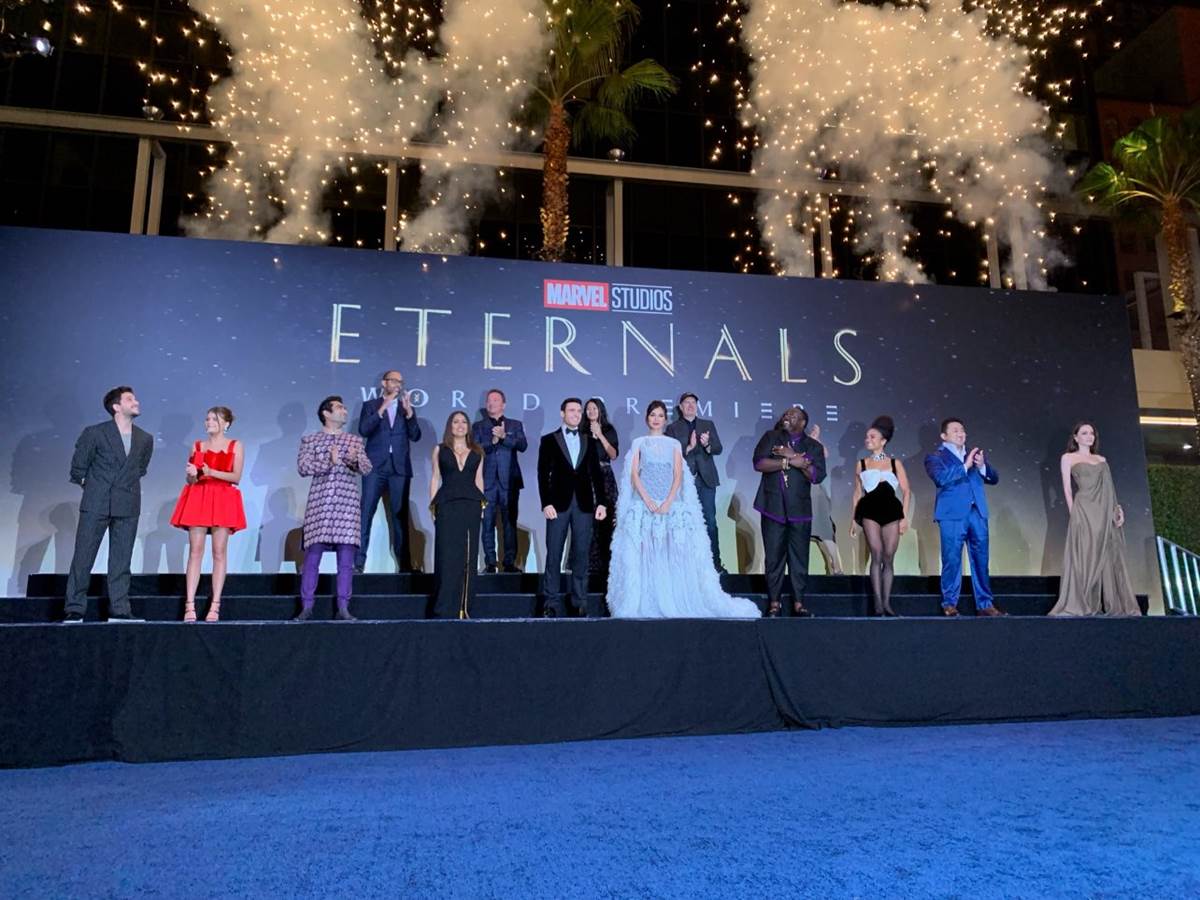