Everything Coming to Hulu in January 2022

Hulu has revealed all of their January 2022 new additions, including the first time The Golden Girls spin-off series The Golden Palace has ever been available on a streaming service. There are lots of new additions in addition to all of the new TV shows that will stream on Hulu after air. Here’s everything coming to Hulu next month. 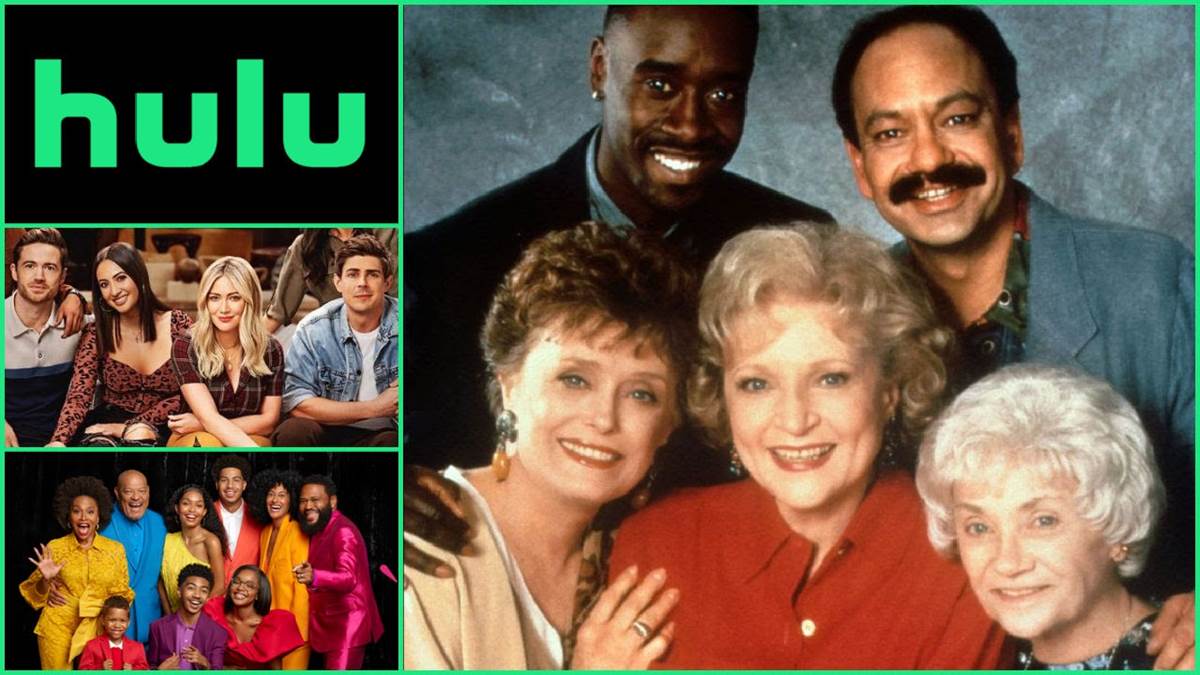 “Alex, Marty, Melman and Gloria step out of the comfort of home to find adventure in exotic places, like the wilds of New Jersey! They’ll meet up with old friends, including Bartholomew the Bat and Lala the now-grown Frog. And they’ll make new friends, like a mysterious salsa-dancing parrot who Gloria is determined to help, an adorable but uncontrollable puppy who steals Marty’s heart, and a clever deaf girl whose conversation with Dave sends the gang on a city-wide adventure. And they’ll finally spend a day with the notorious Bill the Flamingo, who says he wants to be a friend, but may just turn out to be Alex’s worst enemy!”

“Avery Hansen-White doesn’t do things she isn’t excellent at. So when her long-distance boyfriend hints at wanting to take their relationship to the next level, she sets out to master her sexuality, employing her oldest friend, Larson, as a test subject. In this hilarious teen comedy, Avery's study results in the realization that there's more to sex, and love, than mechanics. Relationships require both head and heart.”

How I Met Your Father: Two-Episode Series Premiere – January 18th

“In the year 2045, Sophie (Hilary Duff) is telling her son the story of how she met his father: A story that catapults us back to the year 2021 where Sophie and her close-knit group of friends are in the midst of figuring out who they are, what they want out of life, and how to fall in love in the age of dating apps and limitless options.”

“From award-winning director Ben Lewin (The Sessions, The Catcher Was A Spy), Falling For Figaro follows a brilliant young fund manager named Millie (Danielle Macdonald, Patti Cake$, Dumplin), who quits her job and ends things with her longterm boyfriend in order to fulfill her dream of becoming an opera singer — in the Scottish Highlands. She begins intense vocal training lessons with renowned but fearsome singing teacher and former opera diva Meghan Geoffrey-Bishop (Joanna Lumley). It is there she meets Max, another of Meghan’s students who is also training for the upcoming “Singer of Renown” contest. The competition between Millie and Max gradually evolves into something different and deeper.”

“A love letter to cinema, shot across the US, Iran, Chile, China and Thailand, by seven of today's most vital filmmakers. New life in the old house. A breakaway, a reunion. Surveillance and reconciliation. An unrecognizable world, in the year of the everlasting storm.”

“Clayton Echard’s journey to find love kicks off! For the first time in two years, 31 women arrive at Bachelor Mansion ready to make their grand entrances and first impressions for the man they hope could be their future husband. New host, Jesse Palmer, returns to the franchise to welcome Clayton and guide him through his first evening full of dramatic ups, downs and everything in between. But before the first limo even arrives, a shocking franchise first will have Clayton clutching a rose and questioning everything.”

“The judge, the jury and the star of the series, Steve Harvey, will welcome a variety of conflicts and characters to his courtroom – from small claims to big disputes and everything in between. Steve plays by his own rules, basing his courtroom on his own life experiences and some good old common sense.”

“Bow convinces Dre to attend a fundraising event for When We All Vote in hopes to make some new couple friends (and to do their part in increasing participation in each and every election), but Dre is convinced there will be nothing but dud husbands there to befriend. Their expectations are far exceeded when the special guest for the evening is none other than Michelle Obama. To their surprise, the former first lady accepts an invitation for dinner at their house. But on the evening of the special meal, the rest of the Johnsons want to crash the occasion.”

“This six-episode series to be aired in three parts is based on the true story of Mamie Till-Mobley, who in 1955 risked her life to find justice after her son Emmett was brutally murdered in the Jim Crow South. Unwilling to let Emmett’s murder disappear from the headlines, Mamie chose to bear her pain on the world’s stage, emerging as an activist for justice and igniting the civil rights movement as we know it today.”

“The story of Martin Shkreli, the pharmaceutical tycoon known for raising the price of an AIDS drug 5500% overnight, buying the sole copy of a Wu-Tang Clan album for $2 million dollars and being convicted of securities fraud.”

“Rose, Blanche and Sophia are where we last left them, in the living room of the house they shared for seven years. But now, they are watching movers as they prepare to leave their comfortable home for a new life — as managers of an art deco hotel in South Miami Beach called The Golden Palace.”

“Alvin Ailey was a trailblazing pioneer who found salvation through dance. AILEY traces the full contours of this brilliant and enigmatic man whose search for the truth in movement resulted in enduring choreography that centers on the Black American experience with grace, strength, and unparalleled beauty. Told through Ailey’s own words and featuring evocative archival footage and interviews with those who intimately knew him, director Jamila Wignot weaves together a resonant biography of an elusive visionary.”

“At a lake house, a couple entertains an out-of-town guest looking for inspiration in her filmmaking. The group quickly falls into a calculated game of desire, manipulation, and jealousy, unaware of how dangerously intertwined their lives will become. Starring Aubrey Plaza, Christopher Abbott and Sarah Gadon.”

“Alma (Maren Eggert) is a scientist coerced into participating in an extraordinary study in order to obtain research funds for her work. For three weeks, she has to live with a humanoid robot tailored to her character and needs, whose artificial intelligence is designed to be the perfect life partner for her. Enter Tom (Dan Stevens), a machine in human form in a class of its own, created solely to make her happy. The film is a humorous tale about the questions of love, longing and what makes a human being human.”

“BERGMAN ISLAND follows a couple of American filmmakers, Chris (Vicky Krieps) and Tony (Tim Roth), who retreat to the mythical Fårö island for the summer. In this wild, breathtaking landscape where Bergman lived and shot his most celebrated pieces, they hope to find inspiration for their upcoming films. As days spent separately pass by, the fascination for the island operates on Chris and souvenirs of her first love resurface. Lines between reality and fiction will then progressively blur and tear our couple even more apart.”

“A smooth-talking social climber is under investigation after his wealthy older wife turns up dead. Starring Annette Bening, Vanessa Redgrave and Christoph Waltz, in his directorial debut.”

“When a narcissistic son (Chris Baker), yearning for a life of luxury, and his father’s erratic gold-digging wife (Eliza Coupe) decide to kill their way into their inheritance, they employ the help of an absurdly handsome, mysterious hitman (Greg Finley), initiating a psychosexual love triangle that spirals into more than anyone bargained for. Deftly balancing sharp humor and horror, THE ESTATE delivers a perfectly campy, wildly enjoyable thrill ride that packs a deadly punch. Co-starring Vanderpump Rules’ Lala Kent.”

“After a spectacularly embarrassing public breakdown, irreverent alcoholic Samantha Fink is forced to move back home with her ‘Smother’ to sober up and avoid jail time. But when her childhood BFF reveals surprising news, Samantha starts to learn there is a fine line between party girl and walking disaster. SINGLE DRUNK FEMALE stars Sofia Black-D’Elia, Ally Sheedy, Rebecca Henderson, Sasha Compère, Lily Mae Harrington and Garrick Bernard. The series comes from 20th Television and is written and created by Simone Finch (The Conners), who will executive produce along with Jenni Konner (Camping, Girls), Phil Traill (Good Girls) and Nora Silver. Leslye Headland (Russian Doll and Star Wars: The Acolyte) directed and executive produced the pilot.”

“In director Karen Cinorre’s bold new action fantasy film MAYDAY, Ana (Grace Van Patten, Nine Perfect Strangers) finds herself transported to a dreamlike and dangerous coastline. Once there, she joins a female army engaged in a never-ending war where the women lure men to their deaths with radio signals, like 20th century sirens. Though Ana finds strength in this exhilarating world, she comes to realize she is not the killer they want her to be. Also starring Mia Goth, Havana Rose Liu, Soko, Théodore Pellerin and Juliette Lewis.”

“The gang deals with the fallout of the explosive events that took place at the luau: Aaron must deal with the accountability of his actions at the party, Zoey turns to Pops and Ruby for advice, and Ana and Vivek do their best to keep the secret of their hookup under wraps. Jazz struggles with her feelings for Des. Nomi processes her run-in with Phil.”

“Frank (John Pollono), Swaino (Jon Bernthal) and Packie (Shea Whigham) are lifelong friends who share a love of the Red Sox, rowdy bars and Frank’s teenaged daughter Crystal (Ciara Bravo). But when Frank invites his pals to a whiskey-fueled evening and asks them to do a favor on behalf of the brash young woman they all adore, events spin wildly out of control. Based on Pollono’s award-winning play, Small Engine Repair is a pitch-black comedic drama with a wicked twist, and a powerful exploration of brotherhood, class struggle and toxic masculinity.”