LEGO Con 2022 took place earlier today, and as promised, a new set based on the film Avatar and the upcoming sequel, Avatar: The Way of Water was revealed.

The set features lots of translucent bricks and add-ons, but what fans are sure to enjoy are the mini-figures, which the design team has said are larger than the standard mini-figures most LEGO fans are accustomed to, and designed with special features on their head, notably the Navi traits, like ears.

The set features some of the familiar looking Pandora landscaping as seen in the films, with LEGO vines hanging down to create an authentic look.

A LEGO banshee will also be available, complete with flapping wings and more translucent add-ons to give that familiar look from the Avatar films. 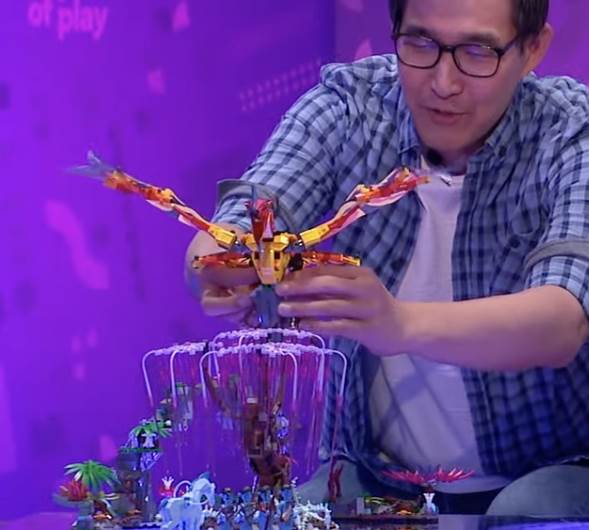 While we were waiting for the reveal that the sets would actually light up that never came, it was revealed that there are glow in the dark elements in the set.

No release date was provided when the LEGO Avatar set was showcased.

Last year’s LEGO CON was incredible. But this year, LEGO plans to top it with plenty of set reveals, awesome activities, and about a bajillion pieces of exclusive content, in what is the unmissable LEGO event of 2022!

LEGO has already revealed some of the fun of this year’s LEGO CON, including an exclusive LEGO Masters live show, a magical tour of the Warner Bros. Studio Tour London – The Making of Harry Potter, the latest from LEGO Games, exclusive content from LEGO Friends, interviews with our talented LEGO designers, a masterclass from inside Pixar Animation Studios and way more.

The announcement of a new LEGO Avatar partnership today makes sense considering the long-awaited upcoming sequel, Avatar: The Way of Water, set to debut in December.

Set more than a decade after the events of the first film, Avatar: The Way of Water begins to tell the story of the Sully family (Jake, Neytiri, and their kids), the trouble that follows them, the lengths they go to keep each other safe, the battles they fight to stay alive,  and the tragedies they endure.

James Cameron once again directs the film and produced alongside Jon Landau and the film stars: