Disney Consumer Products began their special presentation to New York’s Toy Fair 2014 with a vocal emphasis on storytelling and great properties, and it’s understandable why. Their excitement over shepherding several powerhouse franchises threatened to overshadow the actual toys that were presented, but Disney managed to deliver an excellent show peppered with many surprises and lots of energy while still showing off lots of cool toys. Most of the toys were, like the show itself, great fun.

The focus of the stage presentation was on their upcoming “Planes: Fire & Rescue”, “The Amazing Spider Man 2,”, “Guardians of the Galaxy”, and “Star Wars: Rebels”. They were presented in that sequence and included 1-2 toy highlights, special guests from each franchise, and an accompanying footage reel for each property. While reporters were asked not to film any of the material screened, the reels (much of which were incomplete, behind-the scenes, or previously unseen), added a welcome chorus of nerd gasps to an already fast-paced showcase. Full lines of toys were viewable directly after the stage show, which was also our opportunity to eat free muffins, fruit, and an endless supply of tiny tiny quiches (which in their turn could only have only been improved by being shaped as hidden Mickeys). 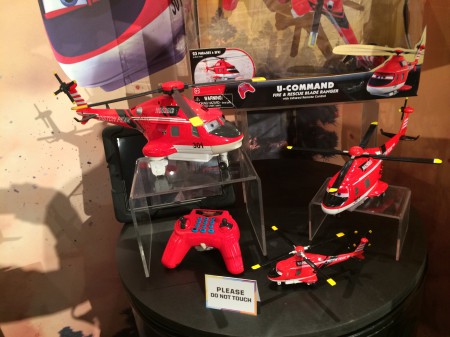 The first presentation featured a trailer for the upcoming sequel to Disney’s “Planes”, “Planes: Fire & Rescue”. Opening with a welcome rendition of AC/DC’s ‘Thuderstruck’ to set the mood, the trailer emphasized high-flying hi-jinx and adventure. The footage shown (some of which was incomplete) fired off a few well-placed plane-based puns and jokes, but also held an air of serious dramatic escapade. Indications are that fans of the franchise won’t be disappointed, and that some new ones may end up coming along for the somewhat-more-serious ride.

Comedian Dane Cook, the voice of the star plane, Dusty, bounced on stage to promote a “Fire-Blasting Dusty” toy, who boasts 25 of Dane/Dusty’s most memorable quips. The Dusty toy looked like a well-built piece of air-racing fun as the comedian and host hoisted it up and flew it around the stage (they used their hands to fly it about, it isn’t radio-controlled or anything). It later became apparent that “Fire Blasting Dusty” also comes with a targeting game in which he drops plastic “balls” on plastic “fire”. The quotes are meant to imply that there is no actual use of fire or water, not to make fun, because the toy looks great.

Later, many more toys from the “Planes” film were presented, and Disney has built an impressive line to back up this growing franchise. The products look nice, durable, and most-of all, entertaining. A particular highlight was the line-up of “Planes: Fire and Rescue Die-cast”, all of which are scaled with one another, and are wonderful collectible sculpts. A large carrier plane can be bought and holds several smaller planes inside, and ten-year-old me wants it. In case you need a plane that actually flies around, there was one: the U-command Fire and Rescue Blade Ranger. It’s sculpt is a little on the plasticky side, but above-all it has lots of buttons, though they wouldn’t let me play with it, so I cannot attest to it’s flight-worthy status. There were also some nice little pull-back rolling toys as well as what was a demonstratably-fun race track which features a flying “burning” bridge rescue.