The Avengers and My Lack of Initiative

It’s Saturday, May 2 and I still haven’t seen Avengers: Age of Ultron yet. Yes, it’s killing me a little considering I can’t go on Twitter or read any articles and that’s about all my life consists of. Part of the reason I haven’t made a trip to my local cinema yet is because I hate crowds… and yet my favorite and most memorable movie going experience happened three years ago when I saw the first Avengers film in a packed Los Angeles auditorium.

First, let me back up and explain that I’ve been a spoiled cinephile for some time. Having worked at a movie theatre for the majority of my life, I would not only get to screen blockbusters before the general public but also get paid to do so. Of the hundreds of films I’ve seen over the past decade, the vast majority were screened in the middle of a Wednesday or Thursday night before the film’s release in an auditorium I shared with no one.

Back when movies came on reels of 35mm film, I would often have the duty of splicing the movie together and then watching the film to make sure I didn’t scratch the print, put a reel on backwards, or swap the order of the film — it happens. After the switch to digital, my job consisted of uploading a file from a hard drive and pressing “play.” In both cases, I was free to enjoy my film without any crying babies, texting teens, or chatty Cathys ruining my viewing experience.

Because I saw such poor behavior on a regular basis (and tried to correct it when I could), the idea of arriving to a theatre early, waiting in line, and fighting for seats just to run the risk of the entire film being ruined by such jerks was just too stressful for me to bear most of the time. I mean, based on the number of times I’ve been able to enjoy Pirates of the Caribbean or The Haunted Mansion in the past few years without someone blinding me with their flash for the ride’s duration (zero), what makes me think I’d be able to enjoy two hours in a room with the masses? That’s when I was introduced to my cinema savior: reserved seating.

Theatres like the Arclight in LA first alerted me to the beauty of reserved seating and completely changed the way I saw movies (mostly limited release films that wouldn’t make it to my mainstream theatre). Instead of lines wrapping around the building on a busy night, moviegoers could purchase their tickets online and choose their seats before stepping foot in the theatre. I can’t tell you how amazing the feeling of walking into a sold out theatre at showtime and spotting your two reserved seats in the dead center staring back at you is.

Since I was such a fan of this new system, I kept tabs on which theatres in my general area offered it. When May 2012 and the release of The Avengers came around, I was delighted to learn that AMC Century City would not only observe their reserved seating policy for the event but would also do so at the same price point of other nearby theatres without this amenity. As soon as we learned this, my roommate and I snapped up our tickets in the back row immediately. 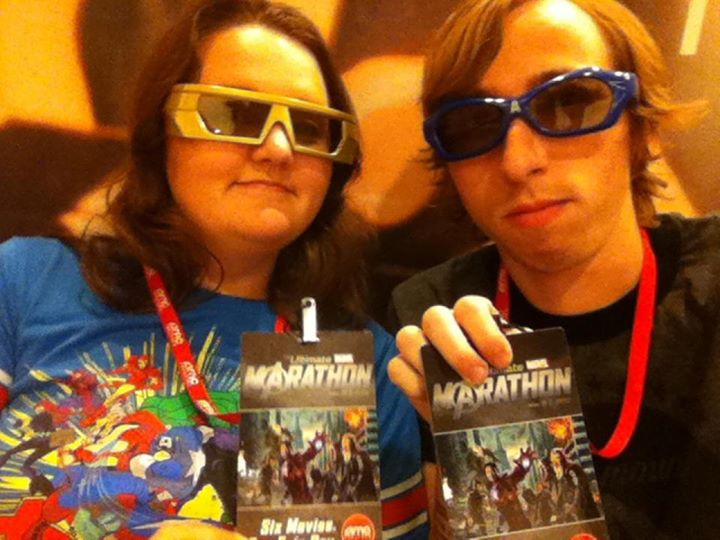 At the time, I had only seen the two Iron Man films and was anxious to catch up on the rest of Phase One, as it were. Even though it wasn’t nearly as long as the 29 hour event Justin recently endured, this all day outing was going to be a bit of a challenge for us. To make things a bit easier on ourselves, I screened Captain America at my theatre the night before the marathon so that we could skip the penultimate film of the series and take a nap before the main event.

I could tell the event was going to be special when we got the end of the first Iron Man. In the now-infamous post-credits scene, we were introduced to Nick Fury as he tells Tony (and us) about the “Avenger initiative.” Back in 2008, I didn’t know what this meant, but now I was about to watch four years worth of films that would explain it to me. With one film down, the crowd roared for this bombshell-dropping line of dialogue that set the tone for next 10+ hours.

Before going in, the film I was least excited about seeing was Thor. When it was released I had nearly no interest in seeing it and thought it would be the hardest sell on the road to assembling the Avengers. However, I was surprised by how enjoyable and fun the film was and by the humor that was quickly becoming Marvel’s signature. After that aforementioned nap (which was shortened by our having to drive from Century City to Hollywood and back), it was time for premiere of The Avengers.

Maybe it’s because everyone paid $40 to see the film that night. Maybe it’s because they didn’t want to miss a single second. Or maybe it’s just because they were all good a decent people, but no one took out a cell phone or spoke out of turn during that screening. Instead, the audience participation was nothing but welcome and brought a sense of community to the moviegoing experience that has been sullied over the past few decades.

The best example I can give of this camaraderie is the confrontation between Hulk and Loki. When the trickster launches into a classic villain monologue, Hulk interrupts by literally smashing him into the floor. After this, Hulk says “puny god,” but I didn’t know this until I saw it on DVD some time later because the theatre was filled with cheers and laughter so loud  that I’ve never heard anything quite like it. While the rest of the film had similar moments, this was easily the biggest. Being good Marvel fans, everyone stayed in their seats after the credits to see what was the perfect wrap up to Marvel’s Phase One.

A few weeks ago, I caught the last hour of Avengers on FX and couldn’t help but smile the entire time. All of that excitement I felt from the crowd that night is now engrained in the film for me. What Marvel did with that movie was unprecedented and it’s mind boggling to think of how they pulled it off (Boyhood might beat it on that level, but still).

I am excited for Age of Ultron and everything else Marvel has on their slate. While I have no doubt that these films will be as enjoyable or even more enjoyable that Avengers, I don’t know if I’ll ever have the same experience as I did watching the culmination of an experiment gone 100% right. As Fanboy noted, every franchise in town is now trying to replicated Marvel’s model, but I doubt it’ll ever be the same.

So while I wait to enjoy Ultron in a nice, empty theatre with as few patrons as possible, I hope that maybe Marvel, Disney, or someone else can prove me wrong.