Welcome to the Festival of Friends! When this theme was announced in the debut of Funko Pop’s first Disney Treasures subscription box, I assumed from the title that it would mostly be themed to the circus. However, the emphasis is actually on “Friends.” As promised, Dumbo is the star of this crate, with Mickey’s pal Pluto making his Pop! Vinyl debut, plus Buzz Lightyear’s BFF Woody, Pooh’s little buddy Piglet, and Bambi’s friend and mentor, Thumper. Like all of Funko’s crates, opening the outer layer reveal’s the exclusive patch and pin.

What’s really cool about the patches is that collecting all of them from the introductory year will create one giant patch that celebrates all of the lands on the treasure map, which is found just below this fold.

The front side of the map gives you more information about the items included, including Disney Trivia from Dave Smith’s Disney A-to-Z and concept art from the design process. Just under the map is a bonus “Festival of Friends” sticker, just like the one applied to the outside of the box. 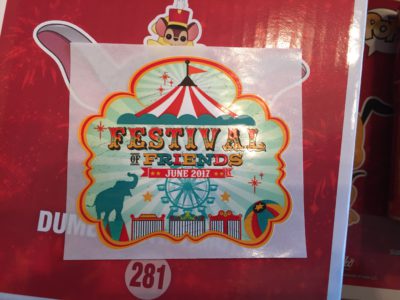 The second Disney themed Mystery Mini and Collectable Tin features Woody from Toy Story. Being a Disney Parks themed item, they pass this off as being from Toy Story Midway Mania and the tin certainly reinforces that idea, with images from the attraction all over the world, including the exterior of the Tokyo DisneySea’s version. The vinyl is incredibly adorable and I love the detail with his pull string.

It’s hard to believe that with all the Disney characters that have received the Funko Pop! treatment, Pluto hasn’t been one of them. That wrong is now righted with Mickey’s best pal, Pluto!

Saving the best for last is Dumbo, a flying figure that claims to be inspired by the Disney Parks attraction, although I would argue that if this were true, he would be wearing a pastel saddle. But regardless, it’s a fantastic figure, the star of this box, and I love the clear base he rests on.

The back of the map reveals a teaser for our next destination, a place called Tiny Town, which subscribers can visit in August. My initial assumption was that it would be themed to “it’s a small world,” but the artwork looks more like Frontierland. Over the icon is a silhouette of Tinker Bell and a flying figure of the famous pixie has been announced as the star figure of this release. For more information and to subscribe to the Disney Treasures crate, be sure to visit Funko’s official website.