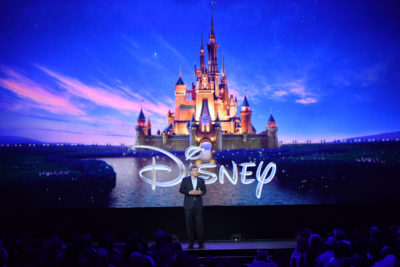 Without a doubt, the most anticipated presentation at the 2017 D23 Expo was Disney, Marvel Studios and Lucasfilm: Live Action at the Walt Disney Studios. The presentation began at 10:30 am on Saturday, July 15th, and some fans camped out for over 24-hours to see it. In fact, fans arriving after 3:30 am to line up for it had little chance of even getting in. But for those who spent the night on a hard cement floor, it was absolutely worth it. 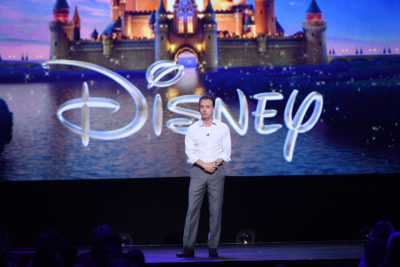 The presentation was hosted by Alan Horn, Chairman of Walt Disney Studios. His dry wit and humor make him so lovable and I wish I had a pocket-sized Alan Horn to take with me everywhere. He kicked off the show by introducing Sean Bailey, who lacks Horn’s humor but still has a lot of polish for this star-studded presentation. He kicked things off by debuting the trailer for A Wrinkle in Time. 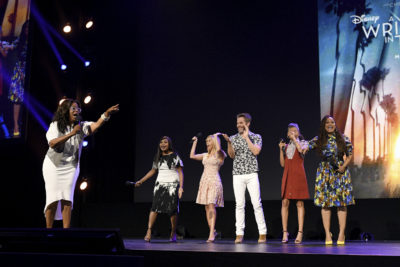 After seeing the first footage, the audience was extremely excited to hear Director Ava DuVernay talk about why she wanted to make the film. She introduced the world to her version of Meg Murray, played by newcomer Stormy Reid. Joining her on stage was her onscreen father Chris Pine, as well as Reese Witherspoon (Mrs. Whatsit), Mindy Kaling (Mrs. Who), and Disney Legend Oprah Winfrey (Mrs. Which). The teaser poster was revealed and Oprah announced that everyone in attendance would be getting one after the presentation. The audience went wild as she embraced her infamous free giveways, pointing and yelling “You get a poster, and you get a poster, and you get a poster!” Too bad it wasn’t a car, though. 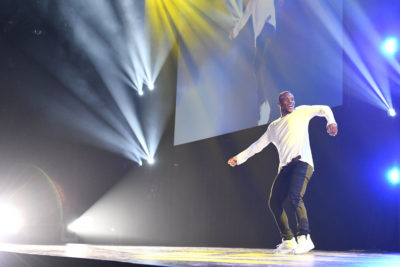 As the cast left the stage, Sean Bailey began to talk about The Nutcracker and the Four Realms, a holiday treat for 2018 where the classic tale will be reimagined as a fantasy film. Morgan Freeman, Kiera Nightly, and Helen Mirren all play characters that Clara encounters and Bailey revealed that dance would play a big part in the film. The Rat King is a character made up of thousands of individual rats and dancer Lil Buck served as the movement inspiration for him. Lil Buck took to the stage and performed some impossible moves, including rolling his ankles while balancing on his tiptoes with his arms twisted behind his back. 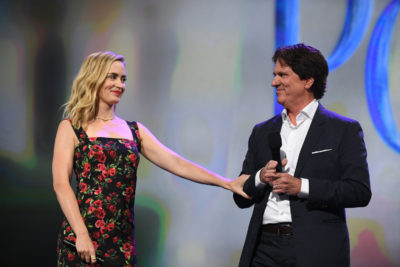 One of the most anticipated films in development at Disney right now is Mary Poppins Returns and Sean Bailey was very clear that this is a sequel to the 1964 classic film, not a reimagining. Director Rob Marshall and Emily Blunt took the stage to share a little more information about the film, which is set during the Great Depression. Jane and Michael are now adults and Michael is a widower with three kids of his own, now residing at number 17 Cherry Tree Lane. This provides the perfect reason for Mary to return to the Banks family and the inspiration was drawn directly from the books by P.L. Travers. Marshall also explained that the set featured an original table from the classic film, which was on display at Club 33 for many years. 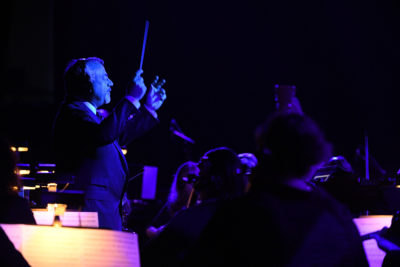 Touching briefly on the music, Marshall explained that Marc Shaiman and Scott Wittman were writing new songs in the Sherman style. A curtain parted on the side of Hall D23 to reveal a full orchestra and Shaiman, who gave us our first taste of the new music. It had a “Buddle-uddle-um-dum” feel to it and as the orchestra played, we were treated to a rapid succession of shots from the film. Mary being pulled out of the sky holding on to a kite, Meryl Streep with purple hair, Angela Lansbury in a big hat, Lin Manuel Miranda and his fellow lamplighters dancing sideways on lamp posts, Dick Van Dyke playing Mr. Dawes Jr., and yes, even a shot where Emily Blunt appeared to be in an animated world. Poppins is a tough act to follow, but everyone had been waiting for some news on the live action remakes of animated films and Sean Bailey shared some new information rapidly. First up was some casting news for Aladdin, including Will Smith as the Genie. He also confirmed that Jungle Cruise is in production starring Dwayne Johnson and mentioned Mulan. Tim Burton also recorded a video from the conductor’s seat of Casey Jr. for his version of Dumbo. The giant maquette for the elephant with the big ears was wheeled on stage and he’s very cute. He looks more like a real elephant than I was expecting from Tim Burton. 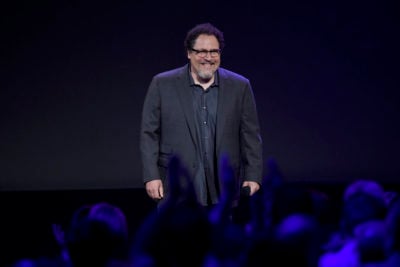 But the most anticipated film in this category is The Lion King and Disney fan John Favreau was not about to disappoint 8,000 of his fellow card carrying D23 members. He explained that the film is very early in production, but the first question he asked when he was put on the project was “When is D23?” so he could get something ready. We were treated to Circle of Life fully animated to look live action and set to the song from the original film. It was absolutely breathtaking and we all turned into puddles when baby Simba sneezed. 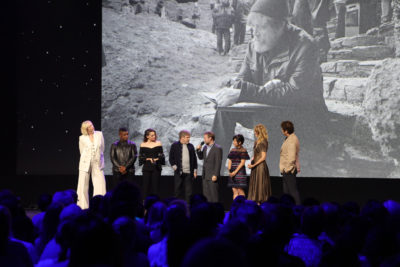 Alan Horn returned to the stage and gushed over everything we just saw (and did his own hilarious impression of Lil Buck’s dance style). He explained that Kathleen Kennedy is in England working on the Han Solo film and couldn’t make it today, but he introduced Rian Johnson to give us a little glimpse into Star Wars: The Last Jedi. He was joined onstage by Daisy Ridley, John Boyega, newcommer Kelly Marie Tran, Laura Dern, and Gwendoline Christie. The worst-kept secret was Mark Hammill joining them last since he was inducted as a Disney Legend the day before. They didn’t say much, but Johnson did show us some behind-the-scenes footage of the shoot. I was a little disappointed that a full trailer didn’t make its debut, as it was around this time in 2015 that the first full trailer for The Force Awakens premiered and I think everyone was expecting it. 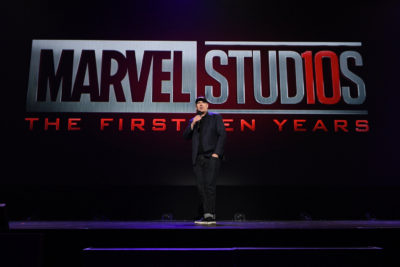 The final studio was Marvel and Kevin Feige came out to talk about how proud he is that Marvel Studios is about to celebrate its 10th anniversary. He mentioned Thor: Ragnarok and Black Panther quickly, but then said they are still filming Avengers: Infinity War and wouldn’t be able to talk much about it. But he did bring out Josh Brolin (Thanos) to talk about how powerful his character is. When Brolin got a little Cocky, Feige decided he needed to challenge him and began to bring out other cast members from Infinity Wars: Sebastian Stan, Dave Bautista, Karen Gillan, Pom Klementieff, Benedict Cumberbatch, Chadwick Boseman, Chris Hemsworth, Robert Downey Jr., Mark Ruffalo, Tom Holland, Elizabeth Olsen, Paul Bettany, Don Cheadle, and Anthony Mackie. It was more talent than the Hall D23 stage could hold. To close it out, Feige said they had no footage from Avengers: Infinity War and would just give us a sizzle reel to celebrate the anniversary of Marvel Studios.

The reel began with clips from some of the earliest films and went all the way up to Guardians of the Galaxy, Vol. 2. When Thor crashed into the windshield of the Milano, I assumed we were getting something from Ragnarok, but the next clip suddenly had the Guardians fighting alongside the Avengers. Peter Parker sitting on a bus with spidey senses tingling as the hairs on his arm rise. And Thanos with the Infinity Gauntlet trying to crush Thor’s head. A quick shot of literally every Marvel hero in the MCU was shown, including Captain America with a new, more sophisticated and incredibly handsome haircut. No images have been released from the footage shown, but after the panel, Josh Brolin unveiled statues of the children of Thanos at the Marvel booth and posed for this intimidating picture with the Infinity Gauntlet. 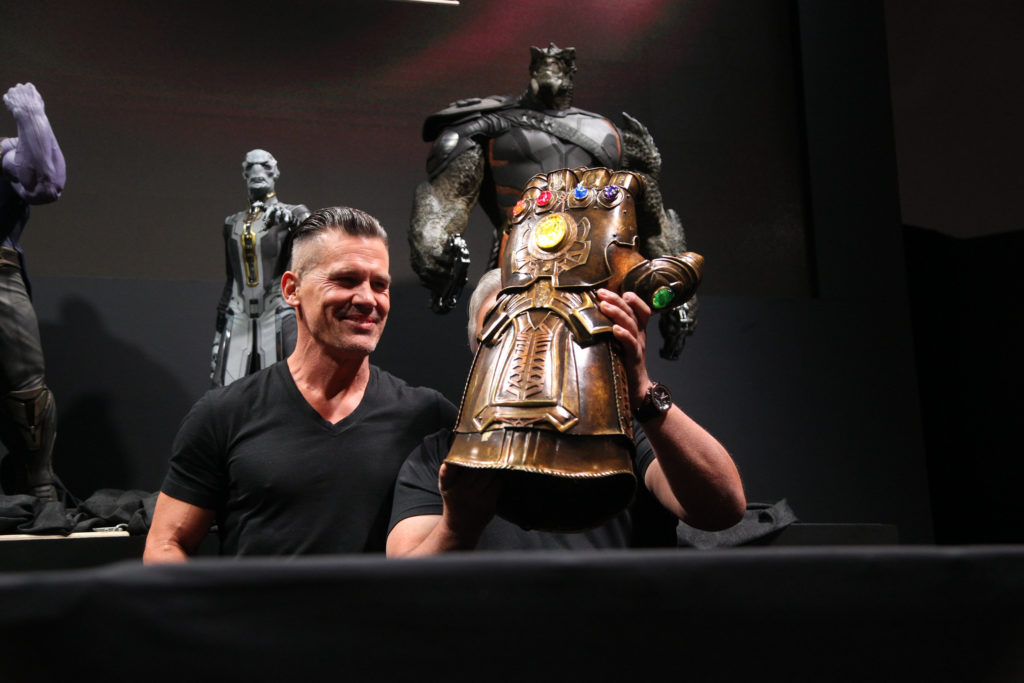 As you can see, the live action slate from Disney is full of future blockbusters. It seems were in good hands as fans with great leadership amongst all studio segments and I can honestly say there’s not a single film in development that I’m not extremely excited to see. The only thing missing from this panel, other than a trailer for The Last Jedi, was confetti.