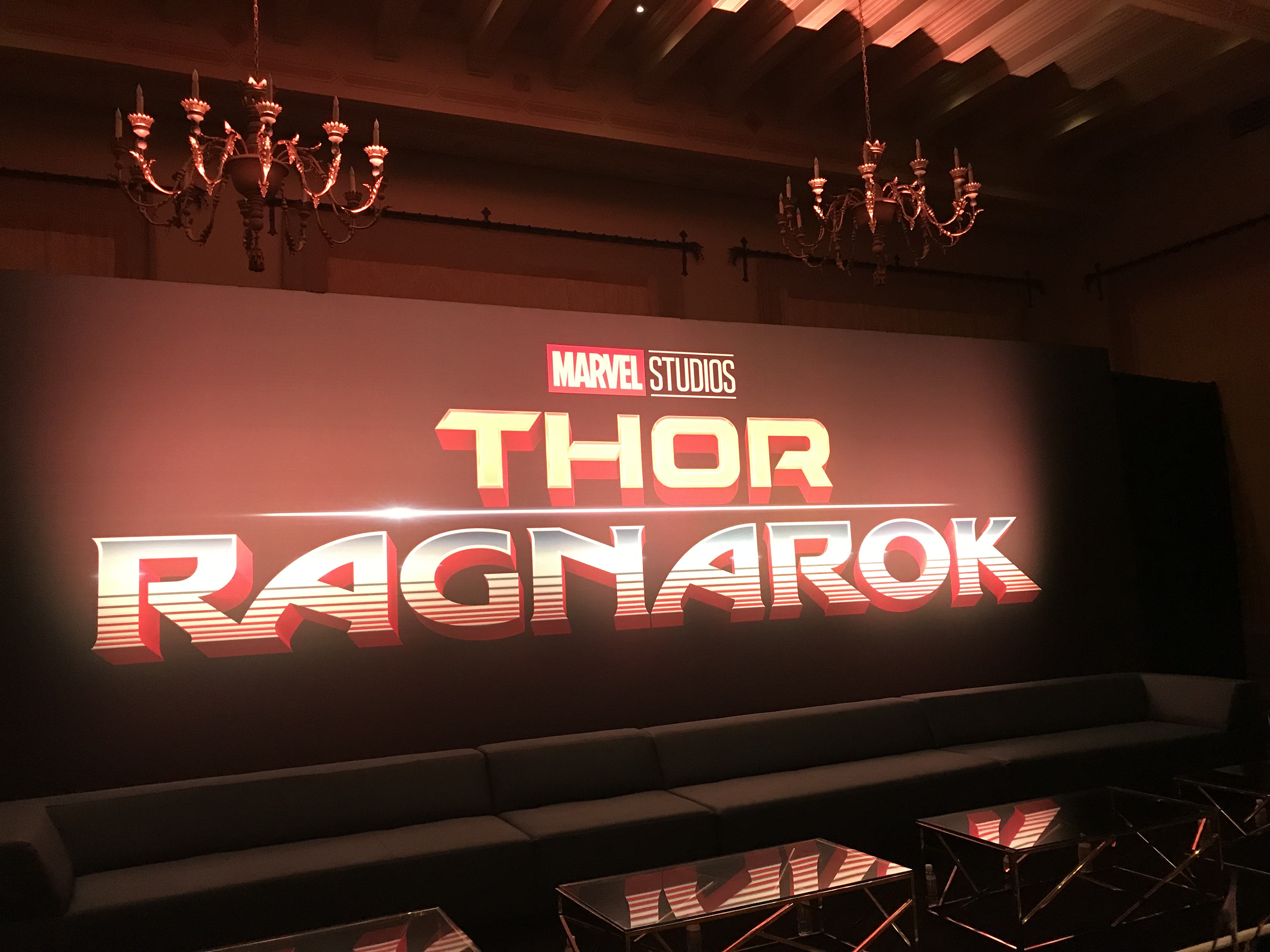 What happens when you put one of the biggest casts next to an Avengers film in one room to talk about their movie? You get lots of laughter! After having the chance to see the film (read the review here), we had a chance to hear from the stars of the film and ask a few questions.

With head of Marvel Studios Kevin Feige leading the lineup, he was joined by Karl Urban who plays Skurge, Rachel House who is the Grandmasters right-hand woman Topaz, The Grandmaster himself Jeff Goldblum. Tessa Thompson the warrior Valkyrie, was joined by Chris Hemsworth and Mark Ruffalo, Cate Blanchett as the main villain Hela, Tom Hiddleston, and rounding out the cast was the person in charge Director Taika Waititi. 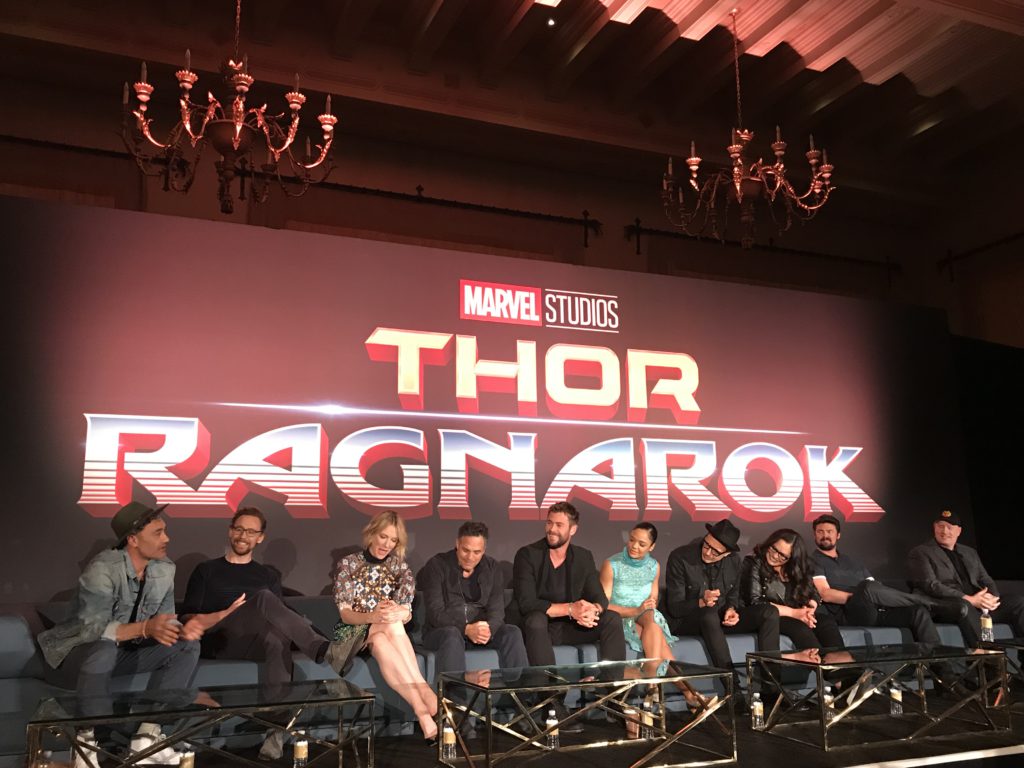 The first question of the day was directed at Thor himself, Chris Hemsworth. He was asked what made this film different from the others, to which he responded, “Taika Waititi, basically.” He expanded saying “it all came from his (Taika) crazy, wonderful brain, and his inspiration, and him pushing us every day on set, and constantly encouraging us to improvise, and explore, and take risks. And it was one of the most enjoyable experiences I’ve ever had on a set, and a film that I feel the most proud of, just because of this – this whole team, and the collaboration, and fun we had.” 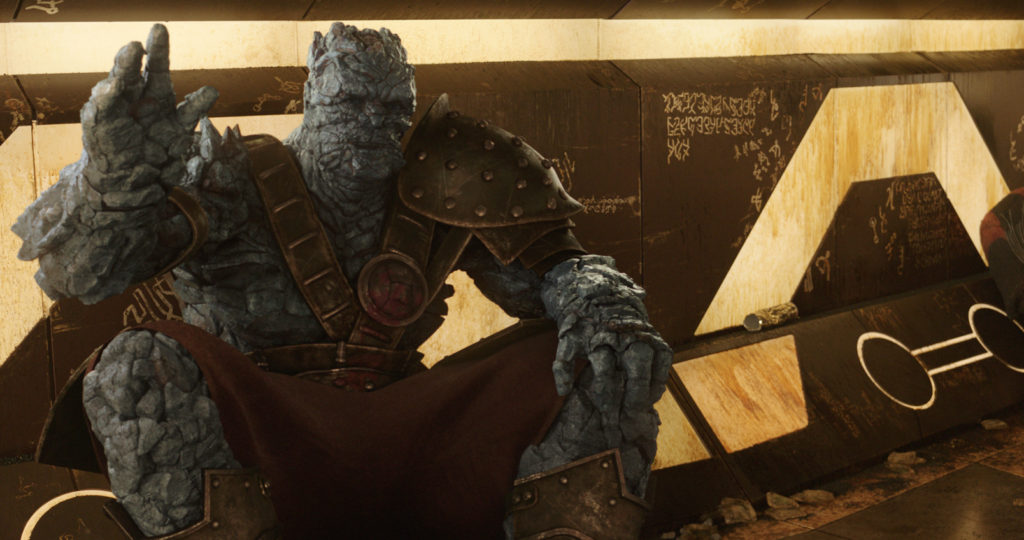 Taika, who besides being director also stars as the scene-stealing Korg, said when asked about being hired for this film, “Obviously I thought that Marvel had lost their minds, so they’re just hiring anyone now.” Kevin Feige went on to talk about how Taika worked so well with the cast giving “them the confidence to explore that and to try things. And most of that is in the movie, because it was on story and yet at the same time expanded each of their characters.”

When the floor was opened to questions, the first one directed at Taika was how he made almost every scene in the film look like a “heavy metal album cover” and what Marvel Studios take on it was. Taika went on to explain, “Well, you know, and to these guys’ credit, you know, they were very supportive right from the beginning. You know, they – yeah, they supported me in this – if you look at all the elements in the film, it’s pretty crazy, you know. If you would describe all of the characters in this film to someone, it’s – it just – yeah, it deserves to have all of that color, and you know, and all of those crazy, curvy designs, and yeah, it’s a bombastic concept that just – you can’t hold back from this thing. So you’ve got – you know, it’s either all in or nothing.” Kevin also went on to say about the Led Zeppelin song that was used, “So from the beginning, that song kind of defined what Taika was going to do with this. That it’s in the trailer, that it’s in the film – all from that first meeting, and from one of his first instincts of this movie, is very impressive.”

As the afternoon went on Mark Ruffalo was asked about a standalone Hulk film and gave a perfect answer: “About a year ago, before I even had this part, or were talking about doing this – it was well over a year ago, Kevin had asked me to come over and have a script meeting. And basically he sat me down and he said, ‘What would you like to do if you had a stand-alone Hulk movie?’ And I said, ‘I’d like to do this, this, and this; and this and this – and then this. And then this, and this, and this, and then it would end like this.’ And he’s like, ‘I love that.  Let’s do that over the next three movies, starting with Thor 3 and carry it on through Avengers 3 and Avengers 4.’  And so that’s my stand-alone Hulk movie.”

I had the chance to ask Jeff Goldblum, a long time favorite of mine, what it was like to come into the Marvel Universe to which he could not have answered more like Jeff Goldblum if he had planned it “I like the character, of course, and the opportunities in the character. Joining a group like this, a cast like this is a dream come true. Taika – working with Taika, that was my first, you know, connection point to the movie. We had a meeting and hit it off, and he said what we were gonna do, and improvise, and have fun.  But then, you know, Kevin Feige and Louis D’Espesito, and Victoria Alonso, and Brad Winderbaum – the whole upper tier of creative leaders, do something unique. They know how to make these epic productions, and popular movies, but they want to make good movies. And they somehow uniquely know how to do them, that feels to me like an actorly, workshop-y, character-y, improvisatory, delightful experience – and make a movie that I think skins the cat like this is just – I’m grateful, overwhelmingly grateful.”

As the cast started to break down and really start joking with each other, Cate Blanchett shared with us one of her embarrassing stories from the set about filming. “I had to – well, I manifest weapons, and I had to throw them, and I could see Taika’s disappointment as I threw it, I said, ‘Ha.’ And I had to stop making the noises, because I’d go, ‘Ha.’ And so I had to close my mouth. And so eventually Zoey (Bell Cate’s stunt double) suggested that I put some sugar, which was deeply humiliating – sugar packets in my hand so at least I could throw something and be real.”

Tessa Thompson was asked about a standalone film featuring her “rebuilding the Valkyries,” which Kevin jumped in and said was a good idea before Tessa could retort to Kevin “Recently, I marched up with a couple other women that work in Marvel, and we were like, to Kevin, ‘What about a movie with some female superheroes – just like, all of them.’ Kevin’s response to “every female hero we have was standing there going, ‘How about it?’” was “yes,” so we could see the “The Femengers” (a title that was batted around on the stage, not mine) sometime in the future! 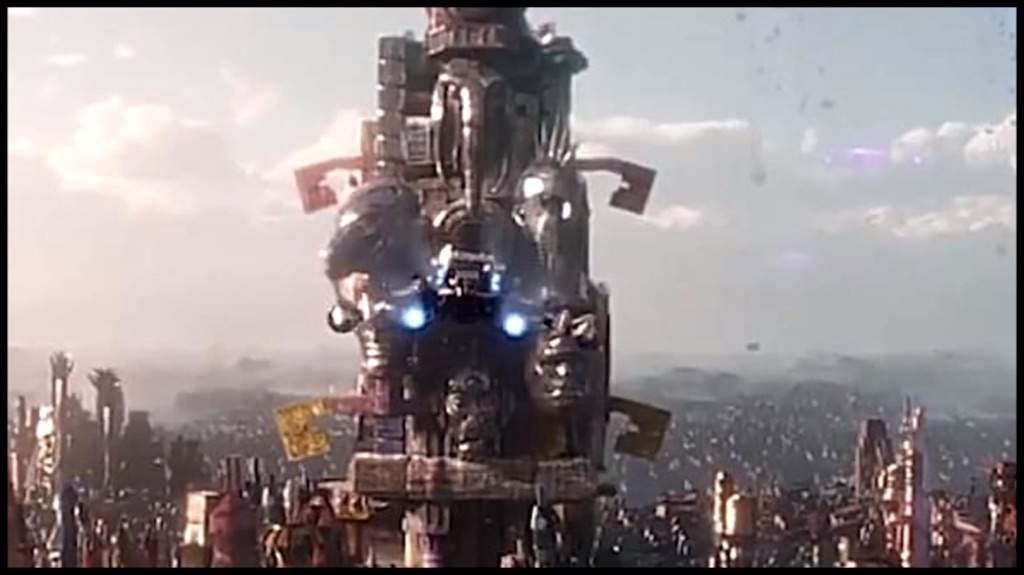 My favorite question had to do with any Easter Eggs in the film, of which there are many, to Kevin. “There might be some things in the trash piles. I mean, the biggest – the biggest Easter eggs are on the side of the Sakaran Palace – right, Taika? There are – there are previous Grandmaster champions that we see, as one for Hulk is being constructed, and those are all sort of Easter eggs for the deeper comic universe – that may or may not ever show up in the cinematic universe, but we thought it’d be fun to celebrate,” explained Kevin. But Taika had to add in “Yeah. And in the trash pile, there is one Easter egg: an actual egg.” 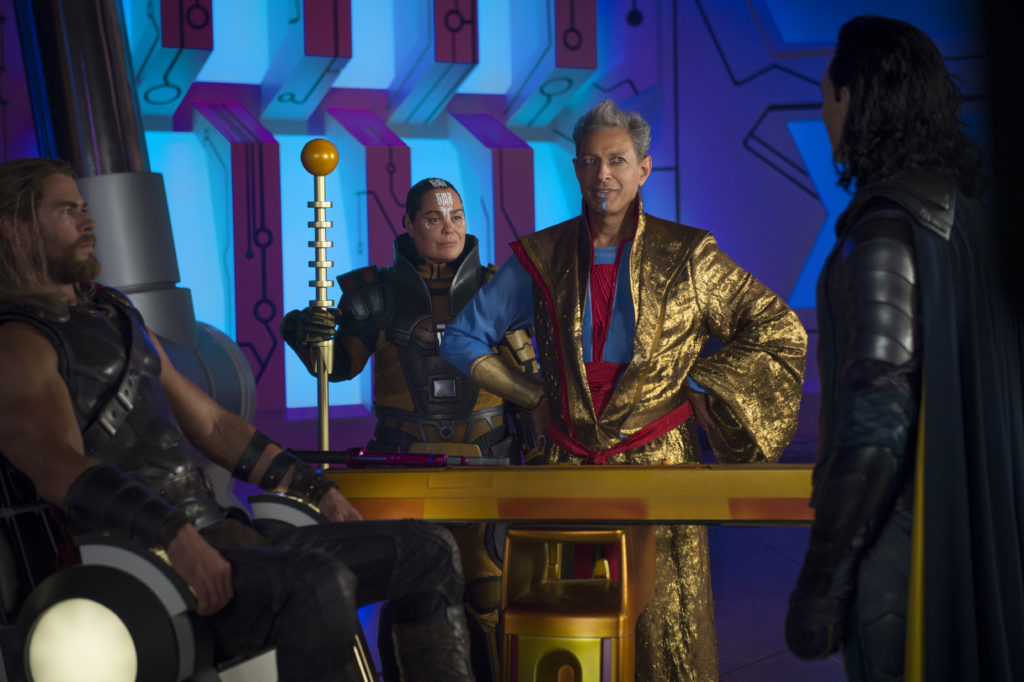 The funniest moment of the day came when Taika was asked what the most part of making the film was, to which he pointed to everyone on the stage before explaining about making his other films “All my shoots, about 25 to eight days, and by – by day 30 on this, I was like, ‘Well, no more ideas. I’m done.’ And you know, you’ve got 55 more days.  And so – so I had to like do some meditation, and like try and chill out, and just – just to kind of keep my – yeah, my creative energy – yeah, just keep it going throughout that whole length of time, ‘cause the – the amount of stress, or the exhaustion really does take its toll, and you don’t realize it’s happening until it’s too late, and then you can’t feel your legs.”

Being in the same room with this cast was infectious and you could tell they all had the time of their lives filming Thor: Ragnarok and you will have the best 130 minutes of yours when you see it starting November 3rd in a theater near you!