Book Review: Little Do We Know 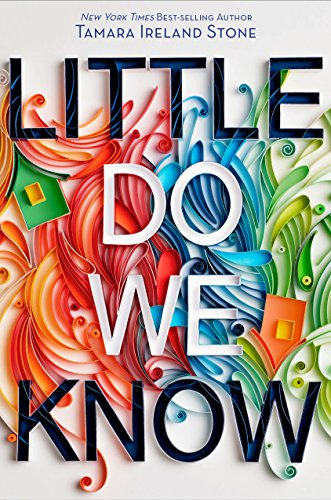 Everything happens for a reason or does it? In this young adult novel, Tamara Ireland Stone’s characters grapple with faith, destiny, growing up, and the disappointments that accompany them. Told in alternating chapters, Little Do We Know focuses on the experiences of high school seniors Hannah and Emery. The girls are next door neighbors and ex-best friends after a fight leaves one of them feeling betrayed. While both regret the outcome and miss their friendship, neither one can bring herself to approach the other.

With graduation around the corner, Hannah learns her parent’s finances aren’t as solid as she believed. Now attending her dream school might be out of the question. Emery tries to accept the fact that her mother is going to marry a man she can’t stand, all while preparing to audition for UCLA – her college of choice. Normally the girls could rely on each other to get through the inevitable changes, but that’s no longer an option. Fortunately, Emery has an amazing boyfriend and a great group of friends to support her. Hannah on the other hand unexpectedly finds comfort and a little more from her church’s young music leader.

Everything changes one night when Hannah witnesses an accident involving Emery’s boyfriend. It seems that the girls’ paths are certain to cross again. Is this this work of God, fate, destiny, or just happenstance? Will they be forced to have the conversation they’ve been avoiding and will they be able to apologize?

Little Do We Know feels like it’s based on someone’s personal experiences. Even I could relate to the characters’ struggles and questions which, ironically, resembled so many of my own. It was more engaging than I anticipated, and I couldn’t put it down. I really liked how self aware Hannah and Emery were. Viewing things from a different angle can be a shocking experience, and when they find themselves questioning everything they’ve ever known, they begin to grow. They realize their personal mistakes and understand the way they respond can impact things for better or worse. It’s a scary change but a positive one.

I love how Stone’s characters handled every situation. Even when they’re learning truths that upset them, no one is ever vilified. Hannah is angry at her parents, and even though she distances herself from them and their beliefs, then are portrayed as humans who’ve made mistakes. Hannah has good reasons to be upset, but she doesn’t hate them. Instead, she fully embraces that her world view has changed. It’s relatable and incredibly mature.

Speaking of maturity, this book does touch on the subject of sexual assult, contains some mild adult language, and a few romantic encounters that might not be appropriate for all readers. However nothing crosses into graphic territory. Perhaps that’s one of the best things about Little Do We Know. Stone takes her audience seriously knowing that talking about uncomfortable or adult topics help us to process them and find solutions. She proves that you can’t know everything just by looking at it from one angle.