Guests arriving at the Disneyland Resort during the summer of 2018 have seen an uncharacteristic amount of construction work during the Resort’s busiest season. Star Wars: Galaxy’s Edge has been ongoing and appears to be on schedule. The Mickey and Friends parking expansion is the largest and most visible project. Inside Disney California Adventure, work on elements of Pixar Pier continue, despite the fact that it has already officially opened. Work on the World of Color barges is also on display. 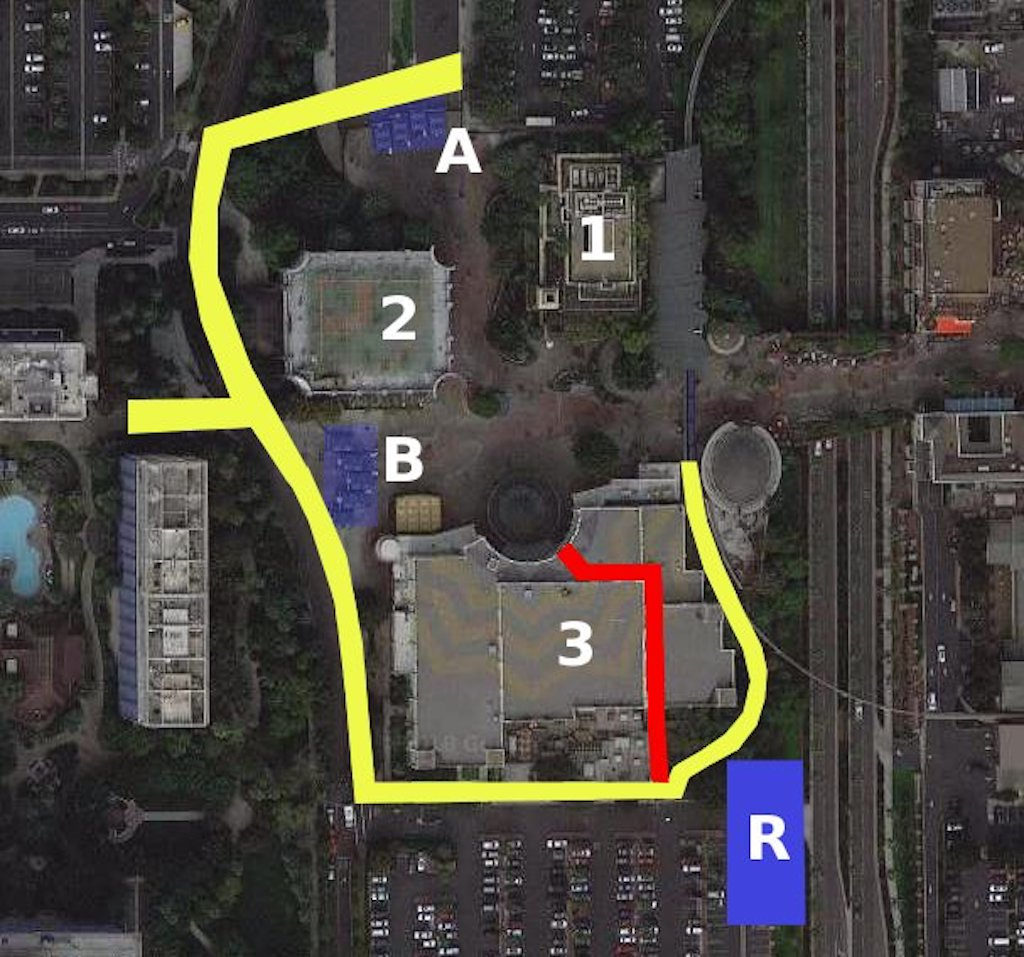 Diagram of Downtown Disney Anaheim’s west end. “A” marks the location of the Downtown Disney parking lot security gate. “B” is the hotel security gate. “R” is the general area of the former Richfield gas station. Also: 1, Rainforest Café; 2, ESPN Zone, and 3, AMC Theater complex. The yellow path marks the proposed route to take guests around the AMC Theater and through the former cast entrance between AMC and the Lego store. The red path shows a route through the east end of the former AMC Theater complex, avoiding the Richfield Gate work area.

One project that seems to have completely stalled, however, is the announced fourth hotel that will be joining the resort. With the early summer closure of Rainforest Café, the ESPN Zone, the AMC Theaters and a group of smaller venues, the west end of Downtown Disney has become a ghost town. The closure of one security gate was announced, but inexplicably the gates—one that serves the parking lot and the other serving the hotels—remain open. The existing security gate for the Downtown Disney parking lot According to security cast members, a move to a new location was imminent. Since the entire area was scheduled for demolition and site preparation, a new security location was to have been established between the east end of the AMC Theater building and the Lego Store. Guests would have been routed completely around the AMC Theater and through an area that had previously been used by cast members. But work on the new gate, expected to be temporary and therefore quickly accomplished, has taken weeks longer than anticipated. According to several sources, there is an issue with the area immediately adjacent to the former Richfield Gate. This cast entrance between the AMC Theater complex (right) and Lego store (left) has been in place since Downtown Disney opened in 2001. This area was recently closed off to cast members. The monorail makes it way through the area between the AMC Theater and the Lego store.

To understand what is happening behind the construction fence that now ranges along the west side of Disneyland Drive, one must go back to the earliest days of Disneyland. In late 1955 the Disneyland Hotel opened across the street from the exit from Disneyland’s public parking lot, on what was then West Street. Just to the south of the hotel entrance was a Richfield service station. This was sited to take advantage of motorists leaving Disneyland at the end of the day. Richfield was also the sponsor of the Tomorrowland Autopia as well as a show called The World Beneath Us.

In the 1980s Disney acquired the Disneyland Hotel, after the service station had been closed and the structure demolished in the mid-1970s. The area was incorporated into the hotel complex, but the entrance was still referred to as the Richfield Gate. For the 2001 Resort expansion, the area became part of the guest parking for the new Grand Californian Hotel across the street. With the grade separation to drop Disneyland Drive below the Downtown Disney pedestrian mall, the old Richfield gate was eliminated. Now, this area is scheduled to be intensively developed as part of the hotel expansion. 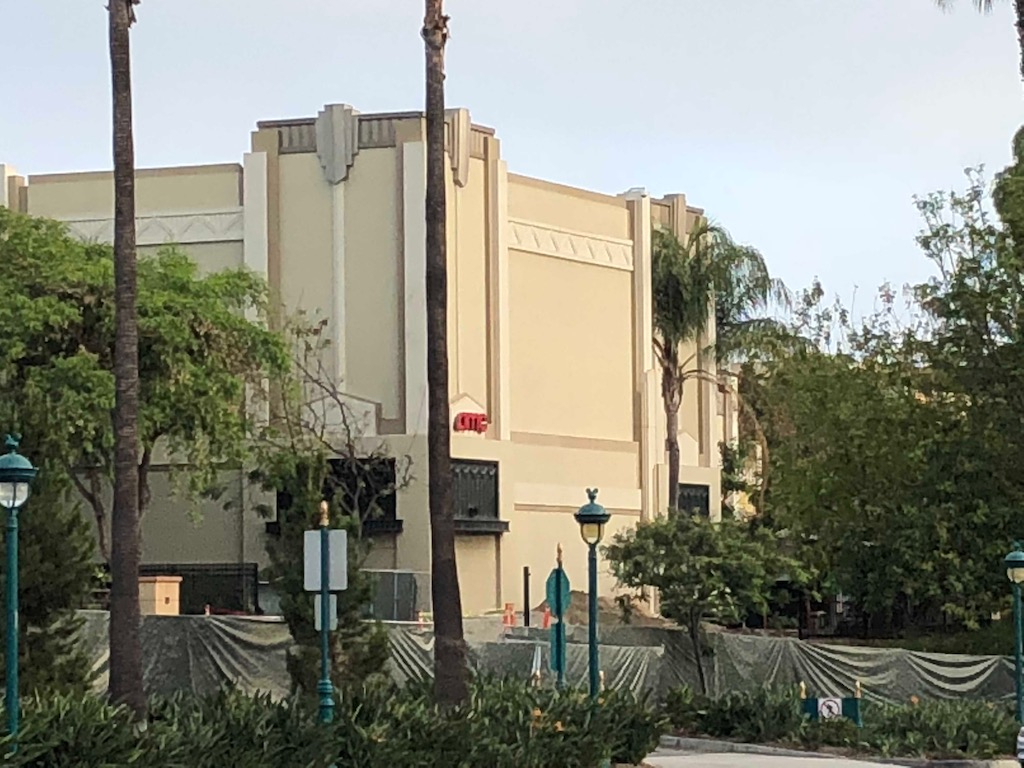 This construction area in the Grand Californian guest parking lot is near the former Richfield Gate.

This brings us to the present and the situation that has delayed the demolition of the west end of Downtown Disney. According to sources, during the course of routine work on the area near the former Richfield gate it was discovered that while the station had been demolished, the underground tanks had been left in place. The 60-year-old tanks, neglected for over 30 years, may have contaminated the soil and must be dealt with before any other work can proceed. 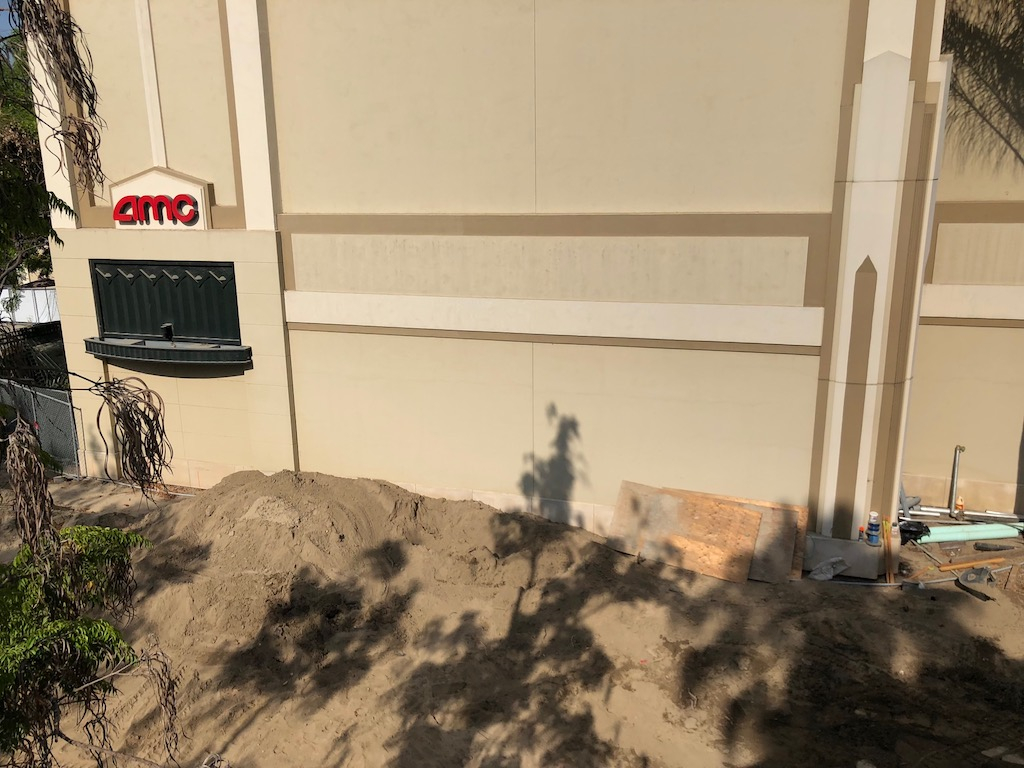 Work in the Richfield Gate area is visible from the monorail.

There has been no official announcement from Disney about this situation. No work has been done on an area that has been closed for weeks, however. 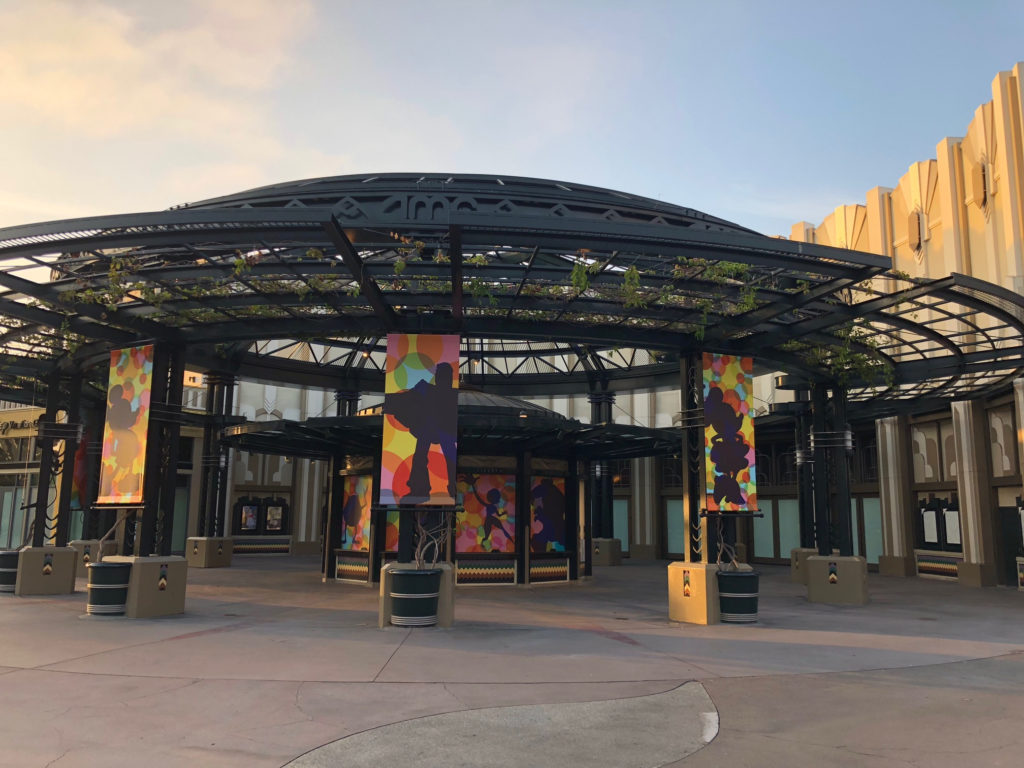 New banners were recently added to the shuttered AMC Theater, despite the fact that it is slated for demolition. 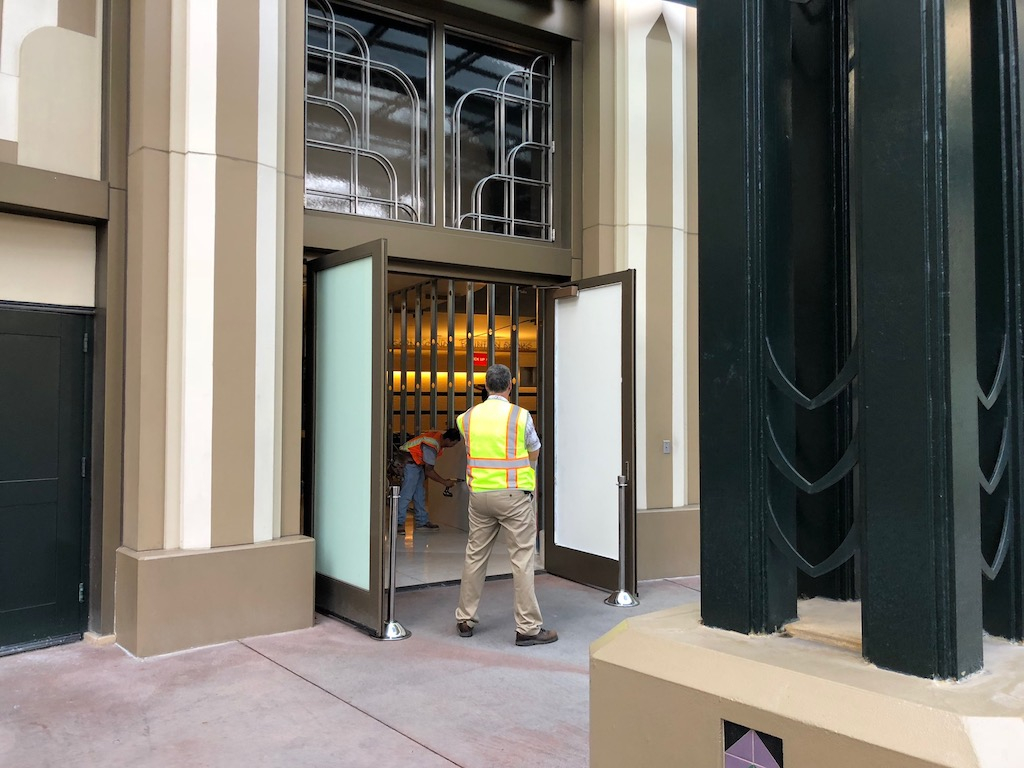 Work inside the lobby is not demolition, but rather construction of a new floor to ceiling wall.

It is possible that an alternative has been decided on for the west end security station. This week the shuttered AMC Theater building suddenly sprouted new banners and posters. Inside the building work crews could be seen—not performing demolition as anticipated, but rather building a new wall to route traffic through the building to the exits at the southeast corner of the building. It appears that Disney may be planning to move guests around the AMC Theater, through the exits at the southeast corner, and down an existing corridor to the front of the building. This would deliver guests opposite the monorail station and close to the area that was originally intended for guest access. It would also allow demolition work to begin on the ESPN Zone and Rainforest Café. In contrast to new banners and construction on the north side of the AMC Theater, sun-bleached posters can be seen on the west end of the building.

Donald Ballard of MagicalHotel.com, author of the book Disneyland Hotel: The Early Years sent us this image of the actual demolition order for the Richfield Station in 1976. The order notes “fill storage tanks.” At that time they were typically cut off and filled with dirt. In addition, Ballard sent an image of the hotel and the station just before it was demolished. You can see the monorail beam at the left center. The station is just to the right, with the signs removed. We will be watching and reporting on any updates as they are available.

UPDATE: It now seems that Downtown Disney’s shuttered west end will be hosting food trucks for a time. It’s unclear how long this offering will continue, but one truck’s schedule shows them appearing through next weekend.