Freeform Movie Review: “No Sleep ‘Til Christmas” (25 Days of Christmas)

Tags: 25 Days of Christmas, Freeform, No Sleep 'Til Christmas 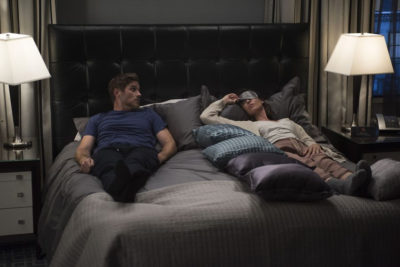 Freeform produced three new Christmas movies for their 2018 lineup of 25 Days of Christmas. The Truth About Christmas and Life-Size 2 were both a little underwhelming, but is the third time the charm? You can find out on December 10th with No Sleep ‘Til Christmas… or you can keep reading.

An engaged woman has killer insomnia, which is causing her to have problems in her party planning career and with planning her own wedding. On a late night drive, she accidentally runs into a jogger, who also suffers from insomnia. Once inside her car, the two end up having their first peaceful night of sleep in a long time, after which they enter into an agreement to secretly spend their nights together to get a good night’s rest. But as they question the reason behind this phenomenon, they can’t help but wonder if they were meant to be together. 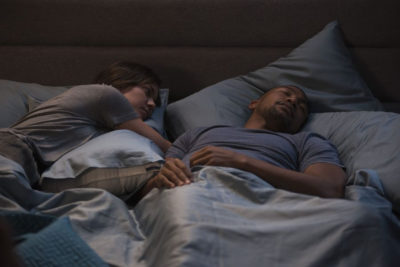 As with Life-Size 2, Christmas is an afterthought in the film. It could’ve taken place anytime of the year, but is conveniently set between Thanksgiving and New Years to get a ratings boost. In other words, the holidays feel shoehorned in and are inconsequential to the story.

Real-life husband and wife Odette and Dave Annabelle play the two insomniacs, both alumni of ABC’s Brothers and Sisters. Odette’s fiancee in the film is Charles Michael Davis, a familiar face from Grey’s Anatomy fans. It’s similar to how many of Freeform’s original programming is cast with former Disney Channel stars, only reversed to attract ABC viewers back to Freeform. The premise is certainly more mature than most of the network’s content and the dialogue is much less pandering, making this film a lot more watchable. There’s no millennial slang or trendy talk to make you groan in this FOM (Freeform Original Movie). 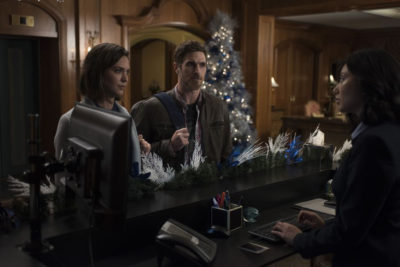 Is No Sleep ‘Til Christmas Freeform’s best original holiday movie of 2018? Yes, but it didn’t have tough competition and by all probability, you won’t remember it next year. I feel like Freeform is making a bid to give Hallmark Channel a little competition, but quantity is not quality and in all honesty, none of this year’s original films are worthy of being on the same lineup as the classic films included in the 25 Days of Christmas lineup. In other words, it’s the best of a bad situation.

No Sleep ‘Til Christmas takes two dissimilar characters and forces them together through a shared predicament, allowing them to fall in love at an inconvenient time. The plot meanders on its way to a predictable finish, but it’s not entirely unsatisfying. Also the title is a lie because they both do in fact sleep before Christmas.

I give No Sleep ‘Til Christmas 2.5 out of 5 hotel reservations under fake names.