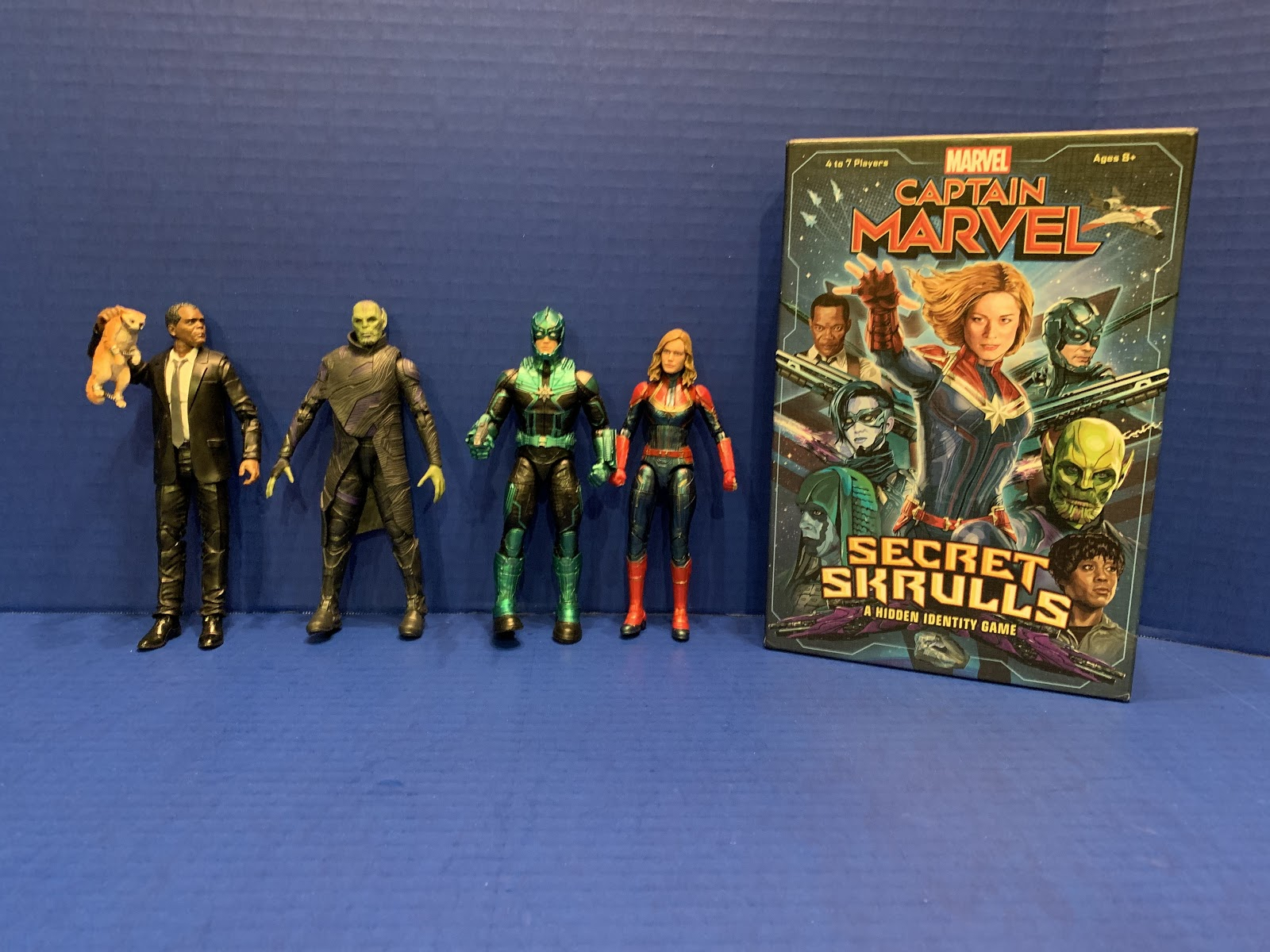 At Toy Fair 2019, we got to visit USAOpoly to get an early look at some exciting board games coming in 2019 based on Disney and Fox properties. While most of what we saw is embargoed until a later date, we received a review copy of their newest game themed to the upcoming Marvel Studios film, Captain Marvel. In Captain Marvel: Secret Skrulls, identities and motives are kept a secret and are sure to cause a few surprises amongst friends and families.

I had never played BANG!, a western themed social card game, but this game is based on it and includes that branding on the side of the box. Opening up the box reveals cards of varying sizes. There’s no game board to speak of, but a giant card helps players keep track of their secret identity, their character’s special abilities, and the weapon they are currently using. But I’m getting ahead of myself.

This game is perfect for large groups and requires a minimum of four players. While characters are distributed at random, at least one person has to be Captain Marvel. We went a little off course and decided to choose our own characters because it was more fun that way. This also leveled the playing field a bit as some characters are stronger than others, meaning they have a greater amount of damage they can take before they’re out of the game. 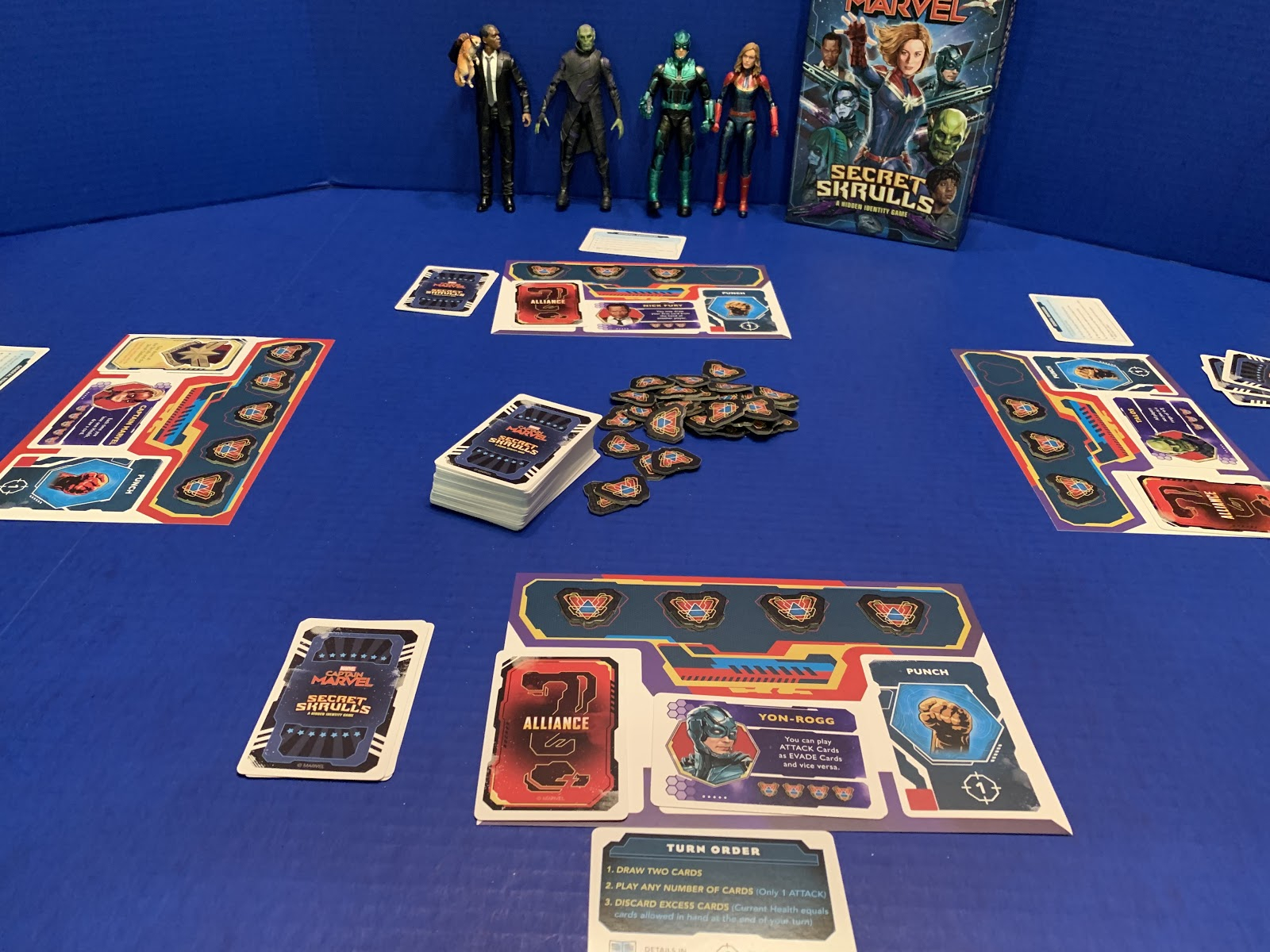 Players also choose a secret identity (except for Captain Marvel) and this includes being her ally, being a Skrull, or being a Skrull Deflector. While players know who is Captain Marvel, the identity of the other players is a secret they keep until they are either out of the game or, in the cast of an ally, they can reveal themselves once it is down to just them and Captain Marvel, claiming victory over the Skrulls. But certainly a defeat of Captain Marvel or her allies is a victory for the Skrulls and therefore a huge loss for all of mankind.

Within the deck of cards are actions and weapons. Players can only use one weapon at a time, but can play as many actions as they have cards during a turn, with the limitation of only being able to attack another player once. One aspect of the game that takes some getting used to is the concept of range. It’s easy to attack players to your immediate left or right, but the further a player is away from you in a circle, the more range your weapon and attack will need to reach them. The larger the group, the harder it gets to win.

The game play is heightened by the addition of some rare action cards. During our round, we went through the entire deck and found Goose to be the most fun. Once in play, players must continue to draw cards until they get a specific symbol. The player who receives that symbol loses three damage, which is typically a fatal blow as some characters only have three damage to begin with. But the player who initially puts Goose out there could be the one that is taken out of the game by their own action. I had a lot of fun playing Captain Marvel: Secret Skrulls. The instructions make the game sound tougher than it actually is and after just one turn, it becomes very easy to grasp the concept. Captain Marvel is shaping up to be one of the coolest moviegoing experiences of 2019 and for fans who want to keep the excitement alive afterwards, look no further than this group game for ages 8 and up.

Click here to see other reviews of Disney and Marvel USAOpoly games.

The action figures displayed in this post are by Hasbro. Click here to see more Hasbro Captain Marvel toys.