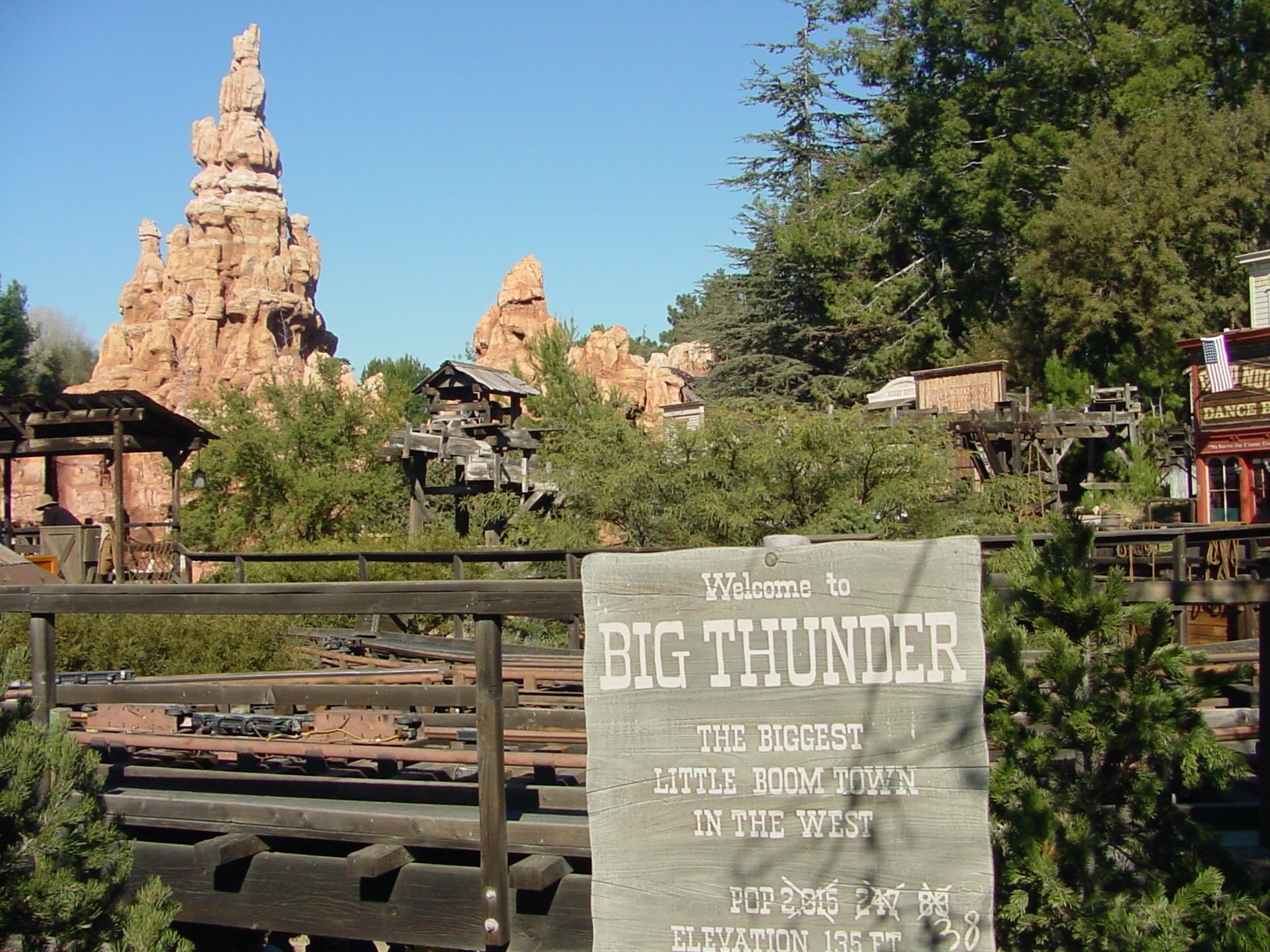 Big Thunder Mountain Railroad at Disneyland turns 40 today. Opening on September 2, 1979 – Big Thunder Mountain was the first “real rollercoaster” for many, many So Cal natives, including myself. For today’s Video Pick, I thought it would be fun to look back on two things I found on YouTube from the opening.

First is the commercial we would’ve seen for Big Thunder Mountain’s opening – Big Thunder Strikes! A commercial that shows not only the thrills of the ride, but the deep story Disney attractions are known for. Also pay attention at the very end … when Big Thunder opened, Disneyland wasn’t yet open 7 days a week!

The second video is a report from CBS8 news in San Diego, a two minute report from their nightly newscast when it opened in 1979. A fun look back at both the attraction and how it was covered in 1979 (including the ride going down for a while). The best parts are the short interviews with Disneyland guests.

Back on Big Thunder Mountain Railroad’s 20th anniversary, Laughing Place was just about one month old. One of our writers back then was Rick West of Theme Park Adventure Magazine. He wrote an article for us called “Big Thunder Strikes” about the history and development of the attraction. I’m very happy to represent that article again below.

On January 2, 1977, the Mine Train Thru Nature's Wonderland ceased operation after 16 1/2 years. In its place would soon rise Disneyland's third rollercoaster, Big Thunder Mountain Railroad. After six years of design, construction and preparation, Big Thunder Mountain Railroad made its official debut in Frontierland on September 2, 1979. Twenty years later it remains one of the more popular attractions at Disneyland and has spawned younger siblings in all four "Magic Kingdoms" around the world. It is, as Tony Baxter said, "the only mountain I know of that exists in four locations around the world!"

Big Thunder Mountain Railroad came out of a need to increase the popularity of Frontierland which had dwindled as the Mine Trains' Thru Nature's Wonderland became dated. Tony Baxter is Senior Vice President of Creative Development for Walt Disney Imagineering and the designer of Big Thunder Mountain. He said, in an interview in the Winter 1995 issue of E-Ticket Magazine, "There are people at the Park and elsewhere who simply can't evaluate a ride based on its nostalgic appeal. They have to look at the charts showing this year's ridership against last year's, which they assess against ride capacity." Baxter went on to say "This was the late 70's and Disneyland was being hit for the first time by other competing parks and their thrill rides. At the time that Big Thunder Mountain was designed, we had only the Matterhorn Bobsleds. Space Mountain opened during Big Thunder's design process."

So the go-ahead was given to Big Thunder Mountain Railroad. Alastair Dalls, an Imagineer at the time of Big Thunder's development, contributed the following background information to LaughingPlace.com:

I didn't work on Big Thunder, but it was on the drawing boards while I was working on EPCOT. A great guy named Joe Navarro managed the architectural drawing project (he was what Disney calls the Job Captain) and I remember that Lee Congiardo of the Interiors Department was the guy who collected the authentic props that are strewn about, particularly along the second lift. Of course, it was Tony Baxter's project start to finish. I'll bet Don Hilsen designed the track-he did for Space Mountain, which I worked on in 1976.

Marc Davis had done sketches for an upgrade to the Mine Train ride along the lines of the Jungle Cruise re-do he'd just done (the python, the gorillas in the camp) and they ended up using some of his new stuff on Big Thunder (the opossums, etc.). I'm not sure who came up with the dinosaur bones and the false splash down-the bones. Seems like Marc Davis, a little.

One thing I'll say for Tony [Baxter]; he has a great sensitivity for Disneyland Park. I remember talking with him on the big employee opening night. We were standing on the main walkway looking at the back side of Cascade Peak. Either I complimented him or he mentioned that he was proud of it, but we commented on the way the old mine train tracks now dangled over the calm water that used to be Bear Valley. It looked so peaceful; so real. It was as if it started out Mark Twain, with all Huck Finn's superstardom, and ended up Sterling North, the author of Rascal, a story about a boy and his raccoon in country that grown-ups keep telling him used to be a wilderness, but now is just the country.

Disney is also willing to go outside of the berm for inspiration and assistance. According to Rick West, publisher of Theme Park Adventure Magazine, "the Mine Train at Knott's Berry Farm had a major impact on Tony Baxter and can be seen throughout Big Thunder Mountain Railroad. The queue, the trains, even the climax are very similar". Baxter chose well as the Mine Train at Knott's was given a prestigious Themed Entertainment Association "Classic Attraction" award.

In Issue #8 of Persistence of Vision Magazine, in an interview with Didier Ghez, Tony Baxter discussed one of the challenges in building Big Thunder:

This was the very first ride that we did with the aid of computer design on the track. I would do a design and give it to the computer artists and he would tell me, "No, it won't work. The computer wants…" There is a spiral on Big Thunder, near the beginning of the ride, where it goes around and then heads back. The computer kept moving it over, because it did not want that much track there. It wanted to shorten the length of the track. And I wanted it in a certain place because it looked good as a design. I like the composition of the three summits, the pyramid composition of shapes. The computer kept moving the track which made the ride somewhat less attractive.

So nine times I did a new design that I thought would solve the problems and the computer would say no. So we built nine tiny models to check the look until the computer said, "OK, I will accept this. This one is OK." That was the one we ended up building. But it took nine designs before the computer approved!

They tried to do the computer design on Space Mountain in Florida. But it was so early in the evolution of computer design that much of the track profile was later worked out by hand to improve the smoothness of the ride. Big Thunder Mountain is the first ride where it is really fluid, very smooth, and a very good ride.

Whenever Disneyland replaces an attraction with a new attraction they try to keep a little piece of the old one somewhere in there. For example, Star Tours replaced Adventure Thru Inner Space, but you can still see the "Mighty Microscope" in the Star Tours film and a mini-atomobile is among the parts going around the queue in a basket. Big Thunder Mountain was no exception. The buildings at the conclusion of the ride are from the town Rainbow Ridge which could also be found in the original Pack Mules and Nature's Wonderland attractions. The dripping water and pools of colorful water in the main cavern are a tribute to the Rainbow Caverns portion of the Mine Train. And the dinosaur bones at the end an homage to the Mine Train.

Big Thunder Mountain is full of the little touches that separate Disney thrill rides from other amusement parks. Along the way you'll see animatronic desert creatures and everyone's favorite, the goat with the dynamite stick in his mouth. In real mines, horseshoes were hung at the entrance to the shafts for good luck. They are also placed throughout Big Thunder Mountain, but at the entrance to the earthquake shaft one has come loose and is hanging upside-down. Speaking of the earthquake shaft, it had a major upgrade a couple of years ago. Prior to that, there were rocks on very visible polls that fell slower and slower each year. The shaft was updated with fiber optics and shadows, the same technology as the Pirates of the Caribbean shadow fighters. All the props around the queue and throughout the attraction are real mining relics that Imagineering bought from various collectors and companies across America. And did you know the doors at the end of the earthquake shaft used to open for each train and close behind it?

Big Thunder Mountain Railroad is one of the most beautiful, well-themed attractions in Disneyland. Tony Baxter said, in the aforementioned E-Ticket Magazine interview, "I pride myself that when you look at Big Thunder, nowhere does it look like the rockwork was built around the train. It always looks like the train had to configure to the mountain. That's a big difference when you take a look around at the other parks." After 20 years it remains a favorite among park visitors. Though it's not very scary – as rollercoasters go – it is a wonderful starter coaster for the very young. It's tame enough for more timid riders while remaining fun for the more experienced. And that is something Walt Disney would be proud of!