Going into this trip I knew that I’d have to do a few hours of work one afternoon. Turns it out was on our Animal Kingdom day so I trudged my laptop with me through a couple of rides, then needed to find somewhere to spend some time working. My wife suggested Nomad Lounge and I’m so glad she did. I grabbed a seat outside, put my laptop on the table and had a wonderfully relaxing work experience with a couple of plant-based sliders, churros like I’ve never had them before and a fun, non-alcoholic beverage. Despite being outside, it was quite comfortable (there is indoor seating as well), it wasn’t crowded so I didn’t feel like I was taking up room and the Disney Wi-Fi was more than adequate for my needs. When I move back to Florida, I think I’ve found my new office. 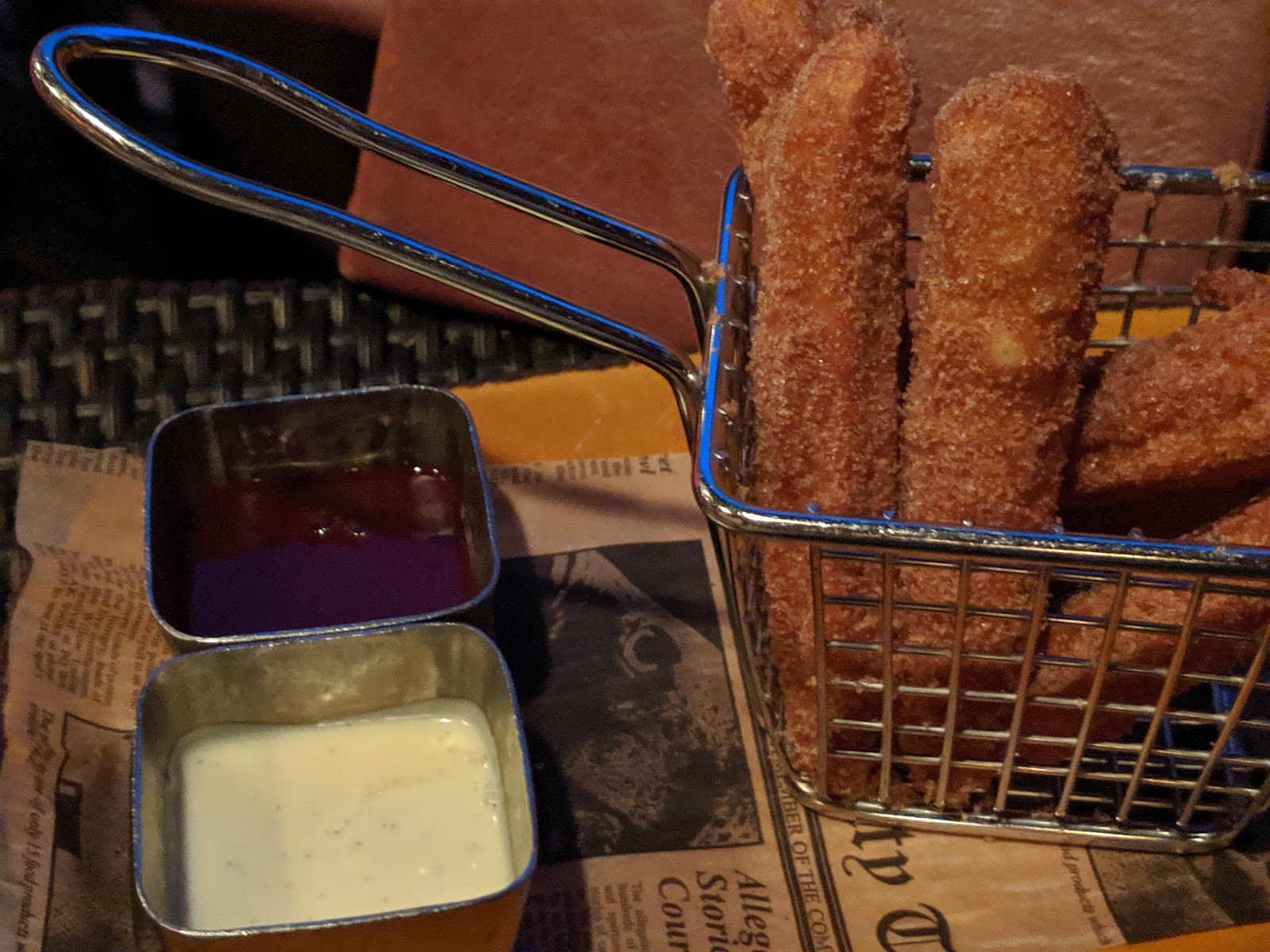 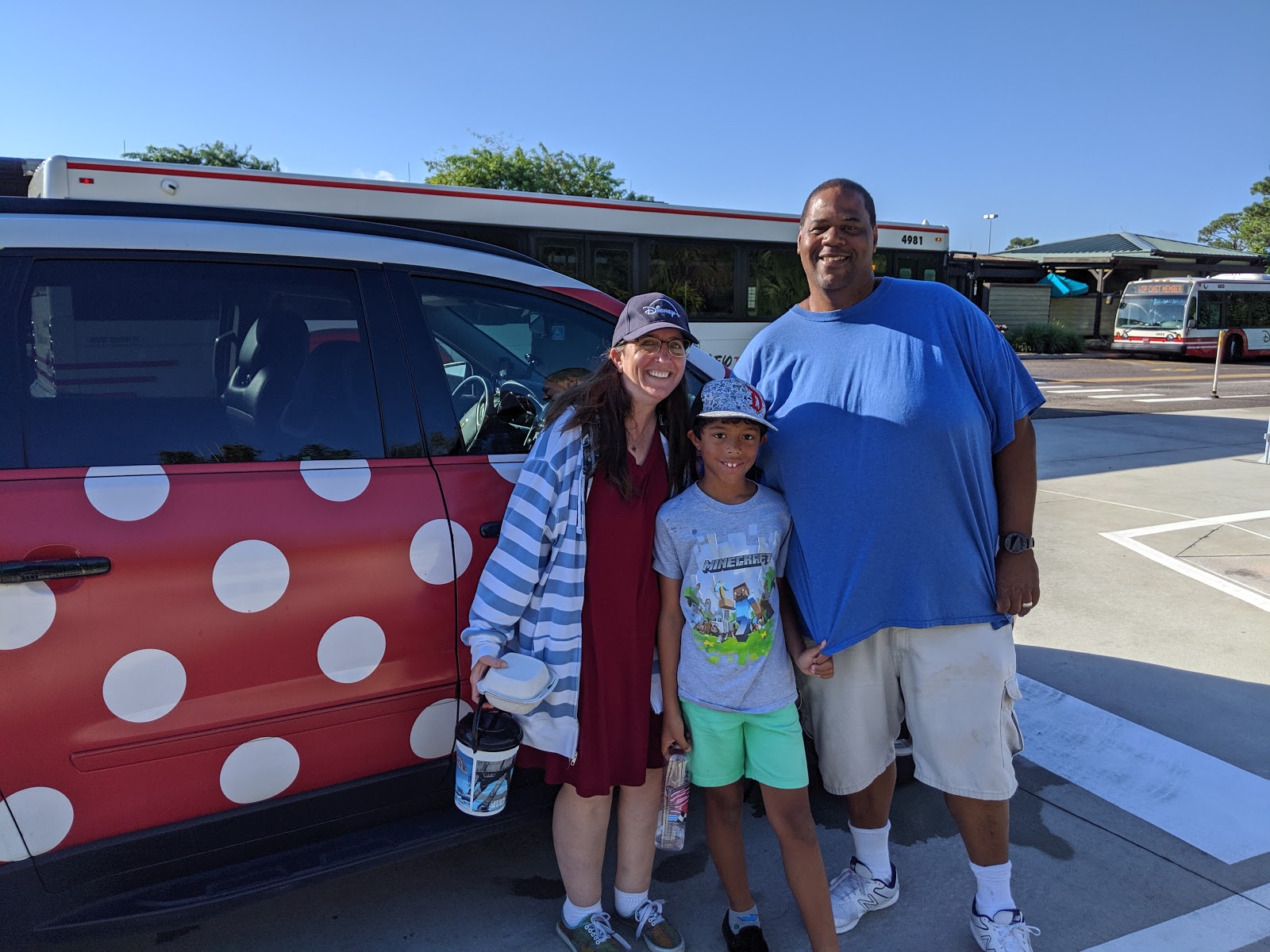 One of our days was planned to be at the Magic Kingdom in the morning and Animal Kingdom in the afternoon. So we decided to park at Animal Kingdom then travel to the Magic Kingdom and back. We had a party of four, none of whom had ever taken a Minnie Van. So this seemed like a perfect time to give it a try. The price was about $45 which is certainly steep, but that was the only negative. It took 13 minutes for it to arrive, but since we hailed it when we parked, we arrived at the pickup location (one of the bus stops) at the same time it did. Our driver Tim was wonderfully polite, funny and casual. He did a good job of picking up on our level of Disney-dom and acting accordingly. There was Disney music playing. The car was air-conditioned and had multiple charges. And unlike Uber or Lyft, we got dropped off right at the Magic Kingdom, not the TTC. The experience completely surpassed our expectations and we’ll definitely consider it as a transportation option in the future. 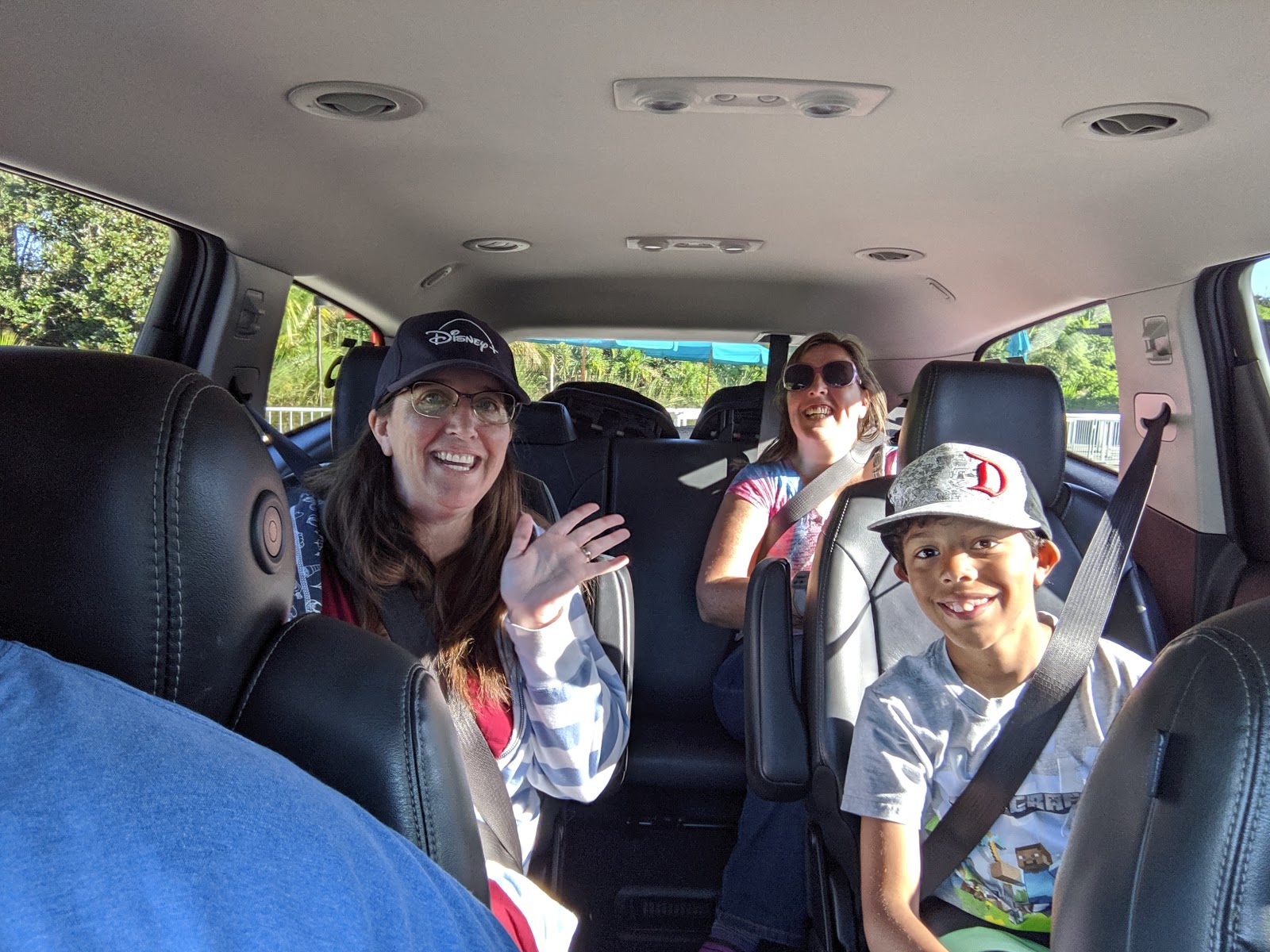 Despite all the press the Gran Destino Tower received upon opening, I knew next to nothing about it. Nor had I heard of its restaurant, Toledo. But a couple of people in our extended party really wanted to eat there, so we were happy to make it a big family outing. When we went to the elevator (and the Gran Destino Tower has a very cool elevator where you select your floor from the outside) and chose floor 16, I was so excited. I did not know this was a restaurant with a view. We stepped out of the elevator and immediately went onto the humongous balcony to a view unlike any I’ve seen at Walt Disney World. You can literally walk around and see the entire property from a relatively central location. I preferred it to the top-of-the-Contemporary view. Once inside the restaurant, I really liked the roomy layout. Some Disney restaurants can be quite cramped, but not this one. The service was mostly decent, but they did fall down by never bringing my son his dessert – we did finally got it to-go. And the food was really, really good (with the exception of the aforementioned dessert – maybe that’s why they didn’t want to bring it to us). And as a vegetarian for over 30 years who never really liked seafood anyway, I loved being able to order their Plant-Based Seafood dish featuring crab-cakes, calamari and scallops. Such a unique experience for this vegetarian. I can’t wait to try it again. What an experience! 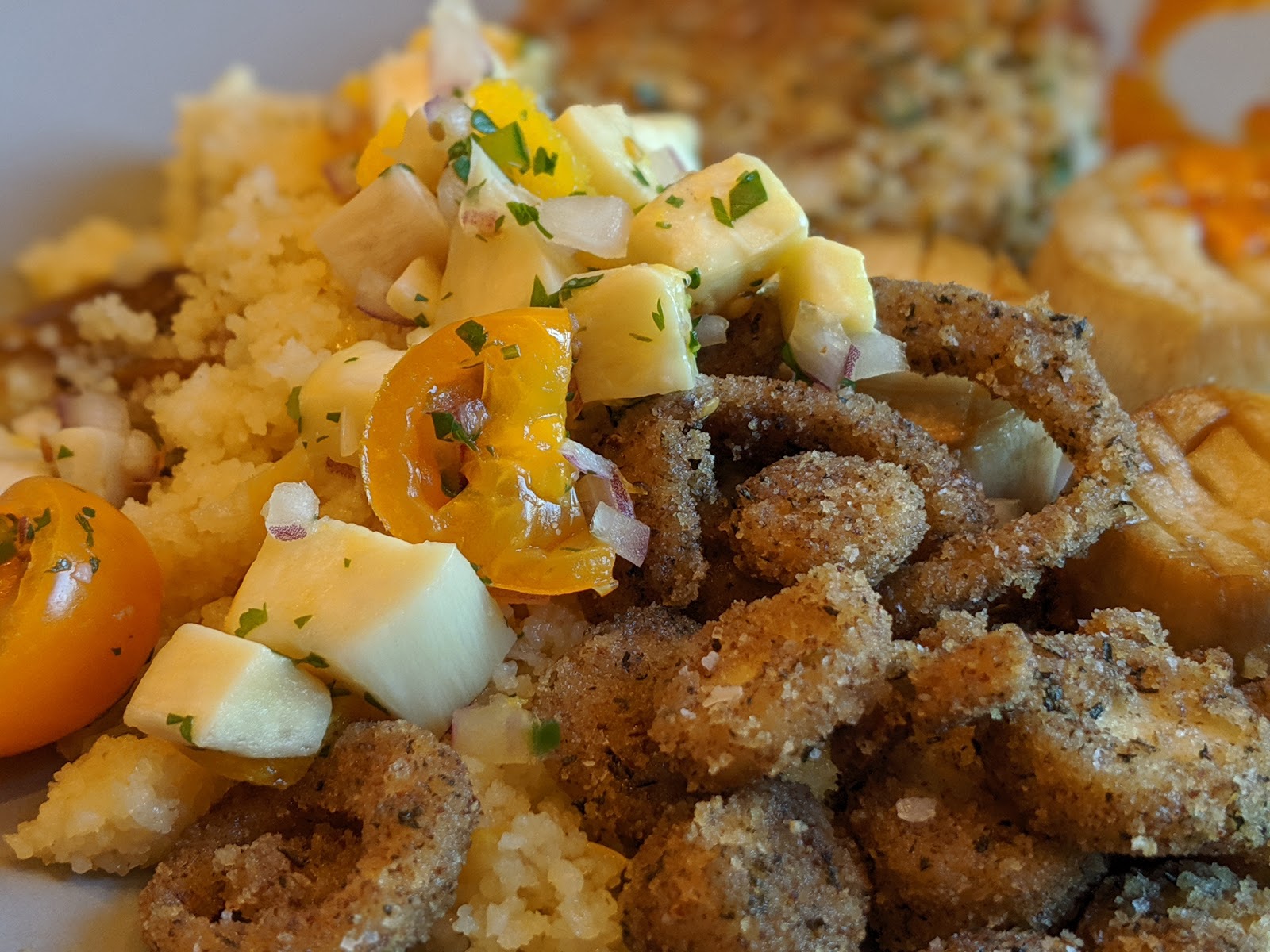 On my last trip to Disneyland, we only had a very short time in Star Wars Galaxy’s Edge. It was at night and most of our time was spent in Oga’s Cantina. So I feel like this was my first real visit to Galaxy’s Edge. I loved it! I like Star Wars, but I’m definitely not a fanboy. But I love being in an immersive environment. I think Disney really got this right. It’s huge, it’s multi-leveled, it has multiple paths – all things I love. The details are as great as advertised. And my favorite part is how it feels like a real location. Rather than meet and greets and shows, there are just characters going about their lives. I saw Chewbacca and Stormtroopers roaming around numerous times. Rey, Vi Moradi and others going about their business of inspecting and fixing their ships or looking for the Resistance. It just feels like we’re on Batuu among the locals. I completely love it. We also had lunch at Docking Bay 7 where I had some incredible Plant-Based meatballs. (Note: I did not forget about Smuggler’s Run. More on that in my next article). 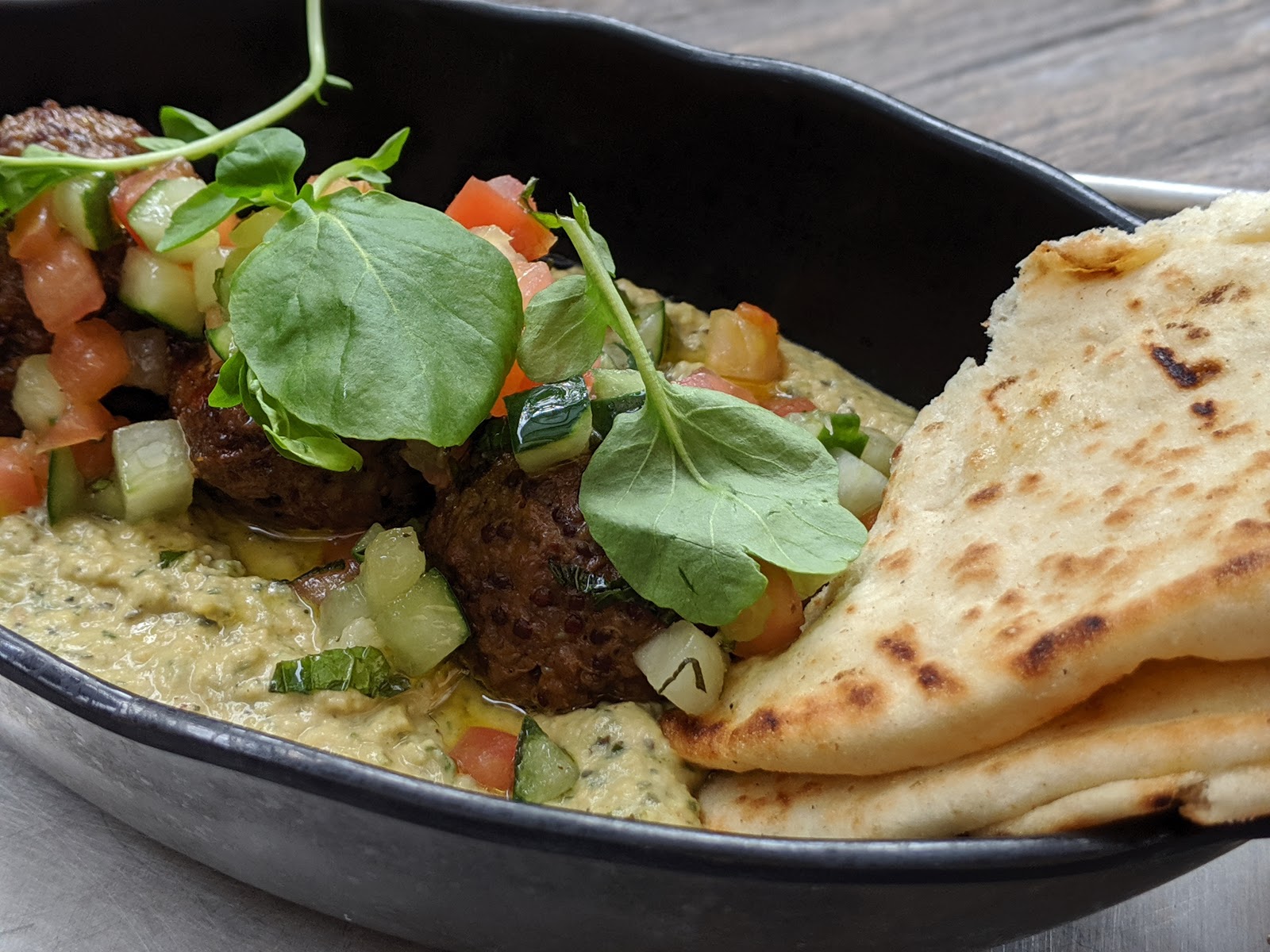 There is no question which experience was high above all the others this trip. I’ve been looking forward to the Disney Skyliner since its announcement. I love views of Disney World (see Toledo above) and looked forward to the new views this would bring. Little did I know the great view would be only part of the enjoyment. Here is why the Skyliner is so awesome:

Negatives? I don’t like the wraps from the inside. They’re worth it for the look they give from the outside. But how I wish there were a way to have them even less annoying from the inside. At night, with the light on inside the cabin that can’t be turned off, it’s sometimes impossible to see outside the cabin and that’s disappointing.

But that’s a tiny negative. The Disney Skyliner is now my favorite Disney ride. I hope you enjoyed reliving my best moments of our recent trip to Walt Disney World. Unfortunately, nothing’s perfect, so I’ll be back soon with the things that didn’t go quite as well. Until then…