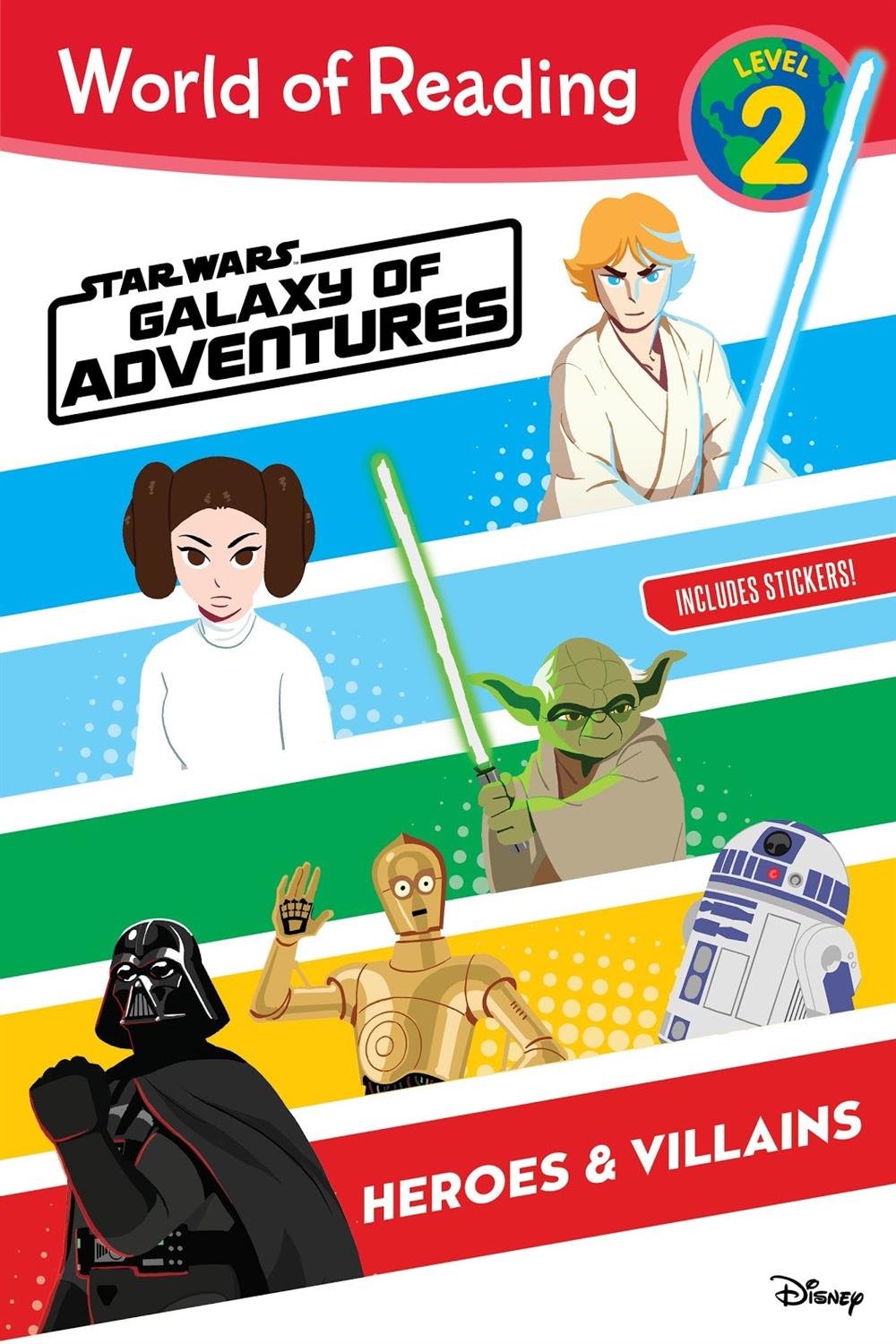 It’s another holiday season with a big Star Wars movie tie-in this year, and Disney is still making a focused effort to bring new young fans into the fold. Two more children’s books released over the past few months were designed as primers for the Star Wars universe, and they (not coincidentally, I’m sure) would make terrific stocking stuffers or gifts under the tree for the budding enthusiast of A Galaxy Far, Far Away in your life.

The first of these publications (which hit store shelves back in September) is entitled Star Wars: Galaxy of Adventures – Heroes & Villains, and takes kids page-by-page on a tour through the Star Wars franchise’s simplest concepts: What is a Jedi? What is the Force? What is a lightsaber? Who is Yoda? Who is Luke Skywalker? Who is Darth Vader? Writer Ella Patrick (Star Wars: Who’s Who in the Galaxy) then provides the most straightforward answers possible, boiling down each idea to a couple sentences or less in prose intended for readers from kindergarten age through second grade, with attractively cartoonish illustrations by Titmouse Animation (the studio behind the Star Wars: Galaxy’s of Adventures animated webseries from which this book takes its influence). I think if I were five years old, I would find Star Wars: Galaxy of Adventures – Heroes & Villains to be a fairly handy resource– if I suddenly forgot the name of Han Solo’s ship or what special Force power the Emperor possesses, I’d need only to flip to the necessary page (of which there are only a manageable 32). And in addition to factoid tidbits like noting that X-Wing starfighters fire red laser blasts while TIE Fighters fire green ones, Heroes & Villains also drops a few perhaps-accidentally profound observations: “A hero is someone who helps others so there can be peace. Peace is when there is no fighting.” Maybe in addition to becoming Star Wars fans, kids will also learn some valuable life lessons from this book. Plus it comes with stickers! 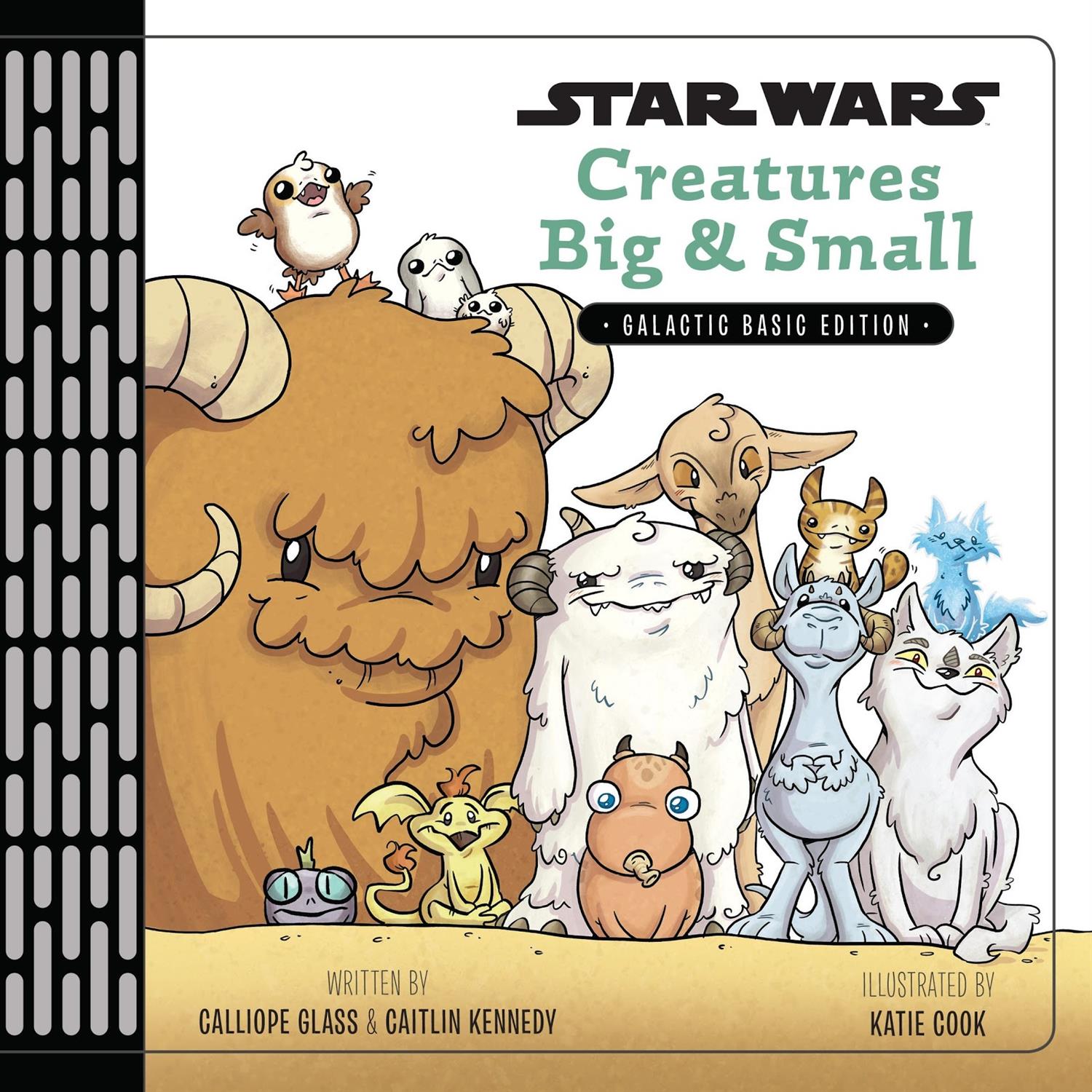 The second Star Wars children’s book I want to take a look at today is Star Wars: Creatures Big & Small (Galactic Basic Edition), written by Calliope Glass (Star Wars: ABC-3PO) & Caitlin Kennedy (Star Wars: C-3PO Does Not Like Sand) with illustrations by Katie Cook (Star Wars: Obi-123). Released at the beginning of October and narrated by a meditating Yoda from his swampy home on Dagobah, Creatures Big & Small is a Dr. Seuss-inspired journey across the galaxy as we learn about some of the many non-sentient alien species we’ve encountered in the Star Wars movies and television series. Porgs from Star Wars: The Last Jedi, Gorgs from Star Wars Resistance, Kowakian Monkey-Lizards from Return of the Jedi, Tookas from Star Wars: The Clone Wars, Puffer Pigs from Star Wars Rebels, Corellian Hounds from Solo: A Star Wars Story, Mynocks from The Empire Strikes Back, Kaadu from Star Wars – Episode I: The Phantom Menace. This book covers all the Star Wars bases from the prequels to the sequels, the original trilogy to the animated series. And it does so via a very amusing, tongue-in-cheek rhyme scheme that knowingly jokes about each entry’s positive and negative aspects. Some of these creatures are cute, many are dangerous, but all of them will have kids looking to spot their favorites the next time they watch one of the Star Wars films or shows on Disney+. I’m sure Disney and Lucasfilm would agree that it’s never too early to get your own younglings started on absorbing the countless details, character relationships, and creature names of the Star Wars universe. That’s why I’d absolutely recommend picking up both Star Wars: Galaxy of Adventures – Heroes & Villains and Star Wars: Creatures Big & Small to put a big smile on any kid’s face this holiday season.