Star Wars is very famously known as a cinematic pastiche– a mixture of influences recycled together into something new. Franchise creator and writer/director of several of its entries George Lucas has always cited a number of notable films that inspired his high-flying space opera, and now Alamo Drafthouse Cinema in Los Angeles is giving fans the chance to experience some of these memorable movies on the big screen as part of its “Cinema Behind Star Wars” series hosted by Lucasfilm Story Group member Matt Martin.

I had the pleasure of attending the first installment of the series, highlighting John Ford’s acclaimed 1956 Western The Searchers, and as an enthusiast of all things Star Wars and cinema, I couldn’t have been more satisfied. The evening opened with Matt Martin (who serves as creative story executive on a number of Lucasfilm projects including Vader Immortal: A Star Wars VR Series and Disney Parks’ Star Wars: Galaxy’s Edge immersive lands) giving a brief slideshow presentation on how Lucas borrowed specific themes, events, and moods from Ford’s beloved adventure and made them his own, in order to suit the needs of A Galaxy Far, Far Away. 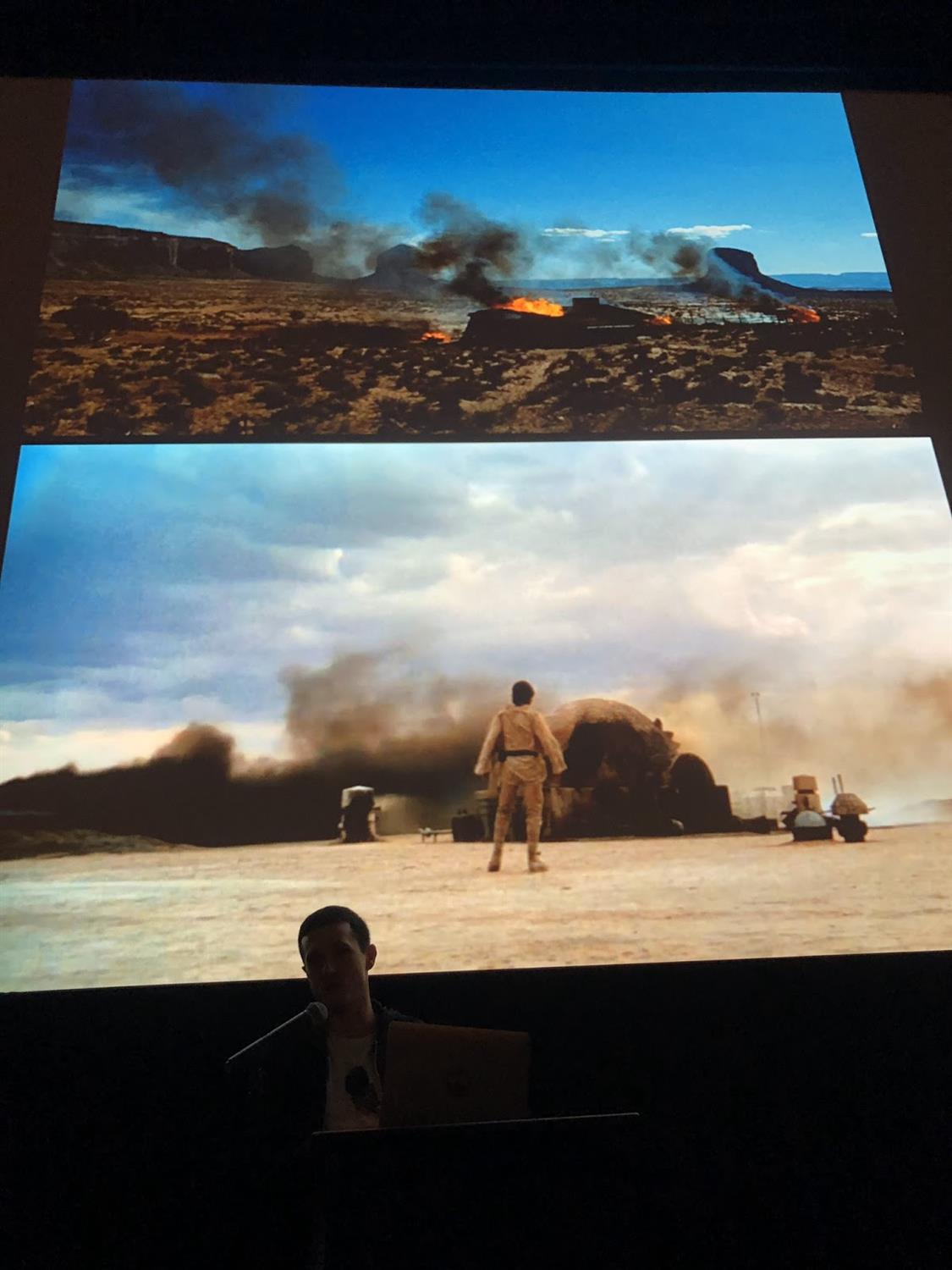 Martin cited the burning of the Lars homestead in the original Star Wars film (1977’s later-retitled Episode IV – A New Hope) as having come directly from The Searchers, but noted that 2002’s Episode II – Attack of the Clones drew even more inspiration from the esteemed Western. Anakin Skywalker’s raid of the Tusken Raider camp to find his mother Shmi in that film served as a fairly straightforward homage to the scene in Ford’s film in which John Wayne’s character and his companions infiltrate a Native American camp in order to rescue his abducted niece played by Natalie Wood. 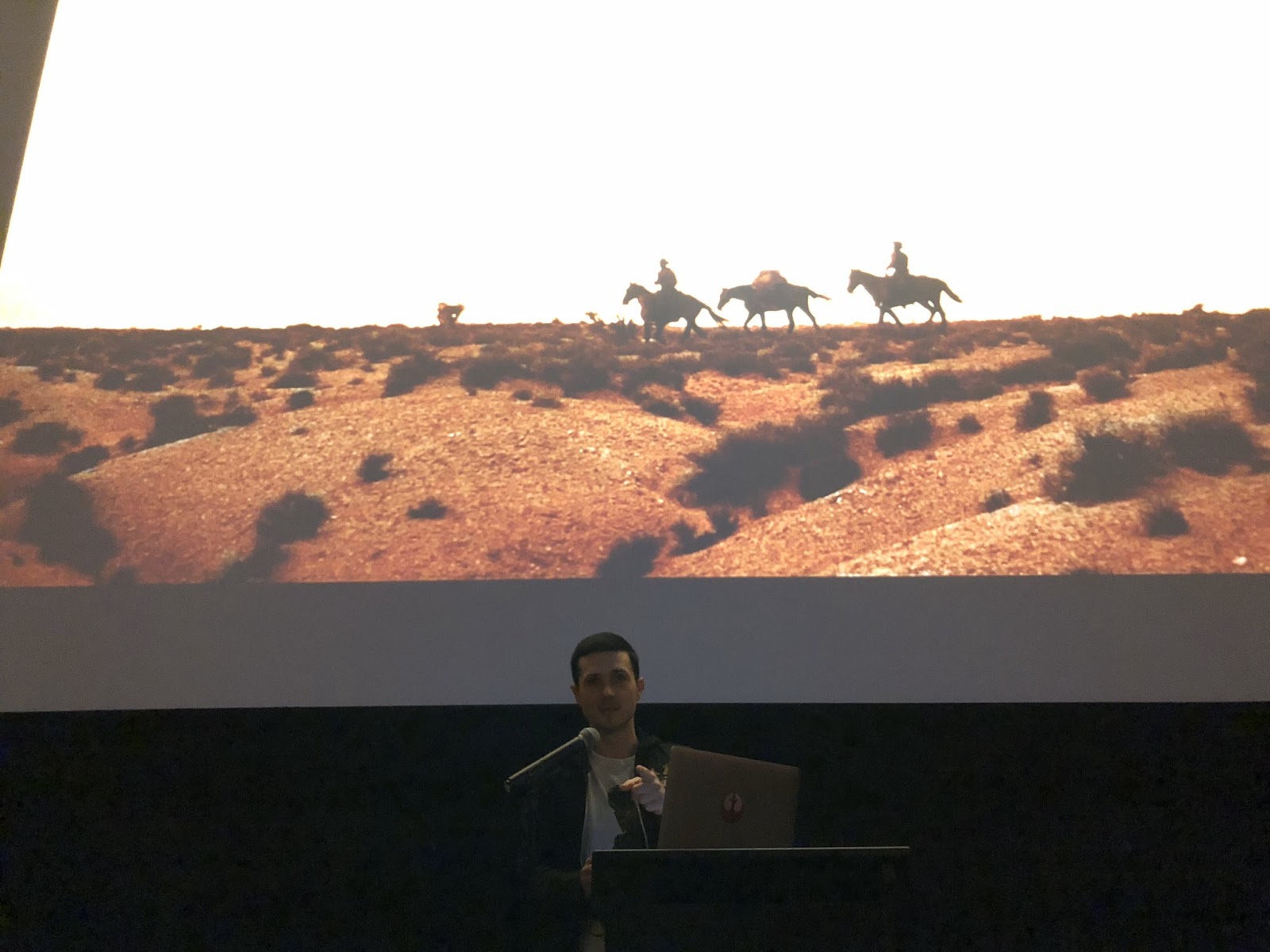 Indeed, A New Hope and Attack of the Clones do quote a number of shots directly from The Searchers’ enduring cinematography by renowned director of photography Winton C. Hoth (also remembered for his work on 1952’s The Quiet Man and 1949’s She Wore a Yellow Ribbon), but the larger point of Martin’s presentation was how much influence the Western genre as a whole had on Star Wars from its initial foundation. It’s a tradition that continues straight through to the current day and more recent entries in the series– perhaps most prominently the Disney+ live-action series The Mandalorian. 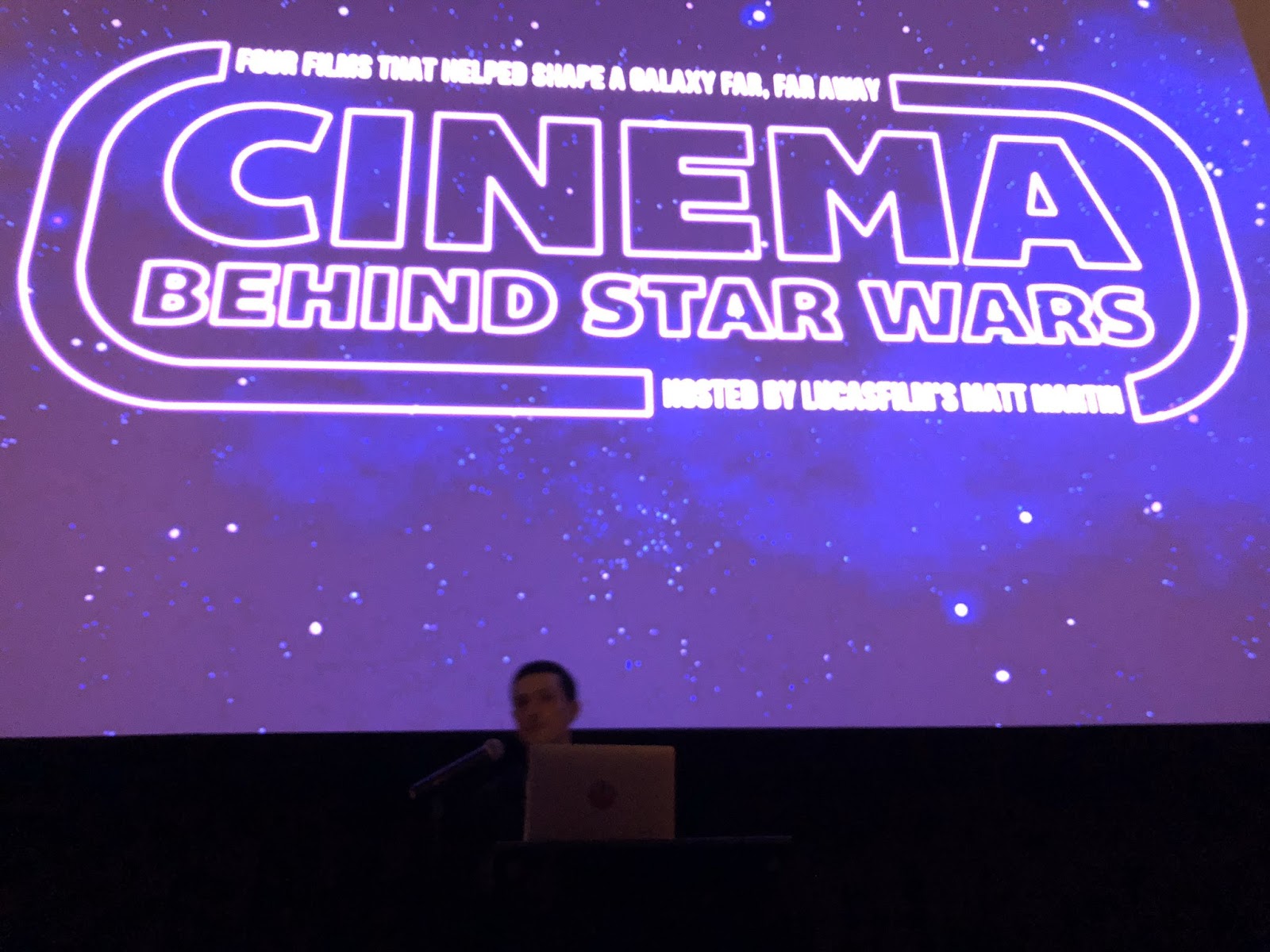 Matt Martin wrapped up his presentation with a quick Q&A, during which I felt compelled to ask him what happened to the Ark of the Covenant in Dok-Ondar’s Den of Antiquities at Galaxy’s Edge (the Raiders of the Lost Ark relic was visible as an Easter Egg on the second-level balcony of the gift shop for a while after it opened, but then suddenly disappeared). Martin replied that someone had complained that the prop wasn’t Star Wars-related, so it was then removed by Disney. He also remarked at how little this made sense because of the ever-intertwined relationship between the Indiana Jones and Star Wars franchises– not to mention the ark’s blink-and-you’ll-miss-it cameo appearance in Attack of the Clones— and I have to agree.

Favorite Easter Egg spotted so far in #StarWars #GalaxysEdge: the Ark of the Covenant from #RaidersOfTheLostArk. #IndianaJones #Disneyland @DisneylandToday pic.twitter.com/AgeoZNGmOz

The “Cinema Behind Star Wars” screening series will continue this Friday evening with Michael Curtiz’s 1942 classic romance Casablanca, and follows through for the remainder of January with George Lucas’s own experimental science-fiction film THX 1138 and Akira Kurosawa’s seminal samurai adventure Hidden Fortress. Though these three showings are already sold out, Matt Martin made sure to point out that Alamo Drafthouse has a standby policy that will allow hopeful attendees to fill any unoccupied seats. For more information be sure to visit Alamo Drafthouse Cinema’s official website.

As an added bonus, Alamo Drafthouse Los Angeles has a couple amusing points of interest for Star Wars fans: one is a mannequin display combining the creepy twin girls from Stanley Kubrick’s The Shining with an assortment of Star Wars memorabilia, and the other is a sign behind the movie theater’s bar welcoming guests to “Alamo’s Cantina” in the fictitious language known as Aurebesh. It’s nice to feel at home in a place like this.

1 of 2
Laughing Place recommends Alamo Drafthouse Cinema for the best film, food, and drink - all in one seat.