Hello and welcome to Laughing Place’s regular recap of the Disney XD animated series Star Wars Resistance from Lucasfilm Animation. This week the show aired two new episodes, entitled “The New World” and “No Place Safe,” and the first opened with Kazuda Xiono (voiced by Christopher Sean) repairing the Fireball when the Colossus begins shaking uncontrollably. Fearing an attack, he runs to the bridge, but finds that the movement was the result of turbulence from the station’s entry in the atmosphere of a new planet: Aeos.

Captain Doza (Jason Hightower) tells Kaz it’s time to stop running and that Aeos represents a new home and a safe haven for the crew and residents of the Colossus. Jarek Yeager (Scott Lawrence) sends the Ace pilots on a recon mission to check out the titular new world, and while out flying around, Griff Halloran (Stephen Stanton), Kaz, and their droids split off from the group to look around. They spot a seemingly abandoned village and they land to investigate, with Kaz learning more about why Griff left the Galactic Empire alongside Doza until they come across a beat-up First Order trooper helmet on the ground. 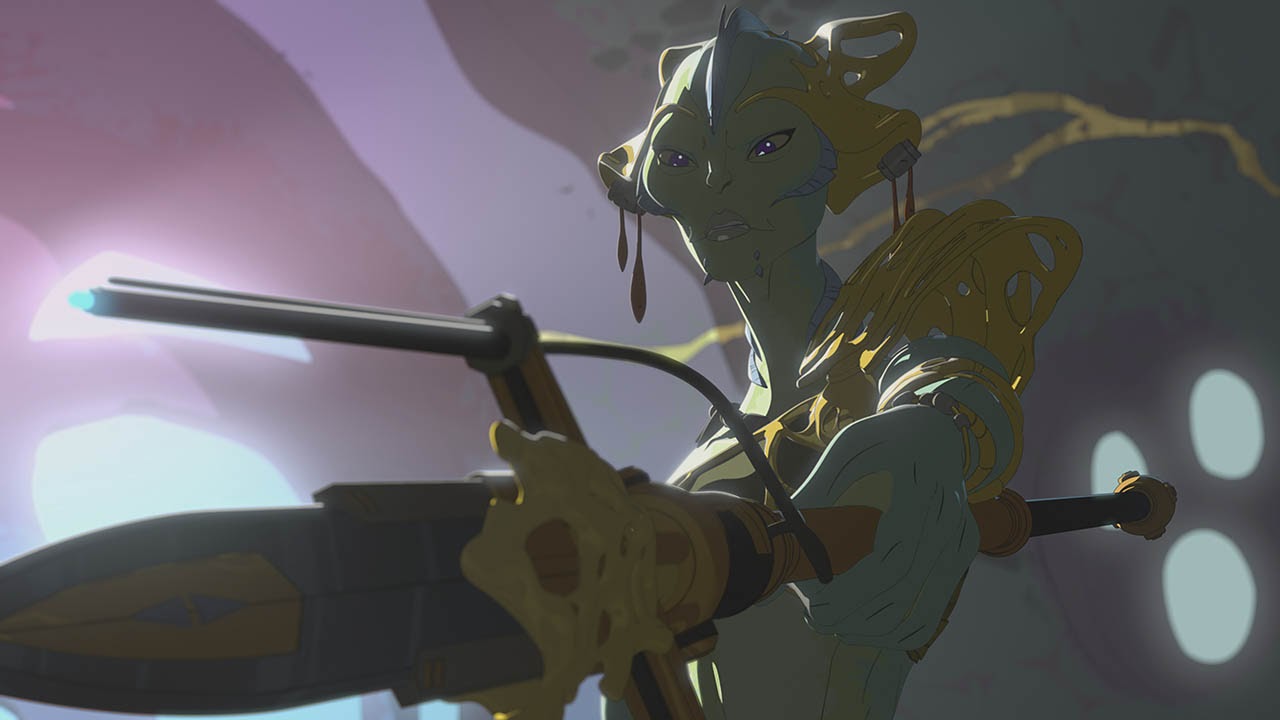 Suddenly Griff disappears and Kaz, searching for him, investigates a bioluminescent cave, when he discovers an old Rebel Alliance outpost. He tries to leave to report back to the Colossus, but is cornered and captured by an aggressive group of natives and thrown into laser jail next to Griff with no way to contact their friends. Doza and Yeager begin to worry that Kaz and Griff haven’t checked in when large flying sea creatures begin to approach the station with more natives riding on their backs. They land on a platform and Neeku (Josh Brener) tries welcoming them as “new friends,” to no avail. The B1 security droid (Matthew Wood) enters with his B2 underlings and attempts to take control of the situation, but the natives quickly fry his circuits, incapacitating him. A battle breaks out between the locals and the droids as the Aces get attacked by the flying creatures, and Yeager orders everyone to fall back. Meanwhile, the natives take Griff and Kaz out of jail and bring them before the Aeosian queen (Lucy Lawless of Xena: Warrior Princess fame). Kaz tries diplomacy in his usual clumsy way before discovering the queen speaks basic, and she accuses them of invading their planet and killing their healer, mistaking them for the First Order because of Griff’s Imperial tattoos. 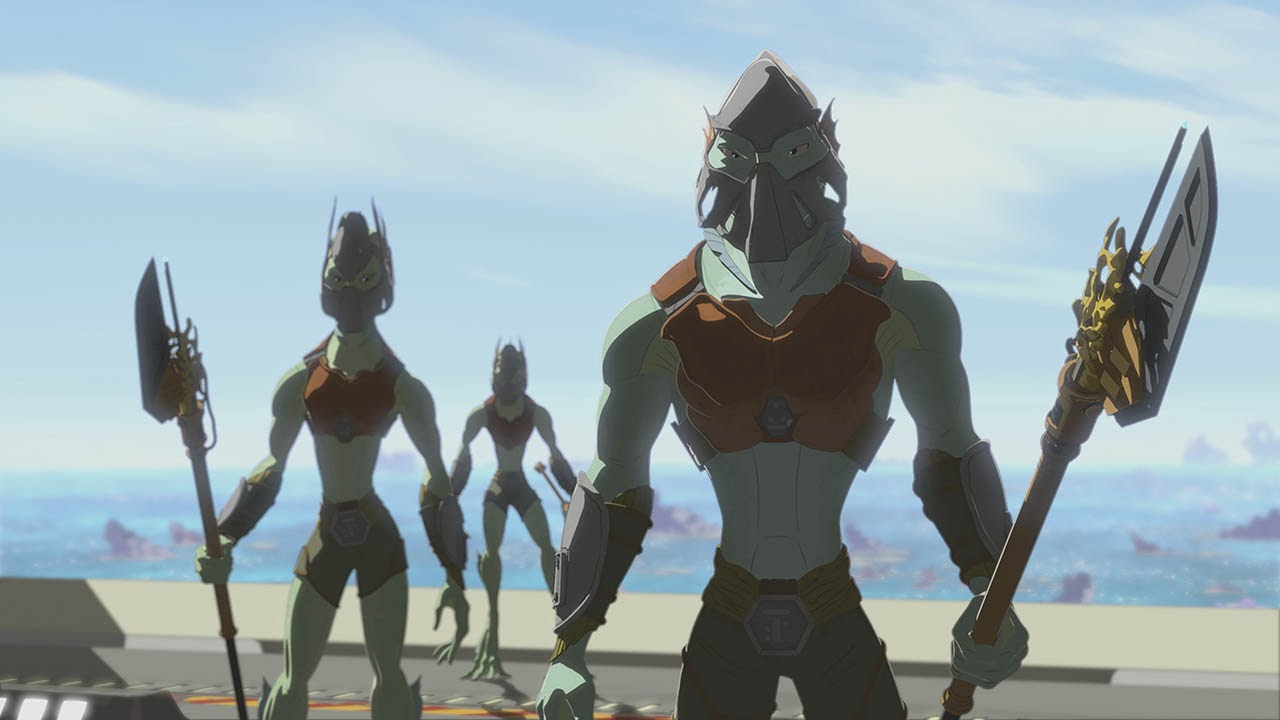 The queen orders Kaz and Griff to be fed to the krakavora– the flying sea creatures, but Kaz tells CB-23 it’s time for “Plan B.” The droid emits a cloudy gas, allowing them to briefly escape in the confusion. Kaz runs to where he saw some natives suffering in a medical chamber and injects them with bacta. When they immediately begin to recover, the queen decides to fly our heroes back to the Colossus on krakavora. They arrive just in time to stop the Aeosian forces from killing everyone on board the station and the queen talks to Yeager, brokering peace. Kaz gives the Aeosians a supply of medication and Doza apologizes for trespassing, differentiating the Resistance from the First Order. The queen declares they shall be allowed to stay, and Kaz tells Yeager his desire to fight has been reinforced. The second episode begins with the Colossus still on Aeos and the Aces flying among the krakavora. Doza is giving the queen a tour of the marketplace when Kaz tells Yeager he’s decided it’s time for him to leave to go join the Resistance in the fight against the First Order. He communicates with Norath (Daveed Diggs) via hologram and agrees to meet at a rendezvous point near Batuu– home of Disney Parks’ Star Wars: Galaxy’s Edge. Doza tells Kaz he respects his decision and that he is a good person. Meanwhile in space, the First Order star destroyer sends out probes as Commander Pyre (Liam McIntyre) is determined to track down the Colossus and Tam Ryvora (Suzie McGrath) is anxious to get back in the pilot’s seat of her TIE Fighter. Back on the Colossus, Neeku is in tears about Kaz’s decision to leave, but Kaz consoles the weeping Nikto by giving him his first racing trophy and says he’s become his “bestest” friend. Torra Doza (Myrna Velasco) is angry Kaz is abandoning them, shouting “Aces stick together!” but Yeager wants to speak to Kaz alone. He gives his young protege the Fireball, saying that Kaz has changed a lot since he first came aboard the station and that he is proud of him. Kaz departs with CB-23, but as soon as they leave the Aeosian atmosphere a probe droid spots the Fireball and fires on it. Using some tricky maneuvering, Kaz turns the droid’s homing missiles back on itself, but the Fireball gets disabled in the shockwave and a signal still gets out to the First Order. 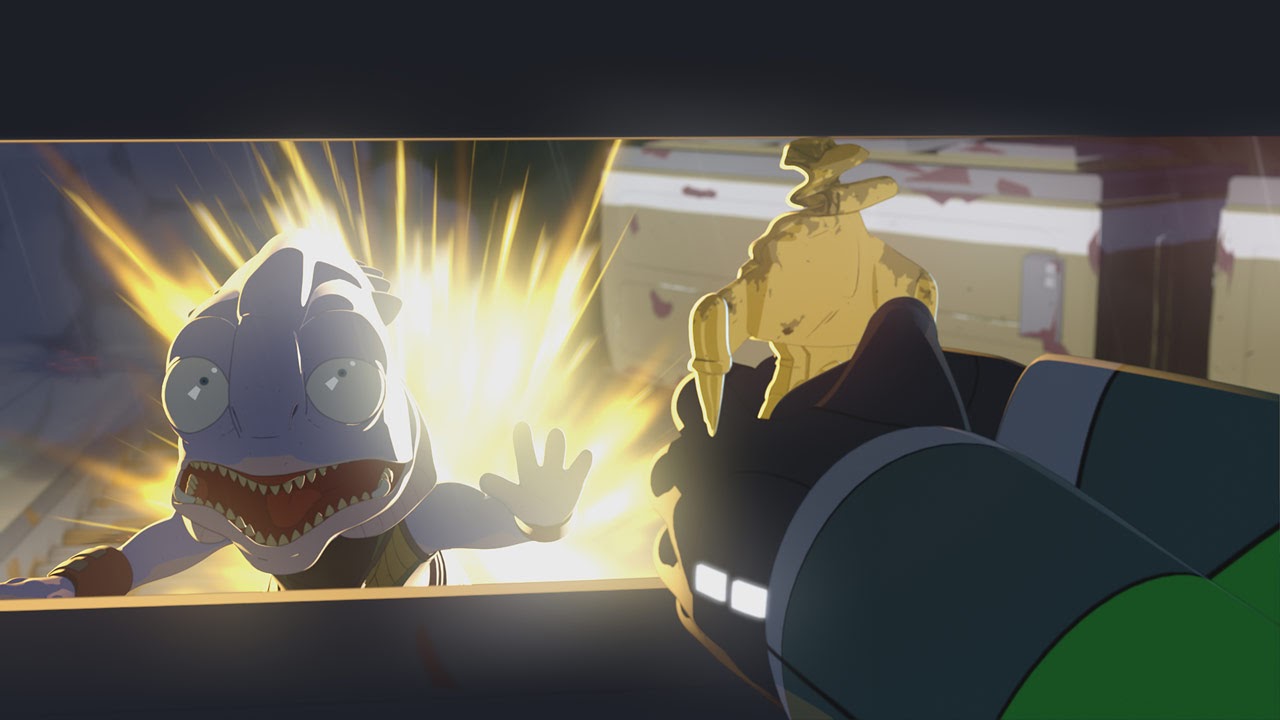 Pyre receives the transmission and immediately plots a course to Aeos. The TIE pilots are scrambled, but Tam hesitates. Kaz jump-starts CB and they manage to restore power to the ship. He decides not to leave to meet up with Norath, instead returning to the Colossus to warn his friends about the new threat. He gets a message to Doza just as the First Order arrives in orbit. Doza scrambles the Aces, but the Fireball is wrecked on the platform so Yeager lets Kaz use his personal ship. The Aeosian queen vows to help the Colossus escape, as TIE Fighters attack the Aces in the air around the station. Bombers target the deflector shields, but the krakavora and their native riders are able to take them down. 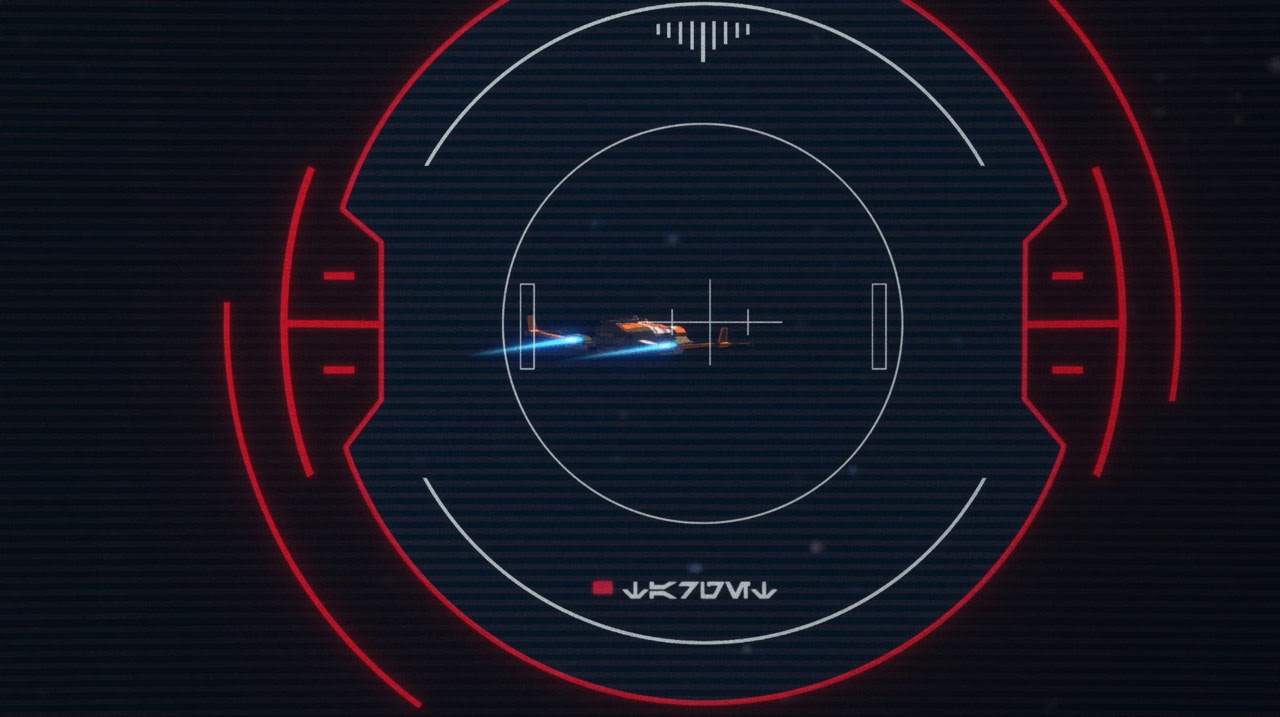 The star destroyer enters the atmosphere and the Aces decide to attack it head-on as a distraction so the Colossus can make its escape. In the battle, Tam locks onto Kaz but wavers for a moment, just long enough for Kaz to fire a proton torpedo at the star destroyer’s bridge. Tam snaps back into action and instinctively blows the torpedo out of the sky, impressing the First Order officers observing from the bridge. The Aces land back on the Colossus and the station jumps into hyperspace. Kaz talks to Yeager and says he is needed most on the Colossus. He also somehow knows it was Tam who locked onto him, and Yeager says they need to turn their backs on her like she did to them. But little do they know Tam has been promoted to second squadron commander thanks to her quick thinking in combat… 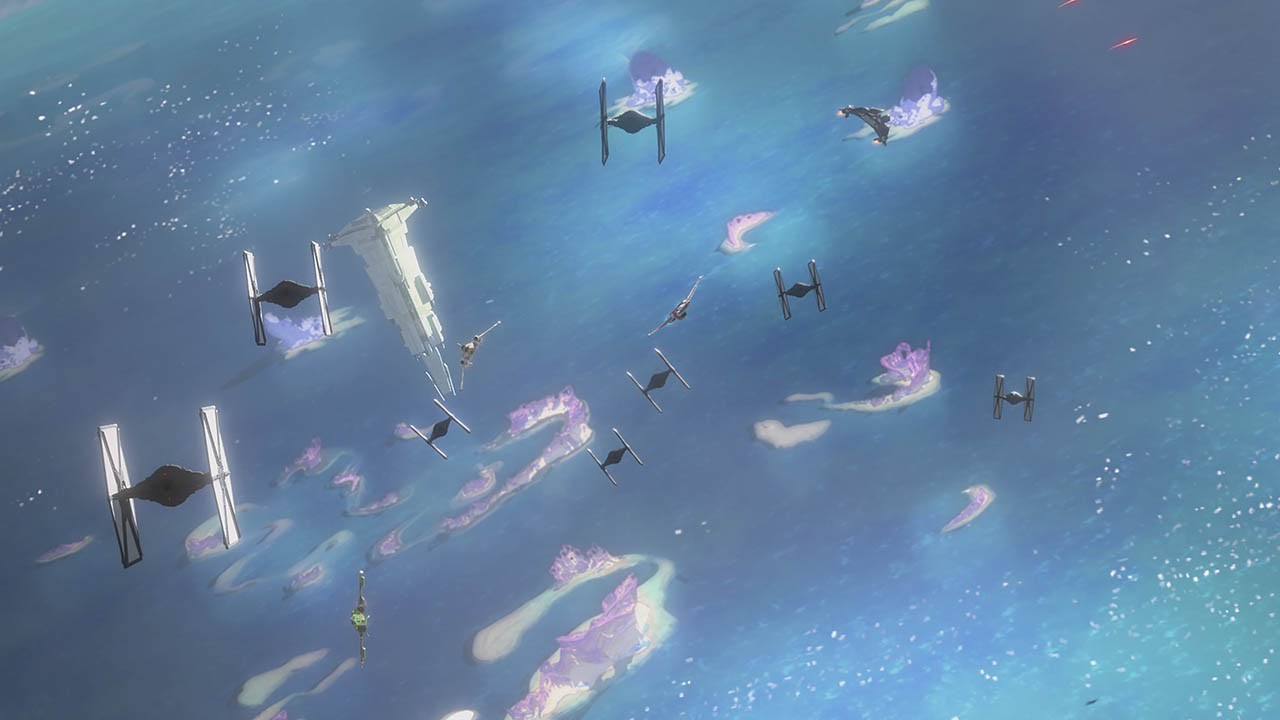 Next week: “Rebuilding the Resistance”