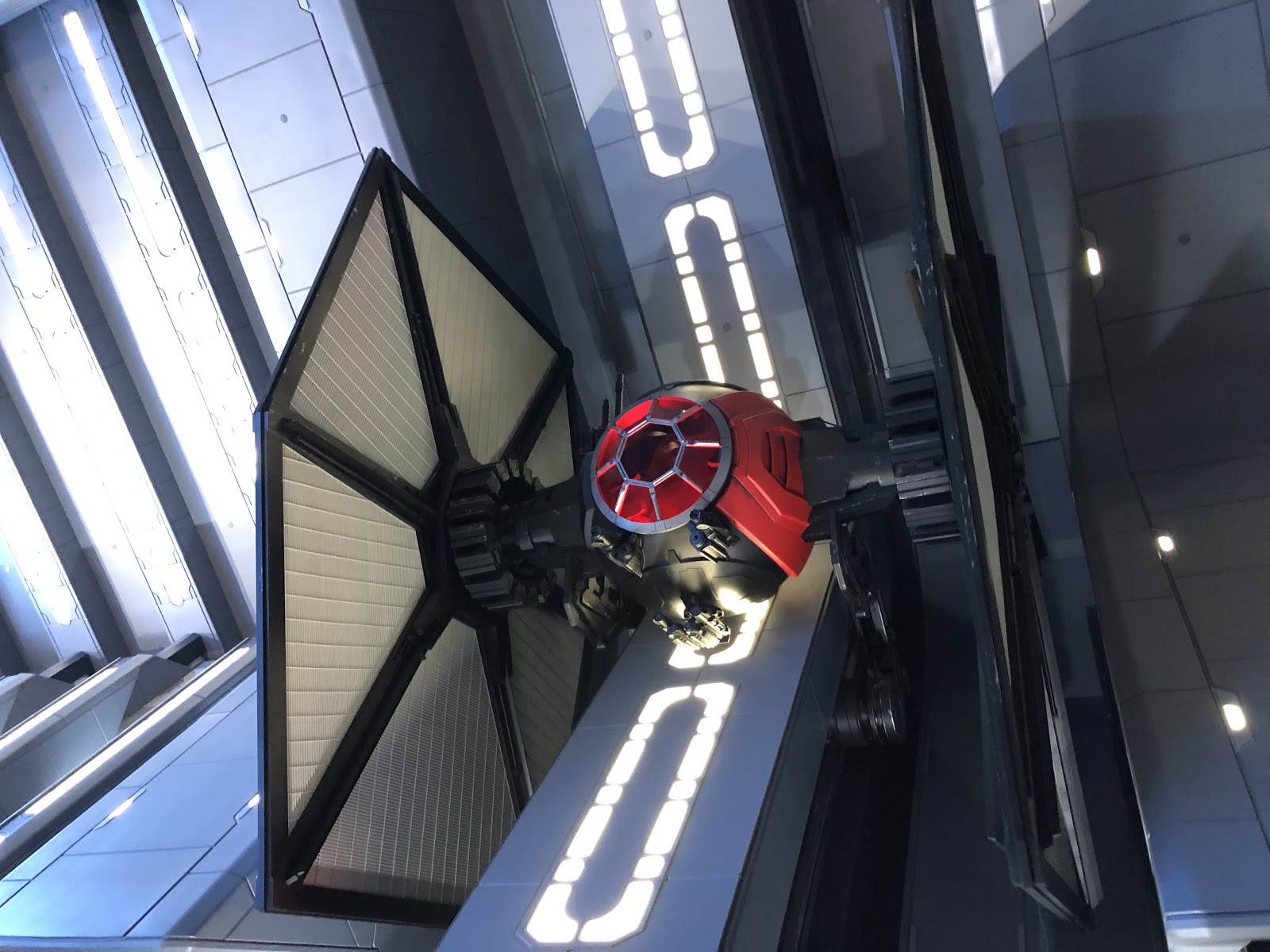 After nearly five years of waiting since the Star Wars: Rise of the Resistance attraction was first announced (and about six weeks after it first launched at Walt Disney World in Florida), Southern California theme park fans can finally join the Resistance at Disneyland’s Star Wars: Galaxy’s Edge.

Guests lined up from the very early morning hours to be among the first admitted through Disneyland’s front gates for opening day of Star Wars: Rise of the Resistance, but once they started flooding into the park around 5:45 AM, there was still more than two hours to wait until the virtual queue system opened and they could begin joining boarding groups. This meant big crowds along Main Street, USA and very long lines for Disneyland’s Starbucks location. 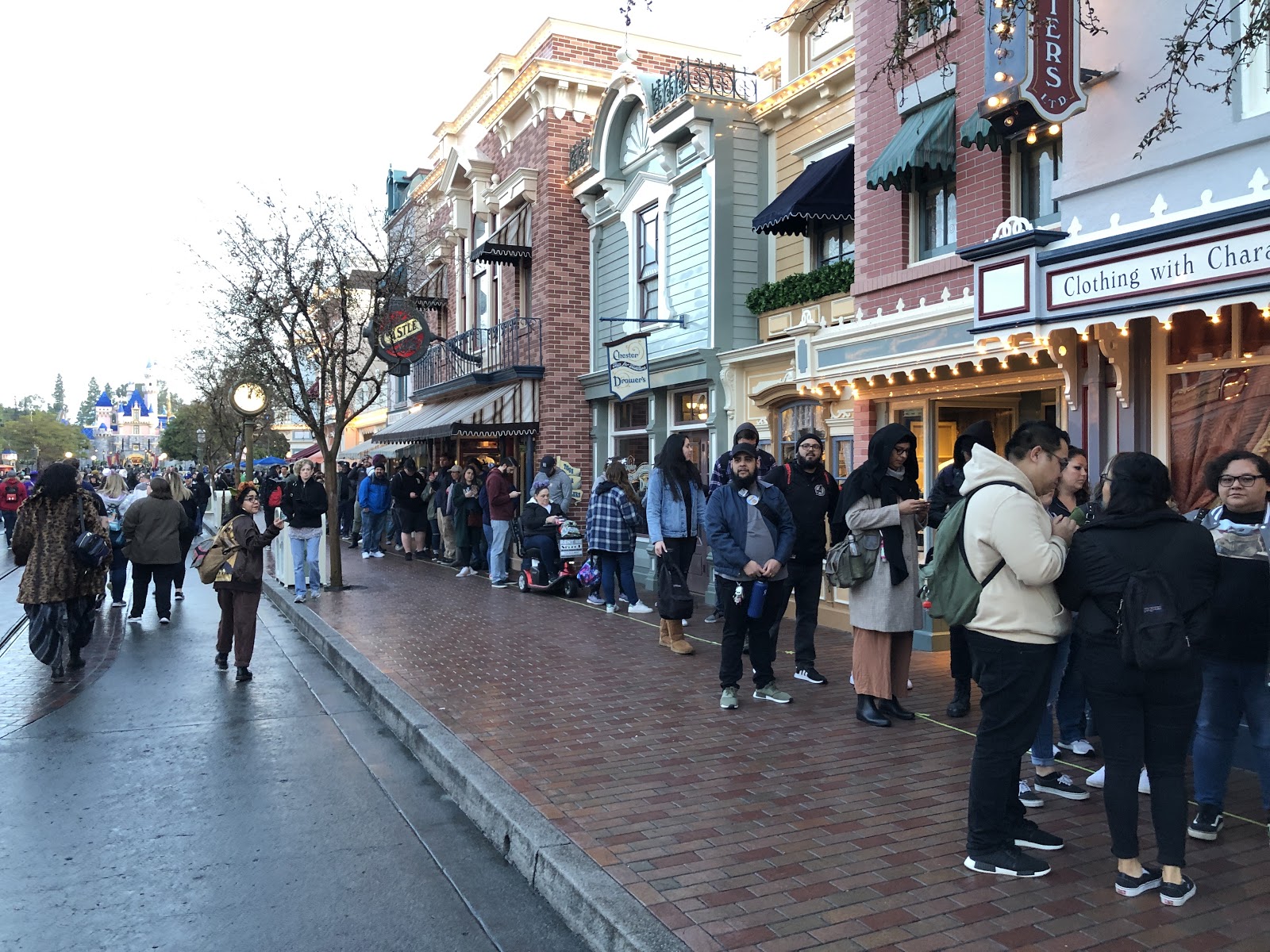 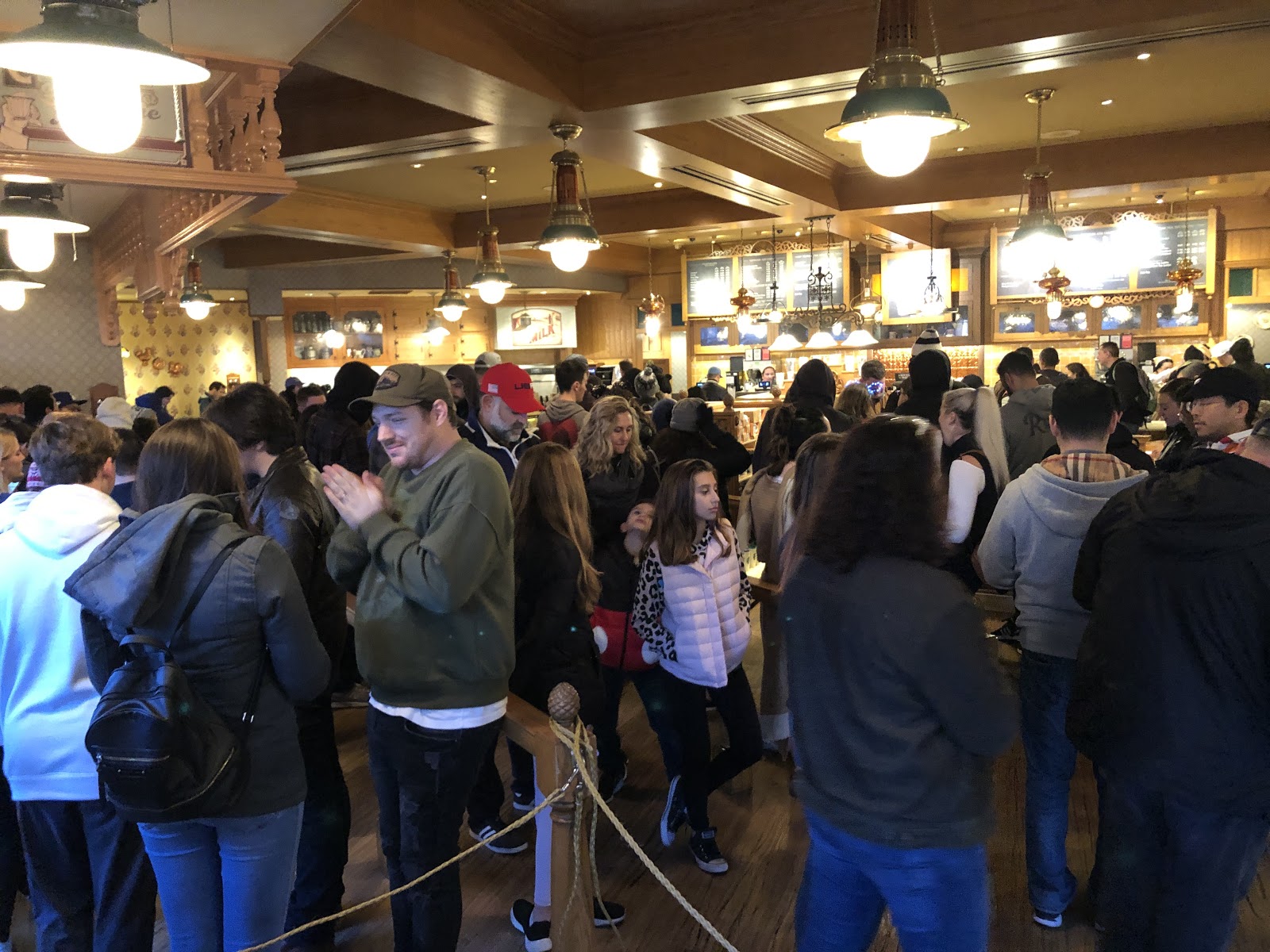 Then, once 8:00 AM rolled around, everyone waiting in the park pulled out their phones, booted up the Disneyland app, and took a stab at getting a boarding pass for Star Wars: Rise of the Resistance. After a minute or so of traffic clogging up the app, we ended up with #91, which should put us on the attraction sometime in the late afternoon unless the attraction experiences delays due to technical difficulties. Cast Members had passed out informational flyers before the park opened, in case anyone was unfamiliar with the virtual queue process. 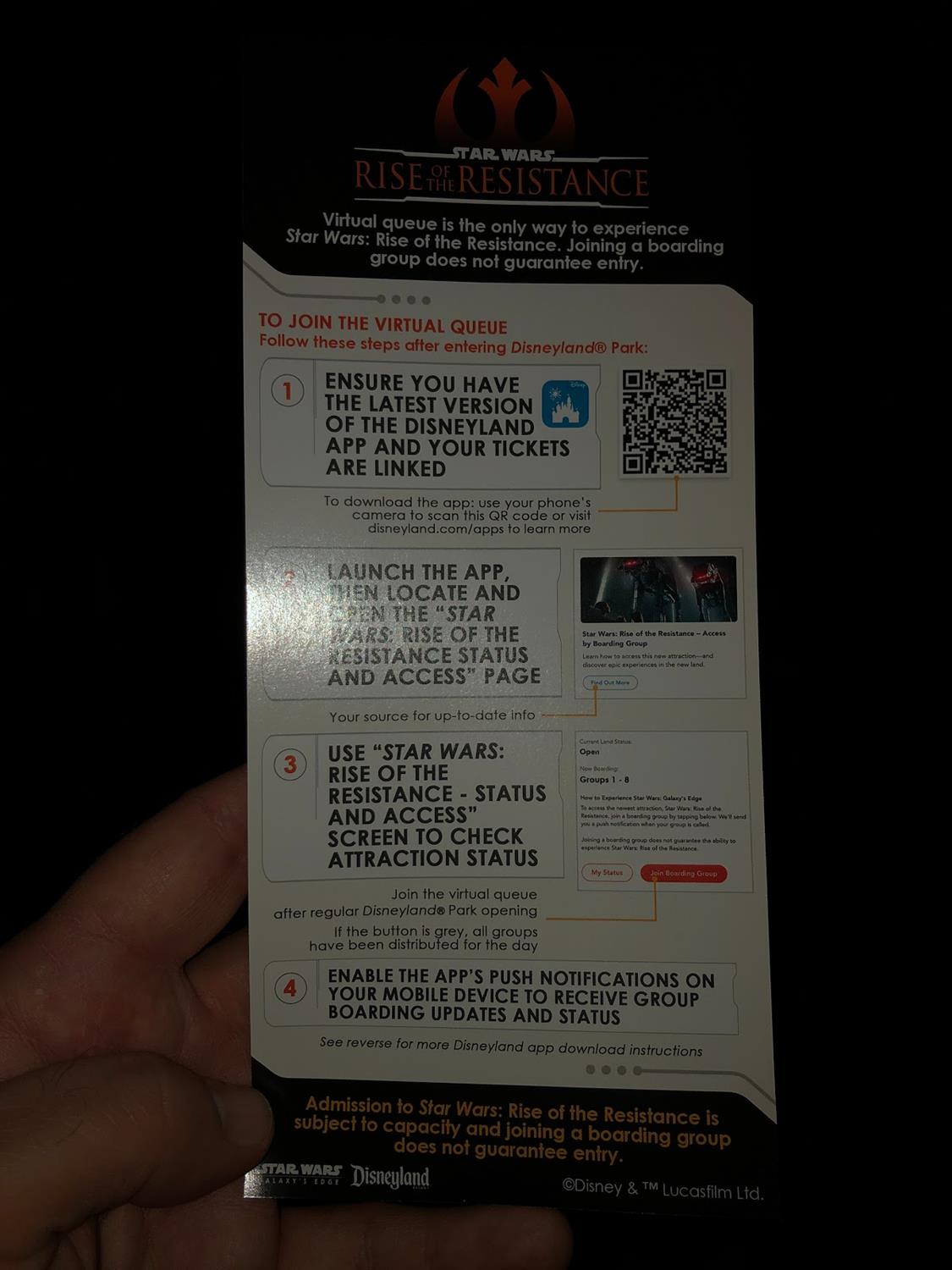 After Disneyland finally opened, a crowd began to gather around the entrance to Star Wars: Rise of the Resistance in Galaxy’s Edge, and though many guests with lower boarding pass numbers seemed ready to go right off the bat, the attraction did not begin welcoming riders until around 9:00. Resistance spy Vi Moradi, loyal Wookiee companion Chewbaca, and that lovable droid R2-D2 were on hand to welcome the first visitors through the gate.

Watch Live from Disneyland – Opening Day of Star Wars: Rise of the Resistance:

I had the wonderful opportunity to enjoy Star Wars: Rise of the Resistance yesterday during Disneyland’s media preview for the attraction, and I have to say I was very impressed by the sheer scale and potency of this remarkable new effort from Walt Disney Imagineering. As those who experienced its east coast counterpart over the past month and a half have already noted, this ride absolutely adds up more than the sum of its parts. It is indeed undeniably thrilling, but the most extraordinary aspect of this adventure is how its thrills are only one part of the story. 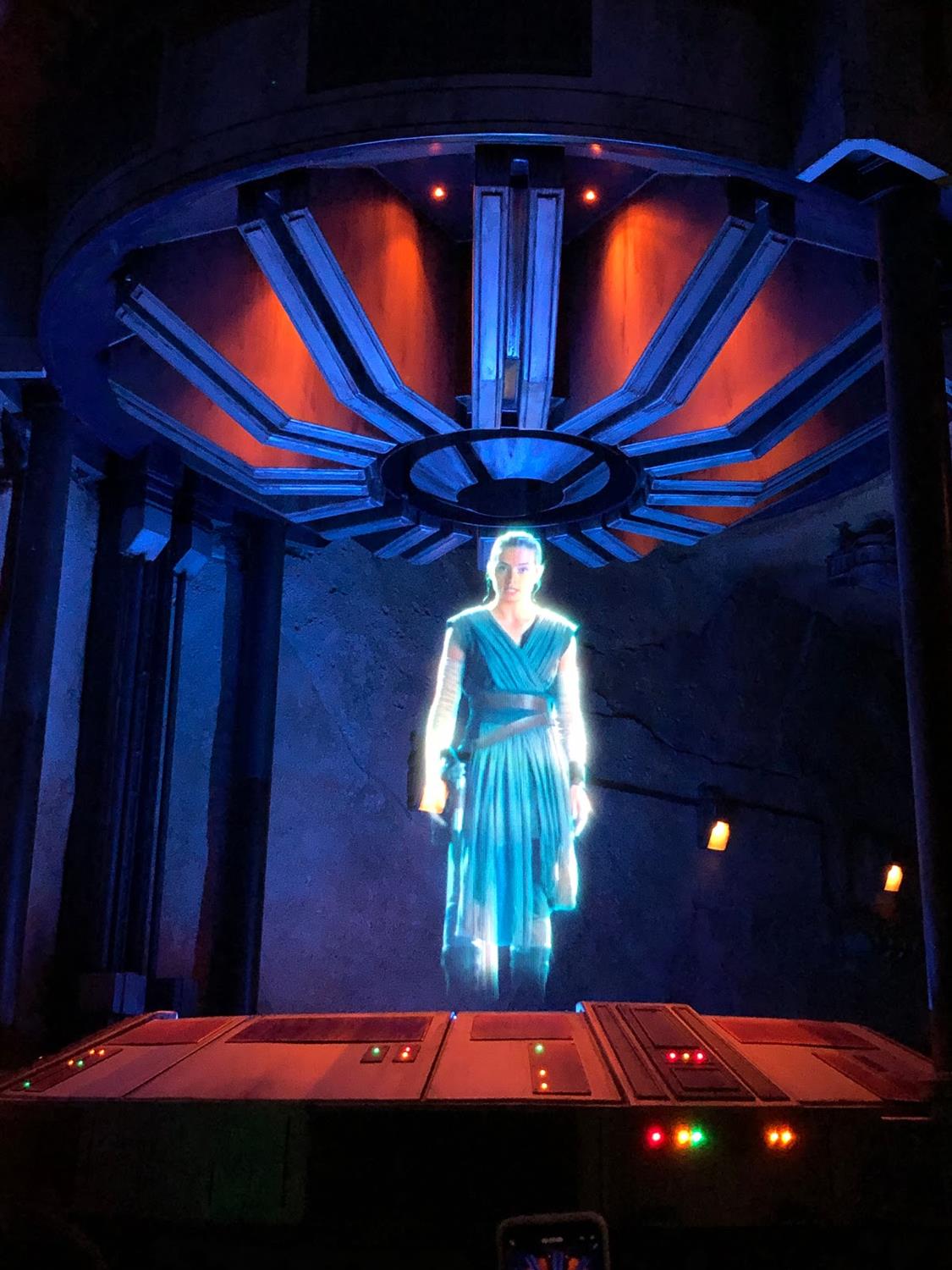 Star Wars: Rise of the Resistance is built of several pre-shows of steadily increasing immersion and intrigue, from a walk-through queue that sends you through ancient Batuuan ruins transformed into a makeshift Resistance base, to a holographic message from Rey (played by Daisy Ridley, reprising her role from the recently completed Star Wars sequel trilogy– much like a couple of her costars), to a flight-simulator shuttle journey that rather convincingly transports you from the outskirts of Black Spire Outpost to a First Order star destroyer orbiting the planet, where you’re immediately taken into custody and thrown into a seemingly inescapable jail cell. This multi-step process may seem like overkill just to get you to the main event, but it’s all in service of selling the illusion, and it works extremely well as a whole.

Where the attraction goes from there is a whirlwind of action and excitement, and it took me several times through to fully grasp how each moment flows into the next, and how deftly the Imagineers combined a variety of state-of-the-art visual effects with old-school theme-park trickery to bring the “feel” of Star Wars to life using honest-to-goodness physical sets, numerous lifelike animatronic figures, and a smattering of projections. The best thing about Star Wars: Rise of the Resistance is that there is no one best thing– it is instead a fully realized whole comprised of countless awe-inspiring parts. 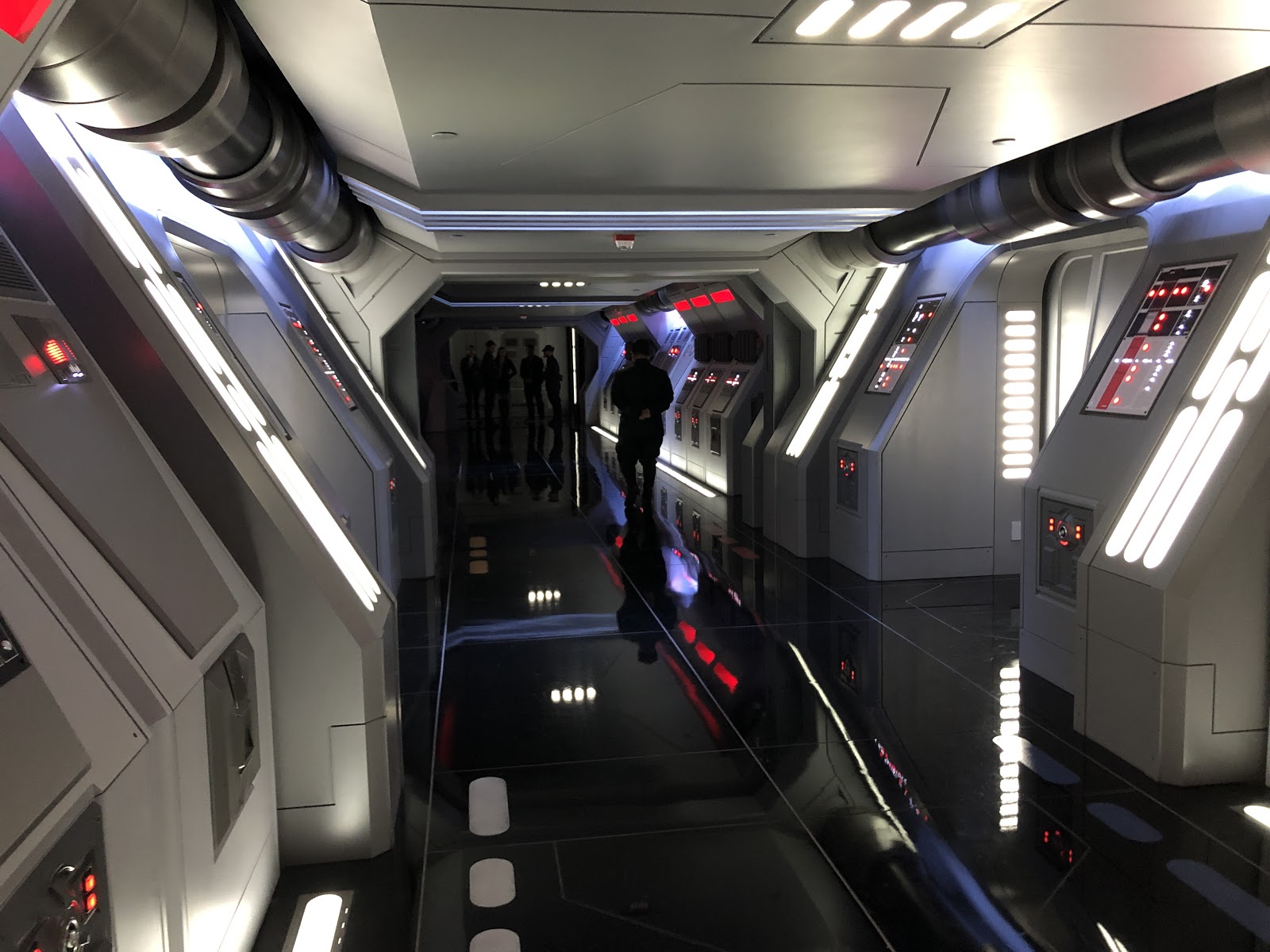 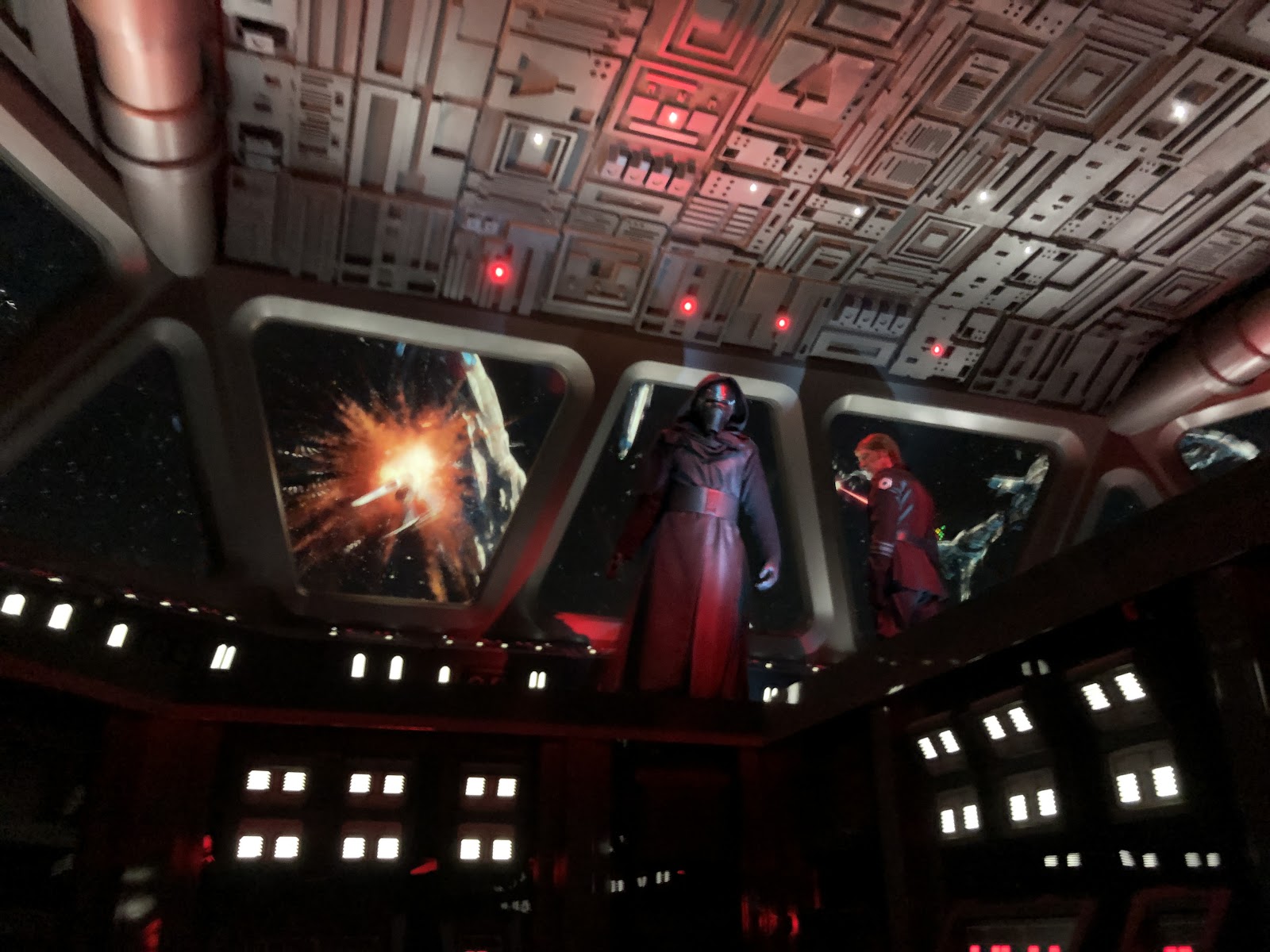 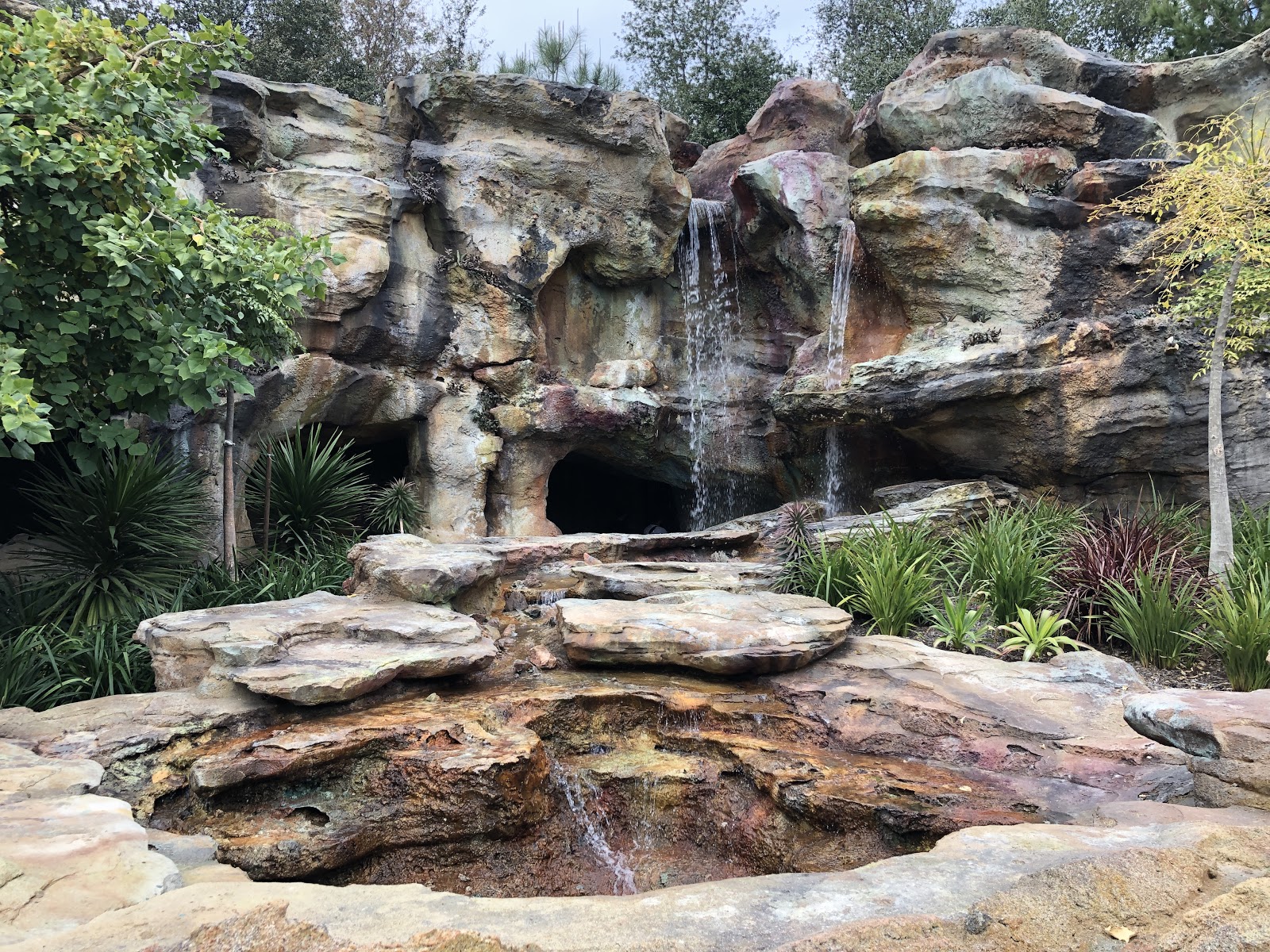 Of course, while visiting Batuu to join the Resistance, don’t forget to take a walk through Black Spire Outpost and pick up some of the many different kinds of food and merchandise available for sale within the city. Today also marked the beginning of some new items being available, including the Toydaria Swirl, Galma Garlic Puffed Cheese Chips, and Black Spire Hot Chocolate. Yum!

Star Wars: Rise of the Resistance is now open at both Disneyland Resort in Anaheim, California and Walt Disney World in Orlando, Florida. For more information be sure to visit the official Star Wars: Galaxy’s Edge website.