The latest episode of Into the Dark is titled “My Valentine,” and it is the second installment in the series to (at least loosely) focus on Valentine’s Day. It follows an aspiring musician who is dealing with a haunted past, including an ex boyfriend who stole her look and music to create a new big popstar.

Into the Dark has been all over the place in terms of the type of horror stories it tells and the style in which it tells them. So whenever you start the latest installment, you really have no idea what to expect. With that being said, the first 30 minutes or so of “My Valentine” might have you questioning exactly what you’re watching.

It doesn’t take long for the episode to introduce you to some completely ridiculous, over-the-top characters, including a side character who has an eye patch that is never explained and doesn’t have anything to do with the story or the character himself. Why an eye patch? Was it the actor’s choice? We’ll never know.

And it only gets crazier when we’re introduced to story’s antagonist: Royal (Benedict Samuel). I know, right? Already crazy, his name is Royal. The eccentric and almost cartoonish character fills the first 30 minutes with confusion and dozens of “who talks like that?” moments. And he never really slows down. On top of that, there is a whole lot of very strange editing that makes it feel like you’re watching half of this episode through an Instagram filter. That never really goes away either.

So if the characters don’t change and the story stays on the same path, what happens at that 30-minute mark that changed it for me, you ask? Well that’s just about where it all clicks that this whole thing is just going to be ridiculous and you just roll with it.

The villain, while constantly threatening never really feels like all that much of a threat. As opposed to a calculated killer like we’ve seen in previous episodes like “School Spirit,” this guy kind of just stumbles from one victim to the next and things just seem to always break his way. His reactions to killing and his dialogue in between killings are so crazy that you just can’t help but laugh.

“My Valentine” does provide a very likeable and believable protagonist in Valentine (Britt Baron). Aside from her habit of sporadically passing out so that we can get a flashback to her time with Royal, she’s a straight-forward and relatable character. 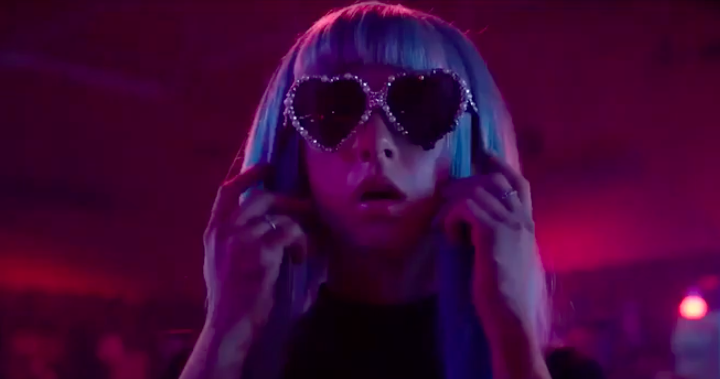 One warning I find myself providing with Into the Dark more frequently now is for gore. “My Valentine” has plenty of it, with shots that tend to linger just a little too long. If you’re not into gory horror, be prepared to look away from the screen a few times.

Overall, “My Valentine” may not be what I expected when I started it, but it’s still pretty entertaining. It never gets quite as crazy or fun as December’s “A Nasty Piece of Work,” which became a straight up comedy by the end, but it walks that line, keeping one foot firmly on the slasher horror side.

“My Valentine” will debut on Hulu on Friday, February 7. Be sure to check out our reviews of previous episodes and check back each month to see just what Into the Dark has in store next.