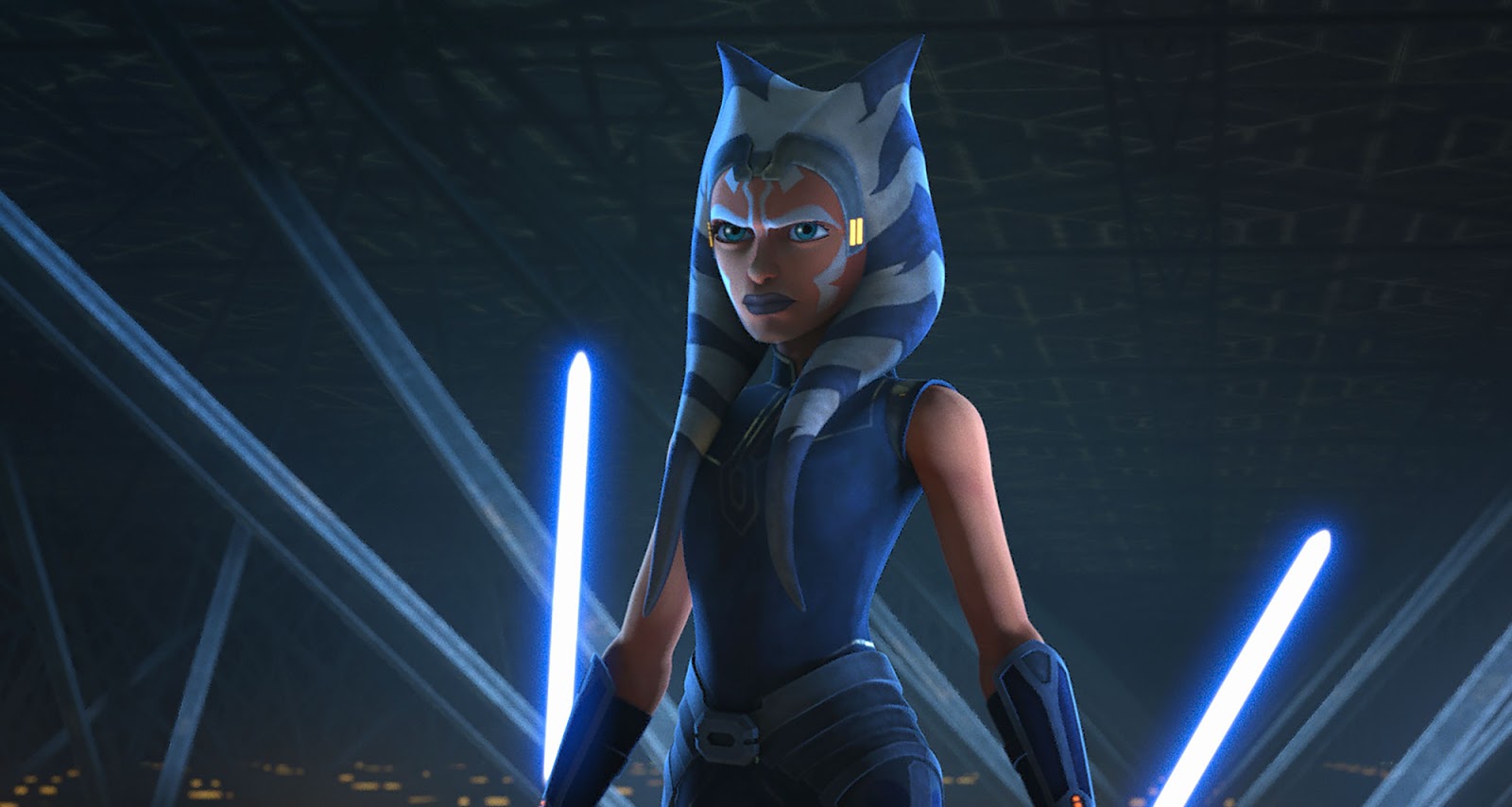 Hello and welcome to the final installment of Laughing Place’s weekly recap of Lucasfilm Animation’s Star Wars: The Clone Wars animated series. This week’s concluding episode of the show’s seventh season, entitled “Victory and Death,” begins with an ominous chanting noise over its logo. Aboard the Venator-class Star Destroyer, the inhibitor-chip-controlled clone troopers are still burning through the door of the ship’s medical bay, where Ahsoka Tano (voiced by Ashley Eckstein) and Captain Rex (Dee Bradley Baker) are wondering how they’re going to get out of there.

Ahsoka tells Rex to set her blasters to stun and Force-pushes the door out right as the troopers finish their work. She orders the R7 droid to connect to the wall’s Scomp link and find an escape route. With the hostile clones unconscious and escape pods already having been destroyed, Ahsoka says she wants to use a shuttle to leave the ship, and Rex is shocked to learn that she let Darth Maul out of his chamber. Meanwhile, Maul (Sam Witwer) is walking menacingly through the ship’s hallways, listening to the comlink he took off a dead trooper. He Force-chokes some more soldiers who get in his way and enters the Hyperdrive control room, sending more troopers to their deaths along the way.

In a pretty cool move, Maul uses a trooper’s helmet to deflect another’s blaster shots, then throws it at him to knock him into the abyss below. He then uses the Force to crush the ship’s Hyperdrive generators, while it still happens to be in Hyperspace– it drops out in a cloud of dust and debris. “I don’t like the sound of that,” Rex says as they hear all this happening from within the ship. Ahsoka orders her droid friends to prepare their escape shuttle and find out what happened outside. It turns out they’re caught in a nearby moon’s gravitational field, so Ahsoka orders R7 to open the main hangar doors, revealing the moon’s surface, too close for comfort. The ship begins crashing into the atmosphere as R7 releases the doors to the shuttle, though there are dozens upon dozens of clone troopers blocking the path. “If they try to leave, they’ll have to go through us,” one of them declares.

Ahsoka says she doesn’t want to hurt any of the clones (despite unleashing Maul on them in the previous episode) but Rex counters by insisting that they’re willing to die to eliminate them. “You’re a good soldier, Rex,” Ahsoka responds. “So is every one of those men down there. They may be willing to die, but I am not the one who is going to kill them.” Rex asks if she wants to surrender, but she rejects that idea as well. “I have an idea. Don’t worry; it’s a good one. I think.” They take the three Astromech droids and leave for the hangar. Down below, Rex pretends to be holding Ahsoka at blaster-point. Clone trooper Jesse (also Baker) tells Rex to execute the Jedi, but Rex says Ahsoka is no longer a Jedi and thus does not fall under Order 66. Jesse reminds Rex they had received a special order from Darth Sidious to eliminate Ahsoka and any clones that disobey him.

Jesse accuses Rex of treason and says he’ll be demoted and executed for helping Ahsoka stall. Suddenly, the droids drop the hangar floor out from underneath most of the troopers, who fall stories below. Then Maul enters the hangar and heads for the shuttle, throwing cargo containers at Ahsoka when she tries to stop him. Ahsoka falls down the newly revealed shaft but grabs a cable to stop her descent, and the troopers below and above start shooting at her and the droids. Maul boards the shuttle and starts to take off but Ahsoka stops it with the Force. R7 is destroyed in the crossfire as Rex defends Ahsoka, and she gives in, releasing the shuttle. Maul gets away, jumping immediately into Hyperspace. Rex and Ahsoka find themselves surrounded by troopers, so she cuts a hole in the floor with her lightsabers, finding more soldiers and another ship below.

The remaining Astromechs are destroyed by clone troopers as the Star Destroyer is pulled ever closer to the moon, and Ahsoka blocks blaster bolts as Rex boards the Y-Wing. The capital ship enters the moon’s atmosphere and its gravity shifts. Ahsoka jumps to the Y-Wing but misses, and Rex scrambles to regain control of the vessel, returning to pick up Ahsoka in mid-air. A few death-defying acrobatics later, after leaping from debris to debris as it falls toward the surface, Ahsoka grabs the Y-Wing’s canopy and gets aboard. They escape as the Star Destroyer crashes into the moon.

Later, amid the wreckage on the surface, Rex picks through the pieces, reassembling droids as Ahsoka buries troopers, placing their helmets on memorial pikes, including Jesse’s. Morose in the aftermath of the battle and the Clone Wars in general, she drops one of her lightsaber hilts into the dirt and leaves it there. We then dissolve to years in the future, with the moon now covered in snow. Imperial probe droids and snowtroopers mill about as Darth Vader finds the crashed Venator ship and Ahsoka’s lightsaber. A lone convor flies through the sky above him as he ignites the blade, and we see his reflection in one of the troopers helmets when he walks away.

The complete series of Star Wars: The Clone Wars is now available to stream exclusively on Disney+.