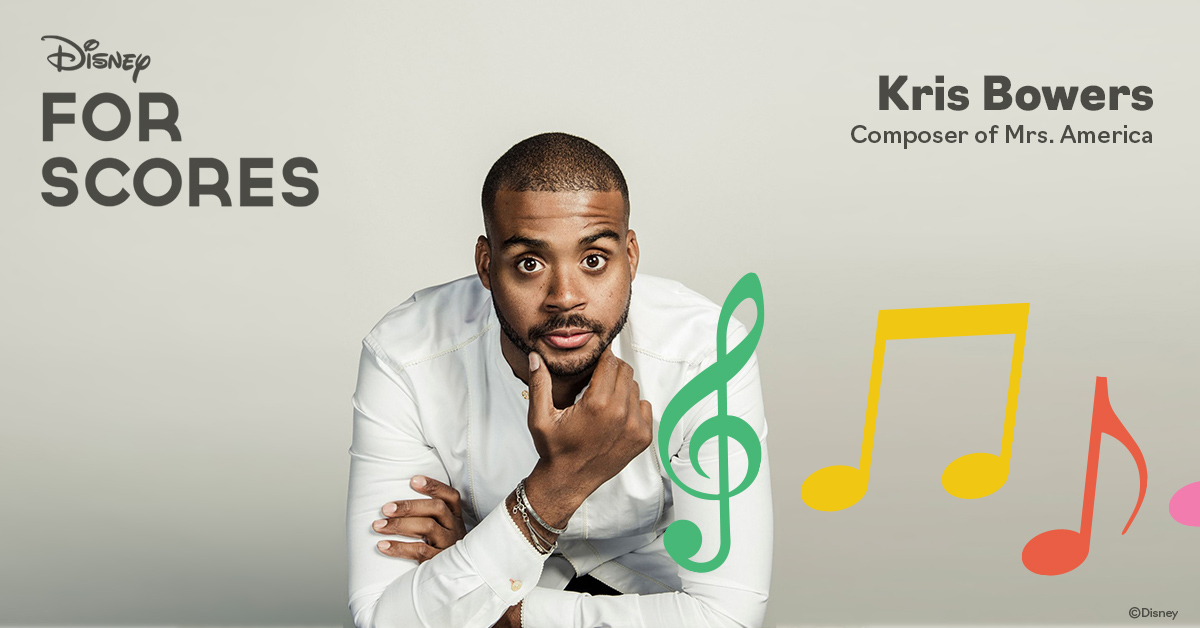 The eleventh episode of Disney’s For Scores podcast hosted by Jon Burlinggame featured composer Kris Bowers, who recently scored the FX on Hulu series Mrs. America. During the episode, listeners discover how he got involved with the project and how the global pandemic impacted his ability to complete it. But first, as always, there’s a little background on the guest.

Kris Bowers’ parents introduced him to piano lessons at a young age. Movies and TV were a big part of his life, with his father writing for shows like What’s Happening and Nickelodeon’s Kenan & Kel. By the time he was twelve, he had a deep love of jazz and film music and had already set his sights on a career composing for film. In particular, he mentions John Williams’ scores from Indiana Jones and Jurassic Park as being a big influence.

The Netflix show Dear White People was one of his first big breaks, which combined his love of jazz and other styles into a unique fusion that caught the attention of the filmmakers behind the Oscar-winning Green Book. That project required him to get involved before it began filming, including teaching actor Mahershala Ali how to play piano.

For Mrs. America, Kris was attracted to a relatable story about equal rights. “I’ve always just been inspired by projects that deal with social justice issues and the other thing that made me fall in love with it was how they treated Phyllis Schlafley because I felt like, from the first episode really, you’re almost rooting for Phyllis Schlafly. You want her to win or succeed until the very end when you realize, oh, she’s actually kind of the antagonist of this whole thing. I think storytelling like that is brilliant to get to understand the people that we don’t like or don’t agree with. And to remember that they are humans going through some of the same life experiences that we’re going through and that just adds a little bit of depth and complexity to them as characters. I knew from reading the script that it was going to be kind of a joy to write music for the project and treat Phyllis specifically with a very human sensibility and to be very careful about how we’re painting her emotionally to make sure we’re not being too biased, which I think is such a tough job. But when it’s done right, it really makes for impactful TV.”

Kris approached writing themes based more on sides of the ERA debate rather than for specific characters. The Stop the ERA theme was inspired by “Battle Hymn of the Republic” while the feminist side was based on “Move on Over,” a protest version of “Battle Hymn of the Republic.” He also added more synthetic instruments for the feminist themes to represent the start of that style in the era.

“We were just about half-way through on episode seven when we had to shut down,” the composer shared about the California lockdown that impacted the scoring of Mrs. America. “I first called Peter Rotter, my contractor, and he helped me get together a list of musicians that had recording equipment at home and even musicians that didn’t and maybe wanted to get some for this time… I think we had maybe twenty-five or so musicians during the scoring sessions previously. So now that we’re doing this smaller iteration, we would have maybe like five string players but then have some of them, like the violins, record three layers but then record once in mutes, once a little further away, so then it would give a little bit of variation in each of the layers that they’re giving us.” Doing things this way also impacted the length of the recording sessions, with musicians recording multiple versions of their part to fill out the sound. “Instead of us being able to finish in a 3 hour session, now this takes a couple of days to be able to get through all this music. And we would also send it to all the musicians and give them a few days to turn it around. That way they can record at their leisure whenever they have time and then get it back to us.”

In the podcast, Kris Bowers also talks about getting to work with Music Supervisor Mary Ramos, a frequent collaborator on Quinten Tarantino’s films, and working with Cate Blanchett on a scene where she plays piano with her son. You can listen to the full episode on your favorite podcast app. FX’s Mrs. America is now streaming exclusively on Hulu.