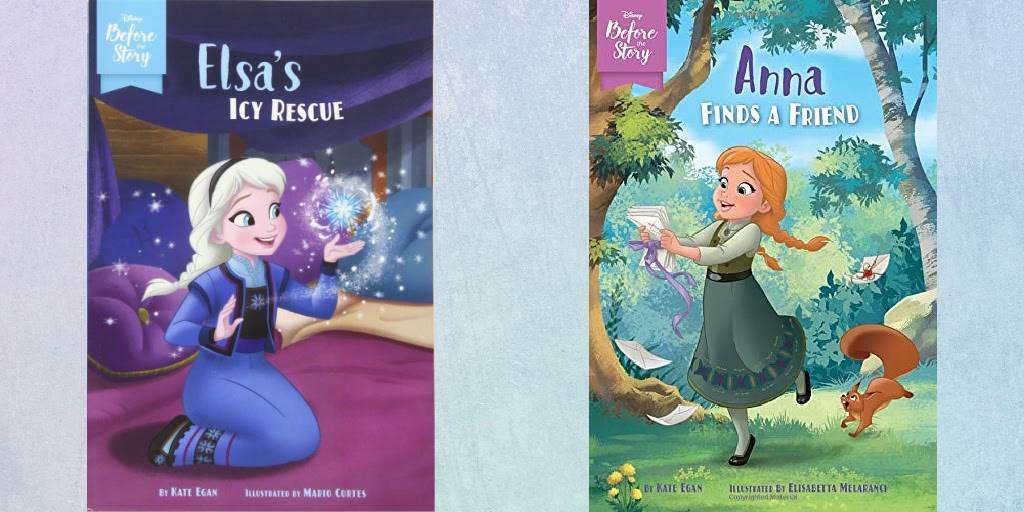 Kids can get to know their favorite Disney characters better and develop a love of reading through a new book series called Disney Before the Story. Debuting earlier this year with Mulan’s Secret Plan, this review will cover the second and third book of the series, both themed to the princesses of Arendelle from Frozen. Elsa’s Icy Rescue and Anna Finds a Friend allows kids to get to know these heroines when they were their same age through two heartwarming stories.

Both stories take place on different ends of the accident that caused a streak of Anna’s hair to turn white. In Elsa’s Icy Rescue, Anna and Elsa love to have fun with Elsa’s icy powers while on a summer holiday to the family’s Royal Sommerhus (a real location at EPCOT where Anna and Elsa meet and greet during a normal operating schedule). But this summer will be different for Elsa, who has to spend private lessons with her mother preparing to take the throne in the future. When she shares with Anna a legend of a magical snow hare, Anna runs off in search of the lucky bunny and Elsa has to save her sister.

While Elsa’s Icy Rescue has a good mix of both Anna and Elsa, Anna Finds a Friend takes place when Anna is a little older and after Elsa has shut herself away in her room. When King Agnar and Queen Iduna leave for a two-week trip, Anna searches high and low for a friend, making up a girl named Astrid and sending letters to her. But to her surprise and delight, the made-up Astrid starts writing back!

Both stories are tales of friendship and family, each a chapter book perfect for kids in early elementary school to read to themselves. Illustrations help expand the world of Disney’s Frozen, attributing names to some of the palace’s servants and introducing new animal characters not featured in the film. And since Elsa’s Icy Rescue features part of the Norway Pavilion at EPCOT, that book in particular would be a great choice for kids on their way to the most magical place on earth or who fondly remember taking a visit there.

Disney’s Before the Story series has since added two additional books to the collection, with books about Pocahontas and Cinderella now available. This series is a great way for kids to expand their love of these Disney films while also fostering a love of reading.