The first arc of the second volume of Star Wars: Doctor Aphra from Marvel Comics came to an end today with Part 5 of “Fortune and Fate,” entitled “Power Play.” Wrapping up this archaeological adventure where we left off at the end of last issue, Chelli Aphra and her companions are brought to the planet Cantonica and the casino city of Canto Bight, where the fiendish aristocrat Ronen Tagge has made his base of operations.

This issue opens with a surprise revelation about the Rings of Vaale– something that overturns what both Aphra’s crew and this comic’s readers had assumed about the sought-after ancient artifacts (SPOILER ALERT)– the Tagge family has been in possession of the Ring of Immortality for generations. We also learn more about that fabled dynasty and how exactly their power and influence is at play in the current state of the galaxy, set between the events of The Empire Strikes Back and Return of the Jedi in the larger Star Wars saga. 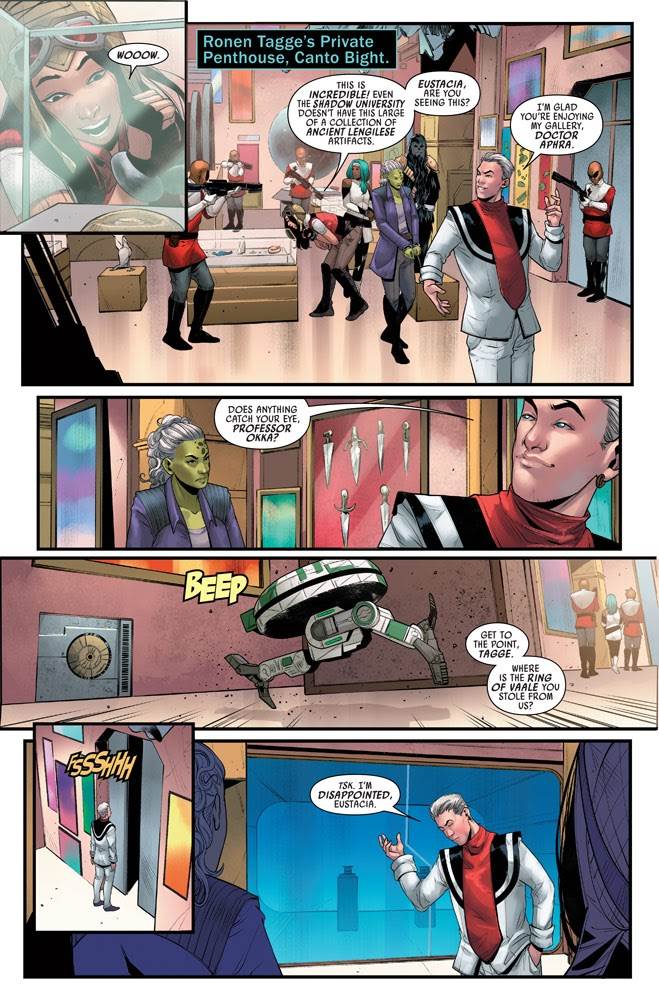 Aphra has intentionally allowed herself (and the rag-tag team composed of fearsome Wookiee bounty hunter Black Krrsantan, scheming grad student Detta Yao, and esteemed archaeology professor Eustacia Okka) to be capture, and of course she’s got some tricks up her sleeve as Tagge leads the group into his inner sanctum decked with countless priceless relics. In accordance with his sick tradition, Ronen plans to destroy the prized rings, just so he can say he was the last person to possess these treasures before they ceased to exist. Fortunately for our morally ambiguous protagonists, Aphra and company came prepared with handy droid TA-418 and some useful technical know-how. I don’t want to give away what happens after that, but the remainder of the issue proves to be an explosive conclusion to this arc, though its ending only opens the door for further conflict between Aphra and the Tagges. We also check back in on the double-crossing assassin Just Lucky and get to see how each character handles themselves in a crisis. Plus, as always there are a few good throwaway lines and quips from Aphra, not to mention what I perceived to be a not-so-subtle dig at Star Wars: The Rise of Skywalker co-writer / director J.J. Abrams in some of Ronen Tagge’s dialogue (see the top-right panel on the sample page below). It’s possible that current Doctor Aphra writer Alyssa Wong did not intend it in that way, but considering the lukewarm reception that movie received last December, I wouldn’t rule it out entirely. Regardless, “Power Play” gives us just enough of a satisfying culmination to this run of Aphra’s adventures, while also appropriately setting the stage for further tales to come.