DuckTales turns back the clock this week, as the Disney XD reboot animated series rewinds time a number of decades to give us compelling backstories for both the criminal organization F.O.W.L. and the adventuring team of Scrooge McDuck (voiced by David Tennant), young Della Duck (Paget Brewster), and her very emo brother Donald (prolific voice actress Cristina “Vee” Valenzuela of Pokémon Masters, taking over from the late Russi Taylor).

“The First Adventure!” starts in the 1960s at spy agency S.H.U.S.H.’s London headquarters, where Agent 22 AKA Bentina Beakley (Toks Olagundoye) has taken the villainous Black Heron (April Winchell) into custody. But little does she know that the seemingly innocuous consultant Bradford Buzzard (Marc Evan Jackson) is plotting his own brand of organized world domination. Bradford and Black Heron team up, forming F.O.W.L. and setting events into motion that will reverberate through the current era of DuckTales storytelling. 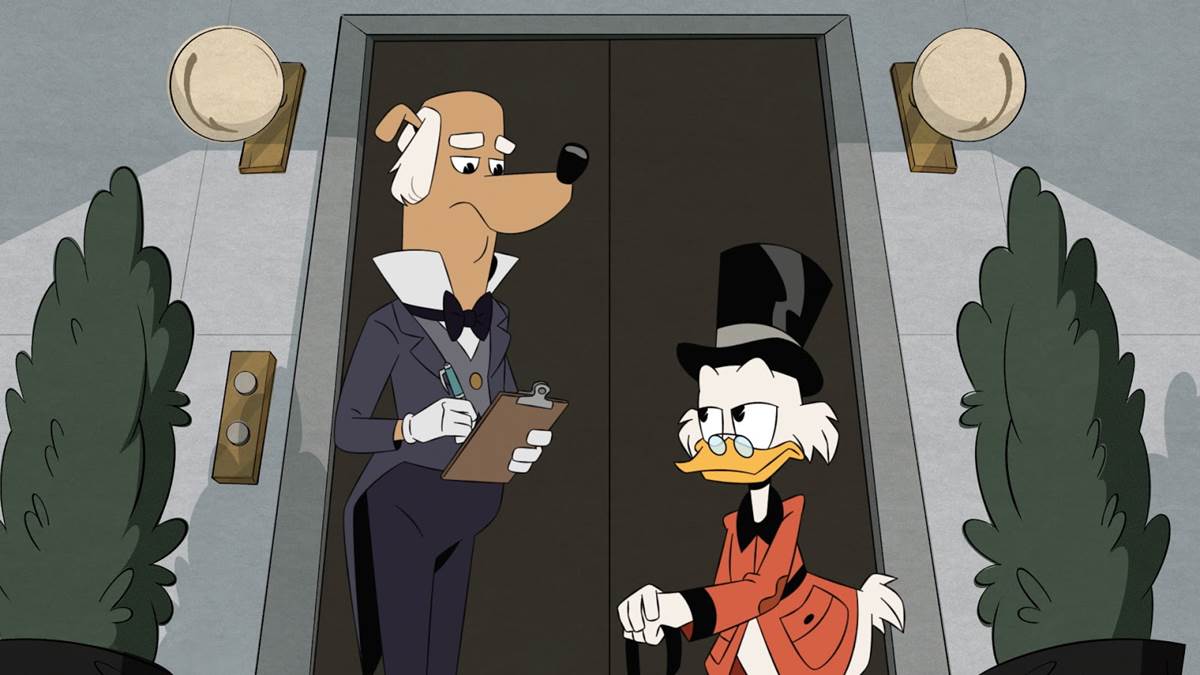 We fast forward an unspecified amount of time (it looks like it’s probably the early 1990s) to the day Uncle Scrooge comes into custody of Donald and Della, who are insistent on joining him on one of his famous adventures, though Scrooge claims he now only spends his days managing his business interests. A call comes in from Beakley, who informs Scrooge that S.H.U.S.H. has located the long sought-after Captain Yellow Beak’s pirate ship, on which rests the fabled Papyrus of Binding. Scrooge reluctantly allows his niece and nephew to accompany him on this journey, though he insists Donald throw away his irritating guitar before takeoff. 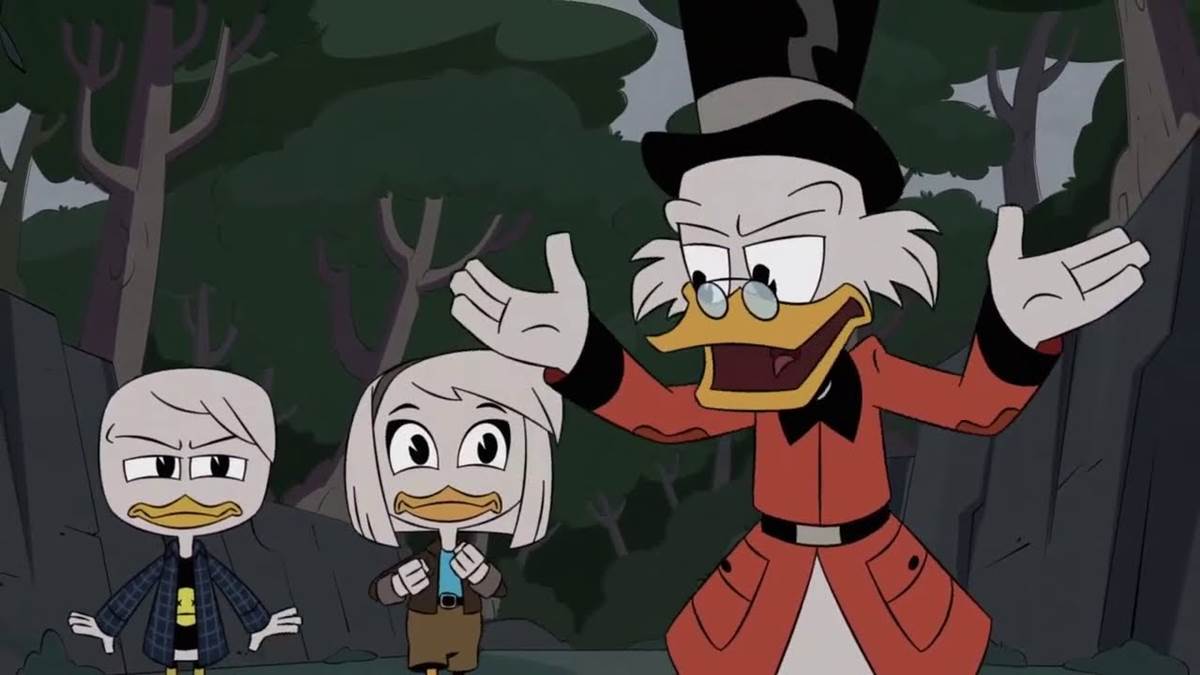 On the plane ride over, the pilots are revealed to be none other than Black Heron and Bradford Buzzard themselves, who parachute to safety, leaving Scrooge and his two relatives to deal with the descending vessel, Indiana Jones-style. One harrowing-but-intact landing later, McDuck and the Ducks begin their race to the peak of a phantom island in the Bermuda Trapezoid, hoping to claim the magical Papyrus before F.O.W.L. can get its hands on it. After reaching the extremely Goonies-esque Captain Yellow Beak, a battle of brawn and wits breaks out between the enemies, as both Scrooge and his fearsome foes attempt to utilize the enchanted artifact to each other’s detriment. Naturally our heroes come out on top with Scrooge banishing the Papyrus to be re-discovered later by his heirs, but not before Bradford can erase the Duck family’s memory of his involvement in the incident. I really enjoyed getting to see this flashback to the early days of Uncle Scrooge’s adventures with Donald and Della, and I liked how their relationship parallels the one he has with nephews Huey, Dewey, and Louie and their friend Webby in the “present.” I also appreciated the pure treasure-seeking elements of this episode, with the exceedingly eerie Yellow Beak’s reanimated skeleton being one of the highlights of an overall terrifically fun outing. And it’s great to see F.O.W.L.’s history fleshed out a bit, especially in the midst of a season that focuses on the criminal enterprise as its ultimate Big Bad. Plus, as usual there are more than a few Easter Egg references to the original 1980s DuckTales cartoon, the Carl Barks comic books that inspired it, and even the classic NES video game. What more could you want? 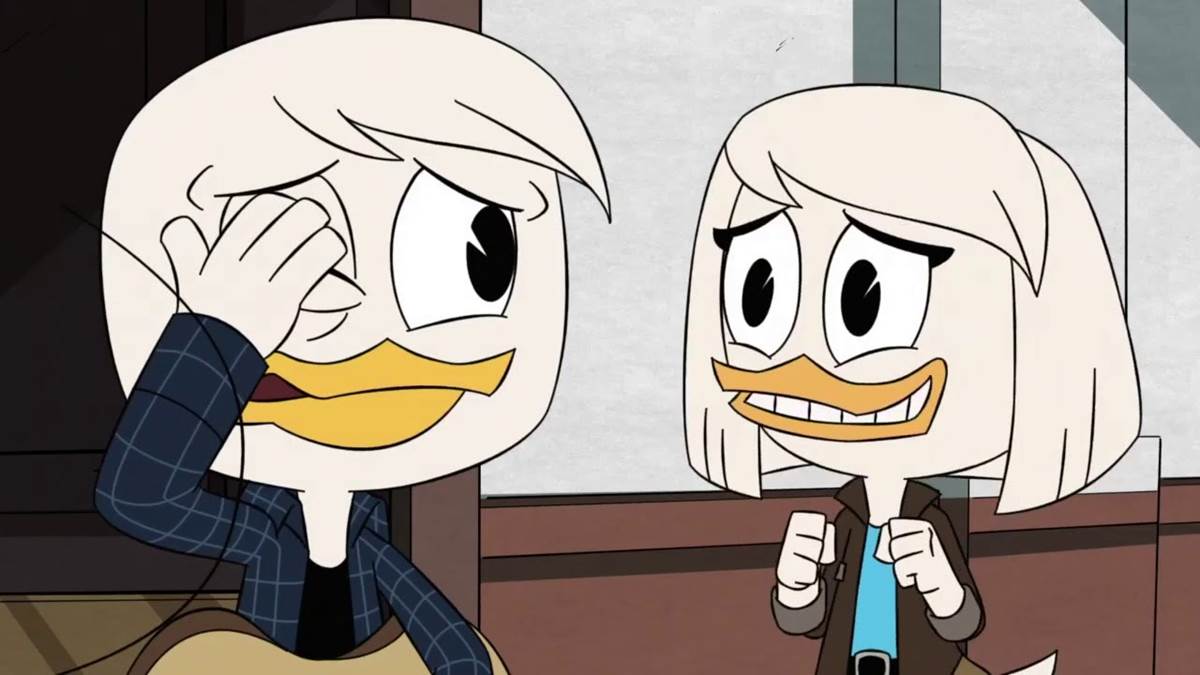 Next week: “The Fight for Castle McDuck!”