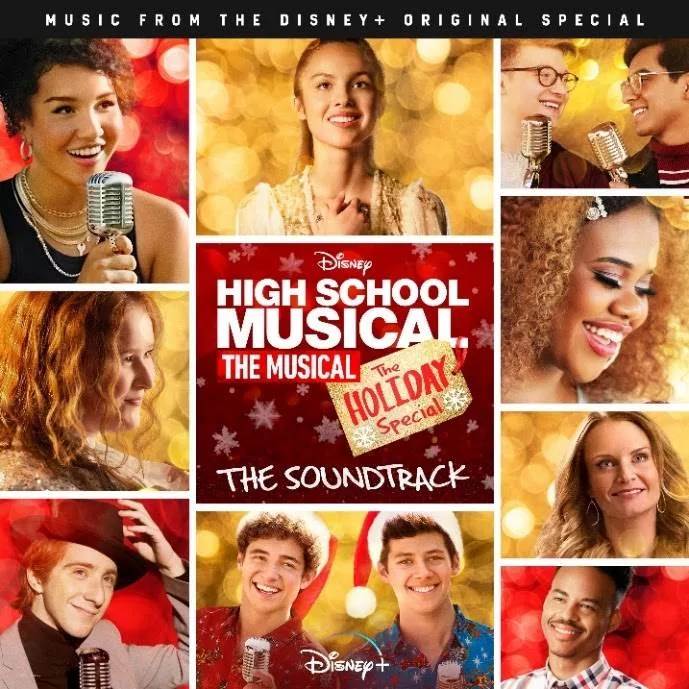 Decorators say that music is one of the quickest and easiest ways to change the feeling of a space, which is why holiday music is more important this season than ever before. Disney+ is ready to lift our spirits on December 11th with High School Musical: The Musical: The Holiday Special, but to tide us over, the soundtrack is now streaming on all major music providers. It includes two new songs along with eleven well-known classics performed by the cast of the popular series.

The album itself is a bit of an anomaly, although I imagine it will play better with the visuals from the special. Part of the appeal of the music of High School Musical: The Musical: The Series is that it’s diverse, going from an acoustic ballad to an overproduced pop dance song to a show tune. The holiday album oddly favors dance pop renderings of some heartfelt Christmas songs that at times become a hot mess. And while there are some cast members with incredible vocals worthy of their own record deal, that’s not always the case. As a result, some tracks fall on their face and are skippable, in spite of the songs themselves being excellent.

Starting with the two original songs, the first is “The Perfect Gift,” which theoretically is like a sequel to Mariah Carey’s “All I Want For Christmas Is You.” Written and performed by Joshua Bassett, it’s a smooth, heartfelt ballad that prove his talent not only as a singer, but as a songwriter. It’s my top highlight of the entire album.

The second original song, “Something in the Air,” is also from the upcoming second season of the series, but feels less like a Christmas song and more like a modification to lyrics of a non-holiday song. It’s like when Bette Midler recorded a Christmas version of “From a Distance” with a few lyrical changes. It still works, but it’s a tonal shift from the rest of the truly holiday songs on the album. I imagine I’ll like it better in its series version.

Of the covers, the highlight for me is “Believe” by Dara Reneé. The song was originally written for the Warner Brothers film The Polar Express and recorded by Josh Groban. You have to have a lot of courage to tackle a song made famous by a world renowned singer and Dara proves herself worthy. The arrangements of the song also make it updated for 2020 while not overdoing it.

Another star performance is Olivia Rodrigo’s cover of Joni Mitchell’s “River.” She reaffirms her place as the series’ top balladier. Proof of the female cast’s vocal talents is found on the acapella “That’s Christmas to Me,” a Pentatonix cover. Joshua Bassett and Matt Cornett do justice to their cover of “Little Saint Nick” by The Beach Boys and they join Dara Reneé for a cover of Darlene Love’s “Christmas (Baby Please Come Home),” another highlight.

The rest of the album, about half of the songs, are either over produced to the point of being unlistenable, are instantly forgettable, or don’t hold a candle to the many other versions available elsewhere. The biggest shame of the album comes on Sofia Wylie’s opening track, “This Christmas (Hang All the Mistletoe),” which adds a frenzied EDM bridge that destroys the whole piece.

Ultimately, the soundtrack to High School Musical: The Musical: The Holiday Special is a mixed bag. There is one excellent new Christmas song and a handful of covers that do justice to their songs. As for the rest of it, I can guarantee you won’t remember these versions exist this time next year.