The Real-Life Hero Who Inspired a Disney Film: Behind the Scenes of “Safety”

If you don’t already know the name Ray-Ray McElrathbey, that will soon change in Disney’s Safety, premiering December 11th on Disney+. The true-life story of a college football player who’s drive to succeed not only changed his own life, but that of his younger brother, caught the attention of producer Mark Ciardi.

“When this story happened in 2006, that’s when I got a hold of the rights,” Mark Ciardi revealed during a recent press junket. “I watched, like many people, the national pieces on ESPN, ABC, The Oprah Winfrey Show, and I was really moved by it. When you can feel something by watching a 2 or 3-minute clip and then you start to peel back the layers of what the story is, I was just incredibly moved. And you have to go off your gut and your instinct. We set it up at another studio back in 2006 and the screenplay, I thought it was pretty good and we came close to making it and it just didn’t happen. And when Disney+ announced their platform a few years ago, we brought it over and thought it could be a great movie for them, they agreed and that was it.”

“I was fortunate enough to benefit from Mark’s hard work over all these years,” Director Reginald Hudlin shared when asked about how he got involved. “I get the script and 20 pages in, I’m standing up, I’m pacing around and my wife was like ‘What’s wrong?” I said ‘This is good.’ Another 40 pages more I’m like, ‘I think I’m going to work.’ And I just really related to Ray’s story. I’m from a small town in the midwest, all Black, economically deprived where it takes a lot of energy to get escape velocity, to create opportunity for yourself. And Ray had it tougher than most, he’s a guy who made a way out of no way in a situation where failure was not an option. I think that’s a very important message for the time’s we’re living in.”

The role of Ray went to Jay Reeves, who got to work with the real-life inspiration behind his character. “The first question I asked him was what high school he went to because my brother grew up in Atlanta and he was like ‘Hey, you playing this guy from Atlanta?,’” Jay explained about a helpful tip from his sibling. “He said ‘Tell me what high school he went to, I'll tell you what he’s like.’ So I asked Ray and Ray said ‘I went to Mays,’ and my brother’s like ‘Ooh,’ he was taken aback. He was like ‘Oh, be careful.’ So I already knew going into it that Ray had a difficult time at that high school.”

At the start of the film, Ray is already at Clemson University, but the real Ray-Ray McElrathbey participated in the junket and shared a little more about his road to getting a full scholarship. “I grew up in the city of Atlanta,” the inspiration behind Safety revealed. “Born in Chicago, Illinois, but raised in the city of Atlanta. I stayed with various coaches so I kind of bounced around a little bit when I was younger. Clemson came about late my senior year, I actually attended a football camp at Clemson that my trainer and some other coaches sponsored for me and I was able to receive a scholarship while I was there at the camp. Coach Bowden offered me a scholarship and Billy Napier was actually a graduate assistant at the time, now he’s office coordinator so it was actually that long ago… It was one of the better decisions that I’ve made in my life.”

With a real-life hero to serve as inspiration, the filmmakers found it hard to narrow the story down on such a specific moment in Ray’s life.“Ray’s had a momentous life and so many incredible things have happened to him, before the events of the movie, after the events of the movie,” Director Regiinald Hudlin said. “As Ray will tell you, ‘I’m not a movie, I’m a miniseries.’ But even with what we shot, we ended up having to cut wonderful, incredible scenes out… We have to get to the point of the message of the movie.”

“The best thing to do with a movie is try to contract the story and have it in a smaller amount of time,” Producer Mark Ciardi added about trying to fit real events into a feature-length film. “With our movie, it was maybe a 2 to 3-month period and there’s so much in Ray’s story even that we couldn’t get to. But in structuring a movie, you have to be really judicious in what you want to focus on. God, our first cut was over 3 hours… We couldn’t even fit what we have in the movie into the movie because we had two movies.”

Director Reginald Hudlin also approached the project with a goal to make it stand out and be different from an already crowded genre. One of the ways he does this is with rotating cameras during a montage of Ray and his friend Daniel’s busy college athlete lives. “I really have to give praise to Shane Hurlbut, he’s my cinematographer,” Reginald explained. “He was a real partner in crime in terms of, like, ‘Okay, we can shoot things the conventional way, but why would we do that? Let’s really convey the mindset of these guys, you know, waking up at ungodly hours and getting up and getting going.’ So we set up this rig that went around, but the trickiest part is we had to move both of the walls to the side. So one wall was out and the camera starts and then we had to slide that wall back in and then move the wall on the other side so the camera can be there on the go around. This was where a film crew really has to work as a single piece. The camera operators, the riggers who are moving walls and the actors who have to ignore all that craziness that’s going on and just act like ‘Yeah, I’m waking up in the morning, I’m tired.’ And it was a case where it was perfect. A shot like that could take all day, we knocked it out in no time so it was a real credit to the entire cast and crew working in sync.” 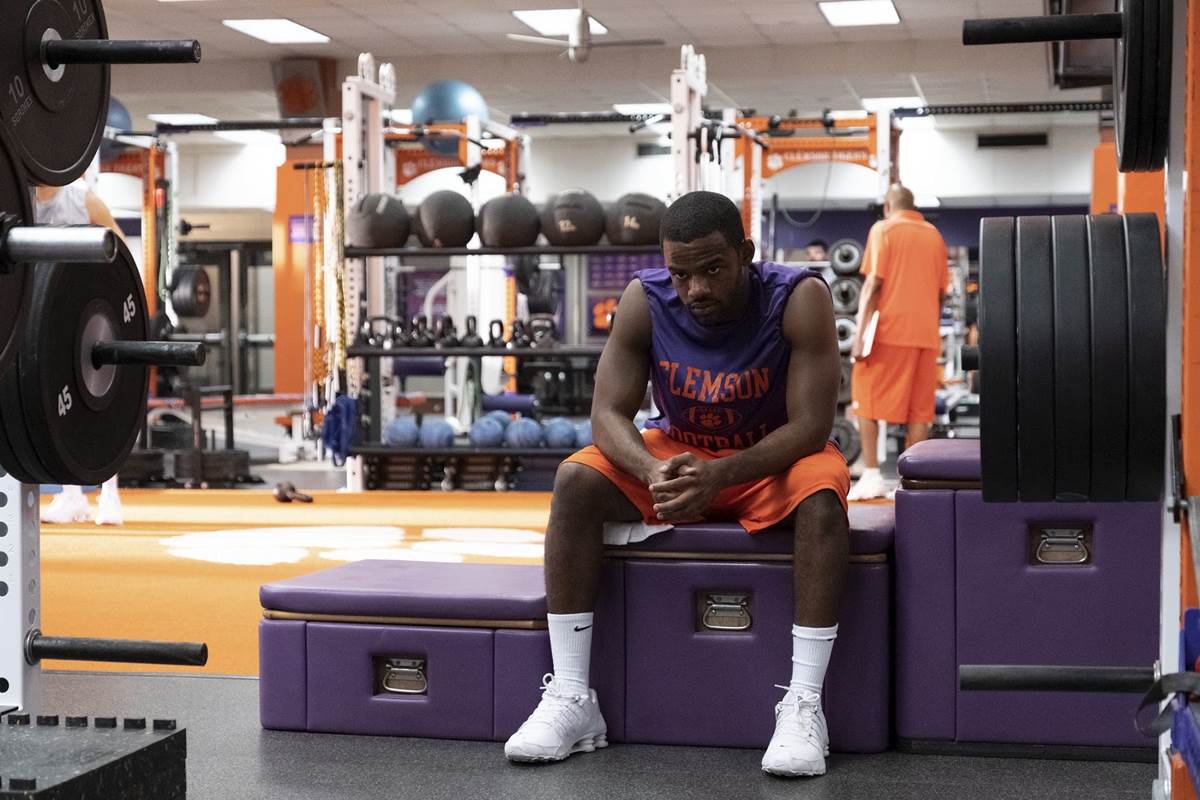 You can see the final results of the cast, crew and creative team’s hard work when Safety premieres on Friday, December 11th, on Disney+.