From the people that brought you Disney Channel Halloween House Party comes Disney Channel Holiday House Party, a 30-minute comedy sketch special that premiered December 11th on Disney Channel. In this recap, we’ll break down each of the sketches. The show was hosted by Miranda May from BUNK’D who had a few “Technical challengers” throughout the night. Radio Disney fans should also be on the lookout for a hidden ARDIE (RDMA Award) in each sketch. How many did you find? 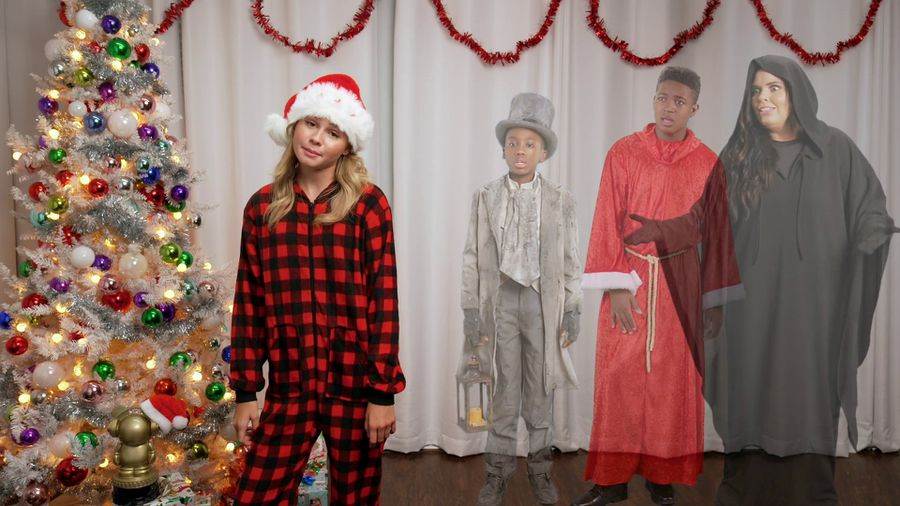 Skylar (Ruby Rose Turner) is a bratty influencer who starts her holiday video by playing a game of “Smash or Trash” with holiday themes like mistletoe when the ghosts from A Christmas Carol interrupt her. She tries to ignore the Ghost of Christmas Past (Ramon Reed), Ghost of Christmas Present (Issac Ryan Brown) and Ghost of Christmas Future (Miranda May) as she does terrible things like opening her sister’s present and trashing her phone, which is last year’s model.

Have you ever wanted to know what it’s like to grab the Disney Channel wand and record one of those bumpers? Well in this sketch, we not only learned that it’s a lot of fun, but also dangerous. There’s signs all over warning the cast now to inhale the magic dust and even a 45-minute safety DVD they have to watch before they can work with it. Still, Trevor Tordjman from Zombies managed to do it and he’s suffering the ramifications, sneezing and farting blue magic dust.

In this spoof or High School Musical, Ruby Rose Turner and Ramon Reed play preschool kids, their faces enlarged to make them look small. They sing pop songs about needing to have a change of clothes in case they go potty and about biting another student on the leg who stole the toy they were playing with.

Kylee Cantrall is video chatting with her friend Kaylin Hayman when she gets a notification that her favorite internet dance tutorial influencer, Becxxie Bexxerz (Miranda May) is doing a live video. She shares the screen with Kaylin who’s never heard of her before and realizes not only is the dancer giving them instructions like a mom, but Becxxie Bexxerz is actually Kylee’s mom in disguise!

Scarlett Estevez is lying in bed when she gets a notification from her video doorbell. We Santa fall off her roof and try a variety of ways to get back up. Poor Santa!

Kylee Cantrall’s mom (Suzi Barrett) asked her to thaw the chicken when she left earlier, but now she’s home and Kylee forgot! An announcer lets her know about a new app called “Oops, I Forgot.” When Kylee pushes it, a government agent from an extra-terrestrial task force apprehends the mom and says she’s the only one who can save our planet, putting her through training while Kylee thaws the chicken. When it’s ready, they tell the mom they made a mistake and send her home.

Tobie Windham is Mr. Merry, a preschool TV show character who lives with his puppet animals. Christmas is coming up and he has clues that are supposed to tell him what his friend wants. Clue 1 is ice, clue 2 is roller skates, and clue 3 is a picture of a girl ice skating. When he can’t figure it out, the puppets talk about how unintelligent he is and make plans to escape.

Raphael Alejandro is in the kitchen complaining about how boring all the different types of milk his mom buys are. That’s when the announcer tells him to try Milk-O-Rator, a divide that can turn anything into milk. First he tries chocolate cake, which is really yummy, but the milks get more and more disgusting as the sketch goes on. After pizza and hot dog milk, Raphael is ready to stop, but the menacing announcer makes him try one more: garbage milk. You can get your own Milk-O-Rator for the low, low price of $499.99.

As a finale, all of the stars of the special got on a video call to say goodnight, with Santa still stuck outside on the doorbell camera.