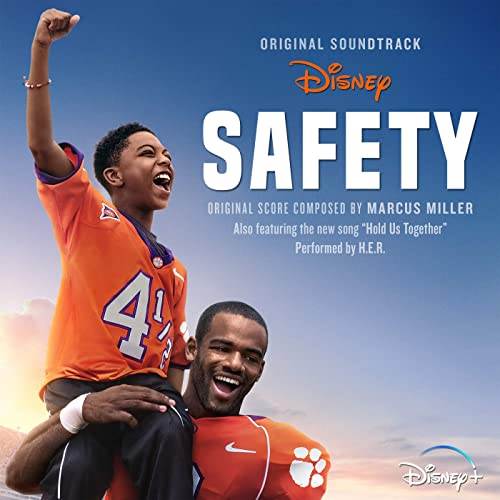 Based on the true story of Ray McElrathbey and his brother Fahmarr, Disney’s Safety is inspiring Disney+ subscribers. They can now take the uplifting music from the film anywhere with the Safety Original Soundtrack, now streaming from major music providers like Apple Music, Pandora, and Amazon.

The soundtrack begins with the end credit song from H.E.R. called “Hold Us Together,” an acoustic ballad with a big score accompanying the Grammy-winning singer. It’s a beautiful, powerful and moving song. Due to streaming rights, you might have to search for it separately on streaming platforms. The themes of the song perfectly match the relationship in the film between Ray and his brother Fahmarr.

The rest of the soundtrack consists of 21 score tracks from composer Marcus Miller, himself a Grammy-winner who has worked with the likes of Luther Vandross, Aretha Franklin and Miles Davis. This score was one of the highlights of the film for me with a very inspiring main melody. Marcus Miller has a lot of fun with the college setting by incorporating drumline instruments into the score. My one regret is that the album doesn’t include the drumline version of the Walt Disney Pictures intro used in the film.

The Safety Original Soundtrack arranged tracks in order to create an optimal listening experience rather than giving them to you in the order they appear in the film. For example, the finale, “One Family For Another/Four and a Half,” is track 6 instead of 22. At 10-minutes in length, it’s also the best choice for someone looking to buy just one track digitally that incorporates most of the film’s themes. It starts with the slowest and saddest of them, one that often underscores tension in Ray’s life, progressing into the optimistic theme that follows his achievements and kicks off the film. It picks up and builds in the latter half to something that feels truly epic. It’s the kind of track that can lift you out of a funk and make you feel ready to tackle the day’s challenges.

In some cases, score tracks feel more like songs, as is the case with the groovy track “Gonna Be Alright (I Got You Brother)m” which features singers expressing the track’s title over an R&B beat. “Don’t Make a Sound” is a modern jazz standout that differs from much of the score, which follows Ray as he sneaks his brother around the dorm. Miller also has fun with themes that are otherwise side on the score, like on “We Need Help,” where one of the score’s saddest themes becomes an uptempo jazz track. And the main theme becomes almost rock and roll on “Family, Right?”

Marcus Miller’s score for Safety is one of the best of the year and the track order on the Safety Original Soundtrack takes listeners on a fantastic auditory journey. Coupled with the new H.E.R. song “Hold Us Together,” this entire soundtrack is a winner.