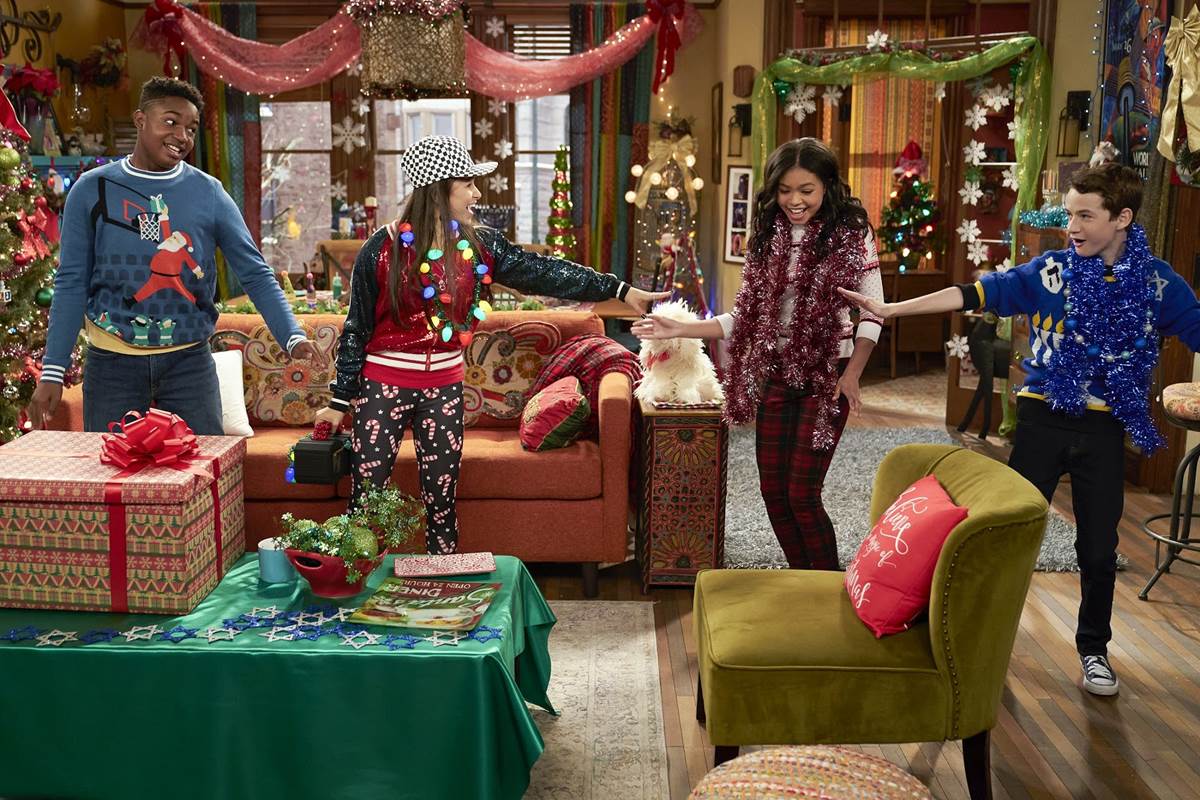 Ho ho yo! Disney Channel premiered a double-length holiday episode of Raven’s Home on December 18th, 2020 called “Mad About Yuletide.” This episode also brings the characters a little bit into the real 2020 with talk of the pandemic and Raven turning her fashion business into a trendy face mask warehouse. Here’s a recap of all the fun in both parts of “Mad About Yuletide.”

Booker’s phone alerts him that the “Cray Begins” when he’s sitting on the couch with Nia and Tess. Booker is usually overly enthusiastic about Christmas, but this year he’s in the doldrums. After a montage of all the other holidays from 2020 that were disappointing, he tells them he’s not excited about Christmas this year.

At work, Chelsea is wrapping up a group therapy session while Raven fields a call for a big mask order, saying they won’t be able to fulfill it due to the holiday. But when their ex-husbands Garret and Devon video call from their dream cabin in Lake Geneva, WI, Raven accepts the order for the extra money to help pay for the vacation.

Back at the apartment, Nia tells Tess that she’s going to help her boyfriend Ramon find her the perfect gift. When he shows up with a bracelet he braided out of the shoe laces he wore on their first date, Tess tells him to go get her a locket instead and she throws it away. In an effort to cheer up Booker, Levi comes out dressed as Santa Claus with a black garbage bag full of the Christmas presents. His plan doesn’t work, but when they notice it’s snowing outside, Tess suggests a rooftop snowball fight and he perks up as they head to the roof.

While the kids are on the roof, Raven and Chelsea return to the apartment to grab a spare sewing machine because Raven burned out the one at the office working on the face masks. When they see the trash bag full of presents, they decide to take it with them to ship it all to the cabin so they have more room in the car. On their way out the door, they also take the trash from the kitchen that had the bracelet Ramon made for Tess.

The gang returns to the apartment with Levi’s face shield caked in snow from the snowball fight when they notice the bag of presents is gone. They realize that their moms must have come home and mistaken it for trash. During the commotion, Ramon returns and shows Tess a sparkly locket he bought, which she approves. He leaves to go have his mom wrap it when Tess tells Nia that Ramon always makes her very thoughtful, personal gifts and she can’t wait to see what he got her for Christmas. Realizing she made a mistake, when the kids go to the dumpster to look for the presents, Nia is also secretly looking for the shoelace bracelet he made.

Returning stinky and covered with trash, the kids are upset about the present but Nia is happy that she recovered Ramon’s bracelet. Booker decides to take the heat for putting the presents in the bag and he calls Raven, who tells him that they had the presents shipped to the cabin. This makes him happy and he gets his cray back just as the snow becomes heavier and Chicago closes their streets. End of part one.

The second part opens with Raven and Chelsea waking up from a nap in the office where Raven had a nightmare that they were snowed in. They realize it wasn’t a dream when both Raven and Chelsea butt dial their kids, who talk about what they’re doing.

In the apartment, the kids are decorating presents when they decide to re-enact Levi’s favorite holiday memory. It starts with him wanting a brother or sister when his parents get a boat instead. While out on the water, they get pulled over by a police boat and his dad was arrested. Stopping the show, Booker tells him he was supposed to pick a happy memory and he tells him he did because eight days later, he and his mom moved in with Auntie Ray and he got a brother and sister, meaning Booker and Nia. Levi celebrates Hanukkah, a holiday that is celebrated over eight nights, meaning this story started on the first night and ended on the last.

With the rest of the crew feeling depressed, Booker tries to cheer everybody up by bringing out a giant mystery present that he says will go to the person with the most Christmas spirit. Tess returns with a light-up necklace and music player and they start a dance party to this year’s Disney Channel holiday bop “Put the Happy in the Holidays.”

Raven and Chelsea get desperate and grab the arms of mannequins in their office, using them to dig their way out where they find tunnels through the snow. While lost in the tunnels, they keep passing what looks like the same silver living statue. Going crazy, Chelsea picks up an abandoned Coffee cup for a woman named Donna and Raven grabs it from her. Reading the label, she says “No fat, no sugar, no whip. You know, Donna needs to live a little.” After tipping the statue and getting pointed in the right direction, they still find themselves coming back to the same underground crossroads.

A call from Raven and Chelsea puts Booker back in low spirits when they tell the kids they’re lost. Just then, their dads show up, having taken a helicopter from the cabin, and when Booker tells them Raven and Chelsea are lost, his dad says “That’s so Raven.”

Down in the tunnels, Raven fakes a vision about them having a perfect Christmas to cheer up Chelsea. Just then, they see a red light through the snow and dig themselves out. In the apartment, nobody believes Booker when he says everything’s going to be fine and that they don’t need to go rescue Raven and Chelsea. When Levi opens the door, their moms are standing there and Chelsea exclaims “Hannukaluyah!”

With the whole family reunited enjoying hot cocoa and listening to a jazz version of “Put the Happy in the Holidays,” Nia tells Booker that he had the most Christmas spirit and should open the big box. He tells her it’s empty, but she says it feels heavy. Inside, they not only find all of their presents, but even more than they had before as jingle bells are heard outside the window.

The Baxter and Grayson families had a happy and healthy holiday season in this double-length episode and I hope you and your family do, too!