I remember being about ten years old and my mom letting me order the novelization of Joe Dante’s Gremlins 2: The New Batch from my fifth-grade Scholastic Book Club before I had actually even seen the movie. That delightful bit of nostalgia was the first thing I thought of while reading the new Star Wars: The Mandalorian – Junior Novel from Lucasfilm Publishing and Disney Books.

The Mandalorian – Junior Novel takes the entire first season of the smash hit Disney+ live-action Star Wars series and condenses it down to 200 pages of pretty straightforward prose, following bounty hunter Din Djarin and his young Force-sensitive ward the Child (before the world knew him as Grogu) on their adventures planet-hopping around the galaxy.

There isn’t a lot of what I would call “new” in The Mandalorian – Junior Novel, but as it stands it might be a terrific introduction for kids of a certain age to get into the idea of reading Star Wars books instead of limited themselves to consuming the enduring space-opera franchise via more visual media like movies or TV. For me as an adult, I enjoyed plowing through another recap of season one chapter-by-chapter, episode-by-episode as Mando and the Child visit Nevarro, Sorgan, Tatooine, and more recognizable locales right out of the series’ initial batch of eight episodes. I did learn a couple new character names and details here and there– I hadn’t yet realized that the character voiced by creator Jon Favreau was named Paz Vizsla, a descendant of his role from Star Wars: The Clone Wars— but otherwise this story trods extremely familiar territory to anyone even casually familiar with the show.

It is a little odd to present such a deliberately episodic narrative in this novelized format, especially with such a limited page count to play with: readers may find themselves experiencing whiplash as one adventure somewhat jarringly butts up against another as author Joe Schreiber (Solo: A Star Wars Story – A Junior Novel) faithfully adapts the often unrelated events of the first season in a straight sequence. I almost wonder if it would have benefitted the book to cut out some of the middle chapters and expand upon what we see in the more mythology-heavy episodes at the beginning and end of the season, as I did quite enjoy getting to experience what was going on inside some of the supporting characters’ heads from time to time. But it’s pretty rare that Schreiber even remotely deviates from what we see on screen or hear in the actors’ dialogue.

For those reasons I would most recommend The Mandalorian – Junior Novel to kids ages 8 to 12 who are either so into the show that they can’t get enough or those who maybe aren’t allowed to watch the show yet and want a more youth-targeted way to get a taste of what it’s all about. As a budding Star Wars devotee around that age, I also remember getting a big kick out of learning to spell character and planet names, and reading about Djarin’s exploits in this way may help young fans absorb and remember trivia like that. There are also eight color pages of still images from the episodes in the middle of the book to help readers associate photos with the text, so that’s a bonus as well. As novelizations go, this is a fairly uncomplicated one, but at the same time it’s nice to have a new way to live these stories again that doesn’t involve pressing play. 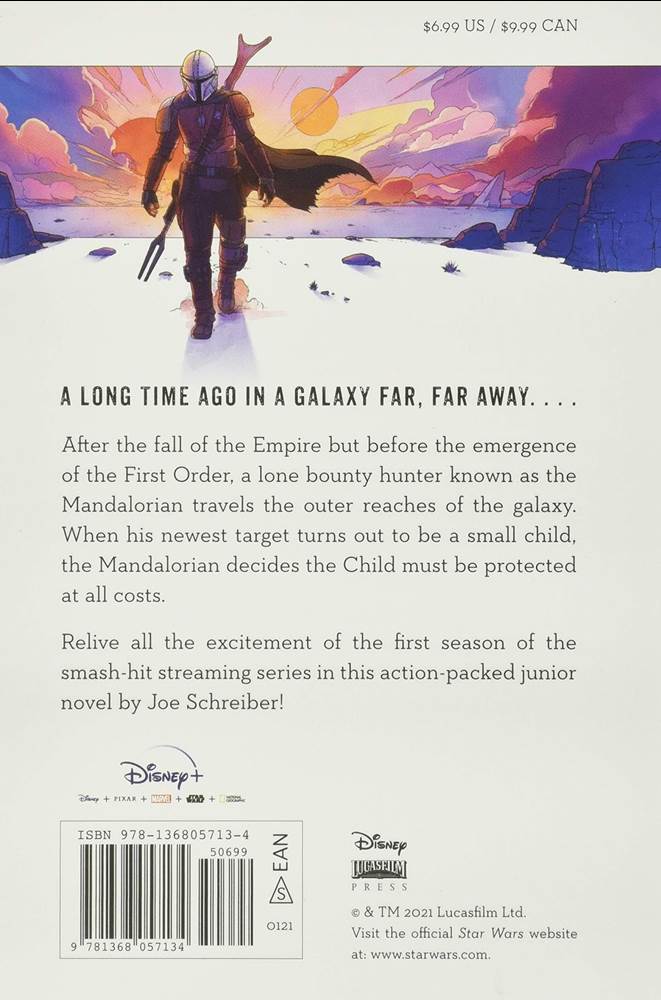 Star Wars: The Mandalorian – Junior Novel is available now wherever books are sold.