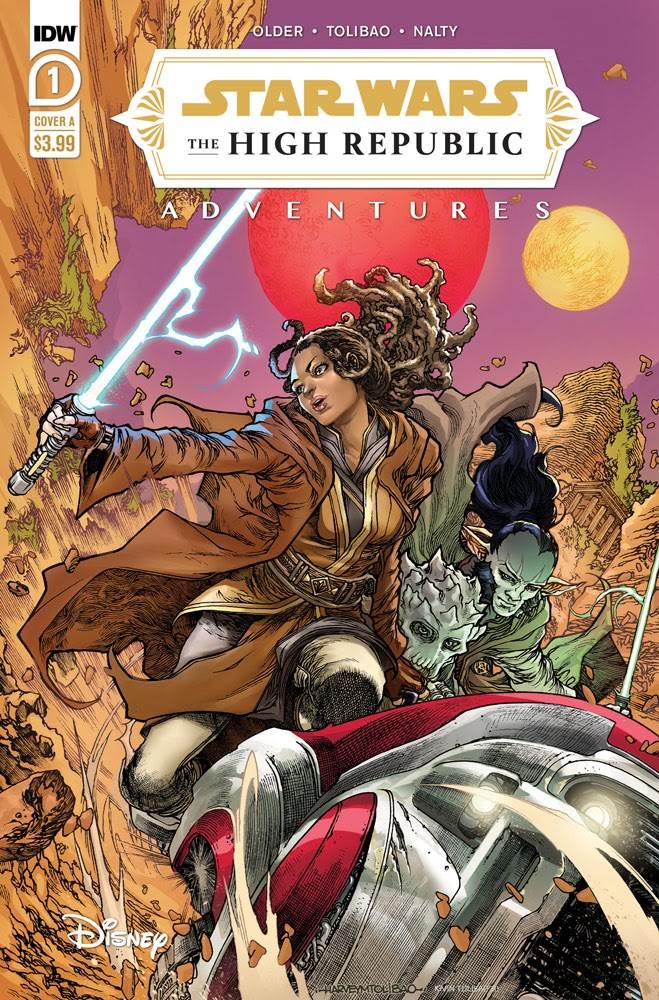 Like IDW’s other regular Lucasfilm-licensed title Star Wars Adventures, Star Wars: The High Republic Adventures is intended for a somewhat younger audience than the ongoing Marvel Star Wars comics, and with that in mind Older has chosen to focus its story on the younglings of this period: Jedi Padawans who are journeying with the now-only-700-year-old Master Yoda on an academic cruiser called the Star Hopper. Yoda and these younglings are “traveling the galaxy, learning about being Jedi” when they are suddenly forced to deal with a nearby emergency– namely some localized fallout from the Great Disaster first depicted in Charles Soule’s adult-targeted novel Star Wars: The High Republic – Light of the Jedi. 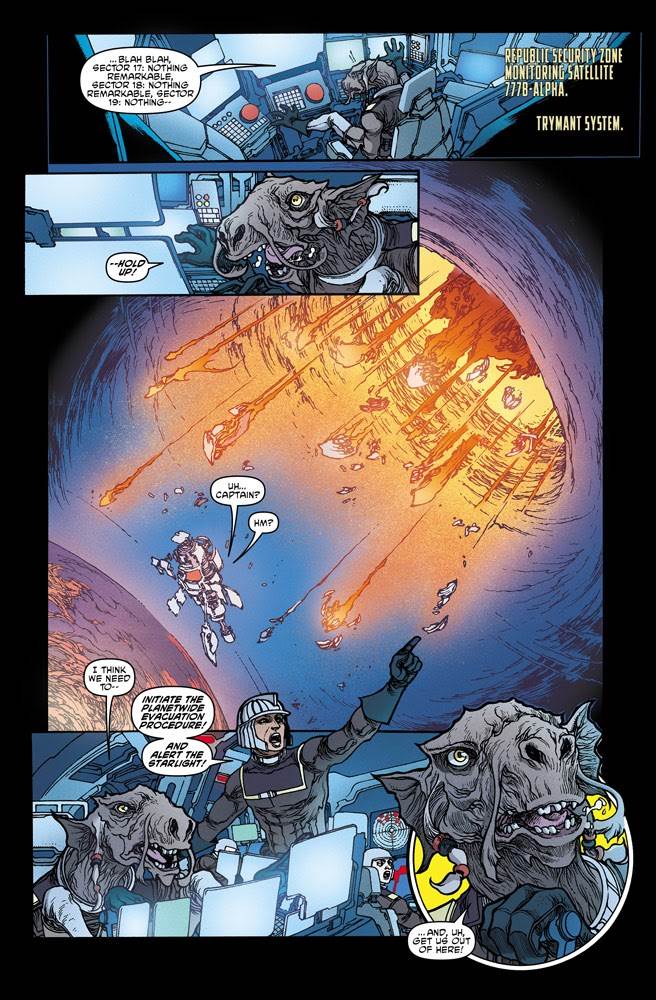 We are simultaneously introduced to two Force-sensitive youths who are hinted to have a hidden connection: Padawan Lula Talisola, who excels in her training but is hesitant about her ability to face real-world dangers, and Zeen Mrala, a resident of the planet Trymant IV, where her elders have always deterred their populace away from the Force and its powers. While Yoda and Chagrian Jedi Master Torban Buck stay in space to deal with the larger pieces of debris as they hurtle perilously toward the planet, the Padawans are sent planetside to help the locals and attempt to stage a mass evacuation before any real damage is done. There, the younglings encounter the Nihil (a militant band of marauders previously established in The High Republic continuity) and discover Zeen’s latent Force abilities as she reaches out to prevent a chunk of wreckage from crashing disastrously into Trymant’s surface. 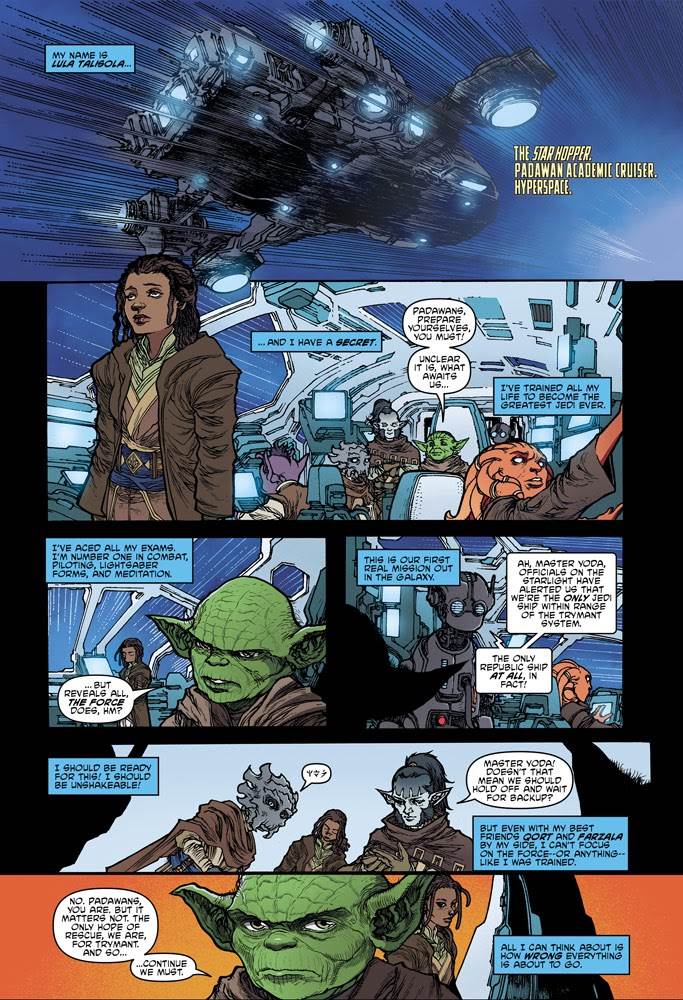 I haven’t tended to be the biggest fan of his work in the Star Wars galaxy, but Older has done a good job in this introductory installment of The High Republic Adventures of spotlighting some of the younger characters as they’re faced with unexpected hazards and must prove themselves in the line of service. I think kids will get a kick out of seeing characters their own age acting as capable Jedi Padawans under the tutelage of Yoda, and Zeen’s story in particular is sure to shed some light on how Force-users are conscripted into the Jedi Order, even when their own cultures evidently forbid it. Tolibao’s art is a little too busy for my own personal taste, but I do think it matches the action presented here. As the months go by, I expect this title will prove itself a worthy companion piece to the other High Republic comic series while carving out its own niche in the larger Lucasfilm Publishing initiative. 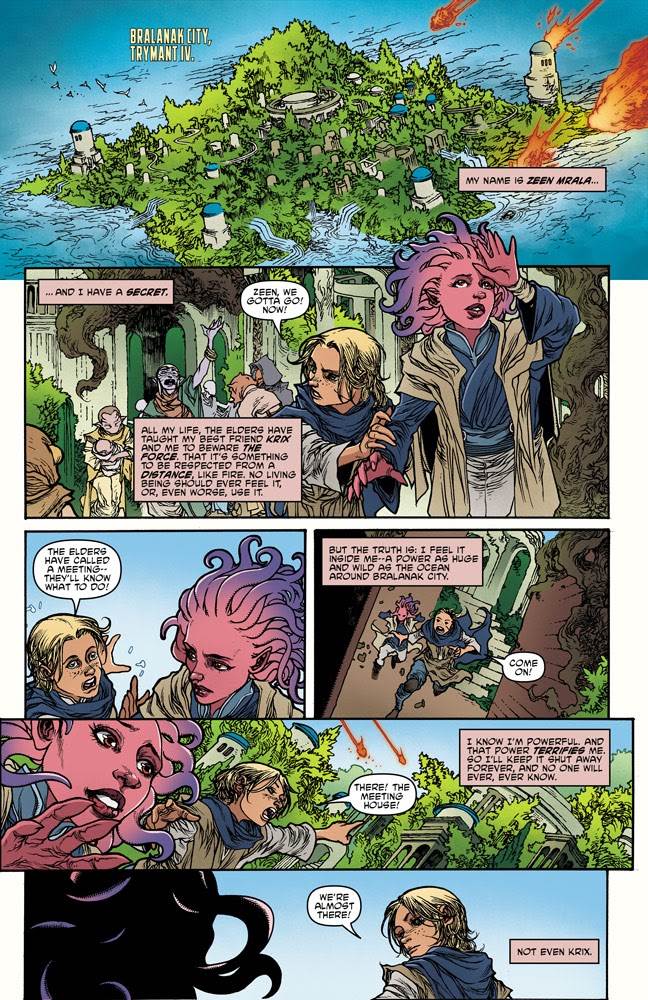