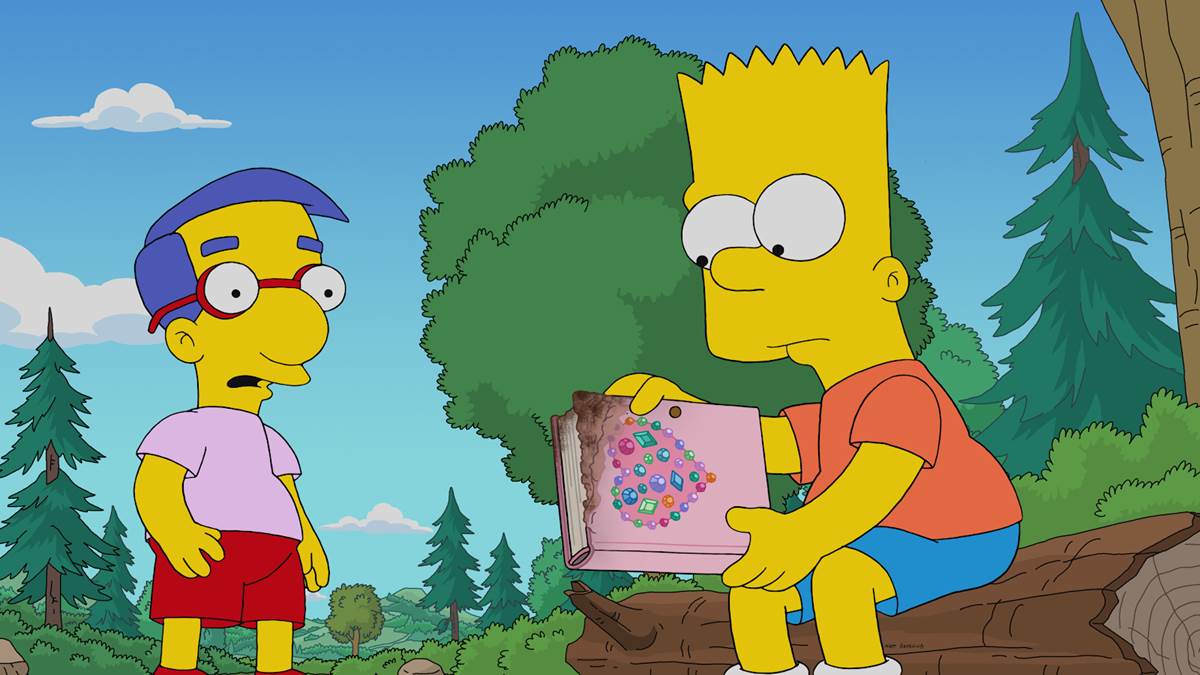 Hello and welcome to Laughing Place’s regular recap of new episodes of The Simpsons on the FOX Network. This week’s installment, entitled “Diary Queen” (a play on the fast food chain Dairy Queen) is the 12th episode of the long-running animated sitcom’s 32nd season.

Couch gag: A UFO lands on Mars, and Marge and Maggie exit in space suits. Homer, Lisa, and Bart join them, and Marge asks Homer, “Where’s your helmet?” His head flies off into space. 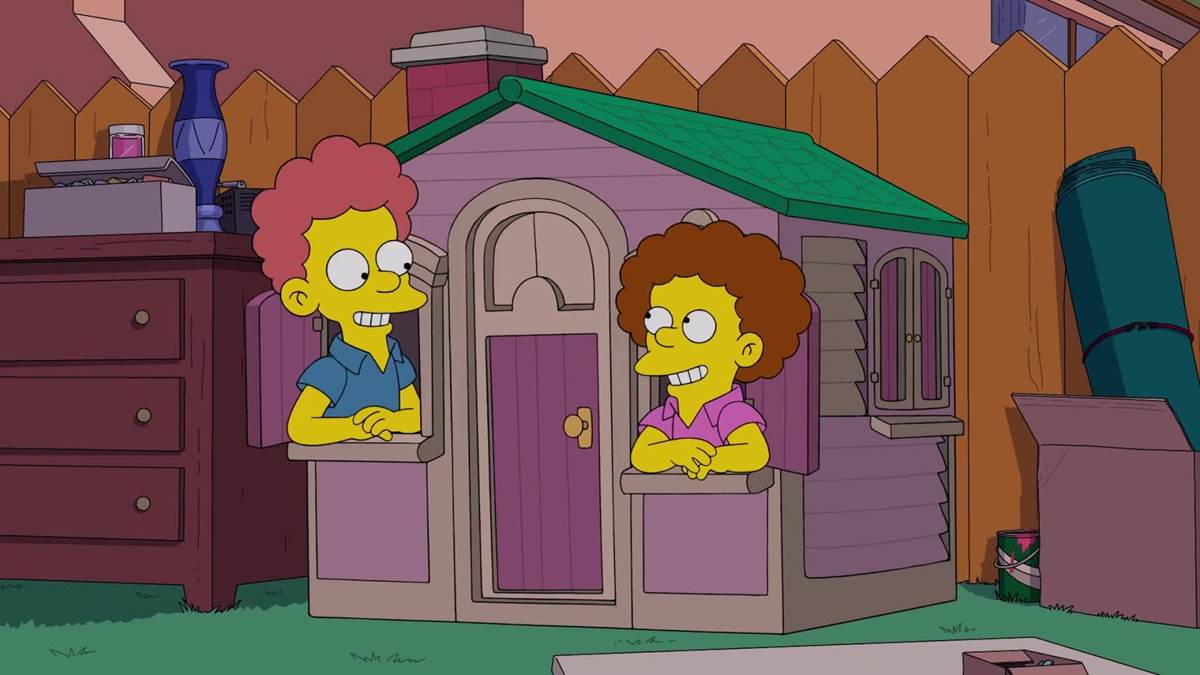 The episode begins with an elaborate musical number parodying West Side Story as Springfield celebrates Ned Flanders’s (voiced by Harry Shearer) garage sale. Marge (Julie Kavner) asks Ned if he really wants to sell precious possessions like Rod’s (Pamela Hayden) baby teeth. The bullies are smashing Ned’s collector plates (after purchasing them) while Lenny (also Shearer) and Carl (Alex Désert) make fun of his sweaters. Ned declares he’s not going to sell any more items unless he’s certain they’re going to a good home. Bart (Nancy Cartwright) and Milhouse (Hayden) offer to buy two boxes of books, while Nelson (Cartwright again) picks up a jar full of all the swear words Ned had cut out of them.

Bart and Milhouse use the old books to perform stunts to shoot on Milhouse’s phone for social media (though Milhouse holds his phone backwards and ends up only shooting video of his own face) and they discover that one of them is Edna Krabappel’s (the late Marcia Wallace) diary. Bart feels guilty about having this book after remembering that Flanders had once married his now-deceased teacher. Bart and Milhouse consider floating the diary down the river to dispose of it but are dissuaded when they witness Fat Tony (Joe Mantegna) and his goons getting rid of corpses the same way. They retreat to Bart’s treehouse where they begin reading Krabappel’s diary and discover where Superintendant Chalmers (Hank Azaria) hides his car keys. They steal Chalmers’s car and also find his coupons for free yogurt. Chalmers doesn’t get much help from Chief Wiggum (Azaria) and Lou (Désert) in retrieving his car. 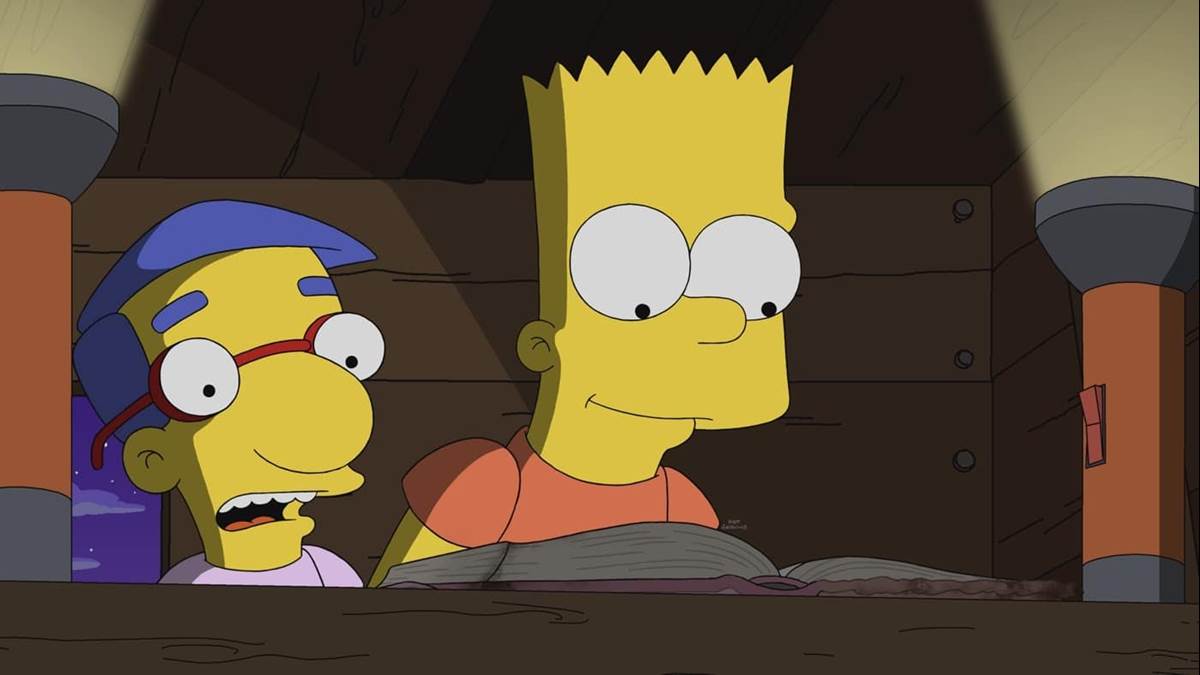 Bart uses Chalmers’s keys to access the Springfield Elementary School’s teachers’ lounge, where he finds that the teachers all use their breaks to work second jobs as telemarketers. Bart records Principal Skinner (Shearer) on his phone to use as bargaining material later. Later, Bart and Milhouse read Krabappel’s diary and are surprised to discover that she actually had a soft spot for Bart, who she refers to as her “spiky-haired buddy.” Bart envisions himself as the official presidential chair-tester after reading that Krabappel apparently thought he had potential. A montage displays Bart trying to live up to his potential by being a better kid and student. Taking a multiple-choice test in class, Bart decides not to simply fill in the bubbles to look like a skull but to apply himself and actually try to figure out the answers. At home, Marge celebrates Bart getting an “A” on his test with a cake, but Lisa doubts Bart’s success.

Marge has her own suspicions and searches Bart’s room for an explanation, tidying up along the way: “He’s clean, and so is his room.” Lisa takes over after Marge’s search turns up nothing and finds Krabappel’s diary in Bart’s treehouse. Bart explains his discoveries and Lisa quickly finds that by “spiky-haired buddy” the former teacher was referring to her cat and not her most troubled student. Lisa doesn’t have the heart to break the truth to her brother after he reveals he’s going to change other people’s lives for the better. Bart gives a bunny to Groundskeeper Willie (Dan Castellaneta), who appears as though he’s going to eat it, but really cherishes it as his new pet. Lisa hyperventilates and gets hives from the stress of withholding the truth from Bart. Dr. Hibbert (Shearer) prescribes children’s Xanax, but Marge doesn’t like the idea so Hibbert suggests medication for her as well. At a school assembly, Skinner presents an award to Bart for showing dramatic improvement at school. Bart thanks Mrs. Krabappel for her inspiration and Lisa is told to lead a round of “For He’s a Jolly Good Fellow” before Bart brings his fellow students to the Laser Tag Water Park in Celebration. Lisa is left alone with Skinner, who concludes the assembly by telling Lisa not to use drugs, which she already doesn’t. “Most successful assembly ever.” 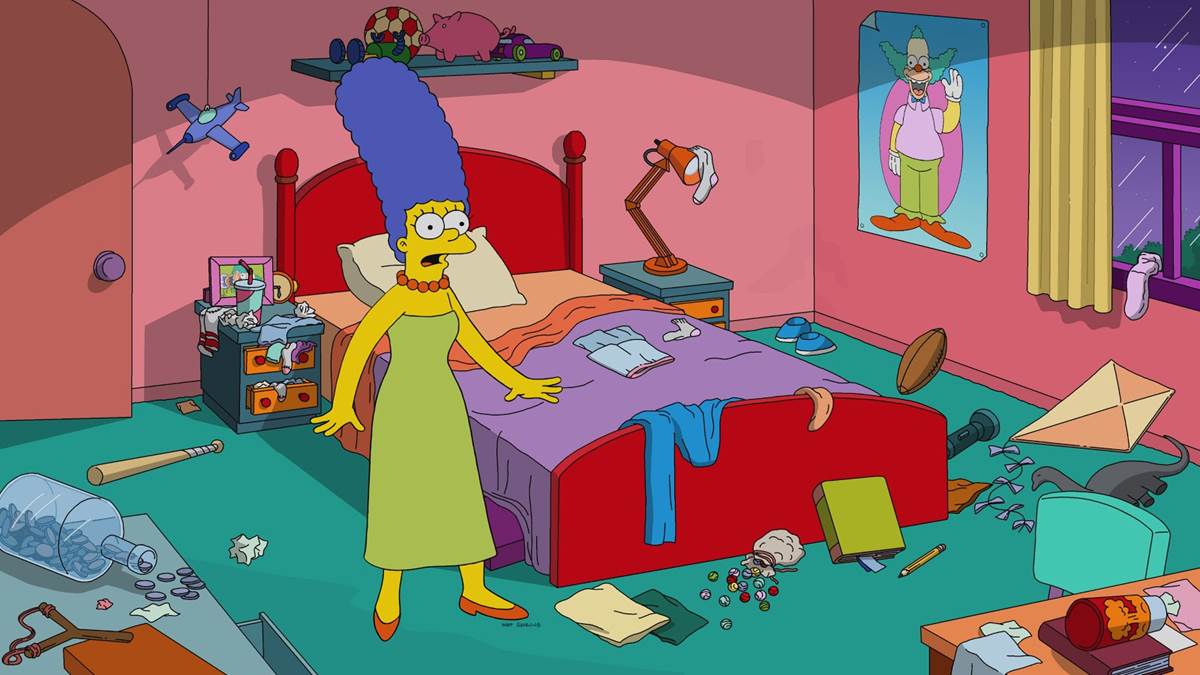 Encouraged by his recent success, Bart decides to enter the school spelling bee, though Lisa warns him about how publicly embarrassed he might be if he turns out not to be quite as skilled as he now believes himself to be. Bart proceeds anyway, but Lisa pulls him off the stage before he can even attempt to spell his first word. Lisa spills the beans about Krabappel’s cat to Bart using evidence from the diary: “It wasn’t me who had potential… it’s a freakin’ cat!” Bart sulks in his treehouse until Marge brings him food to console him, though it doesn’t work. Later, Ned Flanders shows up and tells Bart that he and Edna once considered leaving Springfield with Rod and Todd. But Krabappel decided she needed to stay because kids like Bart needed her, the reveal of which seems to cheer Bart up. Ned takes Edna’s diary home and secretly reads a passage where she says her marriage to Flanders made her life “a living dream come true.”

In a post-credit sequence, we see a montage of Edna Krabappel’s life as a teacher, with her cat, with Ned Flanders, and with Bart. 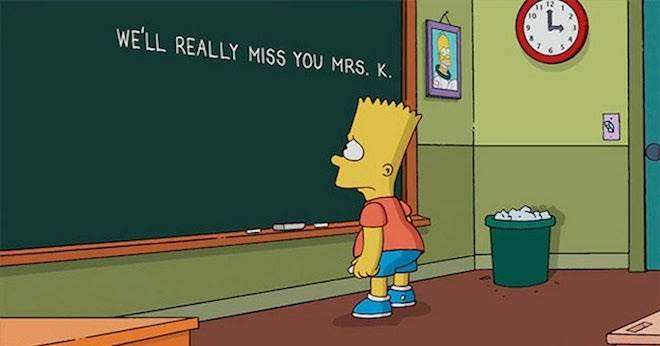