The very first “Classic Favorite” panel I chose came from “Civil War #6.” The story is definitely my all-time favorite. In other words, this wasn’t the first panel to make this series and it won’t be the last. While I went with the beginning of the end last time, this time I chose to go with the beginning of… the beginning.

With the introduction of the Superhuman Registration Act, Captain America was the first to take a stand. When Maria Hill, then director of S.H.I.E.L.D., tried to get Cap to register, he of course objects. That leads to this incredibly powerful exchange and eventually a physical altercation.

These two panels (yes, I’m cheating a little here) are a perfect summary of the superhero Civil War and what both sides are fighting for. Cap refuses to turn on those with whom he has fought side-by-side for so long. Hill understands the danger of enhanced vigilantes running free and wants to get them registered. This exchange and the ensuing firefight between Cap and S.H.I.E.L.D. agents is the official start of the Civil War. 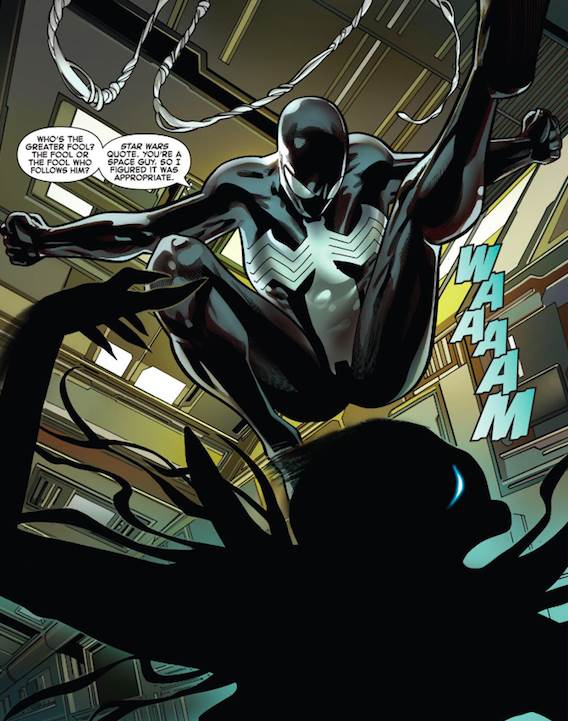 Whether it’s Miles Morales or Peter Parker, Spider-Man is always good for at least one hilarious quip in every issue. As he swings in to attack Mr. E (yes, that’s really his name) here, he decides to throw a Star Wars quote at the mysterious (oh, maybe it’s not such a bad name) villain.

Of course, Peter can never just play things cool. He decides to go a step further by explaining to him that it’s a Star Wars quote and justifying it by pointing out that he is a “space guy.” You can expect comedy from Spider-Man. You can’t expect him to be George Clooney.

This issue is loaded with panels like this thanks to its hilarious cast that also includes Monica Rambeau, Rocket Raccoon and Kang the Conqueror. The unlikely team makes for some really great banter and surprisingly affective action. It’s a really fun comic, with plenty of panels to love, but this one is my personal favorite.

You can check out “Symbiote Spider-Man: King in Black #4” now.