After last week’s episode introduced us to the idea of two of our favorite heroes struggling to deal with their post-blip lives, this week they jump right back into the Avengers-style action we’re used to seeing from them. Bucky and Sam reluctantly team up to face a new threat and the new Captain America is here to further complicate things.

The episode opens with an introduction to John Walker, the new Captain America. While Marvel fans have spent the last week hating this new character (well, new to the MCU at least), we quickly learn that he’s not such a bad guy. We see him preparing for a media event as Captain America and telling his wife he doesn’t want to fail the people who are expecting big things from him.

After she reassures him and leave him to prepare, Lamar Hoskins, his partner interrupts his preparations. Walker tells him he’s tired of shaking hands and dealing with suits and he just wants to “do the job.” Hoskins explains that this is the job and that the suit comes with expectations.

Walker takes the football field of his old high school for the media event, which turns out to be Good Morning America. During his interview, he tries his best to be modest before host Sara Haines sings his praises and reads off his military resume. During this explanation, we see footage of him training with the shield. Walker admits he has big shoes to fill and says he closely followed Steve Rogers’ career. As we see Bucky watching this on TV from his empty apartment, we hear Walker say that even though he never met Steve, “he feels like a brother.”

Sam takes a look at a poster for the new cap before getting ready for a mission. Bucky shows up before Sam leaves and tells him he shouldn’t have given up the shield. The two trade some banter and argue over Sam’s decision before Sam explains that he’s going after the Flag Smashers. We see the conversation from the previously-released clip titled “The Big 3” and Bucky joins Sam on his mission.

We then see another clip we’ve seen before as Sam and Bucky get ready to drop in for their mission from a plane. Without explaining a plan, Sam jumps out of the plane and leaves Bucky behind. Bucky asks for a chute and Torres explains that they’re too low. Emulating Steve, Bucky says he doesn’t need one and makes the jump on his own. It doesn’t go so well.

The two find a building where the Flag Smashers are loading up a truck. Sam is very tactical in hs approach while Bucky wants to rush in and start the fight. After nearly blowing their cover, the two heroes watch as the Flag Smashers load up two trucks with what appears to be a hostage in one and drive off.

Sam and Bucky immediately pursue and Bucky quickly gets into the back of the lead truck where he finds the “hostage.” Only, she’s not a hostage, she’s one of the Flag Smashers and the fight begins. The heroes take on several Smashers on top of the trucks and things aren’t going well until Cap’s shield takes one of them out. We see Walker show up in a helicopter and join the fight with Hoskins.

Sam explains what’s going on with the Flag Smashers, including the fact that they’re super soldiers. He asks Walker how they were able to track the Smashers and Hoskins explains that they were tracking Redwing. Walker tells him the tech is government property and they’re kind of the government. Sam and Bucky question who Hoskins is and he tells them he’s “Battlestar” and John’s partner. This again is not a new character, as Battlestar worked with Walker’s Captain America in the comics. Walker tells Sam he’s just trying to be the best Cap he can be and it would be a lot easier with “Cap’s wingman” by his side. Sam doesn’t approve of that last line and walks off.

We catch up with the Smashers, who have arrived at some sort of safehouse provided by one of their supporters. We see that their leader, the girl from the back of the truck, receives two text messages from an unknown number that read “You took what was mine” and “I’m going to find you and kill you.” She appears nervous but doesn’t share the information with her team. One of them explains that the police are already looking for them and they won’t be able to stay there long. We see on his computer that the leader’s name is Karli Morgenthau, a slight change from the name of the comic book Flag Smasher villain, Karl Morgenthau.

Karli explains to her team that the GRC, a government organization designed to help reacclimate those who returned in the blip to the world, care more about those people than the ones who never left. She says “after tomorrow, there’s no going back” and asks if they’re all committed to their cause. With a chant of “one world, one people” they confirm their commitment.

Back on their plane, Bucky tells Sam they should take the shield and do this themselves. Sam reminds him of what happened the last time they stole the shield, brining up Sharon Carter, a character we know will be showing up in this series. He tell Bucky they have nothing to work off of and Bucky tells him that’s no entirely true. 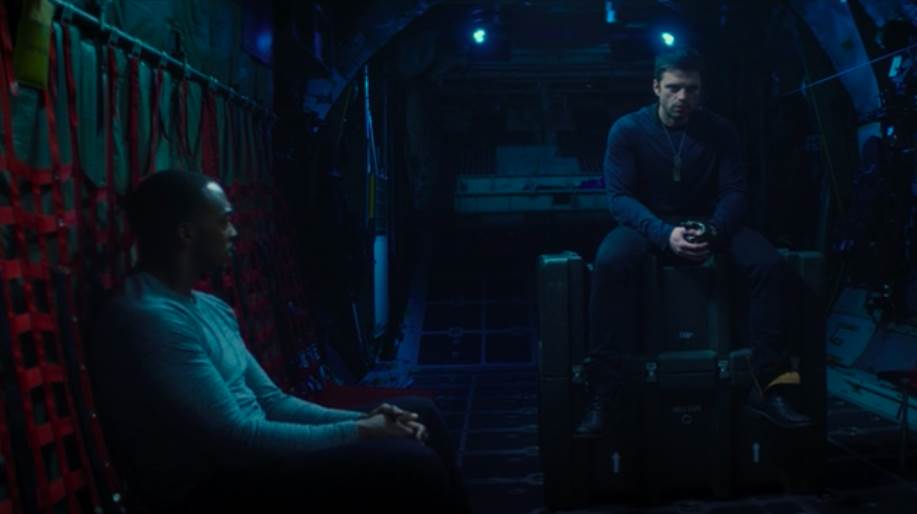 The two arrive in Baltimore and Bucky knocks on the door of a house. When a young man answers, Bucky asks for Isaiah. After some convincing, the heroes are let inside. An old man greets them and Bucky tells Sam Isaiah was a hero and was “like Steve.” Isaiah explains that he beat Bucky up, using some different words, back in the day. Bucky tells him there are more people like the two of them out there and Isaiah angrily tells him he’s not going to talk about it anymore and throws a container straight into the wall, showing incredible strength. Isaiah tells him he was put in jail for 30 years for being a hero and during that time, people were running tests on him and taking his blood. He tells Bucky even his people weren’t done with him, meaning Hydra had access to a super soldier. Isaiah angrily tells them to get out and the young man escorts them out.

These two characters are also not completely original. Isaiah Bradley was more or less the “Black Captain America” after surviving the super soldier creation process. Probably more important to the future of the MCU, the young man here could just be his grandson Elijah Bradley, who later goes on to become the leader of the Young Avengers as a hero called Patriot. 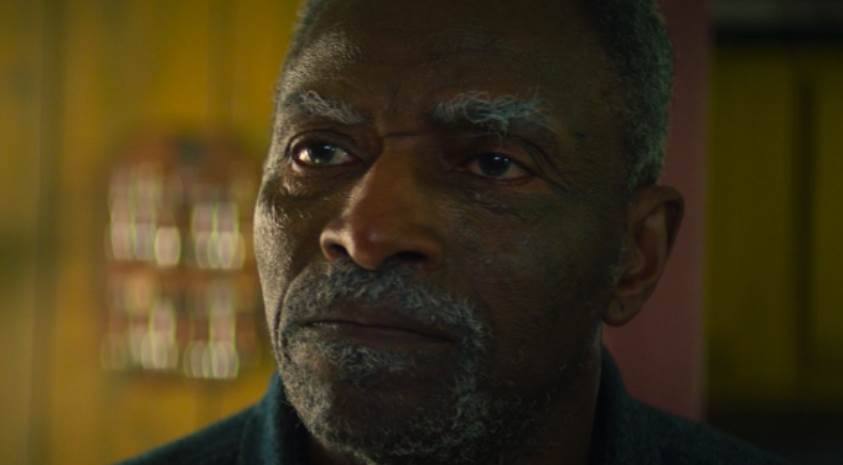 Angry with Bucky about not knowing about Isaiah, Sam starts a shouting match with his partner in the street. They’re interrupted by the police, who try to get ID from Sam until they realize who he is. They apologize to Sam but arrest Bucky for missing this court-mandated therapy session.

At the station, Dr. Raynor, the therapist we met in the last episode, meets Sam. We then find out Walker is the one who got Bucky out of jail and the new Cap introduces himself to Raynor. He tells the doctor that he needs Bucky so he won’t be following his strict schedule anymore. He also tells her to do whatever she needs to do with him and send him out and lets Sam know he’ll be waiting outside.

Raynor tells both Bucky and Sam they’re going to have a session now. The three sit in an interrogation room as the doctor tries to run them through some exercises. Bucky eventually asks Sam why he got rid of the shield. He tells him Cap was wrong about Sam and if he was, he was wrong about him too. Clearly, Bucky is still doubting himself. Sam tells him he did what he thought was right. The two agree that they can get the job done together and then never see each other again.

They meet up with Walker and Hoskins, who tell the heroes they’ve learned some information about the Smashers. But, for everything they’ve learned, they don’t know where they are now. Sam backs an aggressive Bucky off and tells him Walker is right, that they have to find them. However, he goes on to explain that Walker and Hoskins have rules of engagement whereas Bucky and Sam can be more “flexible” and it wouldn’t make sense for them to work together. Before they walk off, Walker tells them to stay out of his way.

The Smashers load up a plane when one of them explains that they’re out of time and that the “Power Broker’s men” are coming. They rush to finish up and one of them tells Karli he’ll stay behind to hold them off. He pushes a light pole down in front of the cars and steps out to face them as the Smashers get away in their plane. The men open fire on the brave Smasher, killing him instantly. A man makes a phone call and simply says “they got away.”

Another Marvel Comics character, The Power Broker is a villain responsible for creating and supplying several villain. Among his most notable clients are actually John Walker and Lemar Hoskins. Perhaps the new Cap has some ulterior motives for finding and stopping the Flag Smashes. Maybe he’s not such a good guy after all.

Bucky tells Sam he knows what they have to do and brings up the fact that Isaiah was referring to Hydra as Bucky’s people. Sam sees his next sentence coming an preemptively tells him no. Still, Bucky tells him he wants to talk to Zemo, the returning villain from Captain America: Civil War. As the episode comes to a close we get a shot of Zemo sitting in his cell. 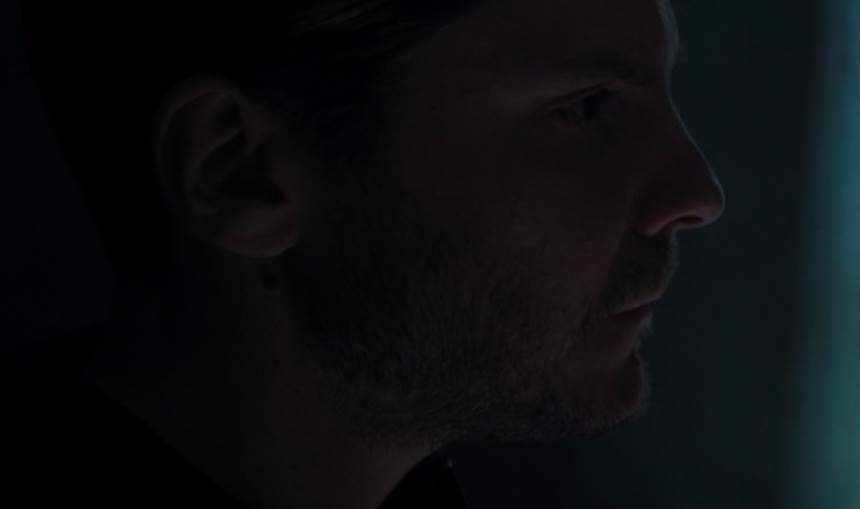 While I may have had some concerns after the first episode regarding whether or not they got into the story enough, those concerns are now gone. This episode accomplished a lot and never felt like it was moving too fast. Not only did we get to know John Walker, but we were also introduced to several new characters, got to see Bucky and Sam work together and got a glimpse of Zemo, who may not actually be the big villain of this series. There’s still a lot of story to tell here, but the way this series is moving, it looks like it will be done in the most entertaining and explosive way possible.