It’s an unwritten rule that any talent-based competition show on ABC must have a Disney-themed episode. Dancing with the Stars does it, American Idol does it and tonight, Pooch Perfect did it. It’s “Disney Night” and it’s all going to the dogs as host Rebel Wilson kicks off the show from her dressing room in a Cruella De Vil wig. Noticing a dog in the same wig, she turns around and says “Well, one of us has to get changed.” For the first challenge of the night, the Immunity Puppertunity, the assistants are stepping into the spotlight with the “Swap-A-Roodle Challenge.” The professional groomers become assistants and their assistants become groomers for two-and-a-half hours. With just 6 teams left, whoever wins the challenge gets an automatic pass into the quarterfinals.

2.5 hours. There wasn’t a specific assignment they had to follow, but the judges were looking for the quality of both the grooming and styling. While having their grooms judged, Corina revealed the importance of this assignment, sharing that she was recently diagnosed with early stage ALS and will soon be wheelchair bound. It became a tearful moment for everyone in the room as she won the challenge.

Moving on to the moment all Disney fans tuned in for, this week’s “Ultimutt Challenge” was themed to Disney Dogs. “Be an Imagineer and your canvas is your canine,” Rebel Wilson shared as the doggy doors opened to reveal the adorable pups who are about to get a makeover. “Let’s start the clock and release the Plutos”

Each of the teams approached the assignment a little differently, choosing an animated film as their inspiration. Some decided to transform the dog into a character while others decided to make a vignette. The teams chose the following films:

The heat really intensified during this challenge, bringing many of the contestants to emotional tears and even causing Philip to walk out, with Riza coming to Josh’s rescue. The lone Disney song of the night is played during this segment, “A Whole New World” from Aladdin. With just 10-minutes to spare, Rebel Wilson makes a joke: “If you wanna end up being the lion king, you better Mufassa.” 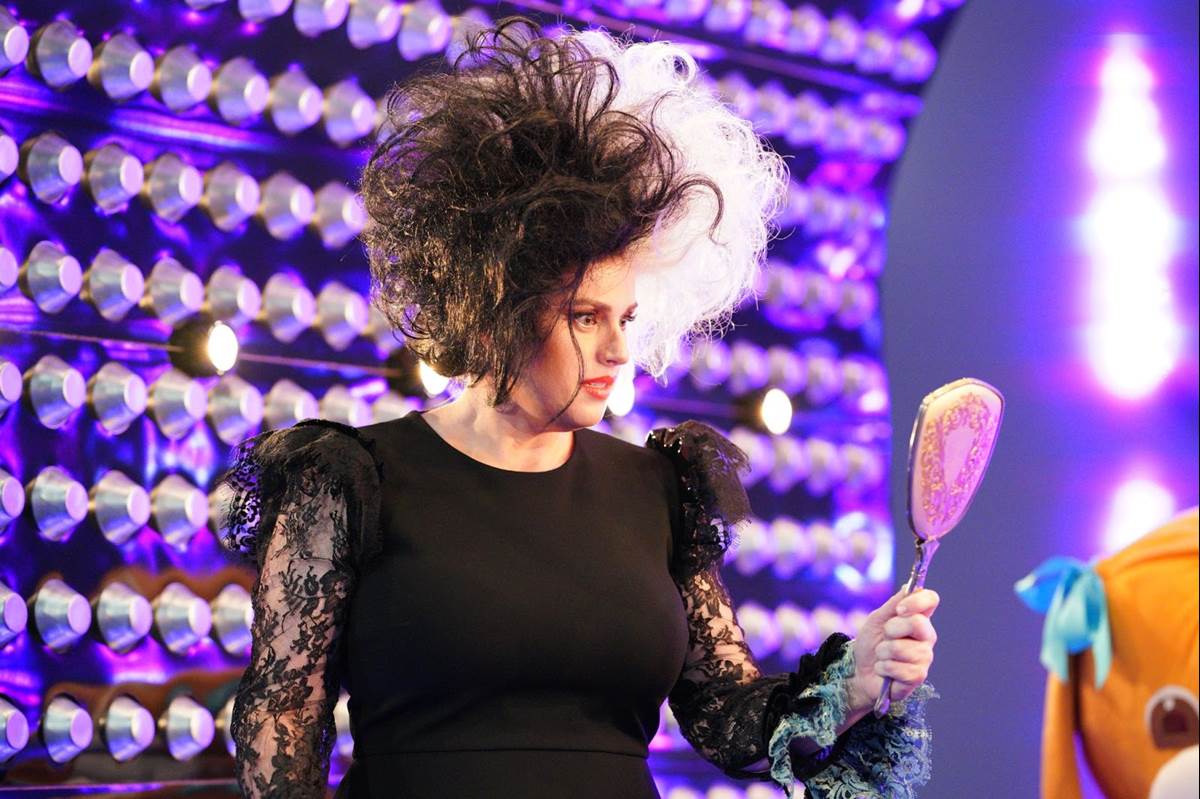 Rebel gets back into her Cruella costume for her entrance to the dog walk, leading two costumed dalmatian characters down the runway. The first contestant judged is Garbriel, who has turned his pooch into Pegasus with Hercules hanging onto the side. Lisa Vanerpump loved the design, but felt that some of the colors were wrong.

Riza’s a bug’s life dog featured elements of the characters, with the head painted purple and topped with a crown for Princess Atta, a ladybug shell on its back for Frances, and a green bottom for Heimlich. Lisa said it was the first big groom she’s seen from Riza and Dr. Callie Harris loved all of the details on each character.

Deb’s Brave-inspired pooch featured Merida and her curly red locks down the pup’s left side, with the three bear brothers carved into the right. Jorge Bendersky was wowed and exclaimed “This is Disney!”

Alyssa’s Lilo & Stitch design featured ocean waves on one side, complete with Pudge, and a beach that led into a galaxy on the other, with a lei flower necklace made of fur. She even placed three Hidden Mickeys in her design, which the judges really appreciated. Dr. Callie called it “Living art” and Jorge loved the shapes she created.

Philip’s design used the dog’s tail to become Ariel’s fin, with the mermaid laying on the dog’s back surrounded by characters on the side. Dr. Callie loved the tail but Jorge felt like the mermaid should be on the side and her face details could have been better.

Macie, who had immunity, split the dog down the middle and dressed its fur to look like Elsa on the right side and Anna on the left. Lisa loved how delicate and pretty the design was and Jorge felt like Disney could make a toy of her dog and sell it. “Round of apaws,” Rebel called to the costumed audience as this week’s Best in Show was announced. Alyssa won the Disney Dogs challenge, her second Best in Show so far. “Unfortunately, it is a small world after all,” Rebel stated. Since the show is down to so few contestants left, they’re no longer doing a bottom three. The team eliminated was Philip and Josh. “Good night and good dog.”

Pooch Perfect returns Tuesday, May 4th with “A Doggy Walk Down Memory Lane.” Here’s the official description from ABC:

It’s the most A-List Immunity Puppertunity yet as dogs turn into stars in the Celebrity Dog-pelgangers challenge. Then, the teams compete for a spot in the semifinals during the doggy decades Ultimutt Challenge where groomers must travel back in time and style their dog based on their favorite historical decade.