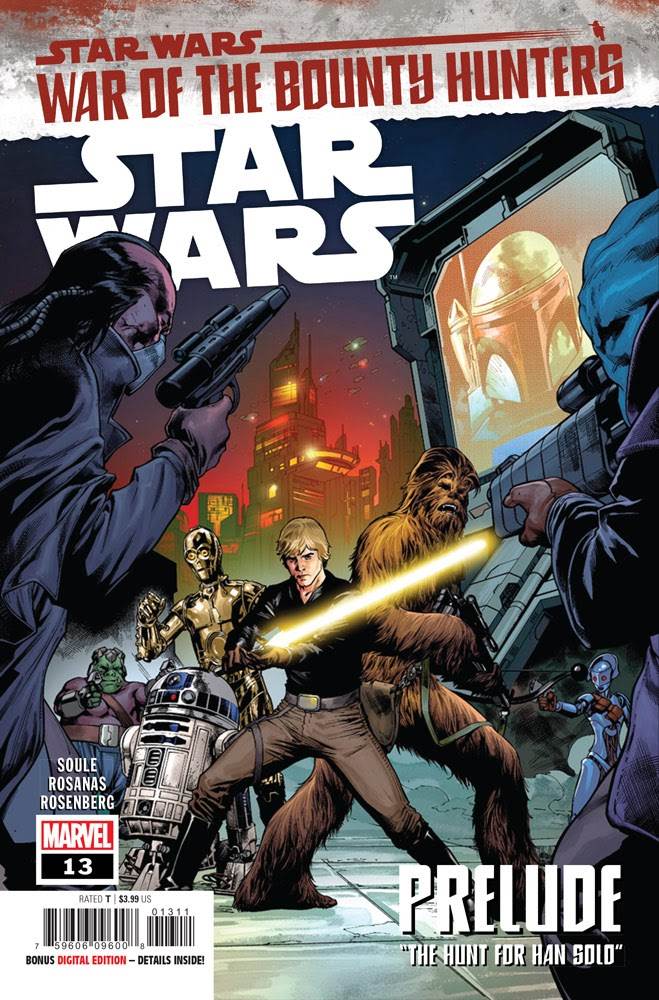 In Star Wars: War of the Bounty Hunters Alpha, we saw Boba Fett having to make a pit-stop on the smuggler’s moon of Nar Shaddaa when the carbonite block containing rebel hero Han Solo began deteriorating before he could deliver it to Jabba’s Palace. In Star Wars #13, Chewbacca gets information from a contact on Nar Shaddaa about Fett’s possible whereabouts, and naturally he and Jedi-in-training Luke Skywalker decide to embark on a mission to try and rescue their friend. The issue opens with Luke honing his lightsaber combat skills against a whole bunch of remote droids, when he’s interrupted by C-3PO, who tells him R2-D2 has information for him. Why Luke decides to completely ignore Artoo once Chewbacca bursts into the room isn’t made entirely clear, but regardless he quickly becomes distracted by the possibility of saving Han from the grasp of Boba Fett so the trusty droid’s bid for attention gets pushed aside until later. Leaving Lando and Leia behind for more satisfyingly spelled-out reasons, Luke and Chewbacca fly the Millennium Falcon to Nar Shadda, bringing the droids along with them and meeting the Wookiee named Sagwa (first seen being freed from the mines of Kessel in Solo: A Star Wars Story), who takes them to the battle arena where Fett recently won the championship. This leads to a showdown with members of the Kanji gang when Luke starts asking too many questions about the bounty hunter’s whereabouts. What follows is a perilous shootout at the arena’s box-office window, followed by a daring escape after the Kanji manage to figure out they’re dealing with a lightsaber-wielding Jedi Knight. It’s unfortunate that this adventure turns out to be something of a dead end for our heroes, as they flee on the Falcon having not accomplished much except recruiting Sagwa to the Rebel Alliance. But despite not having tracked down Boba Fett, in the end Luke manages to make time to listen to R2-D2 and gets a valuable piece of information that deepens our understanding of his whereabouts in the Star Wars sequel trilogy. There’s also a cliffhanger ending that is sure to pay off in future issues of this comic, if not in other War of the Bounty Hunters tie-in titles coming down Marvel’s Star Wars pipeline. I have to say I’m relieved to see the individual installments of this massive crossover event interweaving with each other so soon, as I was worried these “Prelude” issues might continue to feel more like piece-moving setup than actual storytelling. But writer Charles Soule remains at the top of his game and– in collaboration with equally talented artist Ramon Rosanas– his “The Hunt for Han Solo” does an admirable job in building interest in the event. Star Wars #13 is available now wherever comic books are sold.