Hello and welcome to Laughing Place’s regular recap of new episodes of The Simpsons on the FOX Network. This week’s episode, the season finale for the long-running animated sitcom’s 32nd season, is entitled “The Last Barfighter” (a play on the title of the 1984 science fiction film The Last Starfighter). 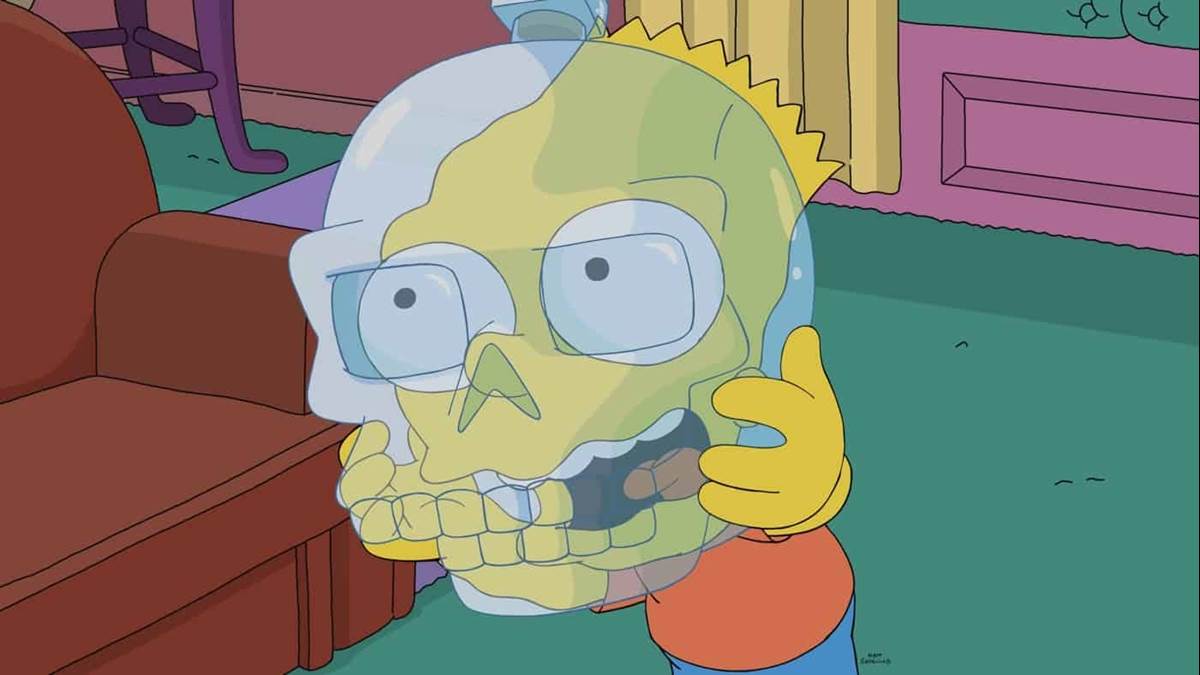 The episode begins with a motorcyclist arriving at a secret society meeting. The biker removes his helmet to reveal Moe Szyslak (voiced by Hank Azaria), who orders a drink from “The Confidential”– a bartender-only bar “where they listen to the listeners.” At the Krusty the Clown studios, Krusty (Dan Castellaneta) announces he’s cancelling that day’s taping, so Bart (Nancy Cartwright) and Milhouse (Pamela Hayden) are forced to attend a spanish-language late-night talk show hosted by Bumblebee Man Eric Lopez) that Milhouse seems to enjoy but Bart is mystified by. Bart gets selected out of the audience to participate in an embarrassing game featuring an old man in a baby costume, and he somehow wins, ultimately getting to select from prizes behind three doors. He selects a mysterious crystal skull instead of a dirtbike, and at home, Homer (also Castellaneta) tells him it’s full of a very special booze.

“Bart won that skull full of tequila; he can do what he wants with it… except drink the tequila,” says Marge (Julie Kavner) after Homer demands he hand it over. Bart taunts Homer with his crystal skull full of tequila to the point where Homer sneaks into his son’s bedroom at night and switches out Maggie for the container, Raiders of the Lost Ark-style. Homer brings the skull to Moe’s where Lenny declares it to be like the one “from my least favorite Indiana Jones movie and most favorite Shia LaBeouf movie.” The barflies invite Moe to partake in the tequila with them, but Moe says it’s frowned upon by his secret society. But when his patrons call him their friend, Moe can’t resist joining them in their fun. Upon the barkeep taking a sip, the crystal skull eerily tells Homer he’s ruined Moe’s life. The next day, Moe wakes up with a terrible hangover, and we get a flashback montage to the previous night’s events when he partied for hours with the other guys around the Springfield Squidport, eventually getting their teeth whitened and curling up together on a bench and groaning much like the local elephant seals. Reverend Lovejoy (Harry Shearer) and his wife Helen (Maggie Roswell) show up and Moe reveals a secret about them, then tells his friends that he knows all of the townsfolk’s secrets thanks to his secret bartender society. Moe even knows things that Lenny (also Shearer), Carl (Alex Désert), and Barney (Castellaneta again) are embarrassed about. “Moe, you’ve officially gone from fun-drunk to mean-drunk,” says Homer, and Moe lets him have it, berating him about his poor fathering skills. “You’re worse than a mean drunk– you’re an honest drunk.”

A rat shows up at Moe’s Tavern with a secret coaster, and summons Moe to The Confidential, where its bartender named Artemis (guest star Ian McShane, parodying his character from the John Wick films) orders him to surrender his key to the secret society. “It was nice being part of a place that was bigger than me, and also super weird.” Not only does Moe lose his membership, but Artemis also threatens to cut off his friends from drinking entirely. Moe runs to the Springfield Nuclear Power Plant to warn them, though he’s confused to find that Barney doesn’t work there with Homer, Lenny, and Carl. The group FaceTimes with Barney, who gets injected with anti-booze– a drug that makes it so you can never drink again– by a stealthy bartender. The friends witness all of the anti-booze’s terrible symptoms via Barney. “Wait, what about rum cakes and other boozey desserts?” asks Homer. “Never again,” answers Moe, and Homer falls to his knees in terror. Bartenders around town get messages to cut off Moe’s friends– not to mention inject them with the anti-booze. “How many bartenders could there be in Springfield?” asks Lenny. “How many people in this town are miserable at work and at home?” responds Moe, who has a showdown against his colleagues in the street, whipping them with a disgusting towel. The friends hide in an alley and Moe tells them to leave town, but when Lenny and Carl run away they’re injected by a barmaid. Homer runs home and tells Marge they’re leaving Springfield forever, only to find Dr. Hibbert (Kevin Michael Richardson) on the couch saying that he worked his way through medical school by bartending. Hibbert injects Homer with the anti-booze, and his family is unsurprisingly ecstatic to discover that he can never drink again. We then flash forward to three months later, when Homer has become a model father.

Homer gets a coffee from a Starbucks-esque cafe and runs into Lenny, Carl, and Barney, all of whom have amazing lives now. Even Barney got his job back at Auto Zone, but Carl says Moe isn’t doing quite as well since losing his bar customers. They visit Moe at the omelet bar where he’s working and take pity on him. “Even though we can never drink again, we still want you as our bartender.” They carry him off on their shoulders and enjoy waters together at Moe’s Tavern. “Who knew you could drink water at a bar?” notes Lenny. “It’s still watered down,” admits Moe, to a round of laughs. Artemis shows up and offers the gang an antidote to the anti-booze, which everyone but Homer takes immediately. Homer runs off to be with his family, and all the bartenders in town pursue him, having received another signal from the secret society. In the coda, Bart, Lisa (Yeardley Smith), and Maggie find the broken crystal skull on the sidewalk. The skull reassembles itself and gives a cryptic warning to the three Simpson children, entirely in Spanish.