The reviews are in and Disney’s Cruella is Rotten Tomatoes certified fresh with a 75% rating. We’ve scoured the internet like a fur-crazy fashion obsessee on the hunt for spotted patterns to bring you quotes from multiple critics to help you decide if you want to venture to a local theater or purchase Premier Access to stream Cruella on Disney+ on May 28th. Here’s what the reviews are saying, starting with our own. 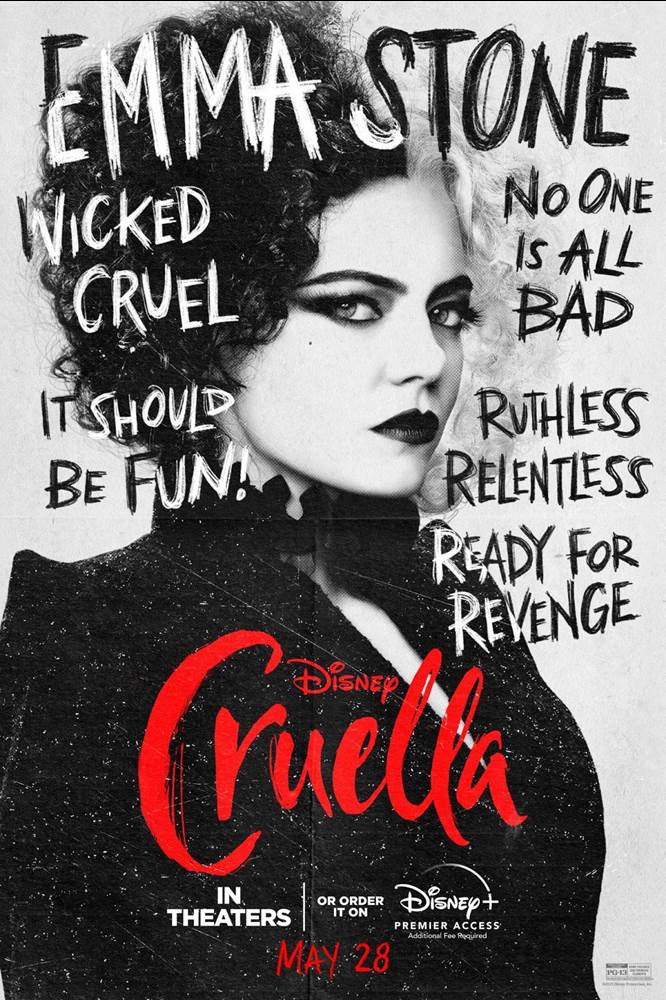 Anarchy abounds in director Craig Gillespie’s latest film, a heist movie with an added dose of revenge. Expert pacing and well-placed moments of comedy, in addition to a ridiculously fun soundtrack, keep Cruella feeling fresh throughout. Those that accept the film for what it is, a new take on Cruella de Vil that doesn’t fit the mold of the fur worshiper who would kill ninety-nine puppies to make one coat, will find themselves thoroughly entertained. A few moments of bad CGI aside, it’s one of Disney’s most original animation-to-live-action adaptations to date, transforming a villain into an antihero.

Brazenly bold and expertly woven, Cruella excels on multiple fronts – prime being its dark humor and aesthetics, and a deliciously sublime Emma Stone.

Directed by I, Tonya’s Craig Gillespie, opening concurrently in cinemas and on Disney+, Cruella is the very best of the recent live action crop since The Jungle Book – a raucous, vibrant romp with some outstanding central performances. A brand new story and way more fun than Maleficent or Universal’s dour Snow White and the Huntsman, Cruella maybe a prequel to 101 Dalmatians, charting the rise, fall, and rise again of an icon, but it works just as well, if not better, as a standalone.

The biggest surprise of 2021, Cruella is a bold, striking, and visually stunning delight featuring a fierce, transformative performance from Emma Stone that sees her make Cruella de Vil entirely her own. A must-see.

This studio franchise entry makes some big, wild swings that are simply spectacular. Along with the glorious gonzo fashion, this cacophonic film offers complicated female characters with unapologetic attitude, grand ambition, and a truly bonkers backstory that's better left unspoiled. These glimpses at greatness had me wishing it did more than scratch at camp. Swaying between outlandish and expected, the movie ultimately feels like a clumsy compromise. Still, with grimy whimsy, crackling leading ladies, imaginative twists, and plenty of eye-popping spectacle, Cruella is a hell of a good time.

Cruella, truly devilish, shows you what these Disney remakes are capable of if they are handed to a genuine artist and allowed to experiment and play. Too often these films feel as though they are checking boxes and simply making sure that they are delivering what the company feels audiences are nostalgic for. With a film like this, divorced from its source material by many decades (and already established as ripe fodder for reinvention, as the 1996 film proved), it was able to use the original as a blueprint but focused more on building everything else from scratch. Yes, it’s recognizable, but the familiarity never gets in the way of the invention. And that is Cruella’s biggest gift. Like a great fashion line, it’s understandable but electrically new.

The new film Cruella, purportedly the origin story of one of the most memorably terrifying Disney villains ever, wants very badly to overhaul its main character for an edgier, presumably pre-teen and teenage crowd, sometimes seeming more inspired by the Joaquin Phoenix-starring Joker than by 101 Dalmatians. But while Cruella is bursting with style and features two very arch, fun performances, it’s never really able to avoid the spectre of all those spotted puppies and the image of a terrifying woman trying to kill those dogs to make a fur coat.

All in all, Cruella is much better than it needs to be, and is hampered primarily by the fact that it’s a Disney movie, both in the sense that it has to heel to its animated and live-action predecessors, and in that making its main character a genuine antihero isn’t an option. As the main character of a Disney film, Cruella has to remain sympathetic, and as a Disney production, Cruella has to make some ham-handed attempts at moralizing. Those constraints might hold the movie back, but like the punks who inspired its costumes, it at least knows how to make bondage gear look good.

Cruella’s spirit for elegance and style is appreciated and the entire cast plays and lives within its world very well. For a Cruella origin story, as sticky as that was going to be, Disney pulls it off in an unexpected, bold and entertaining way. It’s not sympathetic, Cruella is unapologetic and thrives for being gravely confident in itself.

Cruella has one foot firmly in the Gothic kiddy fun of the Addams Family movies or the works of the young Tim Burton and another foot in the brightly colored goofball tone of the Paddington movies. Though it’s not as good as any of the films I’ve just named, it mostly finds a way to blend their influences together — a credit to its director, Craig Gillespie, who is low-key one of my favorite unsung filmmakers right now.

Cruella isn't going to go down in history as one of Disney's strongest films, but it has certainly raised the bar when it comes to their live-action catalog. While this movie is definitely more adult than most Disney films, don't let the PG-13 rating scare you and the family away. There are definitely darker elements to the movie and some intense moments that might frighten the young kids, but if your little ones could handle Cruella's terrifying moments in 101 Dalmatians, they should be fine.

While overlong and at times too self-conscious in its quest for period-piece hipster status, Cruella is a visual feast, from the dizzying array of outfits designed by and worn by Emma Stone’s Estella/Cruella to some striking, glam-inspired makeup to dazzling set pieces with dozens of extras wearing amazing ensembles. Reynolds Woodcock from The Phantom Thread would pass out from the sheer overwhelming number of scenes involving fashion design, discussion of fashion design, more fashion design — and pop-up fashion events taking place during traditional fashion events. This is a VERY fashionable film.

Disney’s Cruella careens into theaters and on Disney+ with Premier Access this Friday, May 28th.