And we’re back for another recap of Freeform’s Motherland: Fort Salem. This week we follow our trio around Fort Salem and outside too as the Army begins testing girls to learn if they’re witches. Ready? Let’s jump into the show! 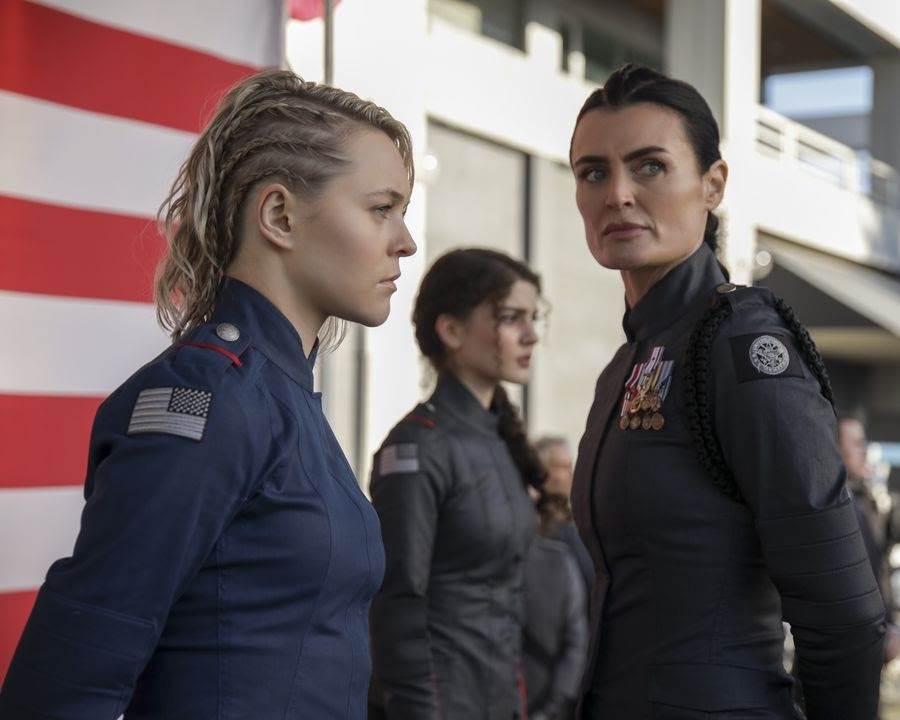 Please note this recap contains spoilers for season 2, episode 4 “Not Our Daughters.”

The episode opens with an advertisement following a young woman through her recruitment, enrollment and service as a witch in the U.S. Army. She proudly claims she “found her voice” as does Penelope Silver. A chorus of “America the Beautiful” plays throughout the commercial replacing ‘brotherhood’ with ‘sisterhood’ and ‘God shed his grace’ to ‘God shed her grace.’ The ad ends with a close up on General Alder who encourages young women to be tested.

Under a stormy sky at Fort Salem, Adil and Gregorio are studying Mothertongue when Abigail interrupts their session. Gregorio quickly excuses himself and Adil also gets up to leave. He asks Abigail if anyone knows the weather is her doing and she says it’s best they don’t. He suggests she undo it, but she says she can’t because her voice is blown out. She asks him to join her for tea, but he says he has to pack. He’s going to India where Kahlida and the Hague think they’ve found a new home for Tarim. He tells Abigail that it’s been made clear to him he’s responsible for the death of his people. She says that’s not what she meant, but he cuts her off, “you still said it. And it might not be entirely wrong.” He thinks the least he can do is help the survivors get settled.

As for the trio, Tally and Abigail are training with their scourges and discussing Tally’s vision and how Abigail hurt her throat. As they trade words and aggressively attack their targets, Raelle comes in asking what she’s missed. Tally mentions that Adil is leaving, and Raelle seems surprised. She also asks about Alder ‘homework” and Tally says there was no record of her presence at the Martyrdom in Liberia, but she knows Alder was there.

We cut to Alder’s office where she’s addressing several senior witch leaders, specifically Petra and Anacostia. Petra tells her it was her decision to have Anacostia meet up with Scylla, but Alder is not happy. A defensive Petra states that at least now they know the Camarilla are using hearing tests to detect witches, and Anacostia chimes in saying now they can reach the sisterhood faster. Alder dismisses Petra and approaches Anacostia asking if she works for Petra now. Without looking at her, Anacostia says “you set the bar for breaking protocol pretty high” then proceeds to mention how Alder affected President Wade and got the approval to begin testing girls. The women exchange words before Alder asks if Anacostia put a Fetch on Jack, noting he’s likely to report to his superiors. She gives her further instruction and Anacostia says it’s Petra’s mission to which Adler responds, “it’s my Army.”

At Willa’s home, a witch from another Spree cell stops by with a request, but Willa denies any assistance. Scylla overhears and asks Willa about the cell. Willa is concerned that they’re short-sighted, remarking that this is not the military. While she’s speaking, Scylla spots a picture of Raelle one the fridge and swipes it. She tells Willa that Jack is on the move with the test results and this pleases Willa. She also tells Scylla to keep the picture, commenting how she too misses Raelle.

At the U.S. Armed Forces Matrilineal Verification Center (for the Army, Navy, and Air Force) Alder speaks to a reporter about the new testing centers that will be opening and how the military will test it’s potential witches. Outside of the building a group of protesters are holding up signs and chanting “not our daughters” in clear opposition to the testing about to take place. Meanwhile a woman arrives at the building with what appears to be a cake box that she passes to a security guard, skipping a metal detector. He gives the box to another woman who opens it revealing explosives. Several people approach her and grab a device, planting them out of sight.

Back at Fort Salem, the trio dines with Petra who reminds Abigail that her choices for handfasting are getting slimmer. Abigail argues that fighting the Camarilla is more important than securing the bloodline, but Petra tells her there are many ways to fight the enemy. Tally changes the subject, asking about Liberia and Martyrdom. Petra says that was before her time. Tally ponders aloud why Alder isn’t mentioned in the stories having “heard” she was there along with Sergeant Batan. Petra wonders where Tally is getting her information and encourages her to find a source closer to the story.

M gathers the cadets and tells them Alder has ordered their assistance at the testing center to help keep the new witches at ease. She tells Raelle she’ll be assigned to Alder’s personal security detail and tells Tally she won’t be taking the bus. At the testing center, Anacostia and Scylla are parked outside and spying on Jack Orsatti. Scylla stares at the picture of Raelle and asks Anacostia how she is. Anacostia tells her to stay focused on the mission. Jack gets out of his car and joins the protesters. He passes through security and women follow him at a distance when they encounter Shane and Bonny. The couple hand them face masks saying the Army is trying to identify protesters. Scylla thanks them and the women take in their surroundings.

Vice President Silver pulls up to the training center in a limousine with Penelope and Tally in tow. He thanks Tally for taking Penelope under her wing, saying he wouldn’t have known what to do with her. Penelope is offended by his comment and the way he’s treated her since she discovered her gift. Tally says that this change is difficult for everyone, the cadets and their parents. Vice President Silver says he hopes this performance will help put everyone at ease. 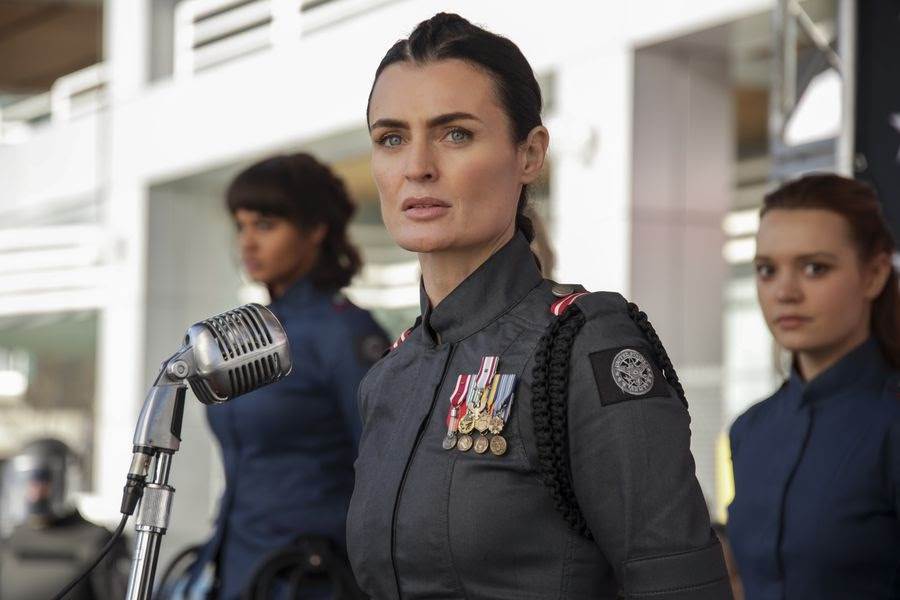 Anacostia and Scylla have put on their masks and are watching Jack’s every move. He’s not protesting with the others, but he’s also not leaving. Anacostia suspects he’s waiting for something. Scylla spies Raelle and tells Anacostia they need to leave, but Anacostia refuses. Meanwhile, Penelope approaches the stage and begins to sing seeds, causing three spouts of water to arise from a small basin of water. The crowd quiets and watches her, but resumes chanting as Alder approaches the podium. Anacostia and Scylla join in the chanting shouting “traitor.” Alder keeps talking and summons a woman who will be their first recruit. She asks the crowd to respect the woman who looks terrified as she approaches the stage. Tally escorts her inside. Two men jump the crowd barriers and throw flaming bottles at Alder. Raelle yells for her to duck and the accelerant hits the United States flag.

In the testing center the woman, Shireen, completes her testing and is shocked to learn they don’t need to draw her blood. She tells Alder she’s always felt different and thanks her. She seems relieved. Outside, Anacostia and Scylla ponder what Jack is waiting for when he starts to move. Scylla follows after him and Anacostia talks to Alder through Farspeech, reporting that the Camarilla have at least one person on site and they’ve put something in motion with the Movement and law enforcement. Alder acknowledges and thanks her.

Alder and Petra weigh their options, knowing they need to get the crowd to disperse. They don’t want to alert the public that the Camarilla are back and Alder decides they’ll lie and say it was the Spree. Vice President Silver heads to his limo with Penelope following him, but she hesitates. She asks what kind of message it’ll send if she leaves. He tells her running and falling back are not the same and that once she’s deployed, there’s nothing he can do to protect her. He fights back tears pleading for her to come with him and she agrees. 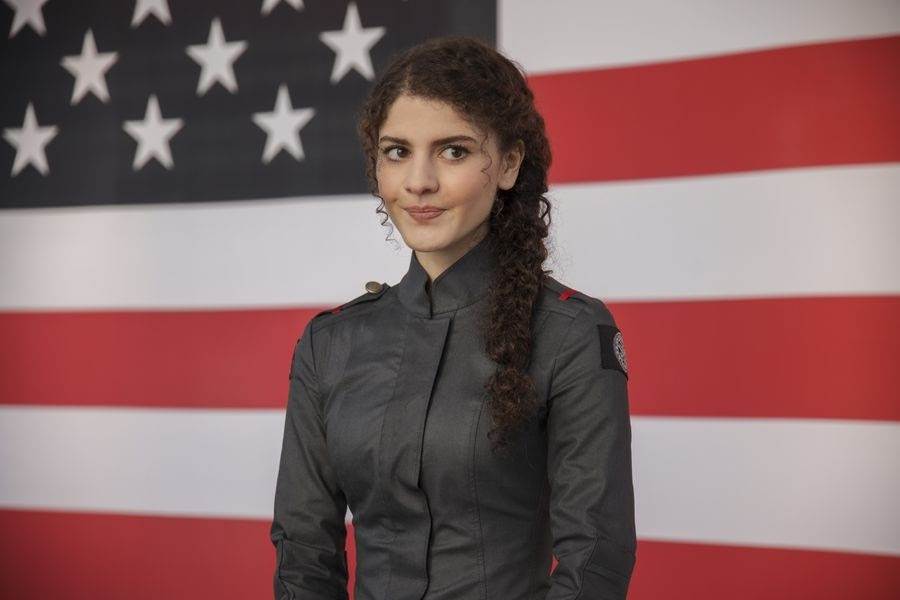 As night descends on the crowd, M tries to receive orders in Farspeech but it starts to glitch. A sudden loud burst causes the witches to cry out in agony and then another voice speaks in Farspeech calling specifically to Abigail. It’s Chevel. Tally says that’s impossible, and Abigail asks where it’s coming from. Tally tries to latch onto something, but says whatever caused the glitch is messing with her sight.

Abigail goes in search of Charvel following her voice. She reaches a parking garage and sees a figure wearing a red ski mask. The speech is much clearer and Charvel says she’s been waiting to finish what they started at the wedding. Suddenly a van pulls up behind Abigail and more red hooded figures emerge.

Back up by the protesters, the cadets discover the bombs and M tells the unit to start moving people out of the area. Shane speaks directly to Raelle, saying the army wants their daughters to die. She makes an impassioned speech telling the group that some daughters may be called, but they’ll be in great company. Scylla is in the vicinity and hides, but hears everything Raelle is saying.

Still close to the bombs, Tally begins to hear the sound they’re admitting and senses the detonation. She calls for Raelle right before they go off. But instead of an explosion, there’s a soft blast that knocks everyone to the ground. People start to get up and run off, while Raelle and Tally look for Abigail.

In the garage, Abigail tries to sing, but her voice is still not healed. She uses her scourges, but her assailants have small sickle-like knives that cut her weapons short. She’s overpowered and Chavel comes to her and says “My voice was easy enough to slice out. I can’t wait to see what he can do with yours.” Chavel then takes her mask off to reveal a man. He holds up a small blade and taunts her to sing before placing the weapon against her throat. But before any damage can be done, Tally and M come to the rescue fighting off the attackers. Tally comforts Abigail telling her it’s over.

Raelle observes what’s happening around her and sees law enforcement in riot gear attacking protesters. Someone throws something at her hitting the side of her head and leaving a bloody stain. In the confusion she looks around and makes eye contact with Scylla and they hold each other’s gaze for a moment. Someone knocks Raelle down and when she looks up Scylla is gone, but Raelle finds the picture of her younger self.

At Fort Salem, Petra shares her concern with Alder that the Camarilla are after Abigail, stating that this is the second time her daughter has been attacked. In the infirmary, the trio regroups and Abigail feels foolish for walking into the trap and thinking it was just Spree. She also starts to blame herself for not being able to protect Chavel. Raelle tells her to stop, and Abigail says she didn’t think it was the Camarilla because Alder told her otherwise. Tally comments that they’re hunting her and says Alder is always lying and playing with someone else’s life. She gets up and storms out of the room, Raelle calling behind her. Tally walks across campus to Alder’s office and bursts in, “no more lies. Who is Sergeant Nicte Batan?”