Comic Review – Jedi Enter Into Negotiations with the Hutts in “Star Wars: The High Republic Adventures” #6 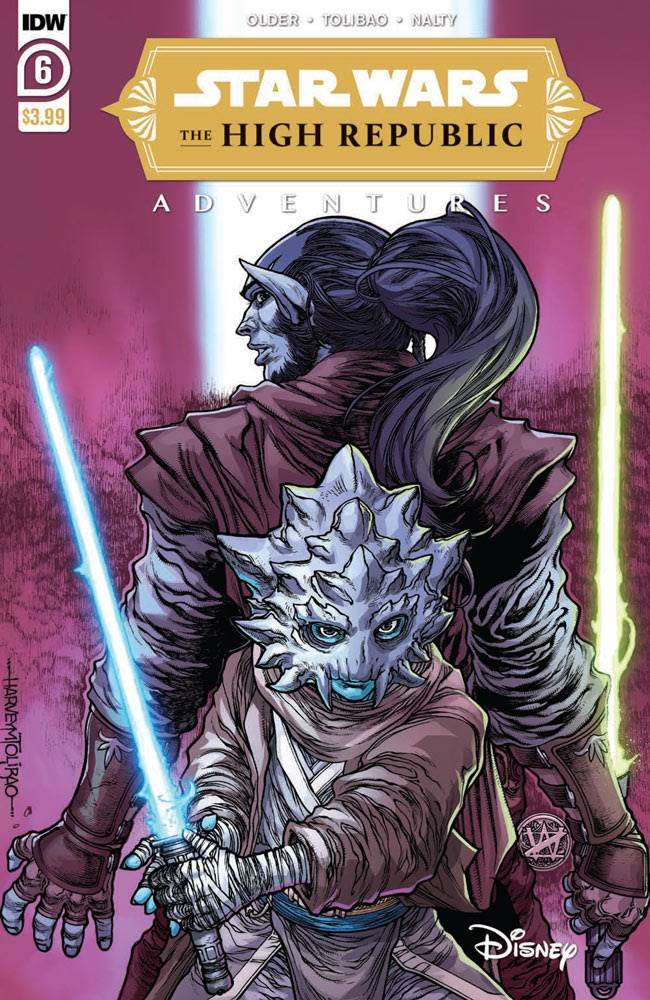 IDW’s Star Wars: The High Republic Adventures comic book began its second story arc this week with the release of issue #6, still written by Daniel José Older with art by Harvey Tolibao and Pow Rodrix. This issue, entitled “Mission to Bilbousa,” sees Jedi Padawans Farzala Tarabal and Qort traveling with newly introduced Master Obratuk to the Hutt homeworld of Nal Hutta aboard the Vessel to negotiate a peace treaty between the sluglike species and the Republic.

Unfortunately, upon their arrival Obratuk enters into an unforeseen hibernative state, and Farzala must enter into negotiations on his own, despite his young age. 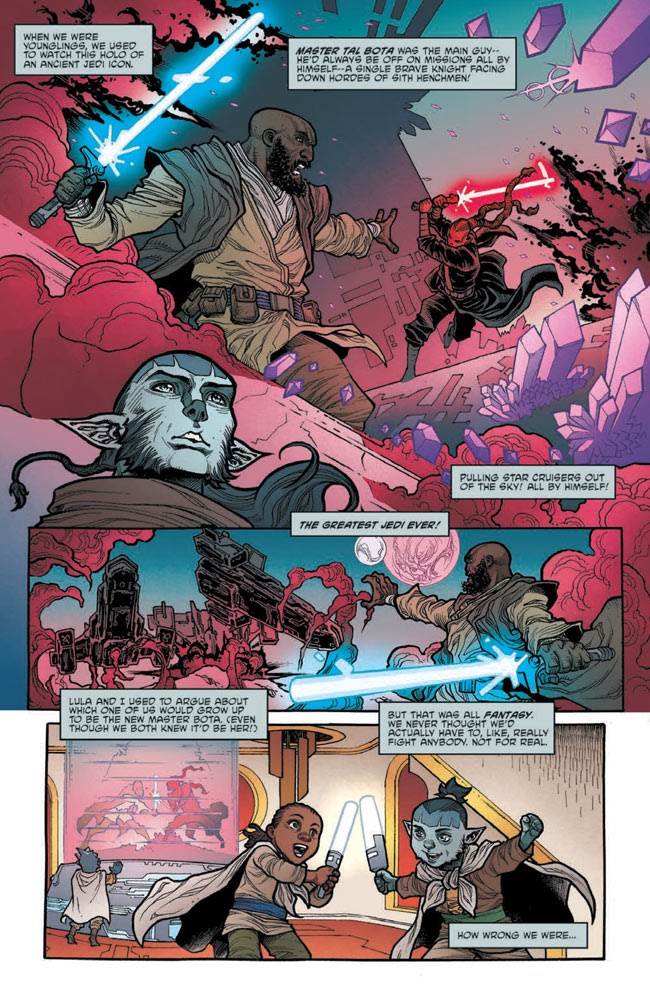 The story opens with flashbacks to Farzala’s childhood as he grows up training alongside fellow Padawan Lula Talisola enjoying holovids about a great Jedi Master known as Tal Bota, who they sought to emulate as they grew up. In the “present,” the Vessel (which first appeared in Claudia Gray’s young-adult novel Star Wars: The High Republic – Into the Dark) arrives at Nal Hutta’s capital city Bilbousa under the command of its owner Affie Hollow, pilot Leox Gyasi, and rock-like navigator Geode. With Obratuk fast asleep, Leox accompanies Farzala down to the planet while Qort stays with Geode and Affie to look after the ship– not to mention the unconscious Jedi Master. Sadly Farzala’s negotiations with Skarabda the Hutt come to an abrupt halt when the Vessel is hijacked by pirates working for another familiarly named gangster (in his first High Republic-era mention), and both teams must scramble to protect themselves from all manner of dangers, both in the sky above Bilbousa and in the tunnels of Skarabda’s gladiator arena. 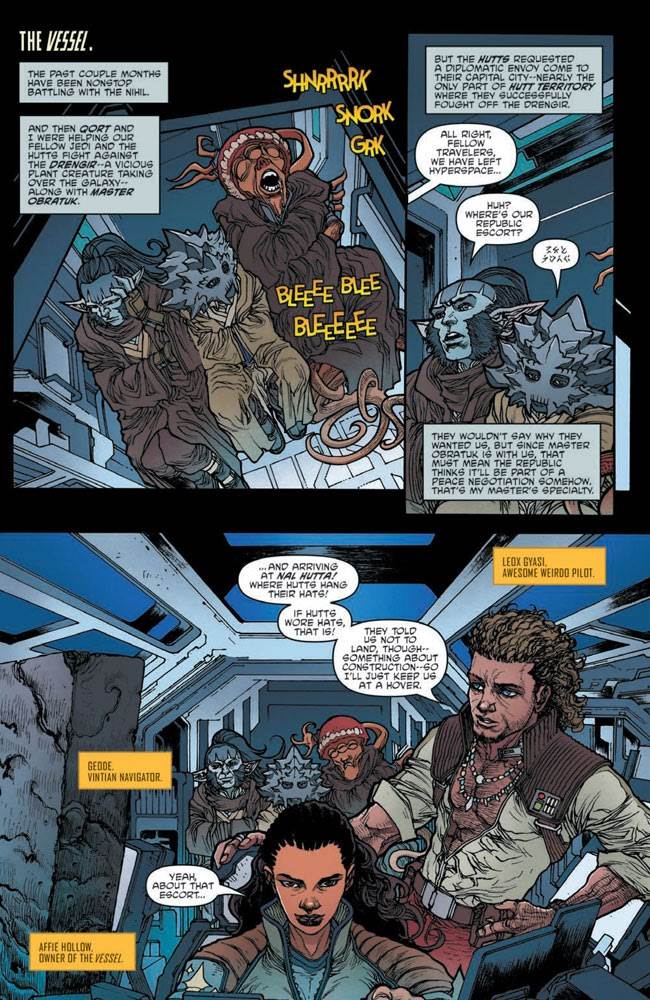 It’s great to see the crew of the Vessel depicted in a visual medium like this after only knowing them during the events of Into the Dark, though Geode and his evidently unknowable method of moving around remains a baffling enigma. I also loved seeing Nal Hutta as it appears during this period, and the surprise splash page featuring a strangely colored Rancor certainly lends itself to Older’s self-stated obsession with the fearsome creature first seen in Return of the Jedi. Jabba’s pirate crew has an instantly memorable droid character among its ranks, and the third-act intrusion by the Drengir definitely adds some additional danger into the mix as this team attempts to survive a treacherous trip into enemy territory. I genuinely think Daniel José Older and his talented artistic collaborators are doing a wonderful job of delivering the kind of action and fun interplay between characters that one would expect out of a kid-friendly Star Wars comic book, and this second arc of The High Republic Adventures is undeniably off to a great start. 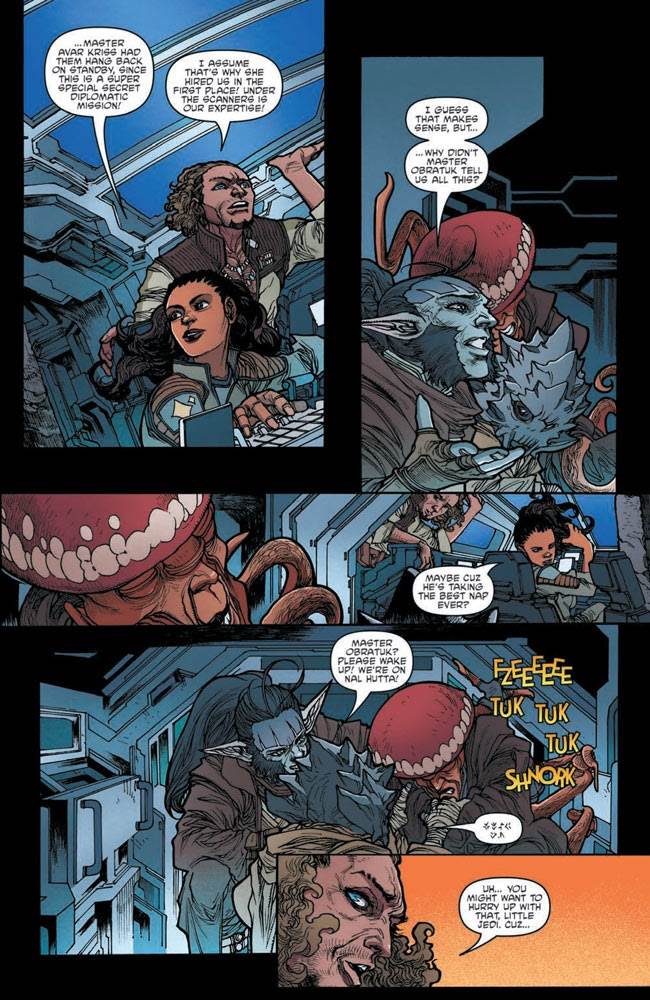