It’s the summer premiere of The Wonderful World of Mickey Mouse and the debut season continues with two new shorts, now streaming on Disney+. As always, we’re not only recapping the plot, but pointing out the Disney inside jokes that longtime fans will appreciate.

Mickey Mouse is out for a stroll when he is trampled by a mob of his neighbors on their way to tear down the haunted house at the end of the street. If it looks familiar, it’s because it’s from the classic short Lonesome Ghosts. 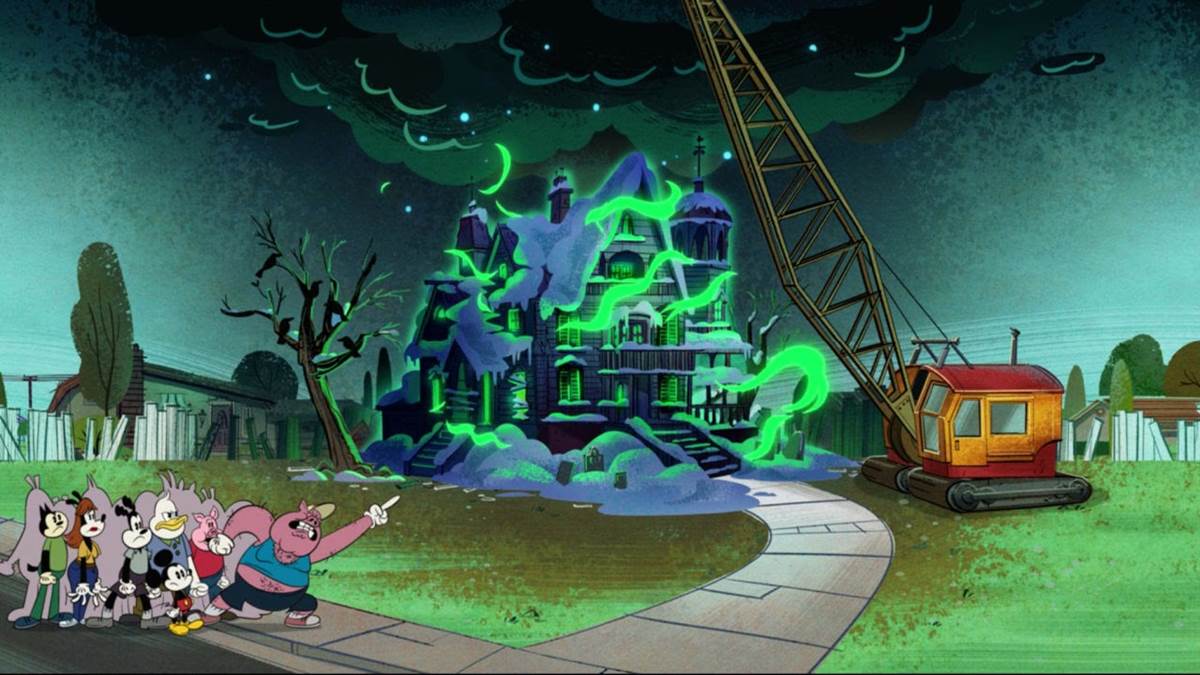 As the house is torn down, the three ghosts look dejected as they wander away homeless. Mickey takes pity on them as one of the ghosts mocks him by transforming his face into an angry skeleton whose face resembles the Hatbox Ghost from The Haunted Mansion. Mickey invites the ghost trio to live with him while they look for a new place. Entering Mickey’s house, their host goes upstairs to take a nap as the ghosts do some redecorating. When Mickey wakes up and comes back downstairs, he is horrified by what he sees. 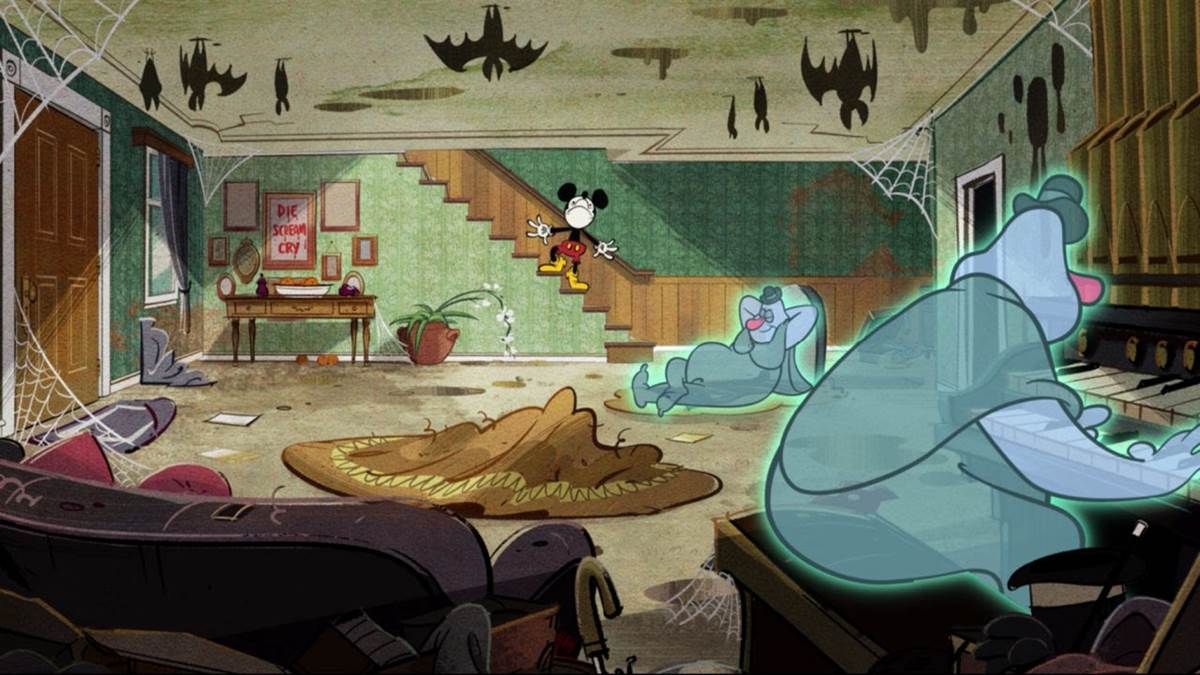 The ghosts also got Mickey a gift in the form of a rectangular hole in his floor and a tombstone with his name and likeness on it. In a montage of Mickey trying to go about his life with his new houseguests, when he picks up a bone for Pluto in the backyard, an entire skeleton (from The Skeleton Dance) comes out with it. Mickey gets out of the house for a bowling date with Minnie, who is concerned about her favorite mouse. When Mickey gets back inside, more skeletons have materialized and are dancing all over the place. Seance ghosts from The Haunted Mansion are playing instruments and gargoyle candelabras have been installed. 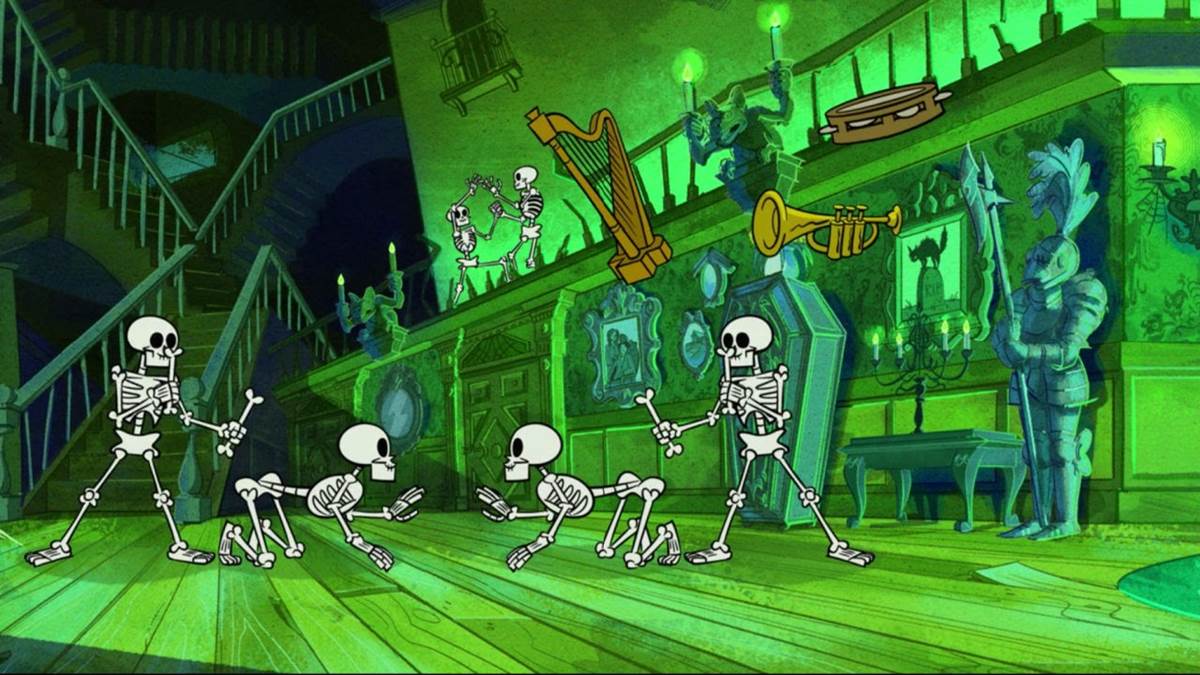 The ghosts are watching TV, flipping through the channels and Mickey interrupts as they land on Dr. Syn, Alias the Scarecrow. Mickey makes it clear that the ghosts should be looking for a new place to live, but they ignore him. When Minnie stops over with a plate of cookies and tells Mickey that he’s “Too sweet,” he gets an idea. 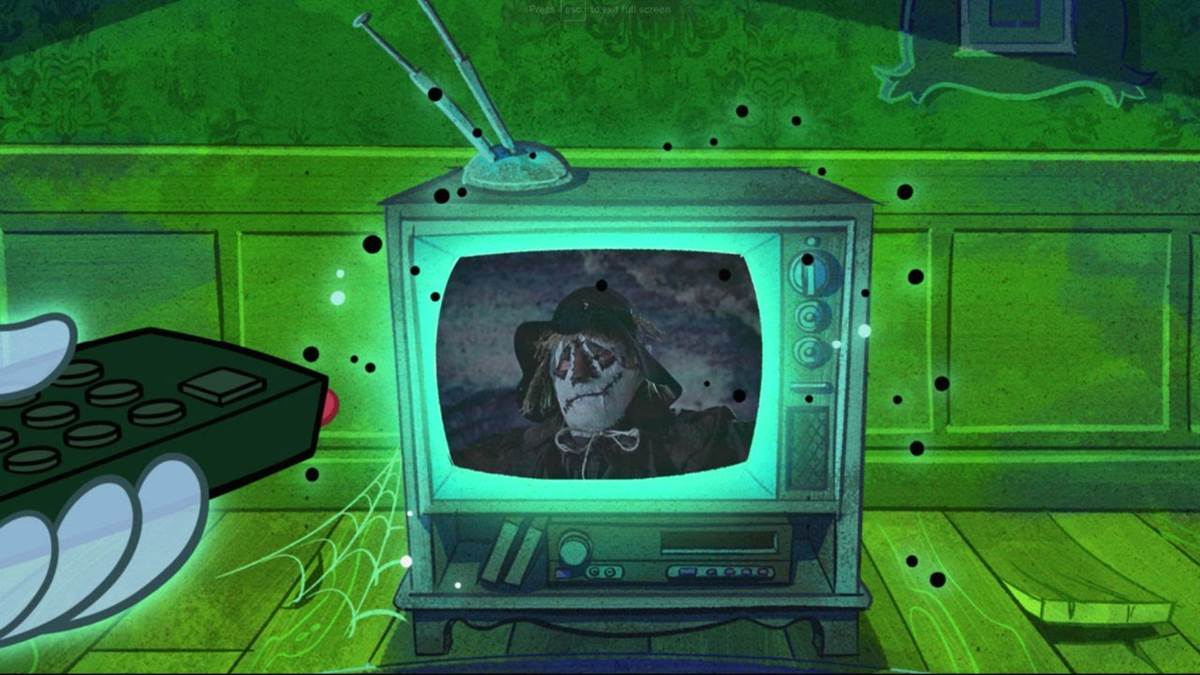 Redecorating his home in candy-colored pink and dressing in cute outfits, Mickey and Minnie sing a song about candy and scare the ghosts away. Later, Mickey and Minnie are out for a walk when a tree gets chopped down and a family of angry racoons become  homeless. Mickey wants to help them. Mickey and Minnie are vacationing on a small tropical island with the case of Walt Disney’s Enchanted Tiki Room. The birds, flowers and trees sing a song about “Island Rhythm.” The fun is interrupted by an angry storm cloud who is on its way to ruin the fun. Mickey and Minnie decide to build a shelter together, making bricks out of sand and using pieces of bamboo and palm leaves. The plants and birds seem like they’re trying to hinder, dropping rocks on the sand bricks and crushing them. As the cloud moves closer, Mickey and Minnie work faster, with Minnie becoming a video game character (ala Disney Crossy Road) and even leveling up in the process. Next, trees pop up and block Mickey’s efforts. In his quest to find a place to build, he runs into a wall of trees and temporarily turns into a Mickey waffle. While waiting for the storm to pass, the birds, flowers and trees resume their island song performance. The cloud tries to destroy the Enchanted Tiki Room from the outside and becomes small in its exhaustion. 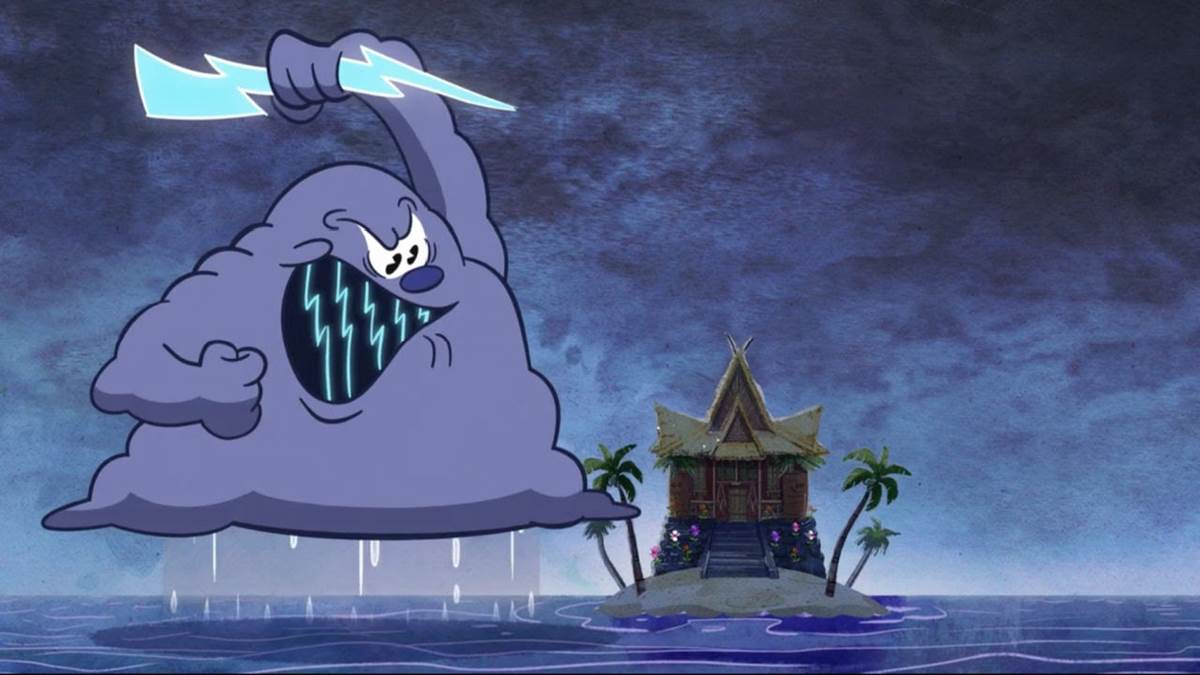 Now calm, Mickey and Minnie invite the cloud inside to enjoy the fun and frivolity. Until next time, “See ya real soon!”