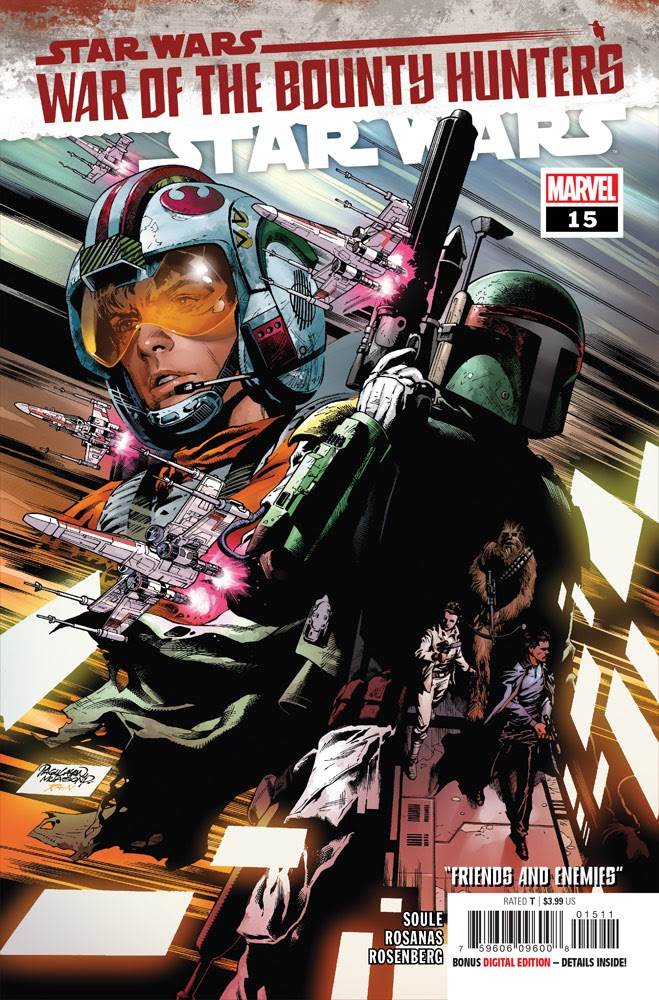 In Star Wars: War of the Bounty Hunters #2, which came out a few weeks ago, many of the protagonists (and antagonists) of Marvel Comics’ highly ambitious summer-long crossover event arrived at the same Crimson Dawn auction for the carbonite-frozen body of Han Solo. And then in this month’s issues of the individual Star Wars titles surrounding the crossover, such as Darth Vader and Doctor Aphra, the writers have rewound time a little bit to show us the events that led to these characters’ collision course on the planet Jekara.

The same is true for this week’s issue #15 of the second volume of Marvel’s main current-canon Star Wars comic, except in this case it feels a little bit more like a half-hearted detour to clean up a loose end rather than a true War of the Bounty Hunters tie-in. At the top of this issue, Luke Skywalker and his friend / fellow Rebel Alliance X-wing pilot Wedge Antilles exchange some expository dialogue about the current state of the rebellion during this time period set between the events of The Empire Strikes Back and Return of the Jedi. Then Luke references the auction and how he wants to head there to rescue his friend Han Solo after helping Starlight Squadron on a mission to reclaim another division of the rebel fleet. It feels like a perfunctory effort to acknowledge the ongoing War of the Bounty Hunters storyline while simultaneously dismissing it as the focus of this chapter, entitled “Friends and Enemies,” which gives the impression that writer Charles Soule was perhaps caught off guard with the ideas of having these titles overlap and instead chose to defer Luke’s arrival on Jekara in favor of a less-than-thrilling starfighter battle on the planet Ab Dalis– itself another reference to Soule’s work on Star Wars: The High Republic. The problem with getting so invested in War of the Bounty Hunters as a crossover is that I went in expecting all of the tie-in issues to expand upon that plot (this confusion isn’t entirely on me, however, as at least part of the blame can be placed on the branding at the top of each cover) instead of killing time with other stuff that feels somewhat less important to the narrative. Yes, this chapter ends– SPOILER ALERT– with the reveal that Luke and Wedge ended up rescuing Rebel Alliance leader Mon Mothma, and I did like the curveball of Luke’s vision interfering with his piloting and Force-targeting skills, but the eye-rolling idea of an Imperial Star Destroyer and its command crew not recognizing the danger of parking over a dormant volcano had me wishing Soule had come up with something less lazy as a concept. I get that it’s tough to tell a complete story in the limited amount of pages offered in a single comic book issue, especially when forced to have it connect to a larger sequence of events, but maybe that’s an indication that these tie-ins should lean in to their interwoven nature, not away from it. Star Wars #15 is available now wherever comic books are sold.