Author Emma Theriault’s Rebel Rose revisits one of the most famous periods in French history, combining it with Disney storytelling in a way never seen before. It is not simply a dreamed-up sequel to Beauty and the Beast, but a thoughtful, well-researched, historical fiction infused with Disney magic.

Rebel Rose is now available in both hardcover and audiobook formats. 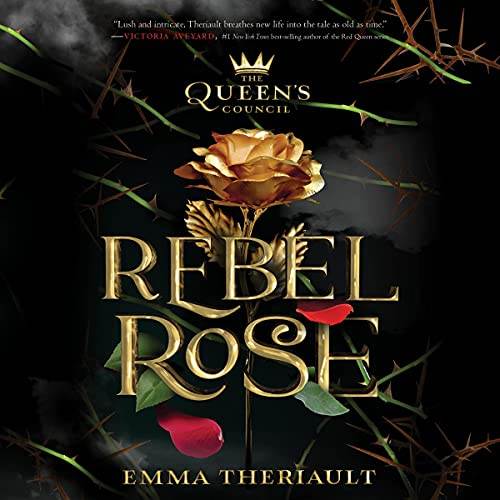 The audiobook is a delight despite one glaring weakness

My enthusiasm for the story – as evidenced in my earlier review of the novel – remains unchanged after listening to the audiobook. The audiobook will delight listeners despite one main inevitable weakness.

Rebel Rose is set in 18th century France. When it comes to stories set in different countries, especially those that include languages and accents different from the narrator’s native tongue, it becomes difficult to immerse oneself in the target country. While some languages and accents may be easier for non-natives to speak than others, French is not one of them. This is the only reason why I would suggest the novel trumps the audiobook. Our mind’s ear may be better at conveying an authentic French accent to us than an English-speaker’s dry pronunciation.

Pressley is an experienced narrator

Despite my criticism above, Rebel Rose’s narrator shines in many aspects.

Rebel Rose is narrated by Brittany Pressley who, according to the Amazon Audible website, has narrated some 338 books. Pressley has a pleasantly smooth and clear voice that makes it no chore to listen to her tell the tale. She also sounds enchantingly like Belle (who is voiced in the animated Beauty and the Beast film by Paige O’Hara), who is the star of the story, which makes her the perfect English-speaking narrator for this particular book.

Pressley also does a good job of other character voices. The voices are different enough from one another that the listener is always aware which character is speaking. They are not so forceful or dramatic that they detract from the story’s substance (this can sometimes be the case when a female narrator is narrating male character voices and vice versa). Pressley strikes an appropriate balance between distinguishing characters, on the one hand, and keeping the listener immersed in the story, on the other. Commendably, this remains consistent throughout the book.

Pressley’s pace, tone and pitch also make for great listening. The pauses between chapters and subchapters are made clear. I listened to the audiobook using the Author’s Direct program which broke the story down in tracks. While the numbered tracks did not always correspond to the number of the chapter, Pressley distinctly announces the beginning of each chapter. The tracks themselves also provide good stopping points for listeners should they not be able to make it to the next chapter before taking a break. The casual pace and tone will likely keep listeners engaged and curious about what comes next.

Rebel Rose in traditional novel format provides a more immersive historical reader experience than it does in audiobook format. While Brittany Pressley is an excellent narrator and possesses the perfect character voice for Belle, there is much more to Rebel Rose than just the protagonist. To maximize on the story’s French history, culture, language and accents, I would suggest the reader opt for Rebel Rose in traditional novel format to be able to truly immerse themselves in this exciting historical fiction.