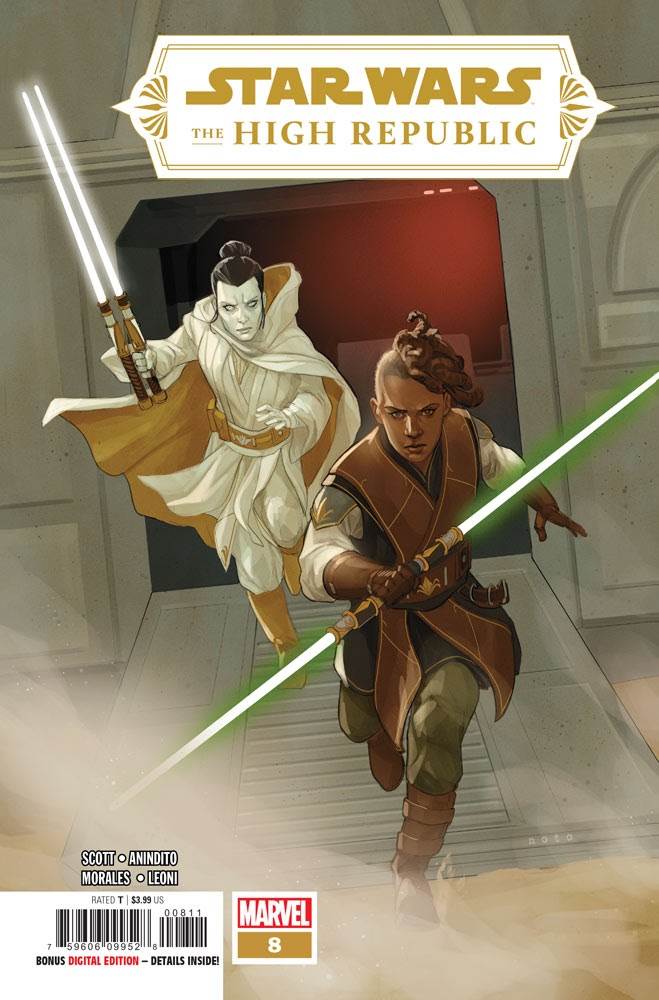 I’ve been saying a lot lately how Marvel’s Star Wars: The High Republic comic book, written by prolific author Cavan Scott, has become the Star Wars content I’m looking forward to the most each month. That exponentially growing level of anticipation has paid off in issue #8 of the ongoing series, which (evidently) brings a surprisingly early end to the Jedi’s conflict with the sentient dark-side plant creatures known as the Drengir.

The Drengir were initially introduced to The High Republic’s timeline in Claudia Gray’s novel Into the Dark, but shifted over to become the chief antagonists in the comic while the Jedi Knights in the books dealt with a faction of cutthroat marauders called the Nihil. 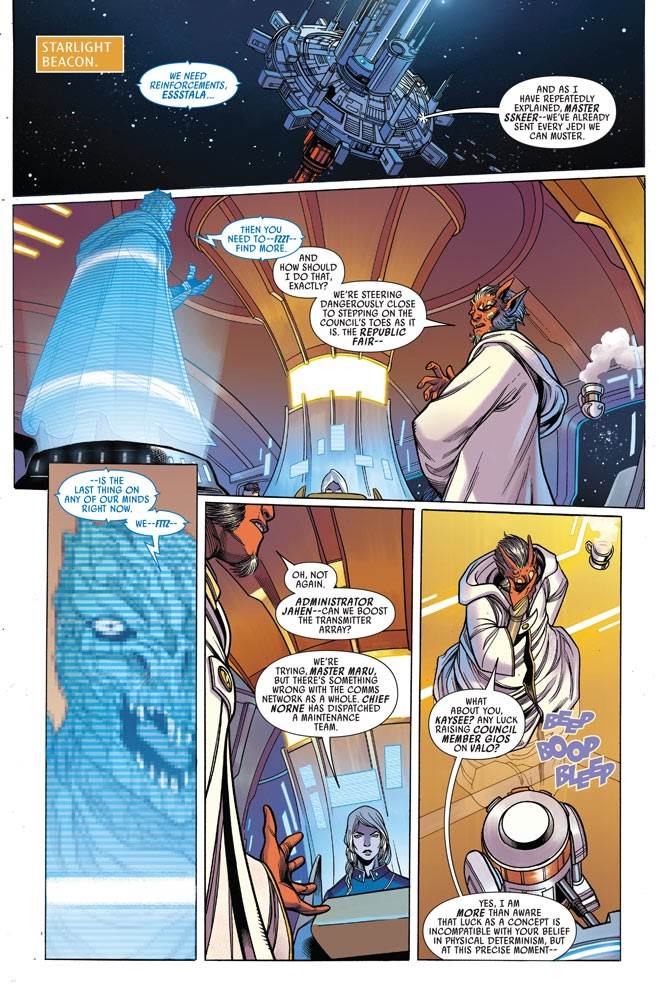 In Star Wars: The High Republic #8, out today, Marshal Avar Kriss of the Starlight Beacon space station has led an uneasy alliance of Jedi and Hutts to the “Wild Space” planet of Mulita, where a final showdown with the Drengir is about to take place. Naturally, Myarga the Hutt wishes to enact bloodthirsty vengeance on the plant-monster menace, but the Jedi quite literally seek to take a more enlightened approach. Scott’s writing is crisp and to-the-point as the Jedi struggle with a lack of reinforcements due to the imminent Outer Rim launch of the Republic Fair (see The High Republic: The Rising Storm for more on that event and its repercussions), and the artwork by Ario Anindito draws the reader in to the battleground with kinetic imagery accentuated by vibrant hues provided by colorist Annalisa Leoni. Of course there wouldn’t be much drama if the Drengir didn’t pose a genuine threat, exemplified by the worrying fate of Kriss, who at first glance has fallen under the villains’ influence much like Master Sskeer did in previous issues. But the Jedi Order of this era always seem to have one last trick up their collective sleeves, and we get some nice splash pages depicting a dramatic turn in combat that puts the enemy at a decisive disadvantage. 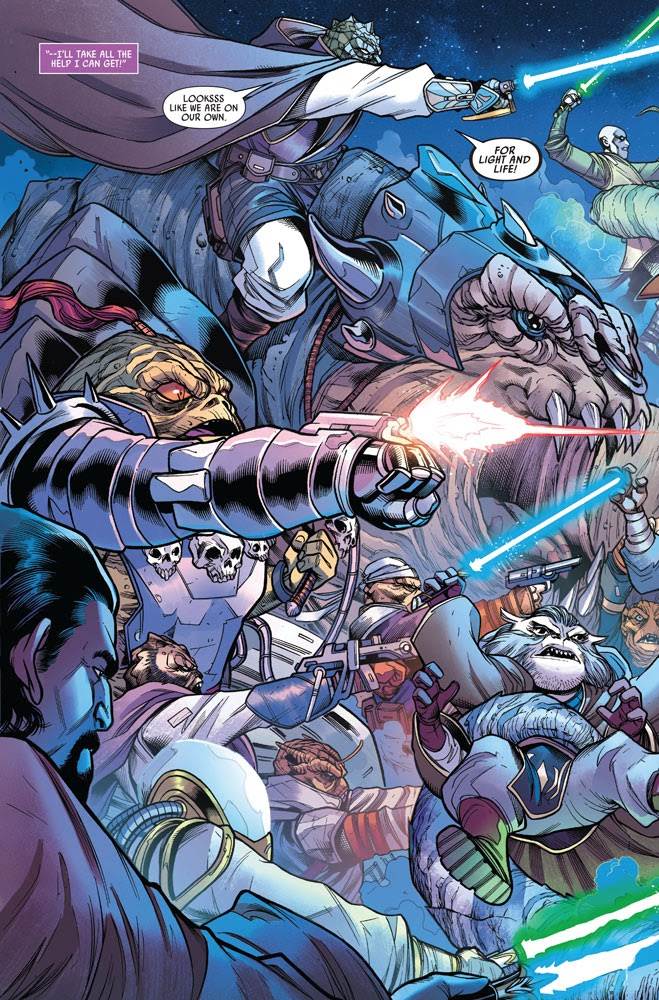 It strikes me as a profoundly bad idea for the Jedi to store the captured Drengir progenitor at Starlight Beacon, and I have a feeling we’ll be seeing the consequences of that sooner rather than later. In the meantime, the cliffhanger ending of this issue catches up with The Rising Storm by informing the comic-centric Jedi of what went down at the Republic Fair while they were off on Mulita. It’s interesting to have this side of the story fleshed out after having read the complementary novels in question, but what I’m really excited to see is what happens when the story progresses past the events we already know to have occurred. I’m also curious to learn more about Wayseeker Jedi Orla Jareni, as we didn’t get to spend a tremendous amount of time with her here after her comic debut last month, except for hints that she once had a physical relationship with Sskeer. I suspect The High Republic will eventually be delving a bit more into what it means to be a Wayseeker and how that path might affect one’s destiny as a Jedi, either in the books or comics. Until then, it looks like we’ll be dealing with the Nihil once again in the next issue, which should be pretty fun as well. 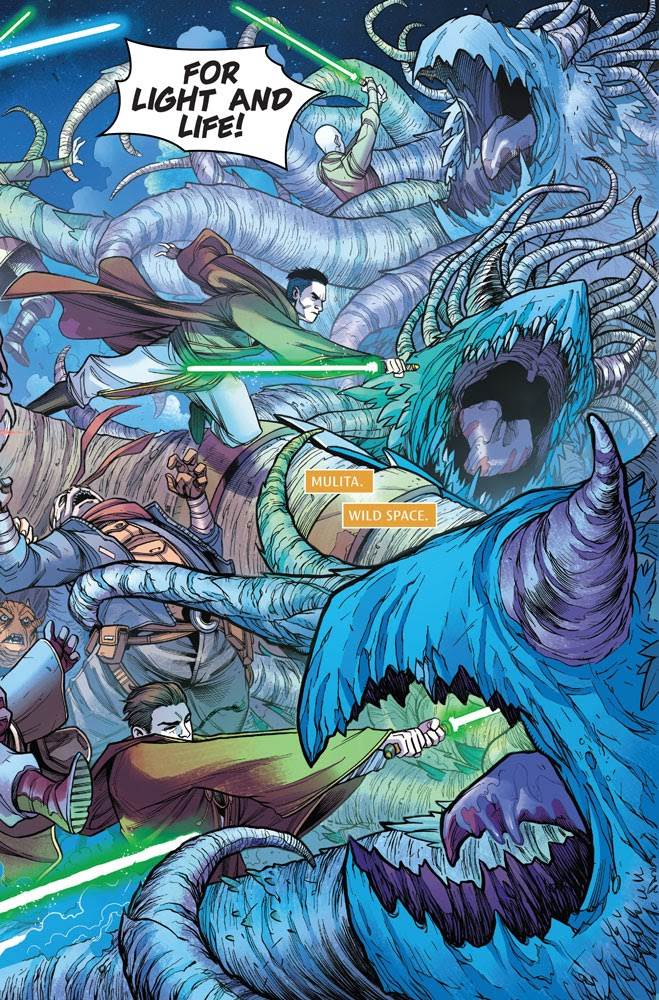 Star Wars: The High Republic #8 is available now wherever comic books are sold.