Got a case of the mid-week blues? Mickey and his pals will help turn it around with the two newest shorts from The Wonderful World of Mickey Mouse, “Bellboys” and “I Heart Mickey.” There aren’t a ton of Easter Eggs to be found here, but both shorts are still a lot of fun. Here’s a recap of each one. 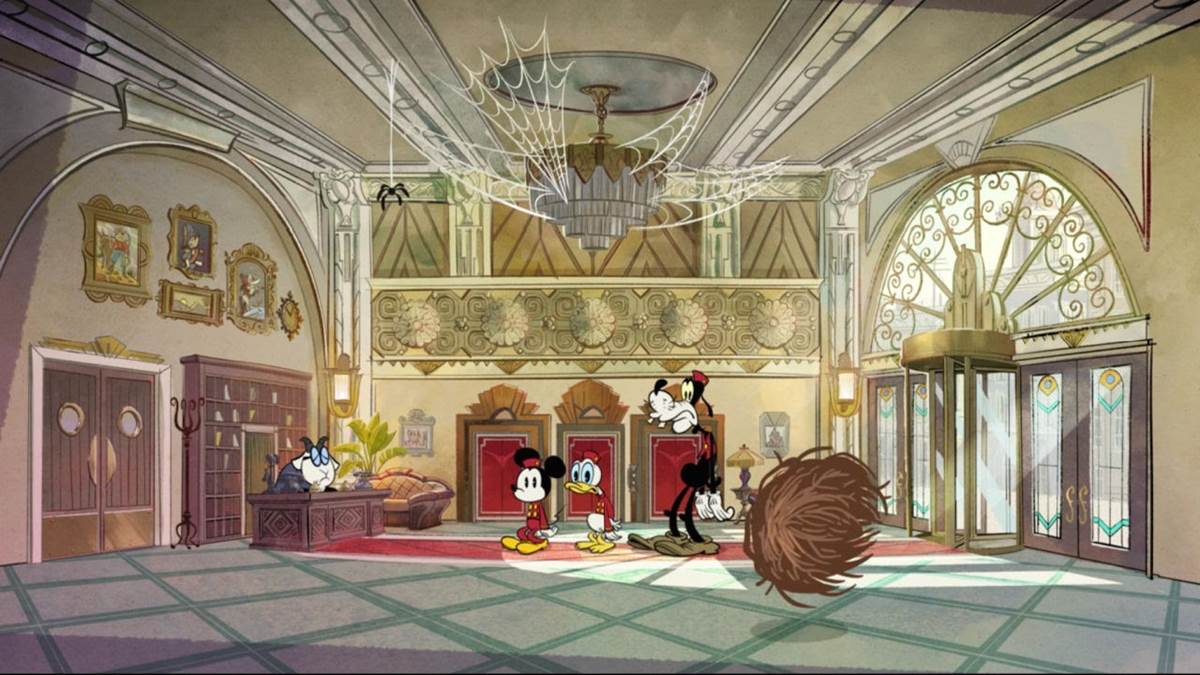 Mickey, Donald and Goofy have taken jobs as bellboys at a San Francisco hotel that is down on its luck (the lobby of which looks a lot like The Hollywood Tower Hotel from Twilight Zone: Tower of Terror). The owner is about to close the hotel due to a lack of business and decides to leave the trio in charge. Goofy points out that he doesn’t understand why nobody comes in because the sign on the door says “Open.” Mickey is the one who realizes that it’s backwards and flips it around. Almost immediately, a small car screeches into the lobby and a lion pokes his head out, asking if they have rooms and room service. When Mickey says yes, he opens the door and an entire circus of performers get out, including two pink elephants (they don’t look like the ones from Dumbo, but I imagine there’s a connection here). The only circus performer willing to let Donald handle their luggage is a gorilla, but it proves to be very heavy. Donald is unable to catch an elevator (probably smart if this is The Hollywood Tower Hotel) and has to take the stairs, which appear through the door of what should be a third elevator. Mickey takes food orders for Goofy, who reveals that the only food on hand is bread. Mickey stalls by checking in on the rooms but when he gets back to the lobby, he finds himself literally thrown into the circus act. While Mickey fields complaints from the ringleader lion about the long wait for room service, Donald manages to finally get the gorilla’s suitcase up the stairs. He looks swole at first, but quickly deflates, exhausted on top of the suitcase. The floor begins to crack and Donald is about to go for a ride all the way down through the hotel’s many stories. In the kitchen, Mickey is surprised by how much Goofy has made a lot of bread look like other foods. But… …Donald and the heavy suitcase crash down right on top of it! Goofy rushes to make more bread, but he swaps ingredients, like grape soda for baking soda, and uses his giant tablespoon. He gets anxious about the new dough in the oven and decides to peek inside, creating an explosion of dough that floods the lobby, drowning the circus animals. The lion pokes his head out and tastes some, loving it. All the circus animals do. 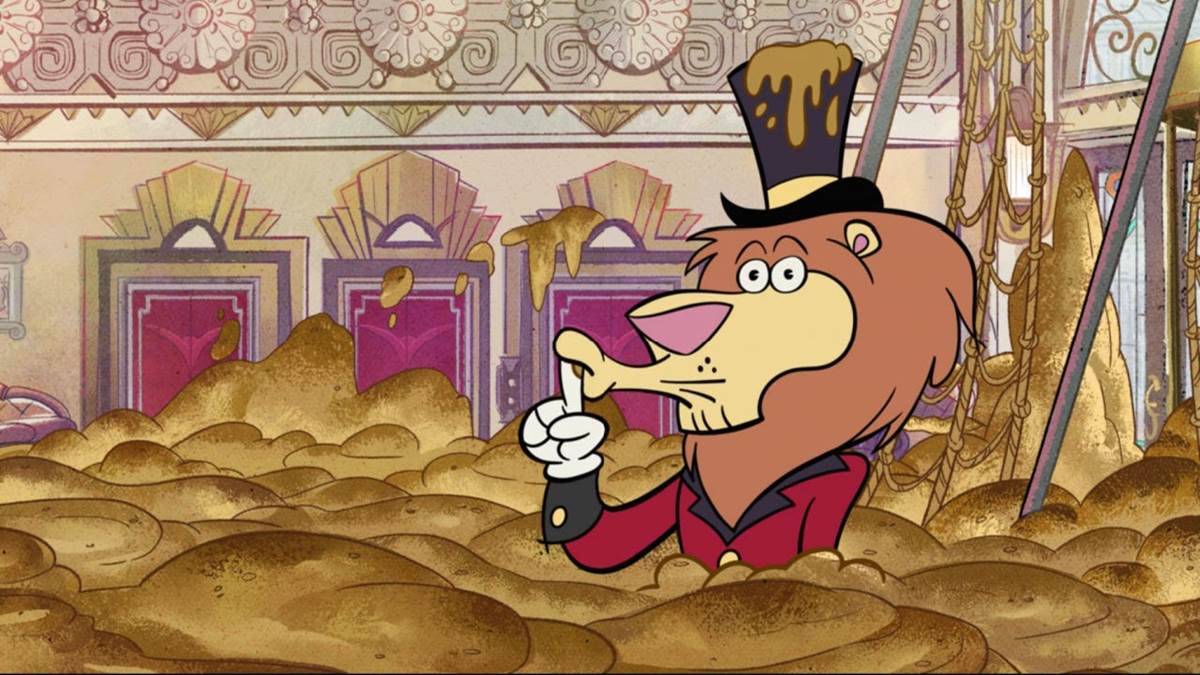 After eating all the dough in the lobby, the circus animals pile back into the tiny car and the lion leaves a huge wad of cash just in time for the hotel owner to arrive and rejoice. Just then, the door opens and a cowboy holding a reign walks in, saying he just needs a room for him and his horse. The owner tells him the bellboys will take care of them and exits just as the cowboy pulls on the lead and a giant trojan horse wheels in full of bulls. Goofy announces that he will go make the bread. 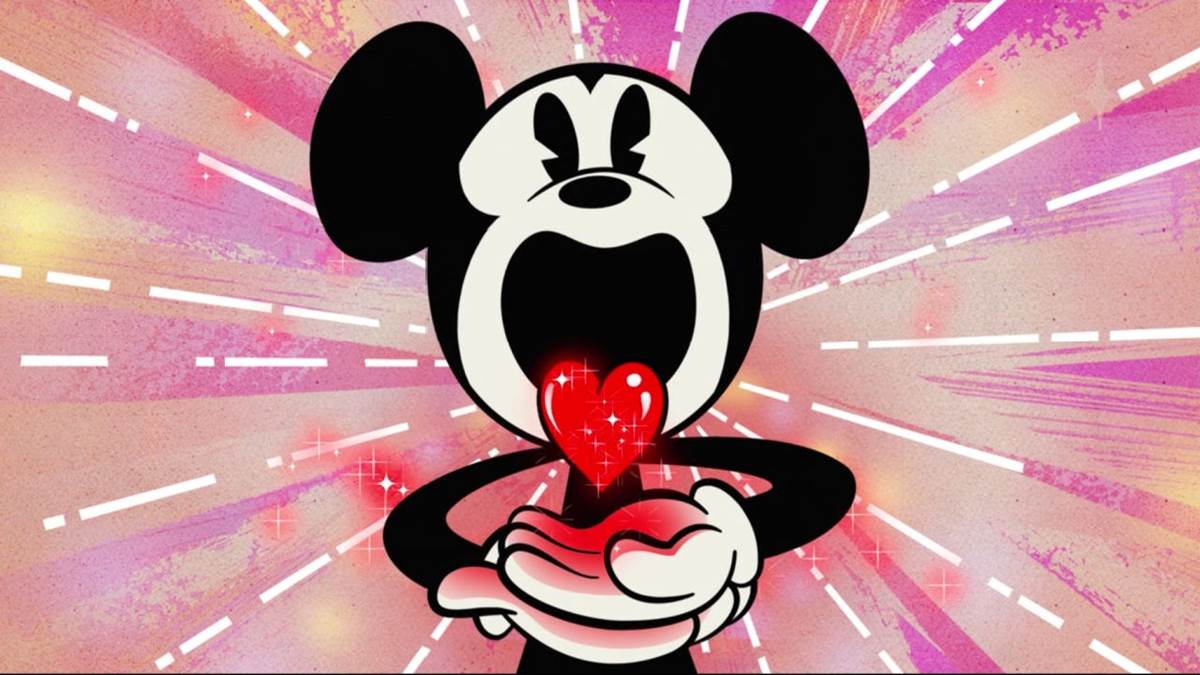 Mickey and Minnie are on a date and Mickey wants to give Minnie something special, but a red rose and a diamond ring (which he throws at a pigeon) don’t feel special enough. He summons up a big kiss, which causes his heart to sparkle and leave his chest, ending up in his hands. Minnie promises Mickey that she will keep it forever, but as he blows it her way… 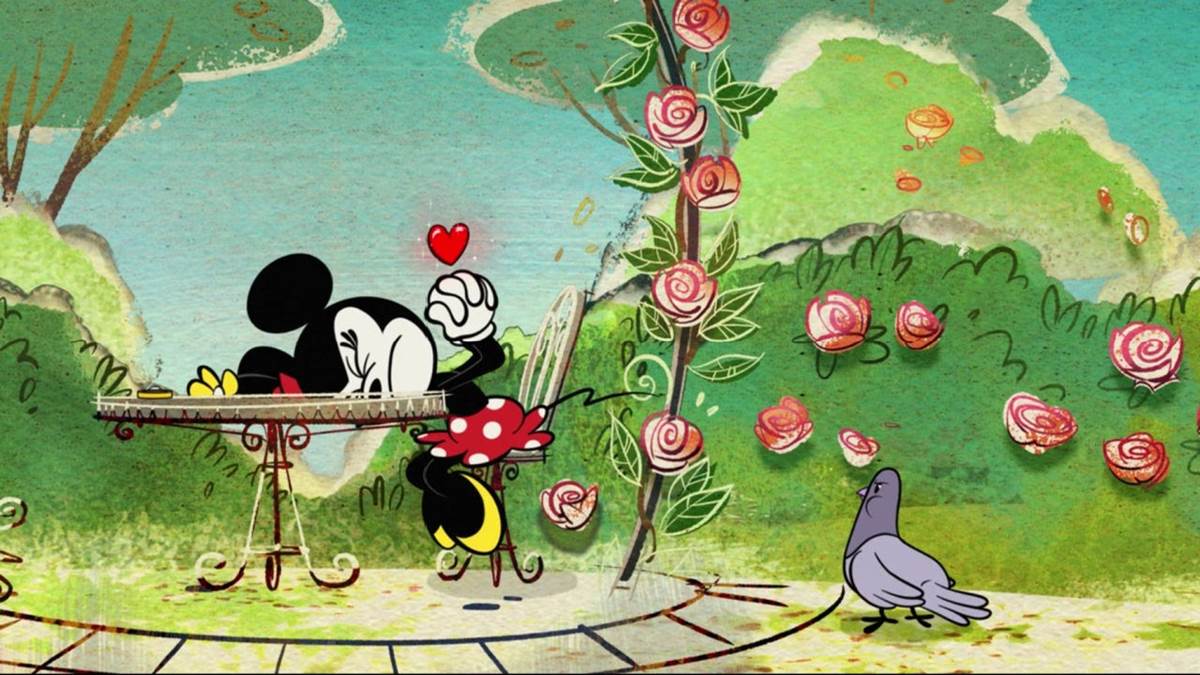 The pigeon throws the diamond ring back, which hits Minnie in the head and she misses Mickey’s heart, which sails over her head, crosses the street and attaches to a mailbox. Mickey doesn’t see any of this, he was distracted by the sudden appearance of a barbershop quartet (wearing Dapper Dans costumes). The heart causes the mailbox to become enchanted and it hops over to Mickey, dispensing love letters to him. While Mickey watches the quartet, Minnie pries the heart off the mailbox, which bounces into a furniture shop and lands on a recliner, which also comes to life. When it hugs Mickey and reclines, the heart and Minnie both get knocked through the ceiling, into the sky and they luckily land on Goofy’s prop plane. 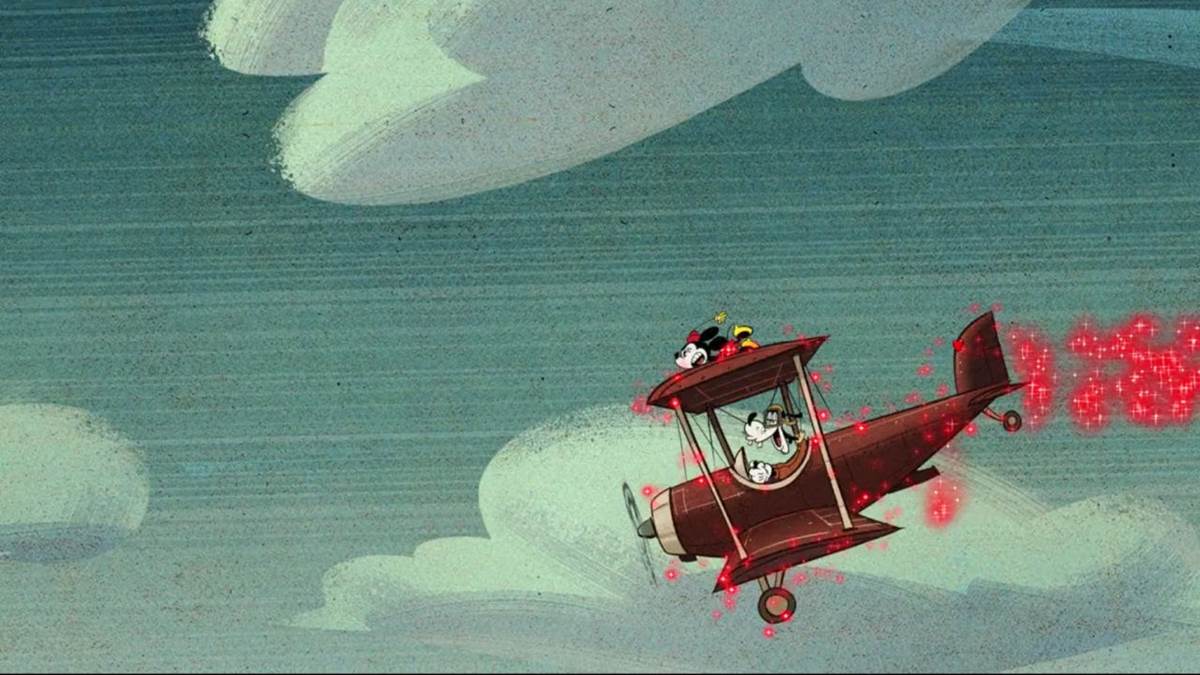 After getting the heart back in her hands, the plane dives and the heart falls through the propeller, breaking into lots of smaller hearts! Once again, Mickey is oblivious as a new barbershop quartet appears, this one also giving massages as they sing. With so many enchanted heart objects (and a citizen, Minnie feels hopeless. As she battles a lawnower, she and Mickey end up escaping down into the sewer. It’s there that Minnie confesses to Mickey what happened to his heart. But Mickey assures Minnie that she will always  have his heart. They return to the surface and Mickey acts as a beacon to attract the objects while Mickey uses a variety of methods to collect the hearts in her purse. 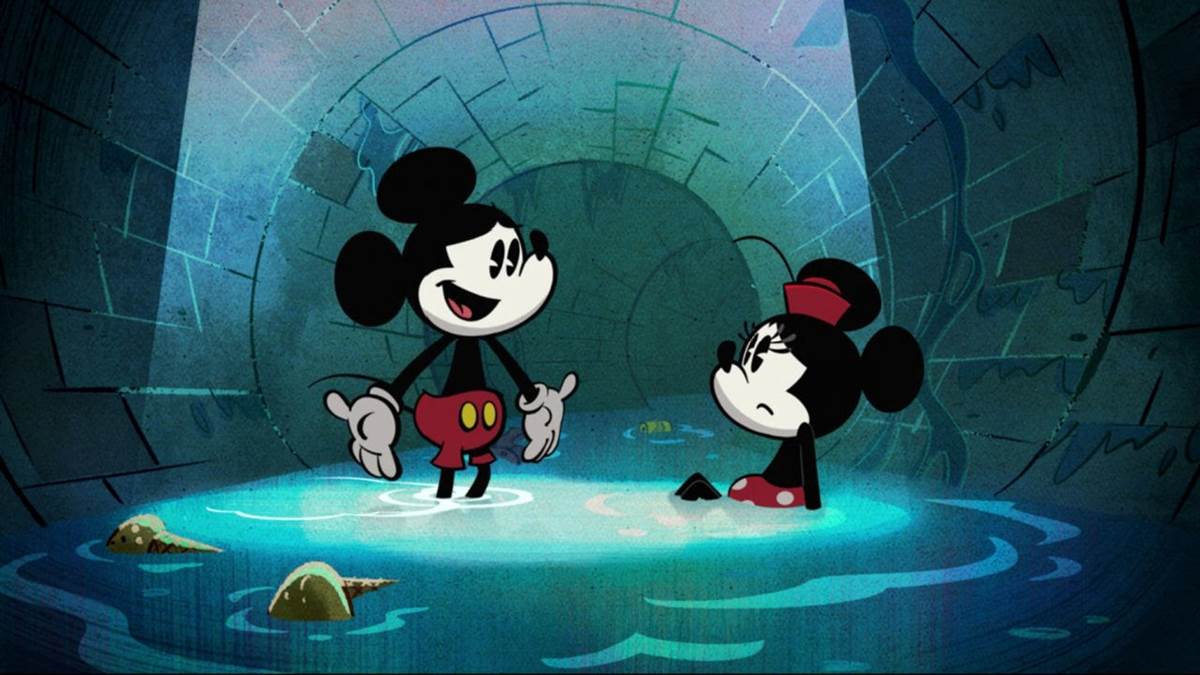 Just one heart remains to be found and it shows up pinned inside a medieval torture device from the museum, which chases after Mickey and Minnie. They both end up cornered down an alley. 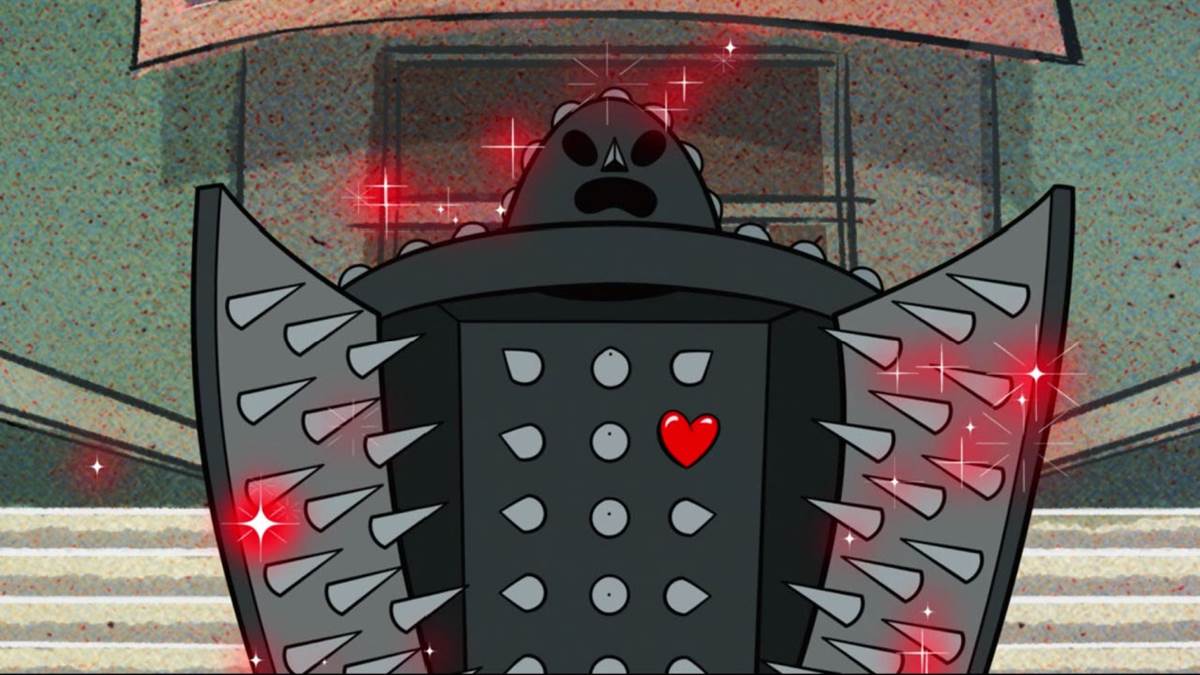 Mickey is able to talk the torture device into calming down and while he does so, Minnie punches her fist through the back, grabs the heart and combines it back together. This time, she opens up her chest, puts Mickey’s heart inside, and locks it with several different methods. 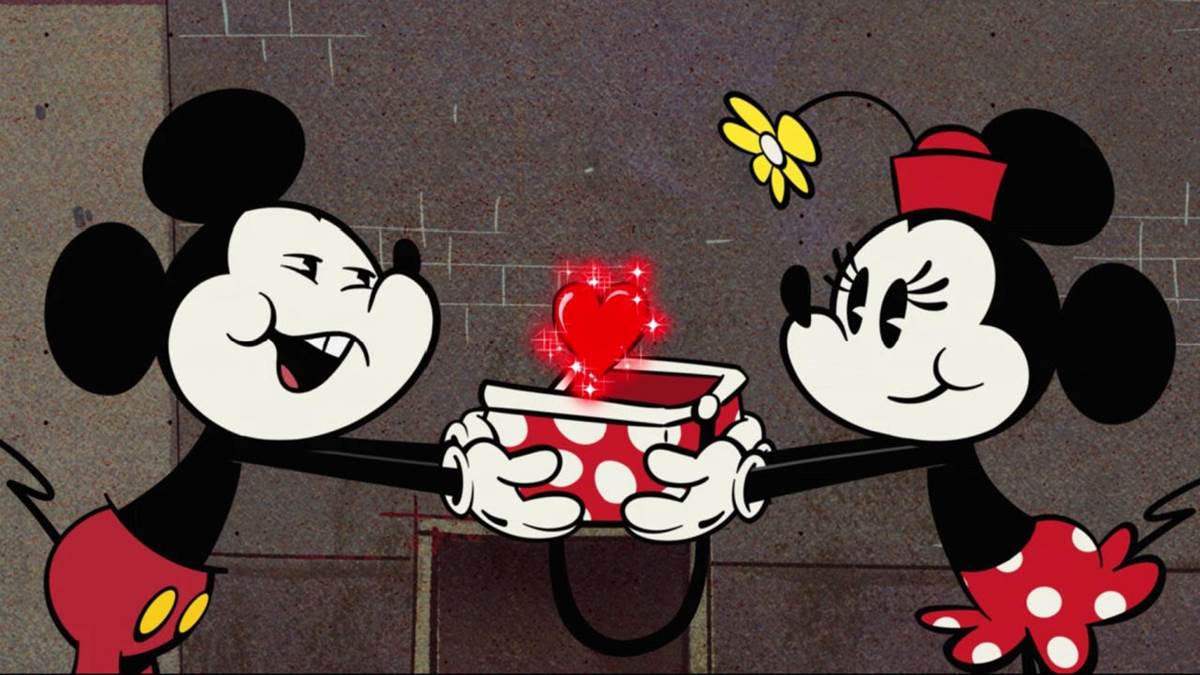 Two new shorts from The Wonderful World of Mickey Mouse will start streaming next Wednesday, August 18th, on Disney+.