As we explored the park today, we came across the new merchandise and just had to get some pictures! Dazzling blues, stunning golds, and of course plenty of iridescent coloring can be found throughout the entire collection. 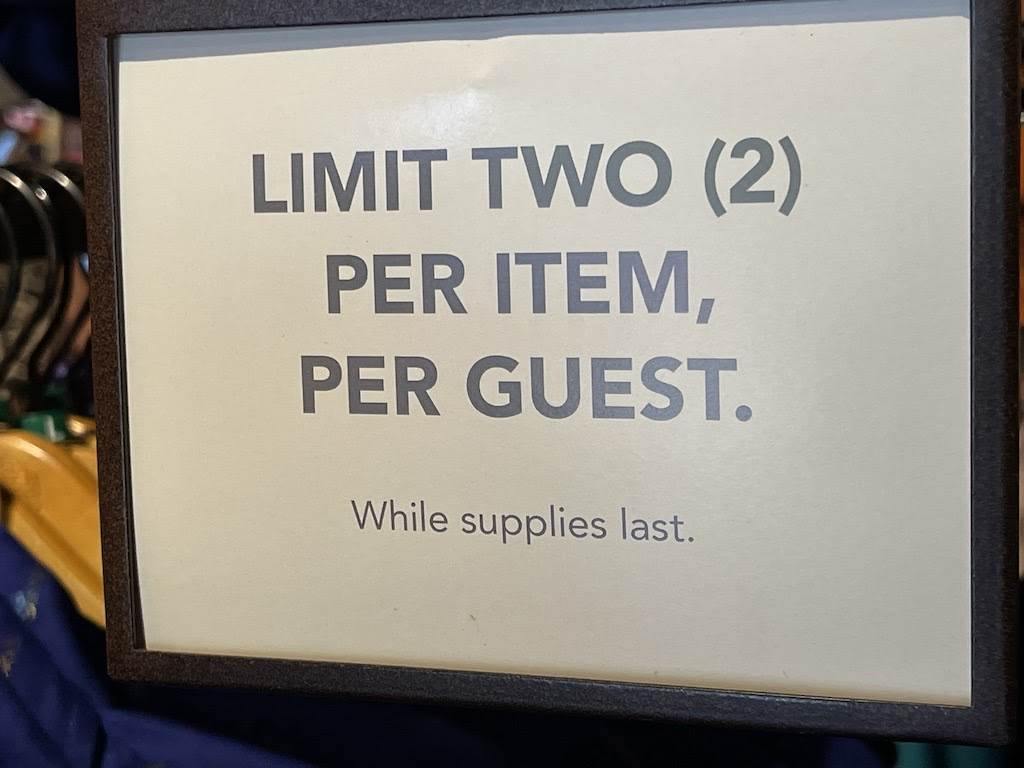 Guests visiting the park can shop all of their favorite designs, but are currently limited to purchasing only two (2) of each item. Let’s take a look!

Commemorate this milestone anniversary with a lovely framed lithograph of Cinderella Castle, the Partners Statue and evening fireworks at Magic Kingdom. The picture also reads “Walt Disney World 50 The World’s Most Magical Celebration.” It’s available for $49.99. Drink in the memories of 50 years of magic with the royal blue tumbler that sparkles and is iridescent! The double walled Corkcicle tumblers will keep your favorite beverage (hot or cold) at the perfect temperature for hours at time. Cheers! Bring yours home for $34.99. You can’t have a Walt Disney World merchandise release with a speciality MagicBand now can you? This royal blue design features a dolden Cinderella Castle with the number 50 and a “Walt Disney World 50” slider accessory. Its simple elegance perfectly complements every item in the entire collection. Sells for $39.99. 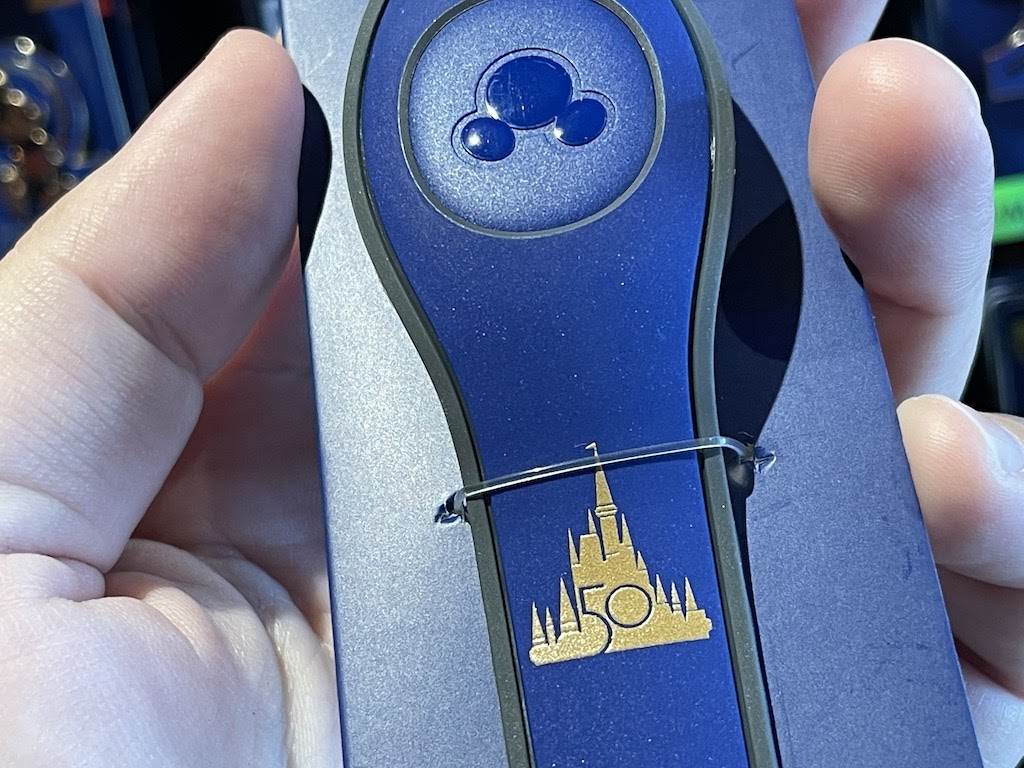 We’re in love with this Anniversary pin that showcases Mickey Mouse in one of his most iconic poses (hands behind his back, right foot out to the side) standing in front of the zero in “50.” Below him are the worlds “Walt Disney World The World's Most Magical Celebration.” The limited release pin sells for $17.99. Decorate your home or Christmas tree with this glass ornament dedicated to the anniversary celebration. A golden Cinderella Castle rests perfectly in the center and directly above the resort’s logo. And of course the magical celebration is noted too. The ornament is completed with a circular sparkling gold frame. $19.99 each. Hat’s off to the best vacation destination ever! Show your love for Disney with a blue baseball cap that features a light-catching golden Cinderella Castle patch on the right side and a gold foil Mickey Mouse silhouette on the side of the brim. The back has the resort logo and reads “The World’s Most Magical Celebration.” Each hat sells for $29.99 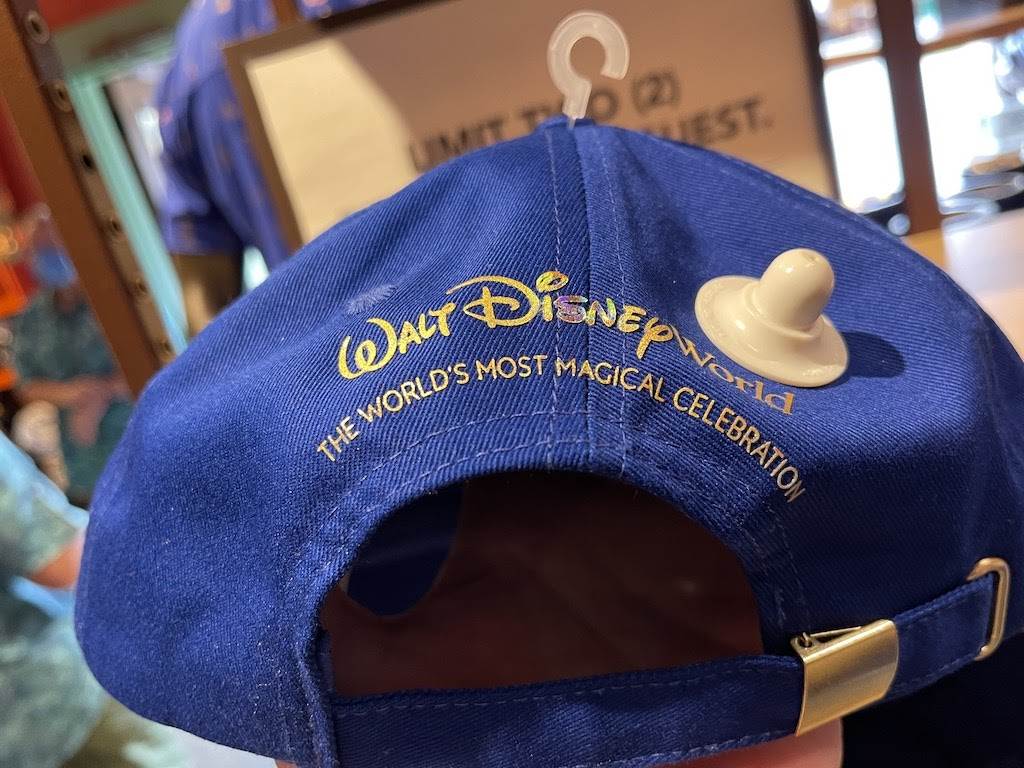 There’s a lot going on with this top and we love it! A delicate golden Mickey Ear silhouette makes the perfect background for a navy Cinderella Castle. In the middle of the castle is the Mickey Mouse in front of the “50” and below that is the WDW logo. Spelled out in an arch over the ears is the celebration message, and running down the entire length of the left sleeve is “Walt Disney World.” Finally to bring everything together, the shirt features a beautiful ombre white to royal blue material gives it an extra boost of elegance. This royal blue dress shirt is the perfect way to celebrate WDW’s 50th and works in both casual and dressy situations. The pattern of this top is nicely spaced out and includes iridescent icons of Mickey Mouse, “50,” “Walt Disney World,” and Cinderella Castle. Get yours for $64.99. For fans of this oversized, ultra comfy shirt craze here’s another design for your collection! The royal blue shirt is dotted with sparkly pixie dust throughout and the front side features an iridescent Mickey Mouse positioned on the left chest. But it’s the back where all the magic is taking place! The upper back extending to the shoulders reads “The World’s Most Magical CELEBRATION” in puffy iridescent letters and below it a large icon of Cinderella Castle, Mickey Ears and the number 50. The spirit jerseys sell for $79.99 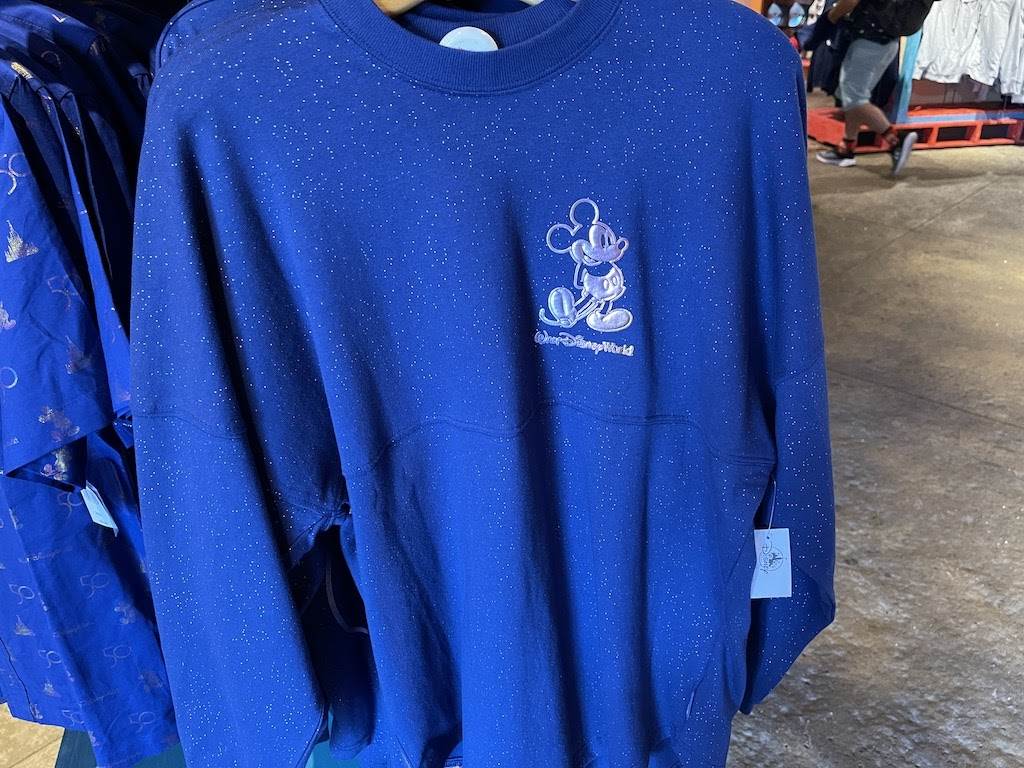 Fans can also shop a selection of white and blue t-shirts that feature gold or iridescent foil Mickey Mouse and special anniversary tags. There’s also a grey shirt with a small Mickey on the front and a large Cinderella Castle icon on the back. Shirts are priced between $24.99-$39.99. 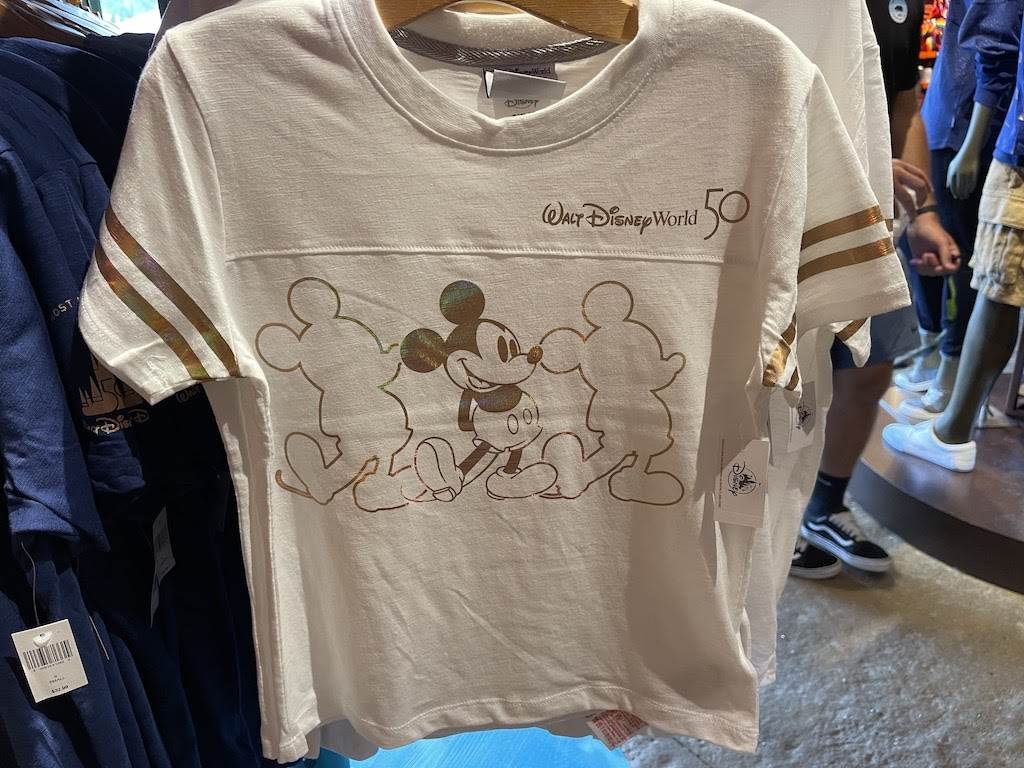 All photos courtesy of Jeremiah Good.