Industrial Light & Magic (ILM) gave a SIGGRAPH presentation all about the depth of work required to bring season two of The Mandalorian to Disney+ subscribers. More than 5,000 visual effects shots were done for this season, which required new technology to pull off. Some of the conversations were touched on in the “Making of Season Two” episode of Disney Gallery: Star Wars: The Mandalorian, but with much greater depth. 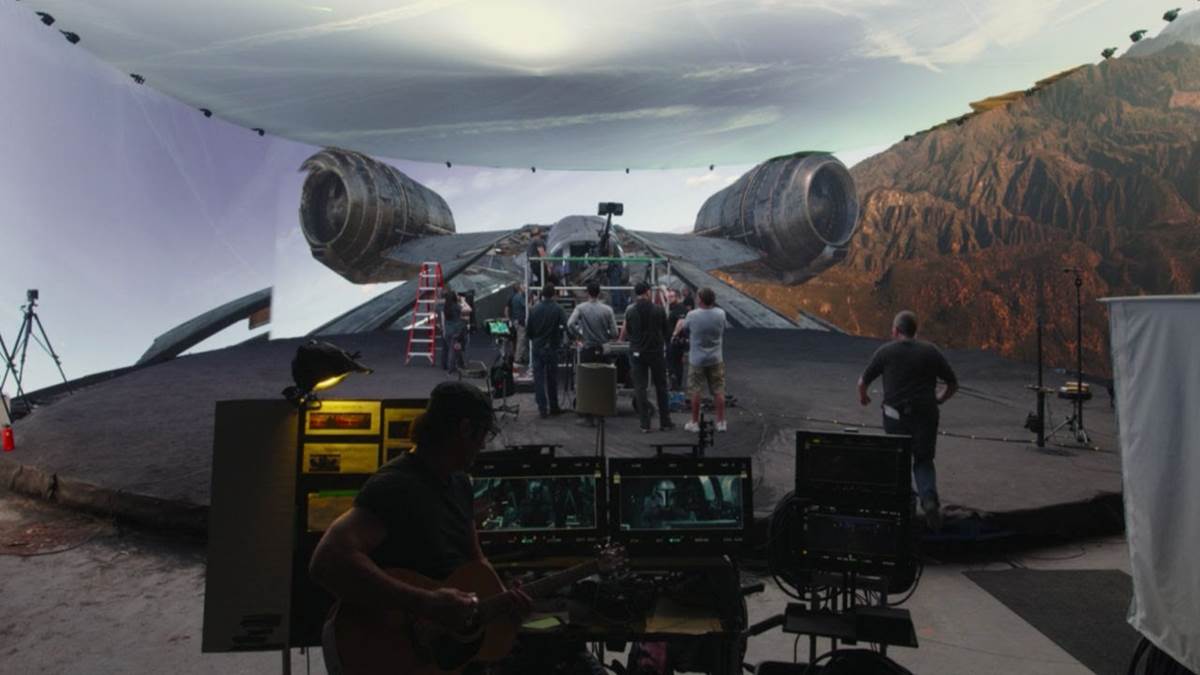 Abigail Keller, Visual Effects Producer for The Mandalorian, acted as a host, tying together the themes of the presentation. With an ambitious scope of work that has to be completed quickly and on the budget of a TV show, the only way season two could be successful was to previsualize every moment of the series. This allowed Abigail to be able to break up the post-production work into smaller pieces, giving teams the maximum amount of time to complete each scene.

Previs was completed by The Third Floor, with Jon Favreau getting all departments involved in the process so everyone could be on the same page from the start. This also helped increase collaboration across the entire project. This process also helped identify what would be among the season’s biggest technical challenges, the Krayt Dragon in the season opener. With the help of the work The Third Floor team did, the filmmakers were able to use digital tools on set to determine how large the dragon was and how far away it needed to be to remain in frame.

The Third Floor saved time by using a four person motion capture setup, which meant they didn’t have to keyframe every moment. Some of their work was so well done that Dave Filoni composed many shots based on this previs work, including the car chase through the Morak jungle.

Internally at ILM, the Krayt Dragon was several years in development. Visual Effects Supervisor John Knoll explained that one of the biggest complications was the way it was meant to interact with sand, a dense hard substance. The solution came from adding “Liquification” to the sand around the monster, allowing it to dive in and out of it. Jeff Capogreco also added notes about the experiments to determine the right amount of sand that falls off it when it rises up and the amount of dust debris it would create.

One of the Krayt Dragon’s weapons of self defense is acidic vomit, another tricky visual effect to get right. Being a family friendly show, it needed to be able to coat jawas and show that they were disintegrating without adding gore. The solution came from a simulation that would make the vomit form a layer of goo around its targets before steam effects were applied to indicate what was happening underneath.

Season two of The Mandalorian wouldn’t have been possible without ILM’s new virtual production tool, Helios. The in-house cinematic rendering engine meant that mile the pandemic prevented planned location shoots, the team was able to create them through LED environments that could be filmed in-lens. R&D Supervisor Rachel Rose shared that the new system can yield higher resolution and has an improved color spectrum, including deeper blacks. Tools also allow the cinematographers to be able to account for the lighting both on the practical sets and the LED extension, being able to save time in post-production by getting the final lighting in lens.

With Helios, the team could also make modifications to the digital set live if there were color differences, such as a light fixture that’s repeated digitally. They can even move literal mountains if they need to. However, some items still need to be refined in post, such as color grading the floor of a set to match or eliminating the edges of the LED walls and ceiling.

Helios also made it possible to photograph real elements and transform them into a digital world to extend sets. The interior of the rhydonium refinery on Morak started with photographs of a warehouse in Long Beach that was “Star Wars-ified” to become the digital extension. As for the junkyard, miniatures were created by hand, with 3D prints of Tie Fighter shells painted with a substance that quickly rusts. A tabletop was dressed and captured with photogrammetry, then duplicated in the computer to create the virtual set.

The scope of the second season of The Mandalorian expanded on the technical capabilities of ILM from just one season to prior. The presentation made me excited to see how they push the envelope in not only season three, but the other live-action Star Wars projects currently in development for Disney+.